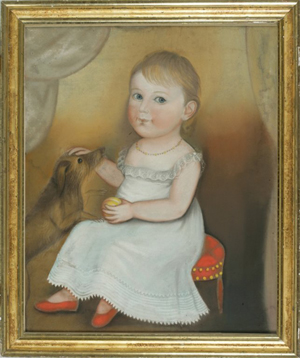 NEW YORK – On Jan. 22 Keno Auctions will showcase a remarkable selection of American paintings, furniture, folk art and decorative arts ranging from the 17th century to the 20th century. LiveAuctioneers.com will provide Internet live bidding for the 300-lot auction, which will begin at 10 a.m. EST.

The sale is composed of treasures and important examples of American furniture and folk art, including the Dr. and Mrs. Robert Isbell Collection, the Joanne and Jeffrey Klein Collection and the Kathryn and James Abbe Jr. Collection. Fresh property from several estates includes ethnographic, African, pre-Columbian, Chinese and Egyptian objects collected in the late 1930s through the 1970s by the late James M. DuPont (1912 1991). Descendants of one of the country’s earliest major collectors of Americana, Gov. Morgan Gardner Bulkeley (governor of Connecticut 1889-1893) are the consignors of an important Queen Anne cherry-wood chest on chest on frame (estimate $40,000-$80,000) with a rare scalloped skirt and original brasses and finials. The property offered in the sale is fresh to the market, of exceptional quality and conservatively estimated.

“It has been a joy to work with the collections assembled by the Isbells, Kleins and Abbes, for the great quality, rarity, condition and provenance of their pieces as well as the passion with which they lavished their attentions,” said Leigh Keno. “Having lived with such treasures in their homes, they pass along not only historical significance of peerless construction, but the sense of a living American tradition.”

THE ISBELL COLLECTION – Dr. and Mrs. Robert Isbell assembled their Americana collection with great passion for each piece. For more than three decades they sought out the best examples of high-quality American furniture and folk art. Two examples of Queen Anne furniture, each from mid-18th century Massachusetts, include a diminutive Queen Anne mahogany table with rectangular drop leaves (estimate $15,000-$30,000), constructed of the best quality highly-figured mahogany and featuring powerful, yet graceful cabriole legs. One of just a few Colonial tables in the world of this small size, it also retains much of its original finish. The Cox-Pickering bonnet-top mahogany high chest (estimate $80,000-$120,000) displays vertical proportions, a crisply scalloped skirt and shell-carved drawers. Its pedigree is impeccable, having descended directly from Timothy Pickering (1702-1778) of Salem, Mass.

Philadelphia Chippendale furniture from the 1760s is well represented in the collection by two pieces, each purchased more than 20 years ago by the Isbells. A rare Chippendale carved dressing table from Philadelphia (estimate $50,000-$80,000) displays rare acanthus leaf–carved front and rear legs and central drawer with naturalistic shell and flanking leafage attributed to the well-known carver Martin Jugiez. A Chippendale mahogany tilt-top piecrust tea table (estimate $30,000-$60,000), circa 1760, is a bold example of Philadelphia rococo furniture, displaying a crisply cut scalloped top and well-shaped acanthus leaf–carved cabriole legs.

The winsome colorful pastel Portrait of a Young Child in a White Dress and Red Shoes with Peach and Dog, by Deacon Robert Peckham (American, 1785-1877) (estimate $60,000-$100,000), executed in Massachusetts circa 1830, survives with its original glass and frame intact.

A charming portrait by Joseph Goodhue Chandler (American, 1813-1884) of a Young Girl Holding a Cluster of Grapes with Her Dog at Her Feet (estimate $12,000-$18,000) is an exceptional example of the artist’s work. The dog and its young owner, in a pink dress, appear to float inches above the ground.

Leigh Keno says, “We also have a family reunion of sorts with the charming double portrait (circa 1827) by the renowned artist John Brewster Jr. of brother and sister Marcia Bowman Winter and William Drew Winter of Bath, Maine (estimate $30,000-$60,000). It is serendipitous that a second Brewster-painted double portrait of their siblings, Sarah and Wealthy Winter (estimate $40,000-$80,000), was recently discovered in Maine and is consigned by direct descendants of the sitters.”

THE KLEIN COLLECTION – Collectors Joanne and Jeffrey Klein have assembled an eclectic mix of traditional American folk art, painted furniture and modern sculpture and paintings. Their love of form, color and texture is exhibited throughout their collection.

The Queen Anne salmon painted maple chest of five drawers (estimate $200,000-$300,000), circa 1800, attributed to Samuel Dunlap (1752-1830) Henniker or Salisbury, N.H., is the masterpiece of this collection. This bold form – a case of drawers raised on graceful cabriole legs –- most remarkably retains its rare and extremely desirable original salmon-red paint. The oval brasses are also original to the chest.

The Kleins assembled a spectacular group of Windsor armchairs with an emphasis on great form and excellent surface.

Typical of the quality of several weathervanes in the collection is the late 19th century gilt copper peacock weather vane, circa 1865 (estimate $5,000-$8,000) and a 19th century gilt copper leaping stag weather vane attributed to Harris & Co. Boston (estimate $5,000-$8,000) is symbolic of the Kleins’ whimsical sensibility towards collecting folk art.

THE ABBE COLLECTION – James and Kathryn Abbe shared a passion for photography, each with established professional careers, but they also loved art and antiques. Selections from their collection are represented in this auction and are featured by a rare carved and painted white pine figure of a gentleman, American, late 18th century (estimate $4,000-$8,000).

The Abbes loved carved and painted wooden and metal figures. A painted wood tin and iron figure of a rooster (estimate $1,500-$2,500), probably used as a roof ornament, is a whimsical accessory to any home. A portrait of a Girl in Painted Rocking Chair by Asahel Powers (estimate $4,000-$8,000) is a fine example of Powers’ work.

THE DUPONT COLLECTION – The James M. DuPont and Violetta J.P. DuPont Estate offers a stunning painting by William Trost Richards (American, 1833-1905) Gentle Surf, New Jersey Coast, 1905 (estimate $40,000-$80,000). This painting is of the last he completed and perfectly illustrates the broad sandy shelves of the New Jersey coastal terrain. In a lifetime of capturing surfs with oil on canvas, the New Jersey coast was one of his favorite subjects. 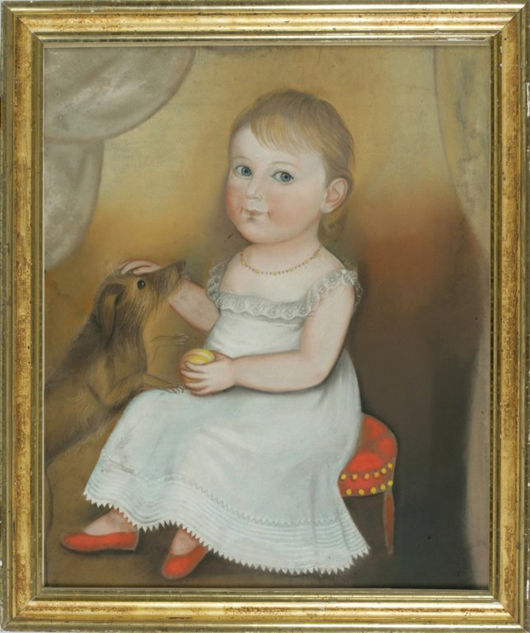 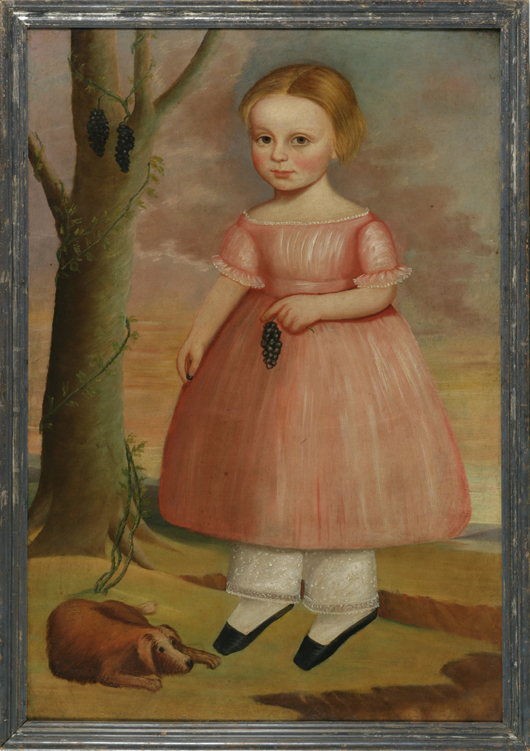 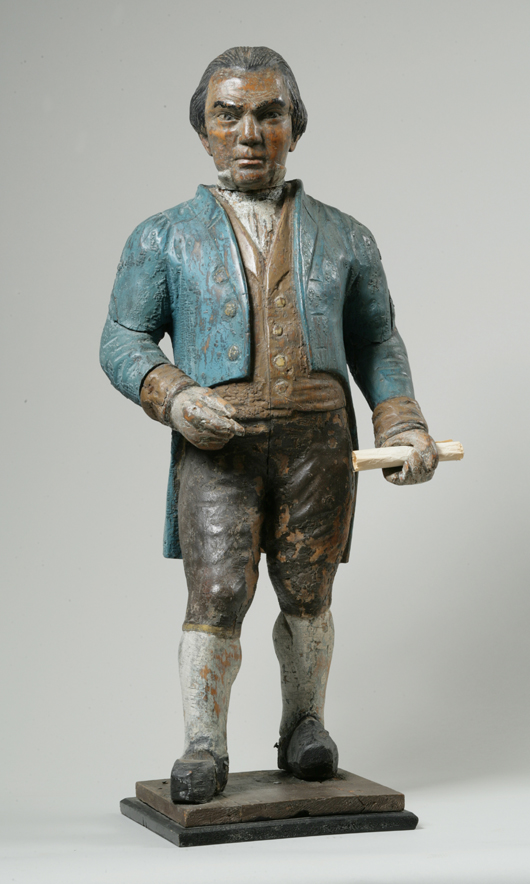 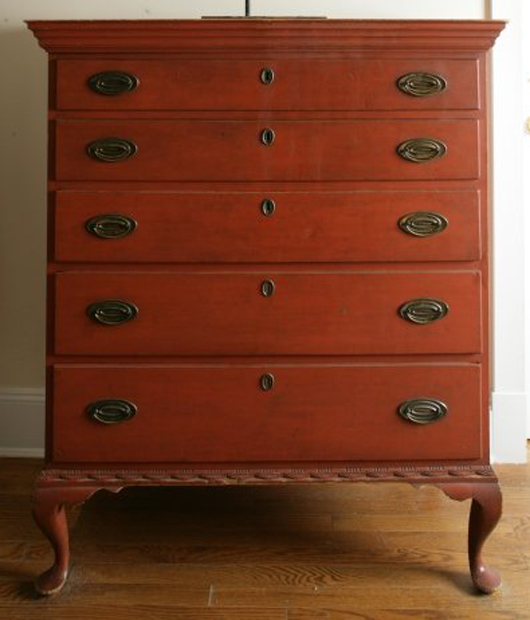 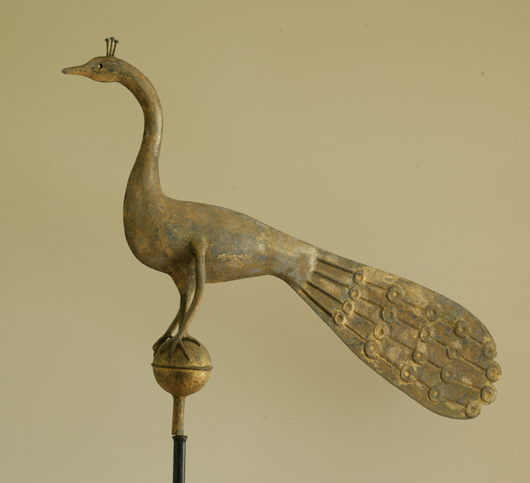 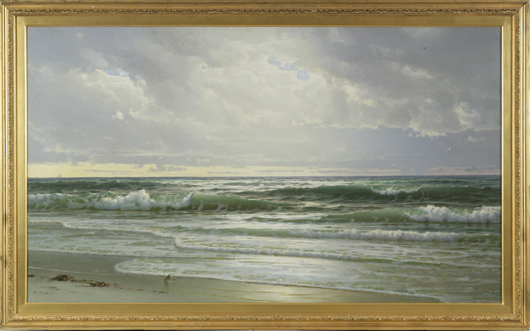 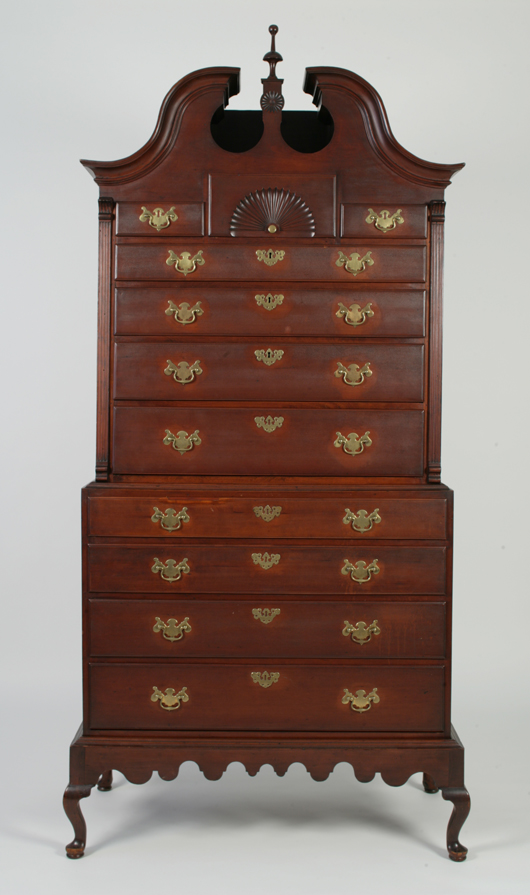