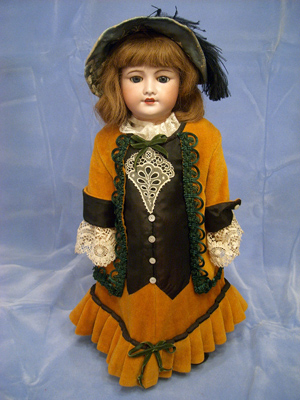 BLUE SPRINGS, Mo. – A nice single-owner collection of over 125 rare and vintage dolls – nearly all of them made in France and Germany between the late 19th and early 20th centuries – will be sold at auction Saturday, Oct. 23, by Browne Auction Specialists at the American Legion Hall in Blue Springs, just outside Kansas City. The sale will begin at 1 p.m.

Online bidding will be facilitated by LiveAuctioneers.com.

The collector died a year ago and her identity will not be revealed for security reasons until the day before the sale, per the wishes of her family. “But if we were able to give her name, it would be recognizable to people in the doll collecting community; that’s how highly regarded she was,” said Ron Browne of Browne Auction Specialists. “This is a rare opportunity to acquire some great dolls.”

The collection was amassed between 1970 and 1990 and includes manufacturers such as Armand Marseille, Borgfeldt, Heinrich Handwerck, Hertel Schwab & Co., J.D. Kestner, Heubach, Simon & Halbig, SFBJ, Cuno and Otto Dressel, Kuhnlenz, Bahr & Proschild, Unis and others. In addition, several Kewpie dolls made in America will be offered as a single lot.

Phone and absentee bids will also be accepted. Previews will be held on Friday, Oct. 22, from noon to 5 p.m., and on Saturday, Oct. 23, the date of sale, from 9 a.m. until the first gavel comes down at 1 p.m. Lunch will be provided on auction day.

Quite possibly the most plentiful dolls in the sale will be those made by the German manufacturer Armand Marseille, one of the world’s largest and best-known producers of bisque doll heads. The firm started in the mid-1890s and between 1900 and 1930 they reportedly made 1,000 bisque head dolls a day. The popular 370 and 390 molds will be featured in the sale.

Hertel, Schwab & Co. is another German manufacturer from the period that will be represented in the auction. Some of their dolls were made just for the American market (like Bye-Lo Baby for George Borgfelt, Our Baby and Our Fairy for Louis Wolf & Company and Jubilee Dolls for Strobel & Wilken. They also made bisque heads for other German doll firms.

The aforementioned George Borgfelt was based in New York City and was an importer and assembler of dolls for the American and Canadian doll markets. They were not doll makers themselves, but did hold distribution rights to many dolls from European manufacturers. Some, like the nice 25-inch bisque head doll with blue sleep eyes in the sale, are marked “GB.”

The Dressel family toy and doll business in Sonnenberg, Germany, operated for a long time and passed from one generation to then next before finally becoming known as the Cuno & Otto Dressel Factory in 1873. They purchased bisque doll heads from several manufacturers. An example in the Oct. 23 auction is a 17-inch doll with a kid body, bisque head and big sleep eyes.

Heinrich Handwerk dolls were produced in Germany from 1876 until the company was bought in 1902, by Kammer & Reinhardt. They were best known for their bebe dolly-faced bisque heads, child dolls and babies, but they also made celluloid dolls, too. Featured in the auction will be lovely 24-inch and 26-inch dolls with composition bodies and bisque heads.

J.D. Kestner, also from Germany, began making papier-mâché and wooden dolls as early as 1820. The firm became such a major employer in the region it became known as King Kestner. Many examples of Kestner dolls will cross the block Oct. 23, most of them ranging in size from 24 inches to 36 inches and featuring composition or kid bodies, bisque heads and sleep eyes.

Simon & Halbig (S&H), founded in Germany in 1839, began making dolls in 1869 at two factories and became known for their fine bisque doll heads and innovations in the doll industry. They also supplied doll heads to other well-known manufacturers. The firm was sold in 1920 to Kammer & Reinhardt. Bidders will have a nice selection of S&H dolls to choose from.

Bahr & Proschild began in 1871 as a porcelain and doll factory and quickly earned a reputation as a maker of high-quality dolls. They discontinued operating around 1919 when they were acquired by the Bruno Schmidt Doll Co. Most Bahr & Proschild dolls are 7-24 inches in height. One in the sale is am 18-inch bisque head doll with bent limbs.

Hertwig & Co. manufactured porcelain dolls and figurines in Germany from 1864-1941. They are best known for their all-bisque Snow Babies and Nanking Dolls, with bisque heads and limbs and cloth cotton-stuffed bodies. Also, exclusive to the American market were the Pet Name china head dolls, several examples of which will cross the block on Oct. 23.

The Heubach family of Germany operated a long-standing porcelain business before getting into dolls in 1910. They made character bisque socket or shoulder head dolls, either molded hair or wigged, with sleep eyes or their famous painted intaglio eyes. In the sale will be a 9 1/2-inch Gebruder Heubach doll with composition body, bisque head and molded blond hair.

Other manufacturers that will be represented in the auction include Theodor Recknagel, Porzellanfabrik Mengersgereuth, Schoenaw & Hoffmeister, Hamburger & Co., Rheinische Gummi und Delloid Fabrik Co., Gerbruder Kuhnlenz and C.M. Bergman-Wafterhausen. Browne Auction Specialists LLC has been selling items at auction for over 30 years. The company is headquartered in Tulsa, Okla. 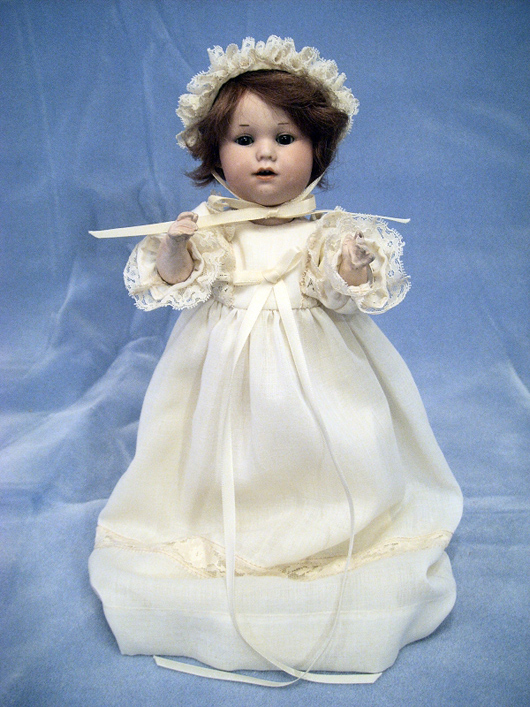 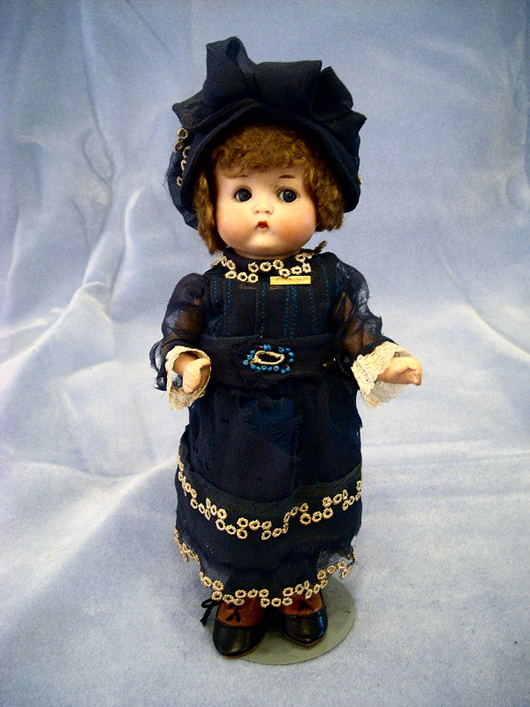 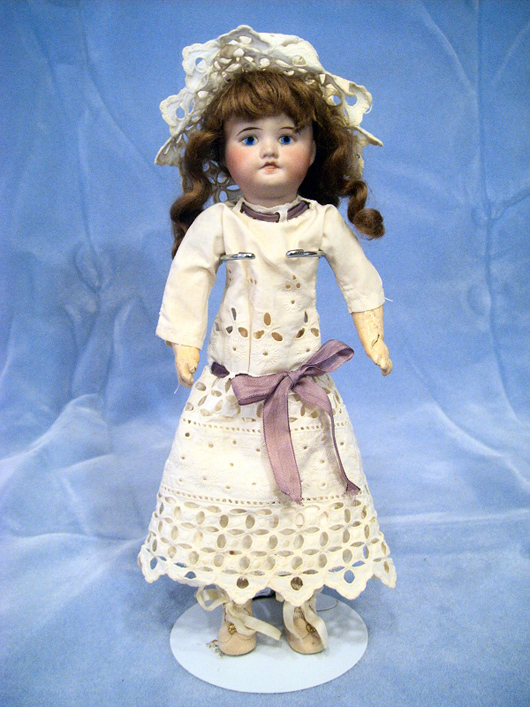 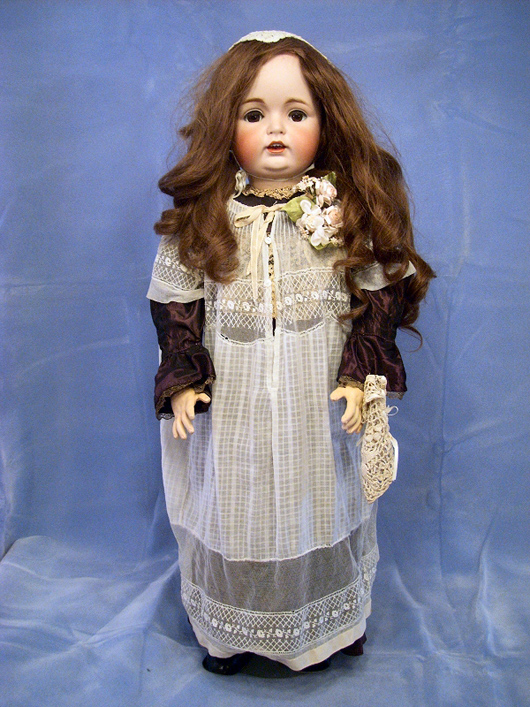 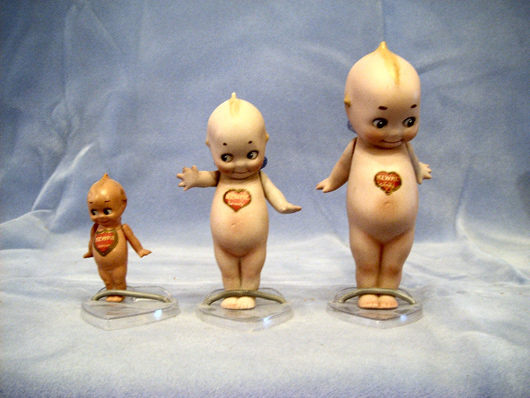