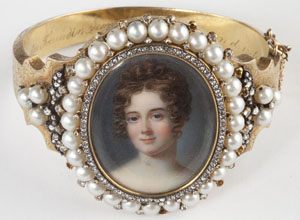 HILLSBOROUGH, N.C. – Nearly 650 mostly fresh-to-the-market lots in a dizzying array of categories will be offered at a two-session weekend sale slated for Dec. 3-4 by Leland Little Auction & Estate Sales Ltd. The auction will be conducted in the firm’s new gallery at 620 Cornerstone Court. Online bidding will be facilitated by LiveAuctioneers.com.

“We have been fortunate to be concluding a terrific year in what has been an admittedly down economy,” said Leland Little of Leland Little Auction & Estate Sales Ltd. “In fact, we posted back-to-back record quarters, and for that we’re very proud. The team has worked hard all year, and this December sale is another reflection of our ability to attract quality consignments.”

The action will kick off Friday evening, Dec. 3, at 6 p.m. (following a daylong preview) in a session dedicated entirely to fine wine. It’s a category the firm has carefully nurtured along in recent sales. Expected top achievers will include two lots of three bottles each of Chateau Lafite Rothschild (French, 2000) and two case lots of 12 bottles of Chateau Haut-Brion (French, 1982).

Then, on Saturday morning, Dec. 4, close to 580 lots will come under the gavel. Period American furniture will feature a Federal mahogany drop-leaf library table from the shop of Duncan Phyfe (circa 1810-1830), a late 18th-century Chippendale mahogany kneehole desk made in New York, a walnut Southern cellaret on frame made around 1800 and with a cataloging label from the Museum of Early Southern Decorative Arts,  a North Carolina walnut and pine chest of drawers crafted circa 1820 in Orange County (home of Leland Little Auction & Estate Sales, Ltd.), a late 18th-century walnut with cedar secondary Southern inlaid center table from Eastern North Carolina, and a Southern Hepplewhite cellaret made in Virginia circa 1800.

Continental furniture will be no less impressive. Offerings will include a diminutive inlaid marble-top French abattant made from mahogany and other light and dark woods in the early 19th century, a Louis XV-style bureau plat with a tooled black leather top over a concave skirt with three side-by-side drawers, a pair of Louis XVI-style screens with Fortuny cotton fabric in a printed yellow damask design, an important English Sheraton satinwood veneer Pembroke table from the 18th century accented with rosewood and oak, and a Continental carved gilt wood large wall panel in the Rococo form, 18th century or earlier, large at 9 feet 6 inches by 5 feet 3 inches.

Asian objects will be served up in abundance. Sample lots include a Chinese Export orange Fitzhugh pattern platter made for the American market with an eagle and streamer depiction, a monumental 36-inch tall Imari covered temple jar from the Meiji period with ovoid tapered form, a Satsuma Thousand Face covered urn in hexagonal form and supported by three shaped feet, an amazing antique Chinese tester bed made in the late 19th century of mahogany with bone and lighter wood inlays, a bronze and gilt bronze Southeast Asian standing Buddha likely made in the 18th century, and a late 19th-century Burmese gilt lacquered Buddha from the Sakyamuni Mandalay period.

Continental works of fine art are certain to get paddles wagging. These include an oil on canvas by Albert Dawant (French, 1852-1923), signed lower right and depicting a stoic Napoleon addressing his troops before battle (and housed in a period frame of excellent quality), a shipwreck oil on canvas in the style of Joseph Vernet (French, 1714-1789), a signed and dated oil on canvas of birds in a landscape by Abraham Bisschop (1660-1731), and a pair of pictures by Abraham Hulk I (British, 1813-1897), signed lower left and housed in fine period gilt wood frames.

Works by American artists will also be much in evidence. Offerings include an oil on board lake scene by John Ross Key (Maryland/D.C., 1837-1920, grandson of Francis Scott Key, who wrote The Star Spangled Banner), two lots comprising five North Carolina-themed etchings on wove paper by Louis Orr (Connecticut/French, 1879-1961), a pencil-signed Jugtown etching by Antoinette Rhett (South Carolina, 1884-1964), a numbered, titled and signed woodcut by Anna Heyward Taylor (South Carolina, 1879-1956), a Raritan sketchbook filled with 48 mostly pencil and ink sketches by Francis Speight (North Carolina, 1896-1989), a signed oil on board rendering of a meandering stream by Robert E. Owen (New York, 1878-1957), and works of note by David B. Walkley (Ohio/Connecticut, 1849-1934), William Lester Stevens (Massachusetts, 1888-1969) and Samuel Dyke (Pennsylvania, 1834-1870), who will have two paintings in the auction.

Fine estate jewelry is always a crowd-pleaser, and this sale has a lot of it. Examples include a Victorian diamond and pearl portrait bangle bracelet with a wide-hinge oval shape showing two detailed painted female portraits on ivory under a clear glass frame, a custom-made diamond bypass solitaire ring signed by Thibodeau and centering on a round brilliant partial bezel set in the center, an 18K gold man’s Rolex perpetual date watch with 54 round and baguette diamonds, a rare (only 100 made) Breitling SuperOcean Heritages chronograph watch (numbered 95/100), and a fine diamond ring set with a gorgeous emerald cut diamond weighing about 1.68 carats.

From the china and porcelains group, two pieces stand out. One is a Meissen porcelain figural group with a large pagoda figure shown seated on a floral strewn base, with a parrot perched on a stump by his knee. It’s unusual because it combines Meissen with Asian, two elements desired by collectors. The other piece is a 20th-century porcelain Amphora bust of a lady. The Teplitz Austrian Art Nouveau bust, in overall remarkable condition, is marked “Rstk Riessner, Stellmacher & Kessel.”

Historical items will feature a signed photograph of Grover Cleveland, 22nd president of the United States (1885-89) in overall very good condition, a one-page document signed by John Hay, the Secretary of State, dated Jan. 5, 1905, a Republican Party campaign circular for Ulysses S. Grant titled The Party of Freedom and Its Candidates – The Duty of the Colored Voter, and a rare set of North Carolina election tickets for 1868, providing Republican and Democratic Party listings of all state and local candidates for the time.

Fans of Southern pottery will not be disappointed, beginning with the monumental Dave the Slave 8-gallon jar (Edgefield, S.C., 1857), ovoid form with applied wide ear handles and with a direct line of descent to the original owner. Other pottery pieces of note will include a salt-glazed stoneware storage jar by Nicholas Fox (Chatham County, N.C., 1797-1858), and a Chinese blue Han earthenware vase crafted by Ben Owen, master potter, circa 1960. Also offered will be glazed Auman Pottery bowls and vases by C.B. Masten (North Carolina, circa 1928-1930).

Vintage lighting will illuminate the crowd, as well as the room. The brightest star in the constellation promises to be a fine Continental Georgian-style crystal chandelier from the 19th century with 10 lights draped with cut crystal swags and five upper bell form cut crystal arms with ornate prism mounts. Other lots will feature a 19th-century bell form Empire-style crystal chandelier with multiple strands of crystals and 12 scrolled candle arms, and a pair of late 19th-century blown glass English three-light glass candelabra.

Fans of vintage toys and mechanical banks will be excited to see pieces by J. & E. Stevens, Kenton, Henry Chart and others.

Rounding out the day’s list of expected top lots is a 1929-30 Notre Dame champions rectangular pennant made of felt, a Mariano Fortuny (Italian) pleated silk Delphos tea gown made in the 1920s, weighted and edged with white Murano glass beads over a tunic forming points at the sided and center, and a small rectangular form North Carolina leather key basket with provenance and of tooled line decoration and rolled handle with decorative metal fixtures at the base.

For details call Leland Little Auction & Estate Sales Ltd. at 919-644-1243, e-mail them at info@LLAuctions.com or log on to www.LLAuctions.com. 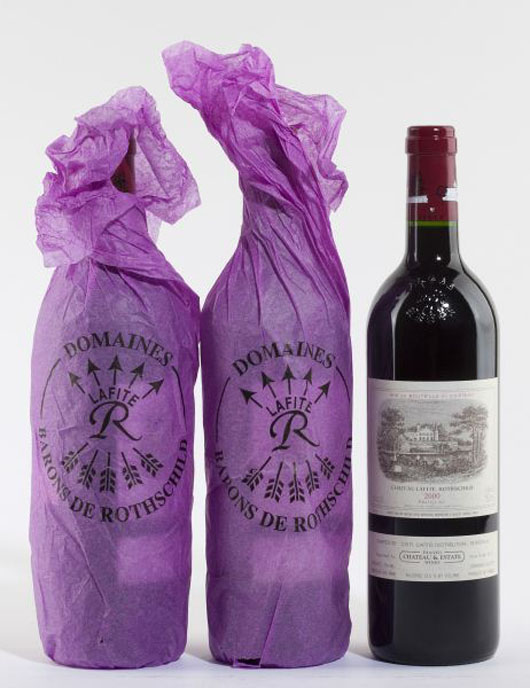 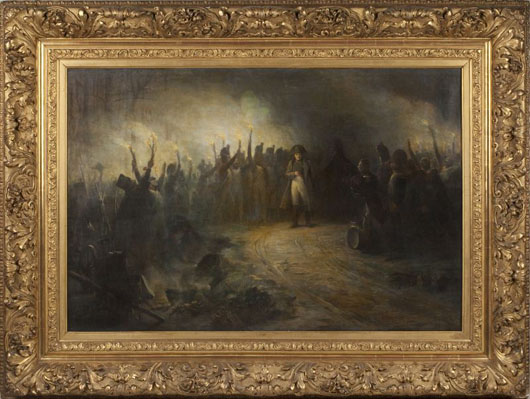 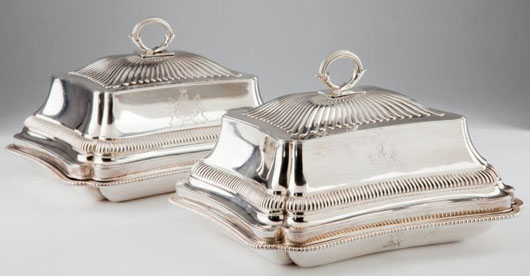 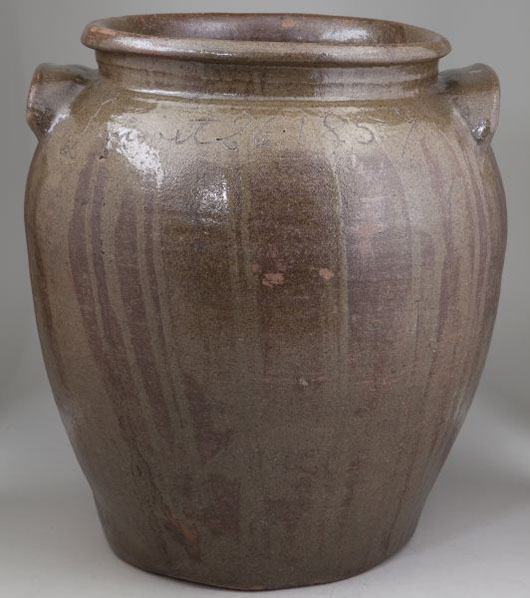 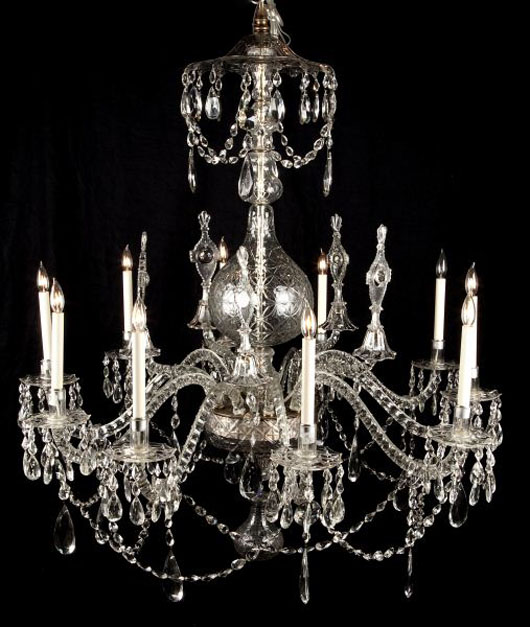