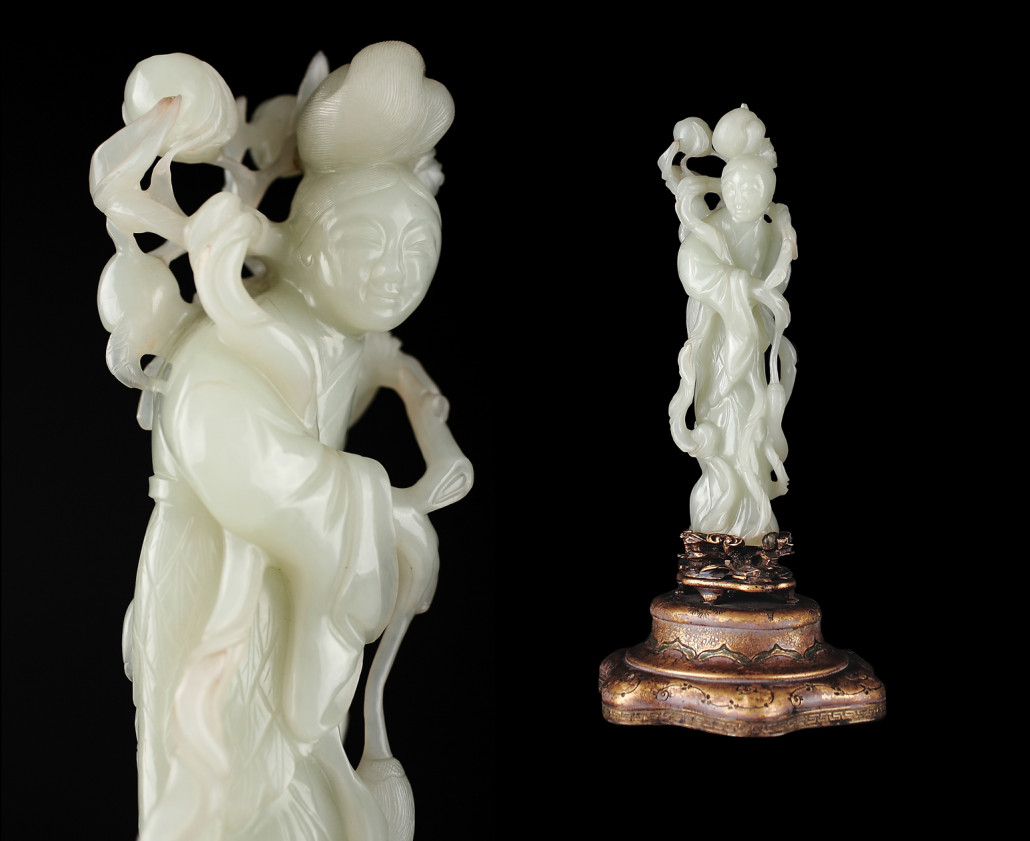 FOREST HILLS, N.Y. – Kyo Wu, the trusted art historian who founded Lester Ramsey Auctions in 2010, said his team left no stone unturned in preparing for the company’s Dec. 6 Fine Chinese Works of Art Auction. “We went off the beaten path to track down exciting discoveries that would be fresh to the marketplace,” Wu said.

The top-tier 260-lot selection prepared for the Dec. 6 sale is the tangible reflection of Wu’s perseverance. “More than half of the goods came directly from American collections with noteworthy provenance,” Wu said.

Wu said he has opted to keep the estimates “humble,” promising consignors he would promote their pieces vigorously. “If you offer quality Chinese art to bidders, it will find its correct price through auction competition.”

Important jades include examples from the Yuan Dynasty (1160-1368) all the way through to the end of the Qing Dynasty (1644-1911). “Using large, beautifully carved Chinese jades as lamp bases was a practice made popular by Bensebott’s in Chicago as well as Yamanaka and Edward I. Farmer (1872-1942) of New York City. These lamps were popular among America’s elite industrialist families from around 1900 through the Art Deco period,” Wu noted.

Lot 75 (shown at top) is just such a piece and can be traced to the estate of Senator William Andrews Clark (1839-1925) of the immensely wealthy Clark family, which earned its fortune from mining and banking and was on par with the Vanderbilts and Morgans. The white jade carving turned lamp base depicts an immortal carrying a branch of peaches, a flywhisk and a gourd. It stands an impressive 11½ inches tall and is attributed to the Qianlong period (1735-1796).

“We’ve seen interior pictures of Senator Clark’s 100-room Fifth Avenue mansion. It was filled with extraordinary Chinese and European art. This jade came from the senator’s collection, which passed by descent through the Clark family and previously was auctioned at Christie’s in a sale titled ‘The Clark Family, An American Dynasty,’” Wu said. The venerable jade is estimated at $25,000-$35,000.

Like the Clark family jade, Lot 57 (shown below), an intricately carved soapstone tableau depicting eight Chinese immortals, was mounted to a lamp base attributed to eminent Chinese art collector and silversmith Edward I. Farmer. The 14-inch landscape carving comes with provenance from an important Cape Cod collection and is modestly estimated at $2,000-$3,000. “Lamps with bases quite similar to this one have sold very well in the past, so we are pleased to offer this piece for such an attractive estimate,” Wu said. 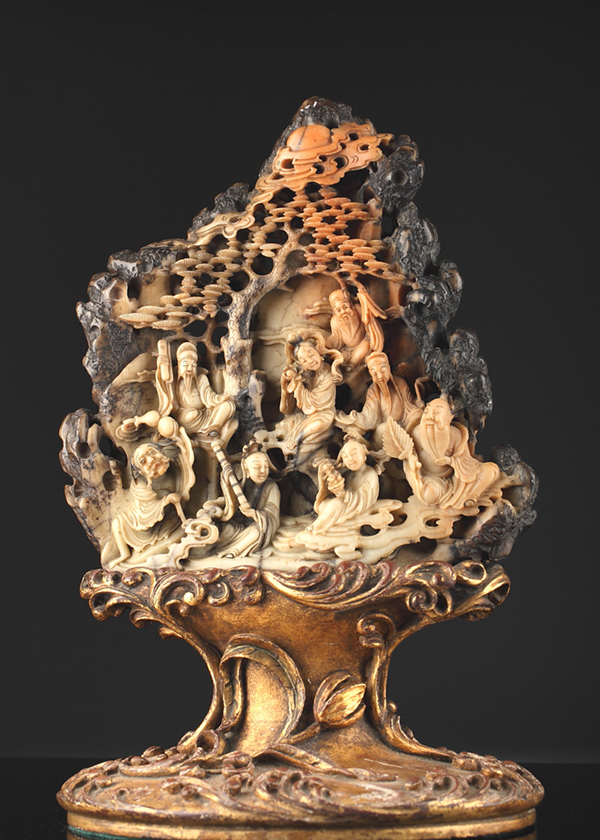 This close-up view below shows how remarkable the carving is on the soapstone carving. 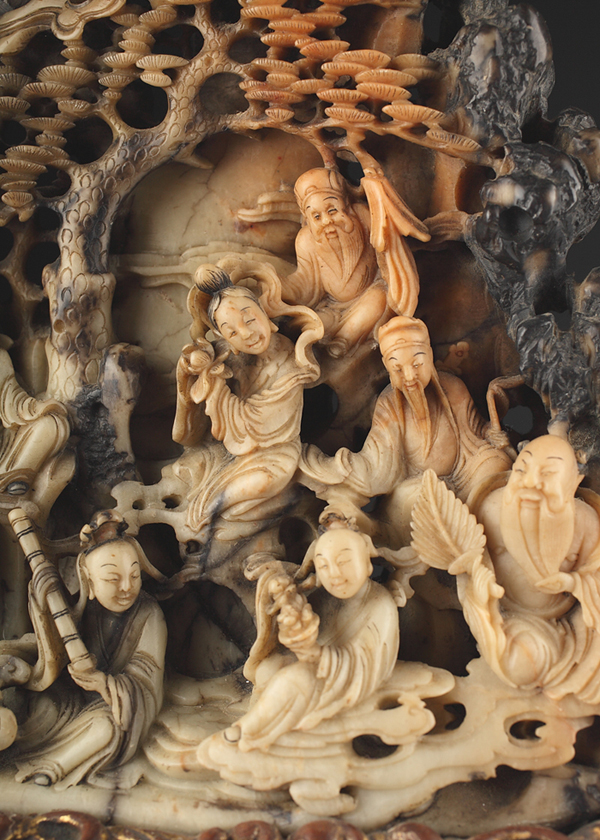 Lot 69 (shown below) meets all the criteria for a genuine Chinese jade from the Yuan Dynasty (1160-1368). The celadon jade carving, which comes from a Texas private collection, depicts the mythological winged beast “Chimera” and exhibits distinctive Yuan characteristics. “The style of ears, the upward-turning nose, and the subject matter itself are all evocative of carvings from the very desirable Yuan period,” Wu said. Estimate: $7,000-$9,000. 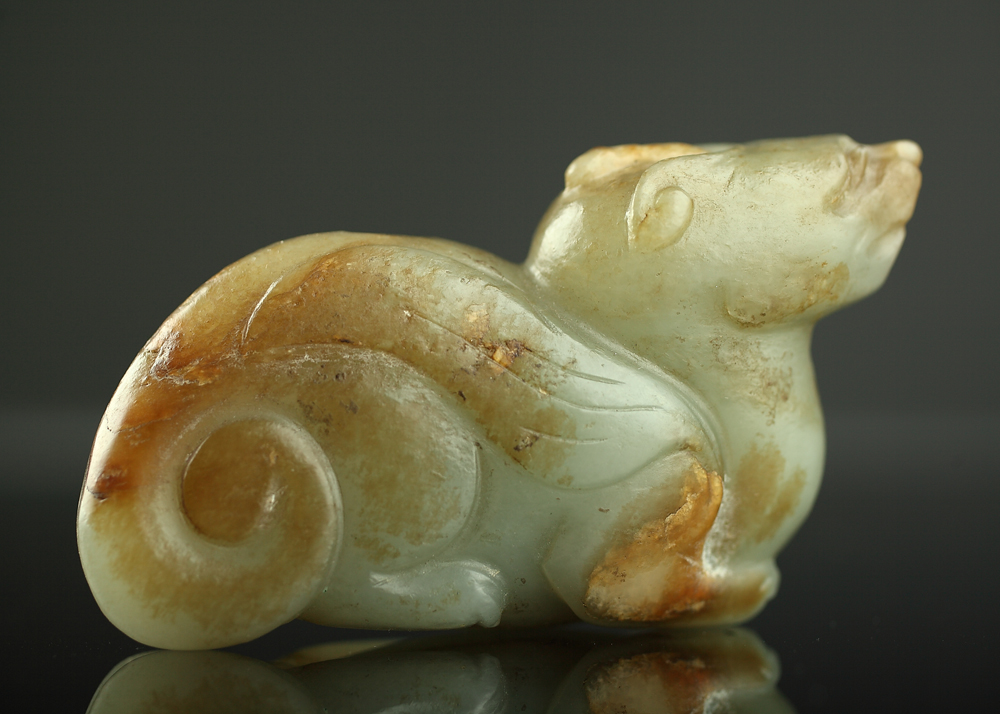 Several particularly fine gilt-bronze Ming Dynasty Buddhas will take the auction spotlight. Three of the finest will be offered with conservative individual pre-sale estimates of $1,200-$1,800. Lot 17B, a 17-inch-tall bronze of a robed figure holding a lotus stem and cup, has an incised three-character mark to the back and comes from the Estate of Irene A. Farber, Los Angeles.

Lot 18 (shown below) is a 12-inch-tall depiction of the 10th-century Zen monk Budai, or “the Laughing Buddha.” Only two or three examples of a gilt-bronze Budai of this type have ever appeared at auction. Lester Ramsey’s example is fresh from the collection of J.S. Rogers of Landover, Maryland. Previously, the piece belonged to Rogers’ mother, who started collecting in the early 1900s. The distinguished trio of deities is completed with Lot 20, a Buddha that embodies elegance and purity of form. The hefty bronze from a Long Island collection measures 8¼ inches high. 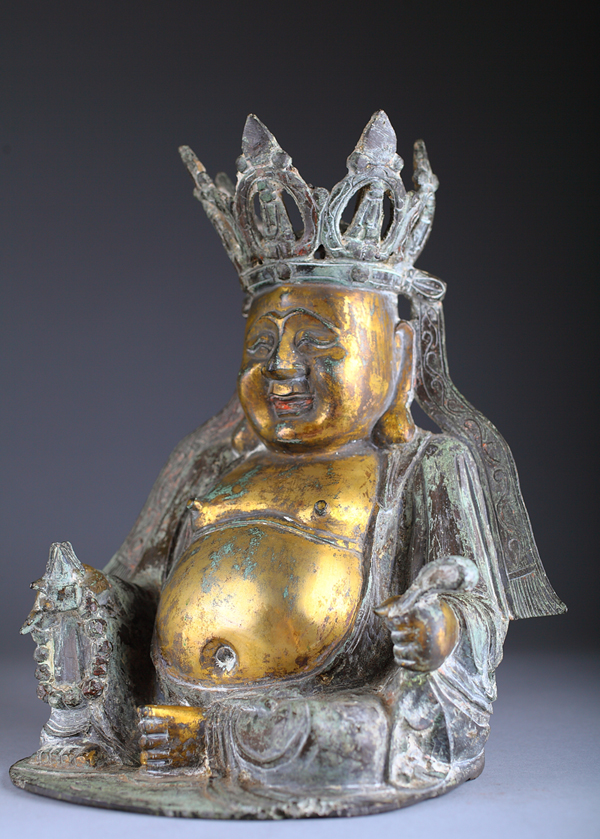 Could Lot 19 (shown below) possibly be concealing a gift with purchase? An X-ray might reveal the answer, said Wu, describing the antique Chinese bronze Buddha that has attracted multiple queries regarding its sealed base. “For its size, this is a very heavy Buddha. It’s of the type that would be sealed with precious items inside – sometimes things made of solid gold.” Fresh from a California private collection, the Buddha is entered in the sale with a $1,200-$1,800 estimate. 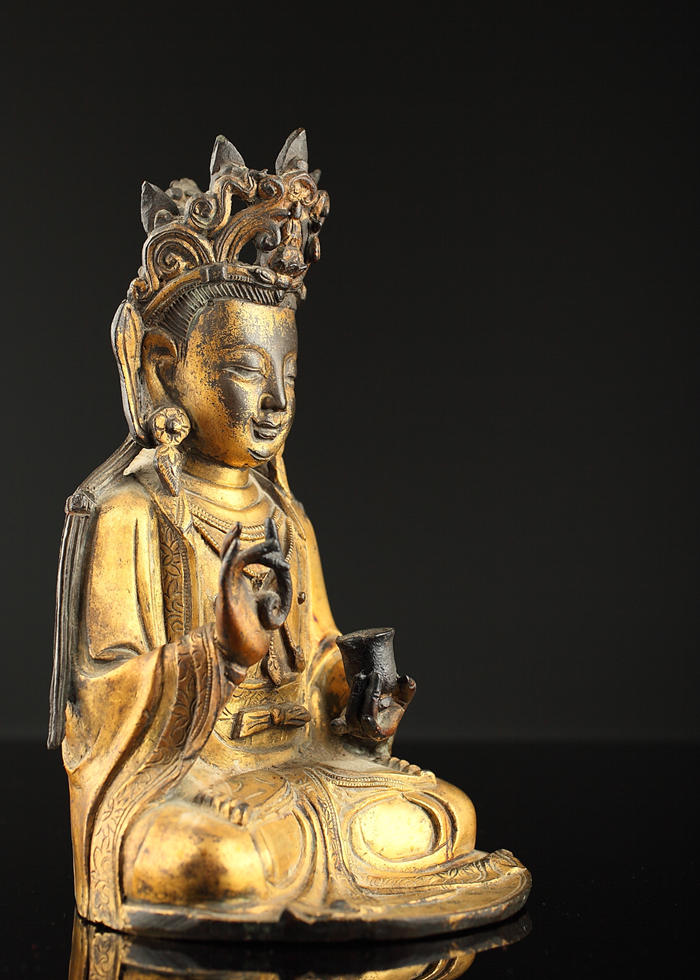 Connoisseurs appreciate the simplicity and symbolism of Chinese bronze censers, said Wu. “They were meant for use on an altar to play a specific role in religious rituals. They help to create a serene and reverent environment for prayer and meditation, so their beauty is not expressed by embellishment, but rather by their fine patina and quality casting.” Of those offered in the Dec. 9 sale, Lot 14B (shown below) is a standout. The double-handled antique bronze censer is signed and comes with provenance from a Boston estate. Estimate: $1,200-$1,800. 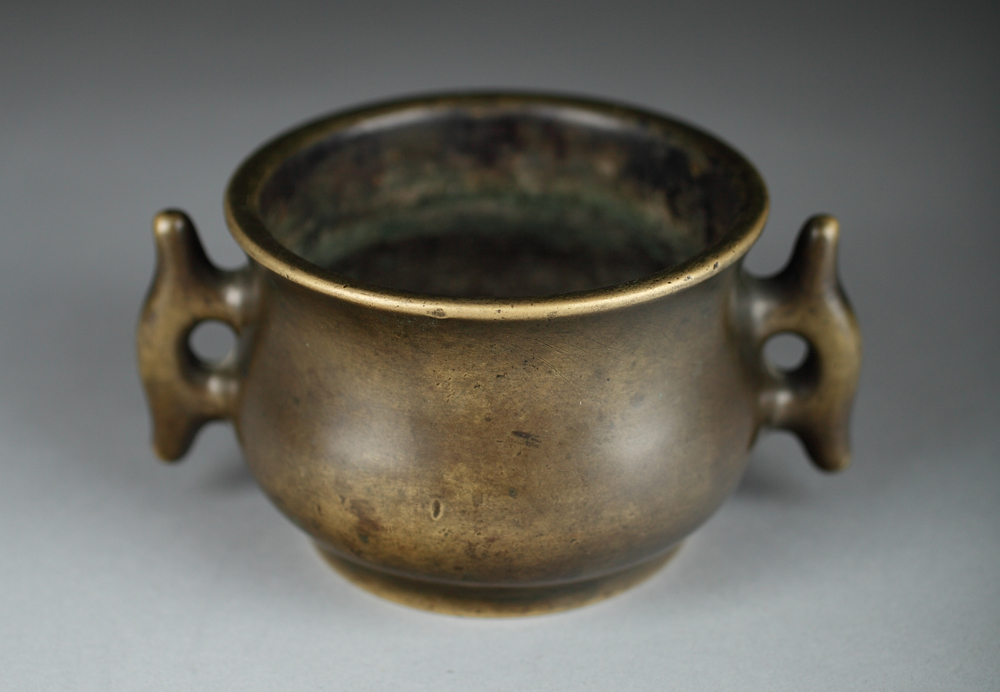 Lot 9 (shown below), an older Chinese blanc de chine robed figure, 8½ inches tall, exhibits a standard of work that captures human expression very realistically. It retains a Christie’s label from a prior sale and is estimated at $800-$1,200. Lot 17 is one of many large, beautifully glazed and signed porcelain laughing Buddhas to be auctioned. Its style is pure Chinese as opposed to Tibetan, and the signature suggests it is that of a famous Qing Dynasty-period workshop. 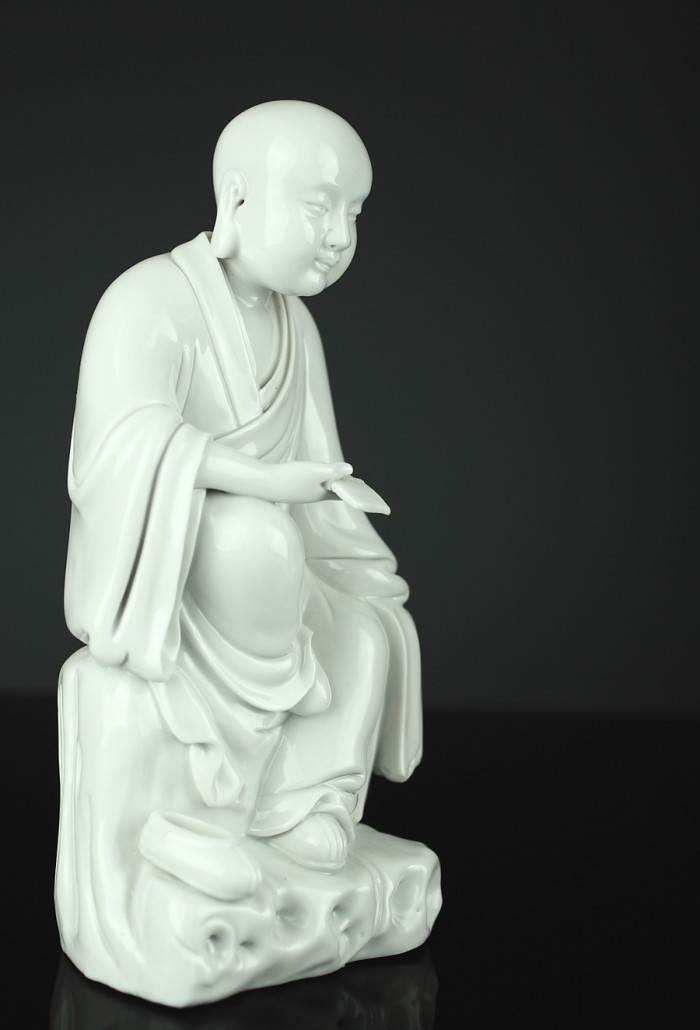 An intriguing mystery, Lot 124 is an antique Chinese silver pocket watch that Wu described as “an unfinished story that’s still being researched.” Wu explained that the Chinese have had a fascination for clockwork mechanisms that goes back to the 18th century. “The little moving gears, the ability to track the movements of the sun – to the Far East at that time, it was like magic.” Wu believes the pocket watch in his sale, which has elaborate Chinese hallmarks and writing both inside its case and on its face, was made in China for the Chinese market, but that its clockwork movement is likely European. “It’s an early watch, and there’s a lot of quality evident in the way it was made. Hopefully it will appeal both to scholars and collectors of antique timepieces.” Estimate: $600-$800. 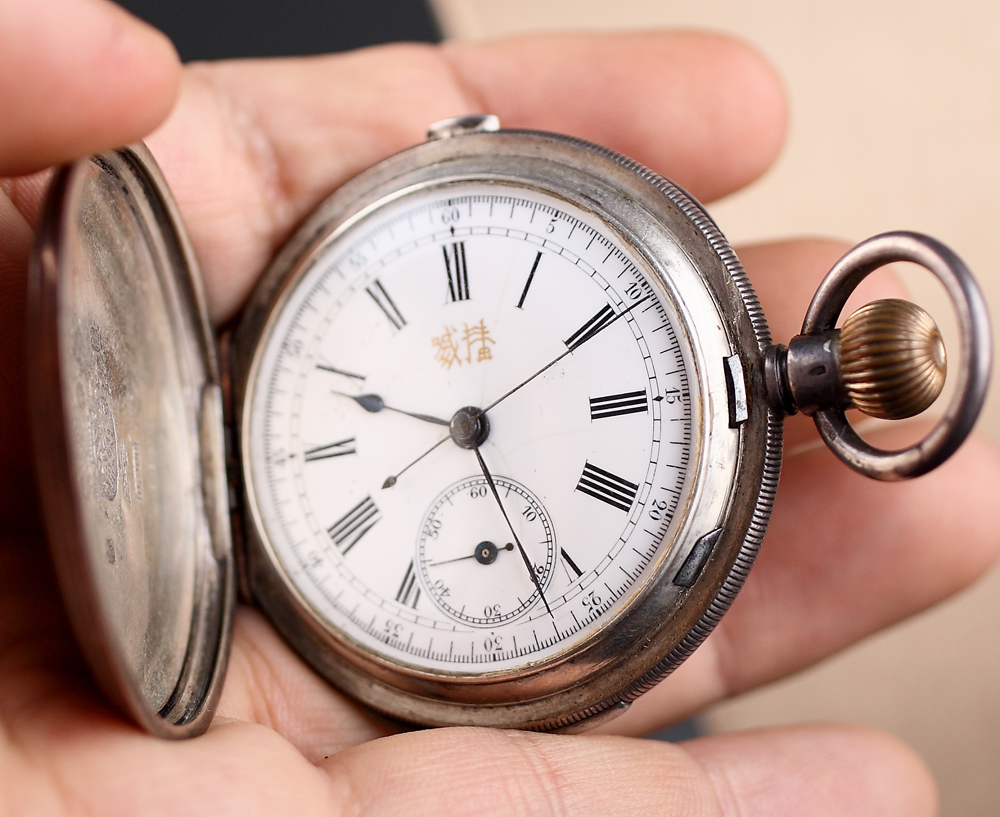 For additional information on any item in the auction, call Lester Ramsey Auctions at 347-436-8383, ext. 1 or 2; or email info@lesterramsey.com.

Gigantic Jamali painting to be featured at Associate Auctions Nov. 20