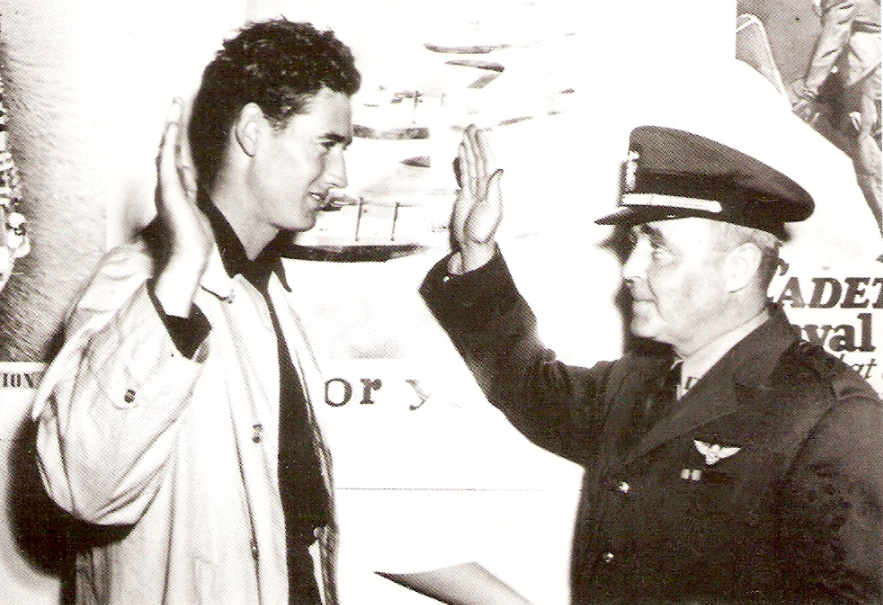 In this photo attributed to the United States Marine Corps, Ted Williams is sworn into military service on May 22, 1942.

BIDDEFORD, Maine (AP) – Most folks know Ted Williams as the Red Sox slugger and Hall of Famer. But letters going up for auction describe his hiatus from baseball to serve in the Korean War.

The 38 letters written to a mistress from 1952 to 1954 include one in which he describes crash-landing a fighter jet with “holes all over the plane.”

Another letter written after his father’s death described Williams’ anguish and regret over having not spent more time with him.

Yet another alluded to a military radioman sabotaging his plane to keep it grounded for repairs so he could spend extra time with his girlfriend.

The letters and other items from Evelyn Turner’s estate will be auctioned along with other baseball and celebrity memorabilia Jan. 3 in Biddeford, Maine. Bid absentee or online through LiveAuctioneers.

Ted Williams left an immense legacy to baseball. At the time of his retirement, Williams ranked third all-time in home runs (behind Babe Ruth and Jimmie Foxx), seventh in RBIs (after Ruth, Cap Anson, Lou Gehrig, Ty Cobb, Foxx, and Mel Ott; Stan Musial passed Williams in 1962), and seventh in batting average (behind Cobb, Rogers Hornsby, Shoeless Joe Jackson, Lefty O’Doul, Ed Delahanty and Tris Speaker). His career batting average is the highest of any player who played his entire career in the live-ball era following 1920.

Most modern statistical analyses place Williams, along with Ruth and Bonds, among the three most potent hitters to have played the game. Williams’ baseball season of 1941 is often considered favorably with the greatest seasons of Ruth and Bonds in terms of various offensive statistical measures such as slugging, on-base and “offensive winning percentage.” As a further indication, of the ten best seasons for OPS, short for On-Base Plus Slugging Percentage, a popular modern measure of offensive productivity, four each were achieved by Ruth and Bonds, and two by Williams.

Although Williams’ career did not overlap with that of Ruth or Bonds, a direct comparison with another great hitter, Hank Aaron, is possible. From 1955 to 1960, Williams maintained an average OPS of 1.092, as compared with .950 for Aaron. Williams’ age (37-42) was well past the prime of most hitters, but he still managed to hit .388 at the age of 39. Although Aaron (age 21-26) recorded only one of his five best seasons, their averages are not too far from the career averages of the two baseball players.

In 1999, Williams was ranked as number eight on The Sporting News‘ list of the 100 Greatest Baseball Players, where he was the highest-ranking left fielder.