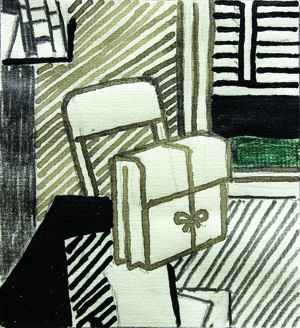 OAKLAND, Calif. – On September 13, 14, and 15, 2014, Clars Auction Gallery will host what is anticipated to be the largest sale in the firm’s history. In a year where each monthly sale surpassed all previous records for that month, their September event will be an exciting world-class experience for buyers and collectors around the globe. Internet live bidding will be available through LiveAuctioneers.


Roy Lichtenstein’s (American, 1993–1997) Study for Still Life with Dossier leads the fine-art offerings. This drawing—the only known study for the 1976 Still Life with Dossier painting currently in the important post-war collection of Dr. Giuliano Gori—has always been held privately. Artistically a strong example of the artist’s work, the drawing engages a significant shift stylistically in Lichtenstein’s practice. In the study, we see the artist’s early use of straight lines, rather than his iconic Ben-Day dots. By 1983 his signature dots had yielded almost entirely to stripes. The fact that the artist created very few drawings and that this work is fresh to the market will make this 11 13/16 x 8 15/16 inch drawing the leading lot in the Fine Art Offering.

“The story of how this work was consigned at Clars is one of scholarship and, as far as provenance is concerned, it could not be better,” said Rick Unruh, Vice President and Director of Fine Art. This work will be offered for $80,000 to $120,000.

The second premier offering will be a work by Leonor Fini (French, 1908-1996). Fini was an artist living in Paris for the majority of her career who counted Pablo Picasso, Rene Magritte, Max Ernst, Jean Cocteau, and Salvador Dali amongst her many friends and peers in the art world. Dialogue Impossible (1994) depicts a strong woman clad in a long flowing crimson skirt, looking past the drab man with his eyes closed beneath her. The painting, originally from the Weinstein Gallery of San Francisco, CA (which represents the artist), is expected to achieve its $60,000-$80,000 estimate with ease.

Clars is once again pleased to present a fine sculpture by African American Modernist, Elizabeth Catlett (1915-2012), titled Cabeza de Piedra. This 11-inch cast-stone piece will be offered at $16,000 to $22,000 and depicts the head of a man. It recalls the strength of traditional Aztec and Mayan stone sculpture in Mexican culture, which influenced Catlett significantly. The artist makes a powerful statement with this a unique example. Another important sculpture is a Beaux Arts classic by Louis Ernest Barrias (French, 1841-1905) titled Nature Revealing Herself to Science. Estimate: $20,000 to $30,000.

This summer’s World Cup has come and gone, but the brilliant pop art of Brazilian artist Romero Britto (b. 1963), will be available at this sale. This vibrantly playful, acrylic on canvas titled Brazilia Lady exemplifies the effervescent spirit of this talented South American artist. Estimate: $18,000 to $22,000.

Two American painters whose works exemplify the magnificence of the flowering field landscapes will also be featured on September 14th. One of which is a spectacular oil on board by the Texas artist, Julian Onderdonk (1882-1922), titled Bluebonnets – Early Morning. It is offered for $30,000 to $50,000. Fields of California poppies are the focus of acolorful oil on canvas by John Marshall Gamble (1863 – 1957), titled, Meadow with Poppies and Purple Mountains, which is estimated at $15,000 to $20,000.

Clars is honored to offer the work titled A Walk Into Town, by 19th-century Dutch Master Bernardus Johannes Blommers (1845-1914), one of the most collected artists of The Hague school of painters. This work was originally part of the extraordinary Jacques Goudstikker Gallery Collection, which was seized by the Nazis during their art confiscation program. This work by Blommers was recently a subject in the travelling exhibit “Reclaimed, Paintings from the Collection of Jacques Goudstikker.” The provenance of this work, combined with the balanced composition and timeless Dutch-Master palette, makes the appearance of this work at auction an exciting opportunity for collectors. Estimate: $5,000 to $7,000.

One region of the globe that is experiencing skyrocketing art prices is Russia. Clars is pleased to be offering paintings by some of the finest 19th and 20th century Russian artists on the market. One of these highlights is a dramatic scene by Lev Lagorio (1827-1905) titled Figures Gazing at the Sea, which is conservatively priced to sell at $15,000 to $20,000.

Diego Giocometti (Switzerland, 1902-1985) was one of the premier designers of the 20th century. His works are held in the finest museums, private collections and homes worldwide. On Sunday, September 14th, Clars will offer a console rectangulaire created by this renowned artist. This important work of art in design will be offered for $80,000 to $120,000. Other top furniture designers represented include Frank Lloyd Wright and Silas Seandel.

There will be a large collection of American and European lighting including pieces by Tiffany Studios, Pairpoint, Handel, and others. A Tiffany Studios Venetian desk lamp is estimated at $50,000-$70,000.

Another highlight will be a group of turned wood bowls, consisting of an 18th century Koa wood example having indigenous repairs, valued at $3,000 to $5,000; a large Koertge example, as well as a Moulthrop vessel.

The Continental highlights include a pair of monumental French marble and ormolu mounted urnsattributed to Henry Dasson (1825-1896), $30,000 to $50,000. This offering will be complemented by both monumental Royal Vienna and Sevres urns. An impressive selection of clocks includes a mother of pearl marquetry decorated eight-ball, double fuse bracket clock with automaton, having an estimate of $5,000-$7,000.

Also to be offered are sterling siver, fine jewelry, an extensive selection of important Asian art. 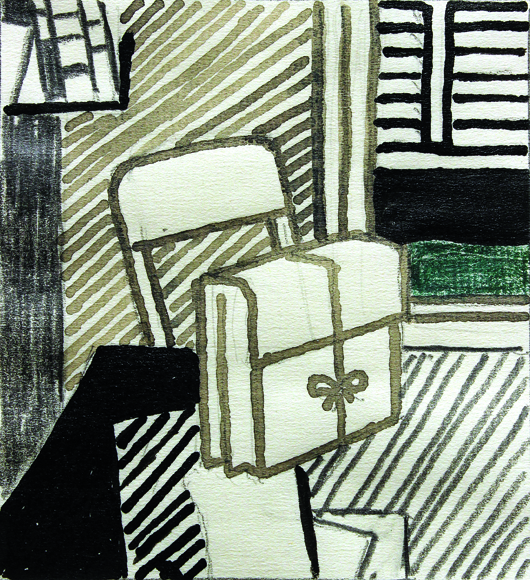 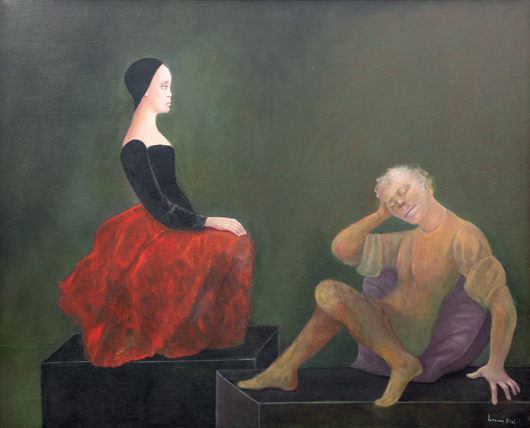 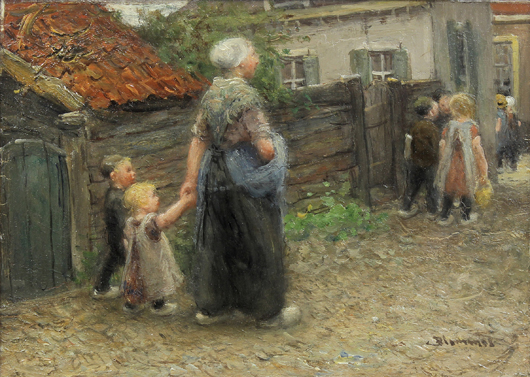 This work titled, A Walk Into Town, by Dutch Master Bernardus Johannes Blommers (1845-1914) from the storied Jacques Goudstikker collection, will be offered for $5,000 to $7,000. Clars image 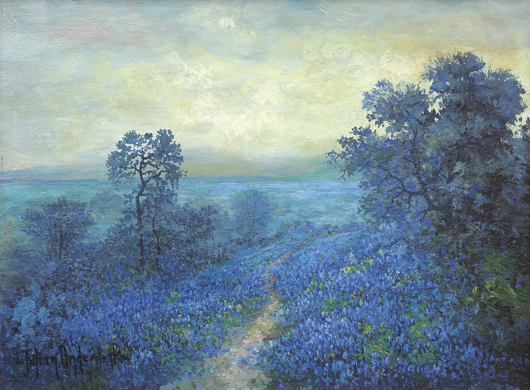 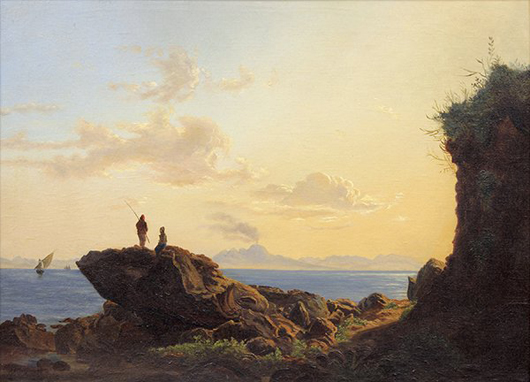 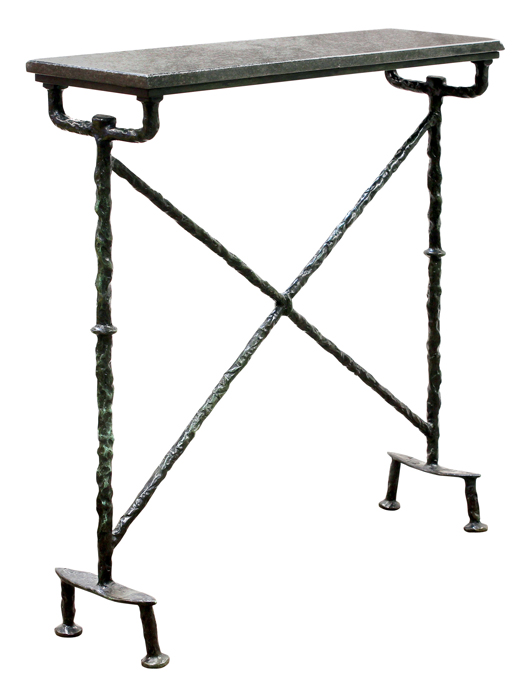 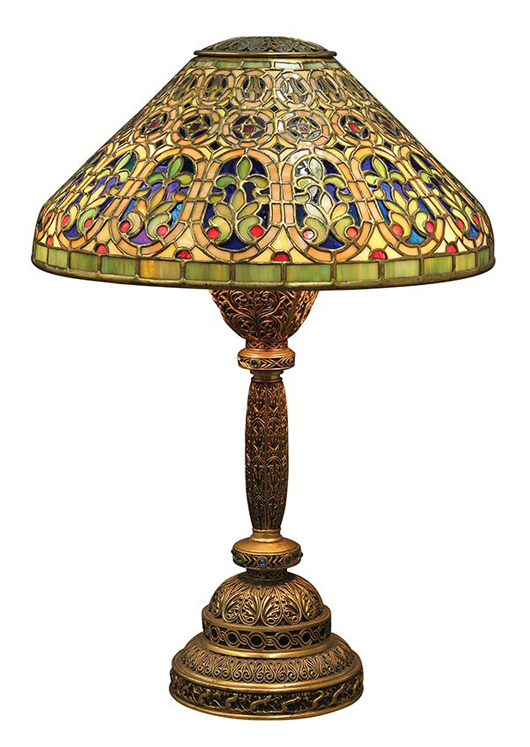 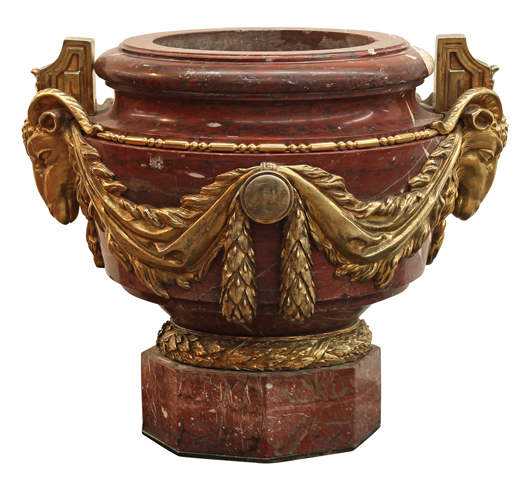 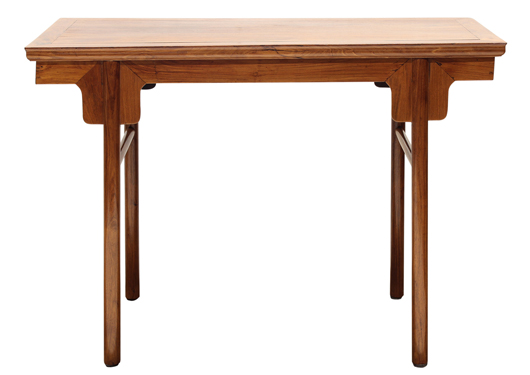 A highlight of the Asian offerings is this Chinese huanghuali table composed of two floating top panels and conservatively estimated at $20,000 to $40,000. Clars image 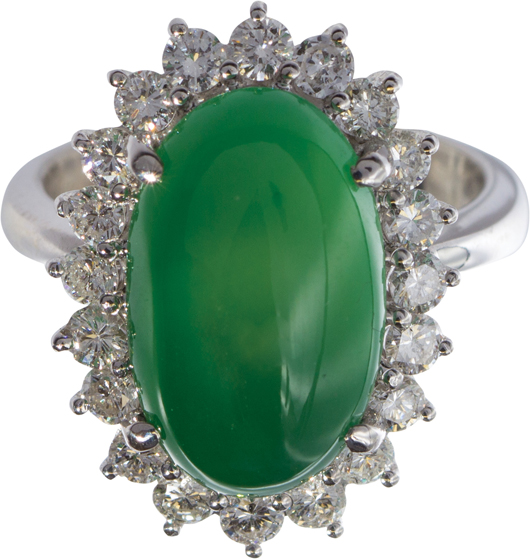