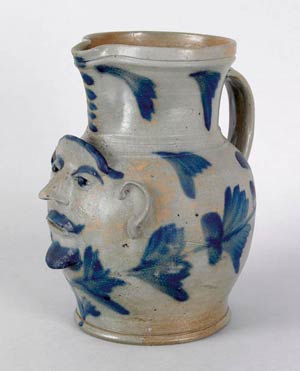 Among the 816 lots are many local carvings primarily from the 19th and 20th centuries. Many of these carvings were pictured in Just for Nice, Carving and Whittling Magic of Southeastern Pennsylvania, written by the Machmers in 1991. One of the favorite carvers, John Reber, is well represented in the auction. Reber, born in 1857 in Lehigh County, Pa., is known for his realistic work and attention to detail. Reber highlights include: a “Dan Patch” figure of a horse with sulky and driver (Est. $25,000-$35,000), a stallion (Est. $12,000-$18,000), a 17″ long pheasant, a guinea hen and several roosters.

The work of carver “Schtockschnitzler” Simmons of Berks County, Pa. can be found in several museums, including Winterthur, Henry Ford, Berks County Historical Society and others. Three polychrome-decorated bird trees by Simmons will be offered. The first tree includes nine birds in vivid shades of red, blue, yellow, brown and white, and stands 19¼-inches high (Est. $30,000-$50,000). A bold multicolored Simmons figure of a parrot is sure to interest collectors. The bird stands 7¾-inches high and carries an estimate of $8,000-12,000. Simmons was also known for his canes. Five are available in the sale, including one with the grip in the form of a hand supporting a bright red bird on a basket.

Cumberland County, Pa., whittler Wilhelm Schimmel, famous for his eagles and eaglets, is perhaps one of the best-known Pennsylvania carvers. A work of Schimmel’s, an unusual carved and polychrome-decorated dog with a basket in its mouth, will attract bidders. Illustrated in Just for Nice (figure 61, and lot 223 in the sale) is a fine, carved angel with an ivory surface by the Ephrata-Schoeneck carver (Est. $10,000-$15,000). Asa Carpenter’s great carving of a sow and her offspring, inscribed “Jacknife Carving by Asa Carpenter” is also included in the sale. Other well-known carvers represented include the Virginville carver, Nathan Ruppert, Lewis DeTurk, Stephen Polaha, Noah Weiss and others.

A favorite category of Dick Machmer’s was the art of the Jail Carvers. These men, working from 1900-1945, were originally taught in the larger prisons of the Philadelphia area. They were subsequently transferred to local county prisons, including Berks County Prison, where one of the purported carvers, Alvin Sweitzer, was incarcerated. The Jail Carvers primarily whittled hobo figures, but are also known for their Amish family groups. A recognizable example of their work is lot 113 which depicts a policeman arresting three vagrants under a lamppost. Another favorite carver of the Machmer’s was George Wolfskill, born in Lancaster County in 1872. An elaborate fox hunt scene of his, 24-inches long, illustrates three hunters and 11 dogs chasing two foxes.

Of the approximately 33 canes offered, a patriotic example stands out as one of the best. This polychrome-decorated piece has a foliate-decorated handle above two American flags flanking inset figures of two soldiers above 22 carved relief heads of U.S. Presidents, from Washington to Cleveland (Est. $15,000-$25,000). Another important cane, signed “J.P. Zweizig Reading, PA” has a bird grip and a shaft decorated with Masonic emblems, trolley car, Native Americans and a flag. Additional canes have a myriad of varying relief figures, including elephants, dogs, alligators, hearts, birds, deer, human figures, floral and geometric patterns.

Several of Pennsylvania’s itinerant painters were known for their representations of various almshouses. Both John Rasmussen and Charles Hofmann took refuge at the Berks County Almshouse and painted intricate colorful views of that institution. While most of Rasmussen’s works were painted on tin, an excellent piece of his in the Machmer collection is oil on canvas. One of the artist’s finest works, the central bird’s-eye view depicts the almshouse with figures engaged in various activities, and is surrounded by five smaller vignettes.

A Pennsylvania scene of the Old Snyder Farm, by Franklin Eshelman, will be offered. The painting was exhibited at the Reading Public Museum in 1982, and an example by the same artist of the same farm was sold in the collection of Julie and Sandy Paley at Sotheby’s in January 2002. Three works by Augustus Kollner will also be sold, including a very fine bird’s-eye view titled Pottsville Penna from the Northeast (Est. $5,000-$8,000). Two fine oil-on-canvas paintings of chicks by Ben Austrian will be included as well. Other represented artists include Ferdinand Brader, Edward Howell, Mary Leisz, Timothy Barr, Christopher Shearer, John Berninger, and Samuel Moon. Five examples by Pennsylvania artist Hattie Klapp Brunner, including two snow scenes, two vibrant farms scenes and an auction scene are highlighted together with 19 pieces by Pennsylvania artist David Y. Ellinger. Ellinger, long known for his oil-on-velvet works, will attract interest with a large farm scene (Est. $8,000-$12,000) and a theorem of a basket of fruit (Est. $5,000-$8,000).

Due to its genealogical and historic nature, fraktur was of great interest to Richard and Rosemarie Machmer. They amassed a large collection with many well-known artists represented. These colorful illuminated manuscripts have yielded a tremendous amount of family information that is recorded in various educational institutions. A rare example by the I.T.W. Artist of Berks County, with its red, green and yellow mermaids, parrots and tulips was made for Jacob Adams and is dated 1805. Another dramatic birth certificate by Christian Mertel for Henrich Gehug depicts bold castles and recumbent lions with human faces. Other fraktur artists include Martin Brechall, Henrich Dulheuer, Ehre Vater, Wilhelmus Faber, Abraham Huth, Frederich Krebs, David Kulp, Friederich Kuster, Heinrich Otto and John VanMinian.

In addition to Just for Nice, Richard Machmer also wrote another antique reference book titled Berks County Tall Case Clocks 1750-1850. Three outstanding clocks featured in the book, including a figured cherry example by Peter Gifft of Kutztown, will be sold. The most important is a Montgomery County, Pa., Chippendale walnut tall case clock by Adam Brant. This clock is in remarkable condition with original carved finials and rosettes, and a virtually untouched “in the black” surface (Est. $60,000-$90,000).

Painted furniture will be offered on both days of the auction. A Berks County two-part Dutch cupboard included in the sale retains its original pure brilliant orange and salmon swirl decoration and red moldings. A nearly identical example is on display at the Landis Valley Museum and has the signature of Benj. Blatt. Both pieces are likely from the same shop and probably the same hand. A Montgomery County corner cupboard, lot 568, has similar vibrant red and yellow swirl decorated surface. Purchased at a Schnecksville, Pa., auction 35 years ago for $5,500, cupboard is one of the dower chests in the Machmer collection that is well documented and known. This Pa. chest is decorated with stylized floral trees arising from tulips, birds and four fish, and is illustrated in The Pennsylvania Germans, A Celebration of The Arts, (figure 35) and in Folk Hearts, (figure 71). A Lehigh County, Pa., dower chest dated 1785 is another highlight. Inscribed with the name “Sofia Resinger,” this piece has two green sponge decorated hearts, each with pinwheels and all within an interlacing circle border above two drawers (Est. $50,000-$80,000). A Lancaster County dower chest from the workshop of Johann Flory, and pictured in “The Pennsylvania German Decorated Chest” (figure 135), is decorated with prancing horses, parrots and pinwheels. A Lehigh County miniature painted dower chest with large floral sprays emanating from urns will also be offered on Saturday.

Two East Hempfield Township, Lancaster County schranks, both made for members of the Kauffman family, and featuring sulphur inlaid panels inscribed with initials and dated 1764 and 1768, will be offered in the sale. A very fine Chester County walnut spice box with compass star inlaid door and ball feet will be a featured lot (Est. $50,000-$80,000).  The inlaid furniture category is further enhanced by a walnut blanket chest with inlaid tulips, pinwheel, hearts and six pointed stars.

Textiles were a passion of the Machmer family, who had an eye for bold colors and graphic design elements. There are many examples including a yellow, green and red quilt with four large eagles with shield breasts; a vibrant mariner’s compass quilt, a red and green Amish sawtooth center diamond quilt and a folk art appliqué quilt with four panels, each with an Indian with bow and arrow.  Many crib quilts will enhance the textile category together with Pennsylvania coverlets, pillow shams, needlework purses and pinballs.

A rare Philadelphia stoneware pitcher attributed to Richard Remmey with relief man’s face is a much sought after piece. The face has a cobalt-highlighted goatee, mustache, eyes and eyebrows and stands 10¼” high. (Est. 40,000-60,000). Many other fine pieces of stoneware are interspersed throughout the sale. Redware will also be offered on both days. A Shenandoah Valley whimsy depicting a gentleman seated on a tree stump with a bottle in his hand and a dog at his feet is a rare item. 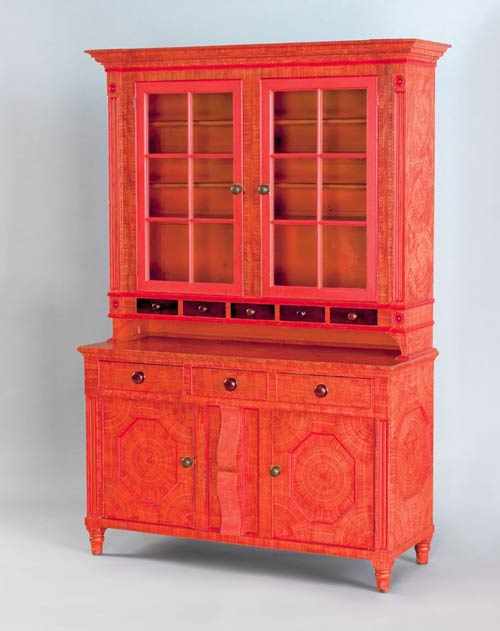 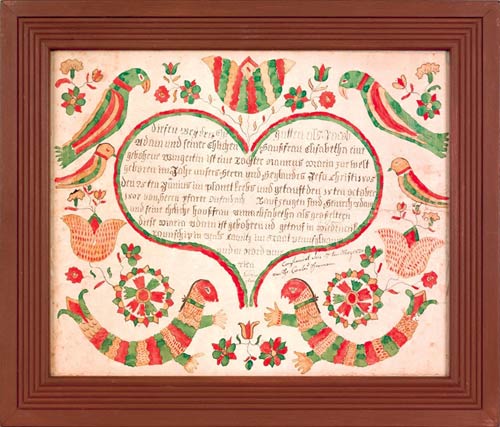 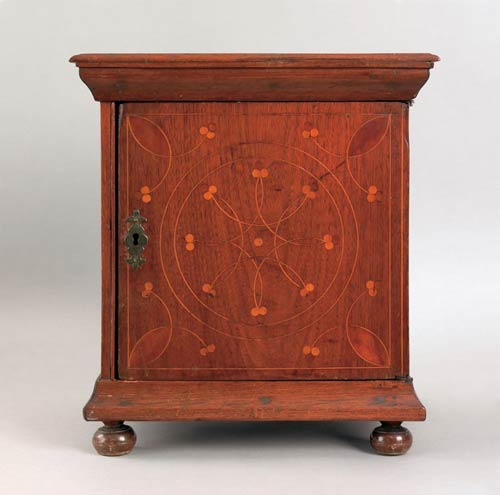 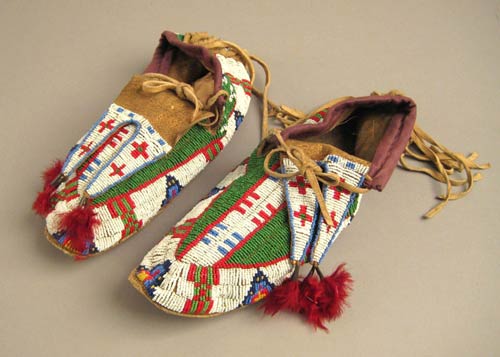 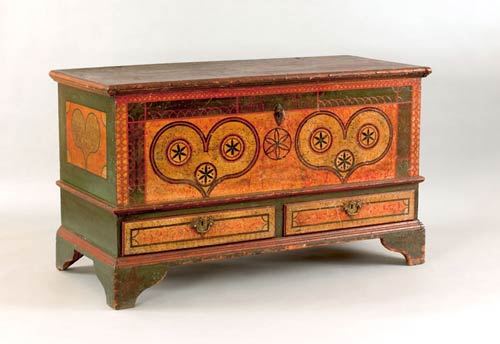 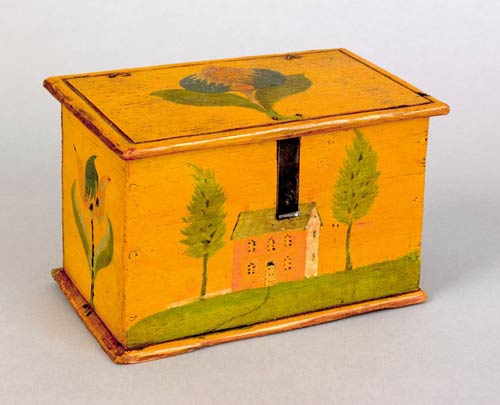