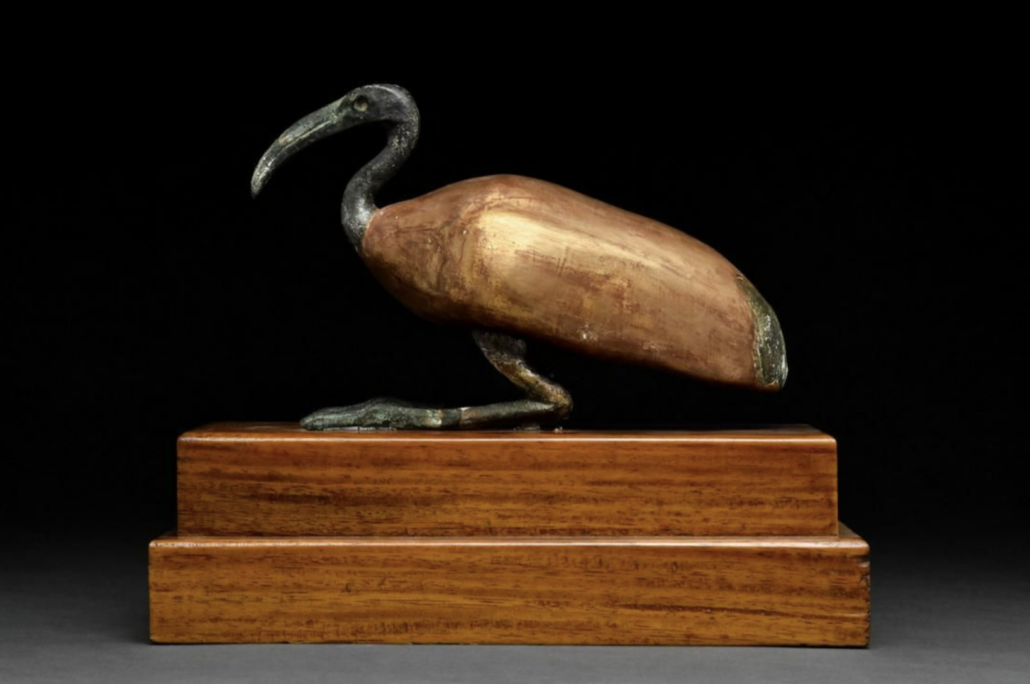 On Sunday, November 21, Apollo Galleries will present a 331-lot Ancient Art & Antiquities Auction, with absentee and Internet live bidding through LiveAuctioneers, that takes collectors on a virtual journey through the most important cultures of the past. The fully curated boutique selection features museum-quality art and relics from the intriguing civilizations of the Indus Valley through the Viking Age and Crusader Era. 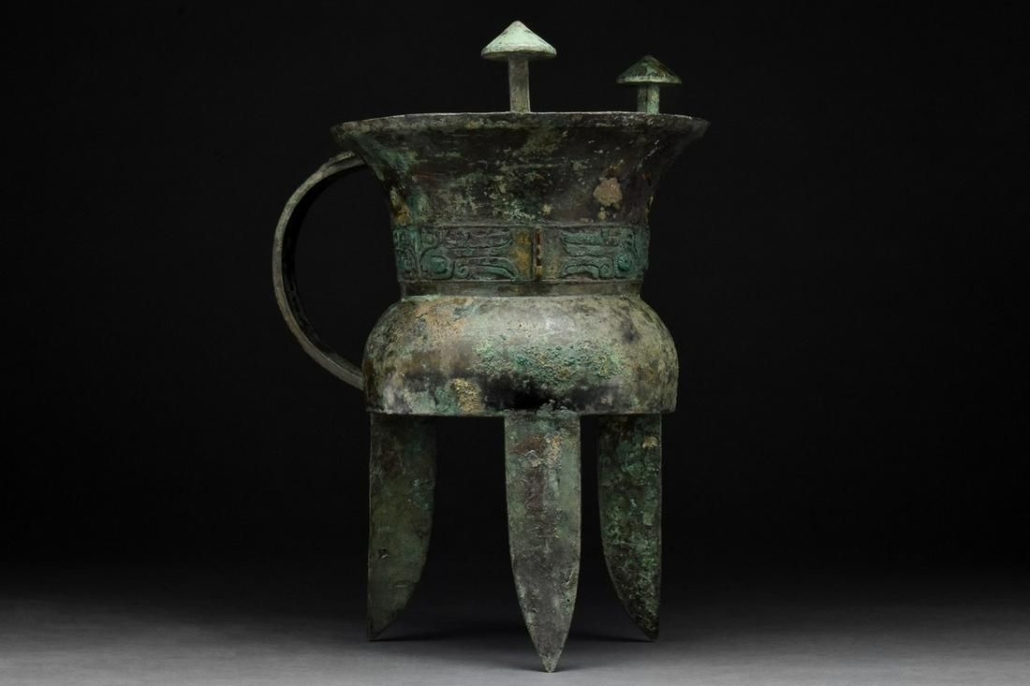 Since the Egyptian Battle of Mediggo in 1479 BC – the first armed conflict recorded by eyewitnesses – history has been plagued by one war after another. Scholars are especially interested in the armaments used in battles throughout the centuries, as they create a tangible timeline of technological progress. In the November sale, collectors will find an outstanding array of swords, spear-, mace- and axeheads; and even curious Byzantine pottery Greek fire grenades. 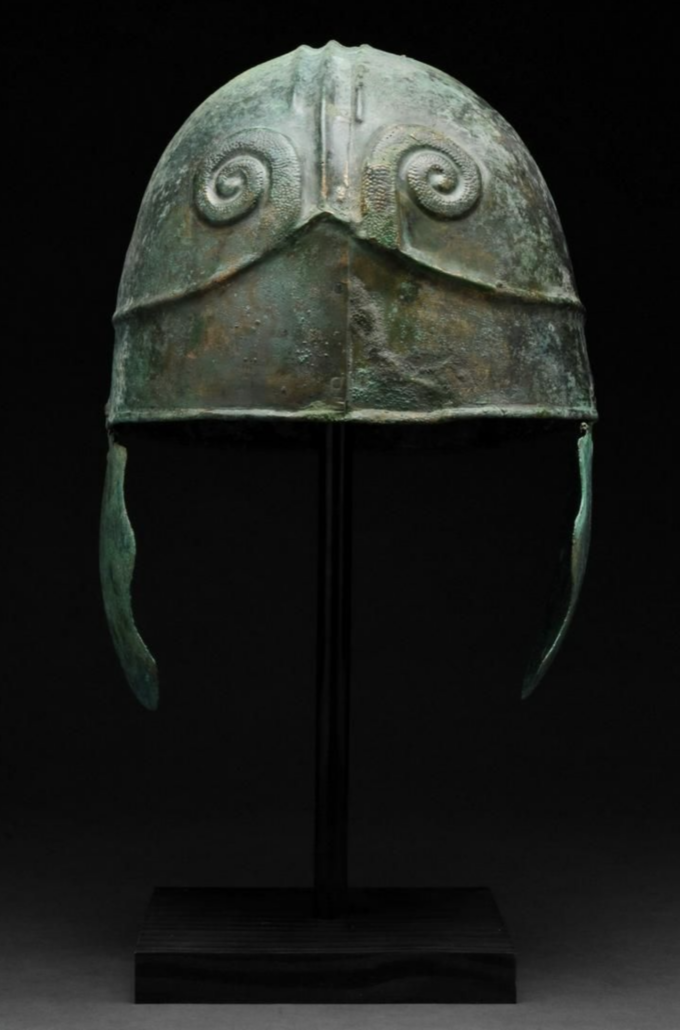 Helmets are always in great demand. Among the sale’s most interesting – and beautiful – examples is an Ancient Greek Chalcidian bronze helmet (shown above) de-embossed with the “Horns of Zeus Ammon.” Dating to circa 500-300 BC, its style suggests it may have been worn by a soldier who fought under Alexander the Great. Auction estimate: £10,000-£20,000. A rare Viking-Age Spangenhelm iron helmet (shown below) comprised of four curved triangular plates with outer supportive bands, was made circa 900-1100 AD and could reach £6,000-£9,000 at auction. Perhaps the most unusual design elements are seen on a rare bronze medieval helmet which is conical in shape and topped by a flared finial. Such helmets were used by the Anglo-Saxons, Franks and Slavs through the 10th century. Its pre-sale estimate is £40,000-£60,000. 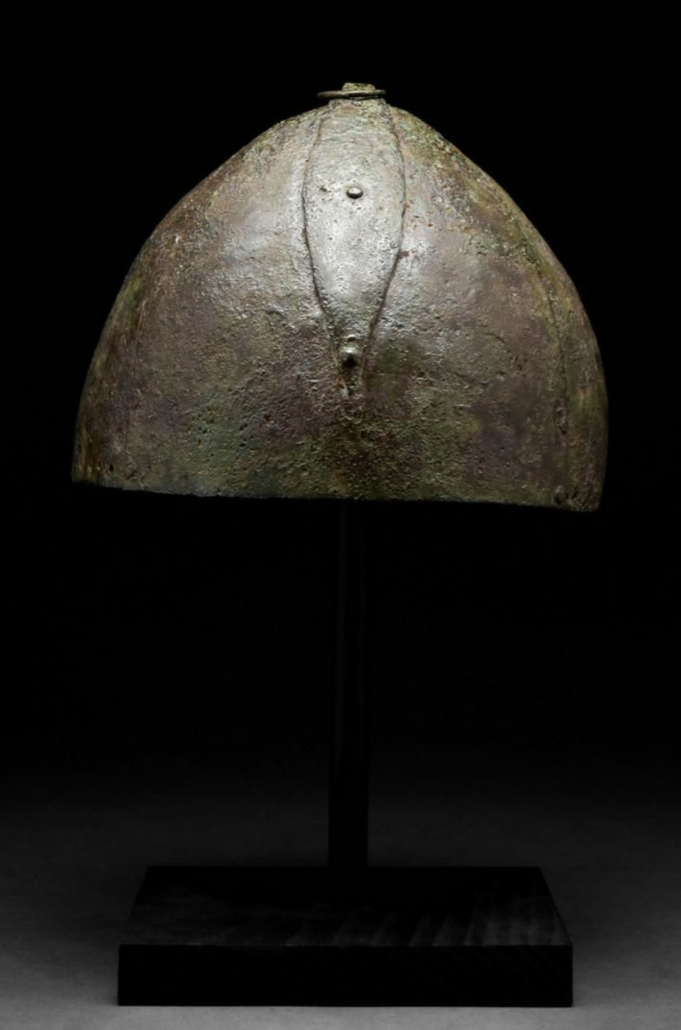 The Ancient Egyptian category includes dozens of tantalizing possibilities. A sculptured gilt wood and bronze ibis (shown at top of page), circa 664-32 BC (Late Period to Ptolemaic Period), is of a type that was sometimes formed as a coffin to hold a sacrificed, mummified ibis. With a long trail of provenance, this particularly attractive artwork is expected to reach £10,000-£20,000. A gesso and painted cedar wood sarcophagus mask, circa 1069-332 BC (Third Intermediate Period to Late Period), has distinctive carved and painted facial features, including mesmerizing oversize eyes and eyebrows, a prominent nose and a gentle smile. Estimate £2,000-£3,000 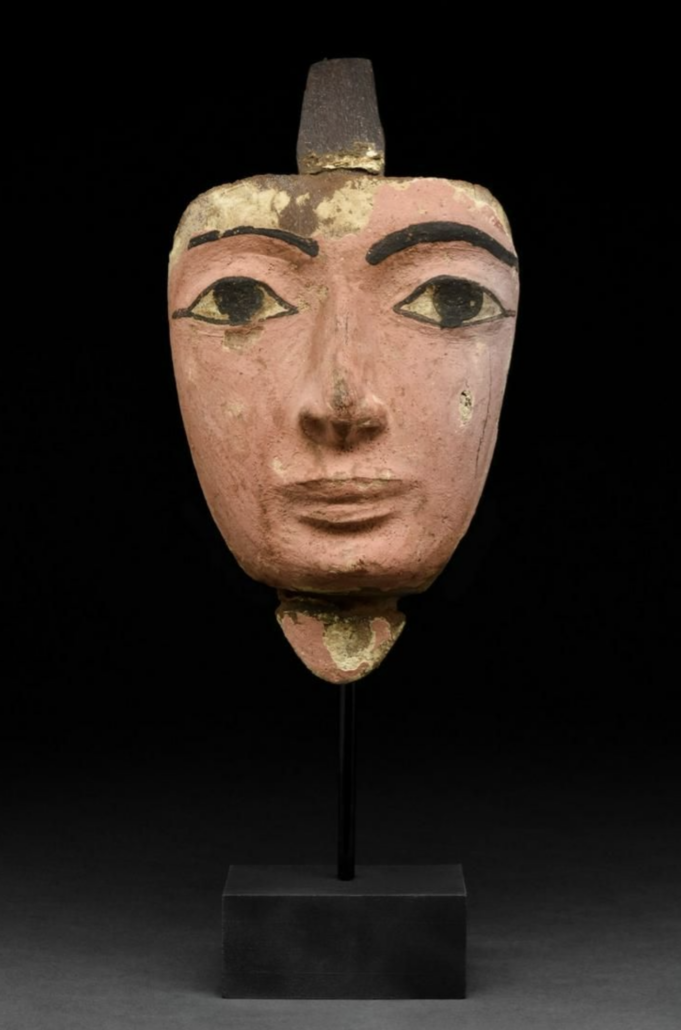 Also worthy of special note is an outstanding pair of Ancient Roman bronze and iron fittings, each comprising a spiral fluted column with an iron rod projecting from and Ionic-variant capital surmounted by a bust of Bacchus wearing a goat pelt. Formerly sold at Christie’s New York in 2012, the pair is offered with a £30,000-£60,000 estimate. 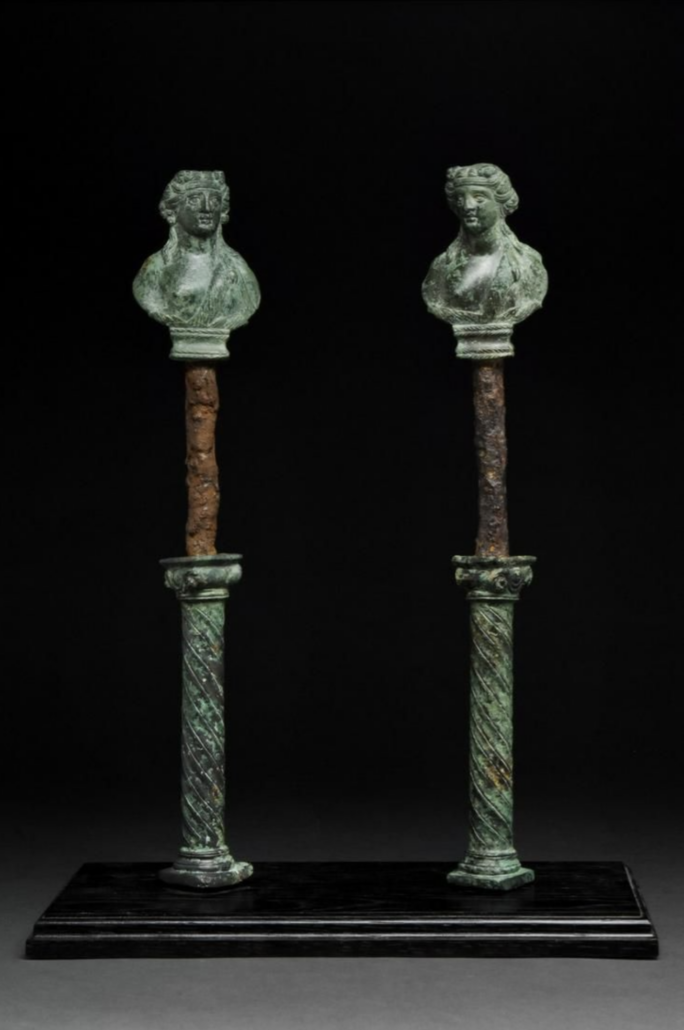 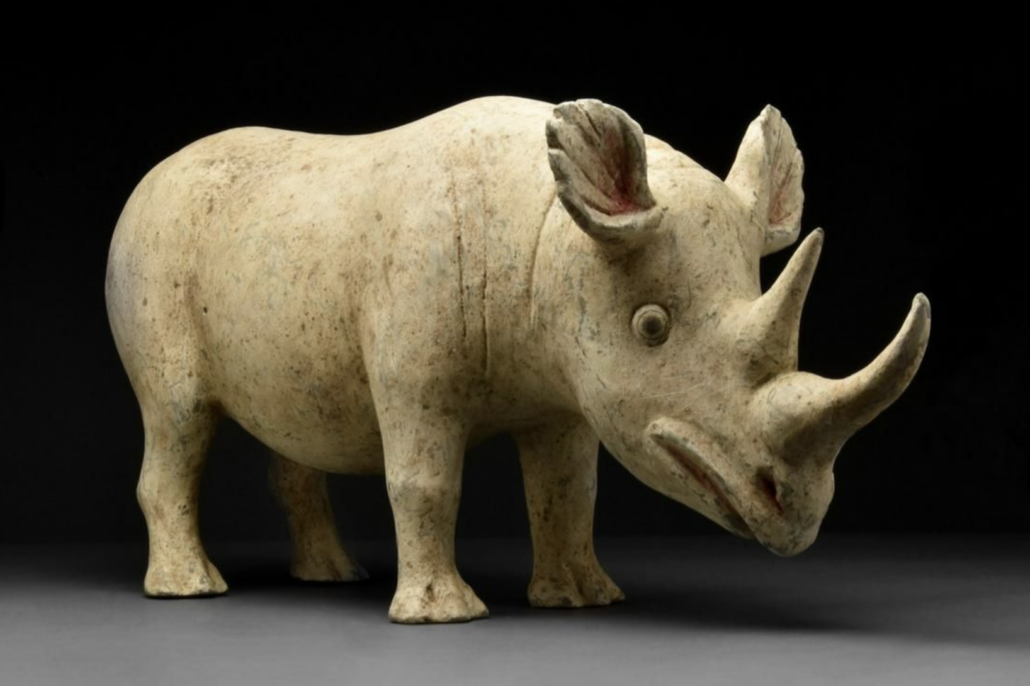 A Han Dynasty hollow-form terracotta rhinoceros, circa 202-220 AD, displays an appealing color palette of cream overall with subtly rose-hued ears. TL-tested at the independent Ralf Kotalla laboratory in Germany, it comes to auction with a £6,000-£9,000 estimate. 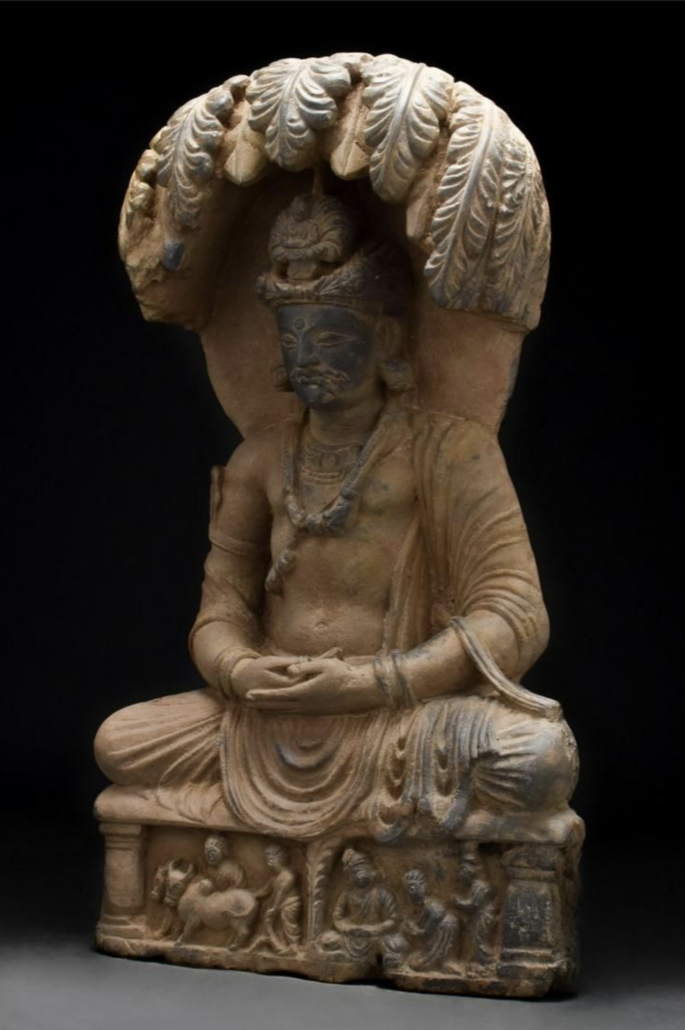 Gandharan grey chlorite-schist statue of Prince Siddhartha Gautama meditating beneath the Jambu tree, circa 200-300 AD, 650mm x 370mm. Similar to an example in the collection of The Metropolitan Museum of Art. Provenance: collection of a London gentleman, formerly in a European collection formed in the 1970s. Estimate £20,000-£40,000 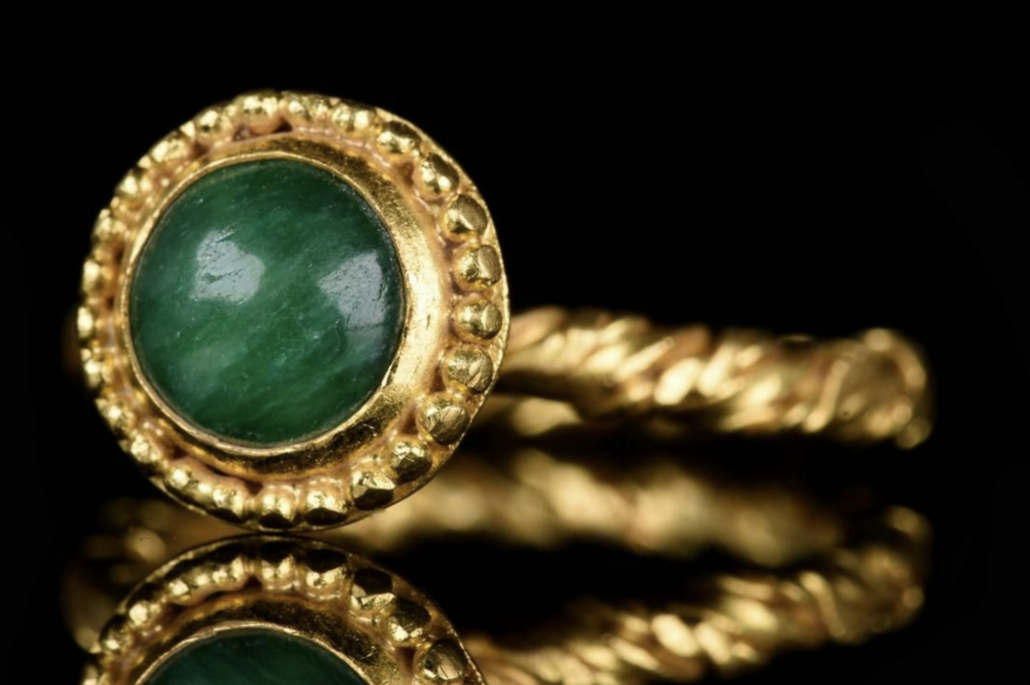 Wearable ancient jewellery remains one of the fastest-growing categories in Apollo Galleries’ sales, prompting the company’s launch of a dedicated department for the specialty. With holiday shopping in mind, bidders will want to pay close attention to the spectacular assortment of Viking, Roman and Bronze Age rings, bracelets, pendants, and necklaces, many of which are set with precious or semiprecious stones in high-karat gold. One of the many highlights is an XRF-tested medieval gold twisted ring with an emerald stone, circa 1300 AD and possibly Byzantine, that comes from a London collection formed in the 1990s. Estimate: £6,000-£9,000

Apollo Galleries is a member of the British Numismatic Trading Association (BNTA) and the Art Loss Register (AR). The company ships worldwide, and all packing is handled by white-glove specialists in-house. 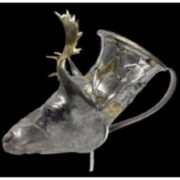 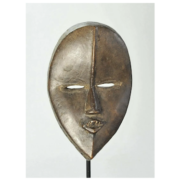 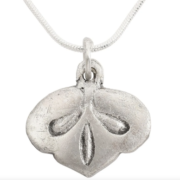 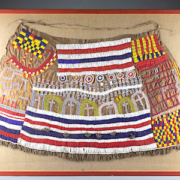 Egyptian bronze cat could claw its way to $120K at Hindman Nov. 18
Scroll to top