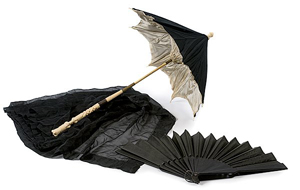 Mary Todd Lincoln’s mourning carriage parasol, black silk veil or shawl, and black silk folding fan. Accompanied by a photocopy of a 1976 affadavit signed by Robert Todd Lincoln Beckwith describing the contents of a trunk found at Hildene upon the death of his sister Margaret "Peggy" Beckwith. Property of the heir of Robert Todd Lincoln Beckwith (1904-1985) and Margaret Fristoe (1901-2009). Image courtesy LiveAuctioneers.com and Cowan’s Auctions.

LOUISVILLE, Ky. (AP) – Though folded and faded, the words on the yellowed papers are as startling as when they when they were first penned 135 years ago: “You are hereby commanded forthwith to arrest Mary Lincoln, who has been declared to be insane, and convey her to the Bellevue Place.”

For nearly 60 years, those historic pages lay forgotten in the basement of the Illinois insane asylum where the 56-year-old widow of America’s 16th president was involuntarily committed in 1875.

Discovered by the asylum owner’s daughter in 1933, the historic papers sat for another 60 years in a desk drawer box in her family’s new home in Louisville, a largely forgotten testament documenting a dark chapter in the Lincoln family’s history.

Now, after the death of the woman who found them, Dorthey Daniels of Louisville, those documents are coming to public light and are slated for auction at Cowan’s (with Internet live bidding through LiveAuctioneers.com) on June 11 – long after some historians thought that any official record of Mary Lincoln’s commitment had been lost or destroyed by Robert Todd Lincoln, mortified over having committed his own mother to an asylum.

Historians say the rare 1875 documents, which are well preserved, provide a unique paper trail to one of the most controversial episodes in Lincoln lore, in which Robert’s motivations, and Mary’s mental state, are still hotly debated by historians and writers.

“We wanted to share them with the world,” said Kim Spargur of Louisville, one of five children of Dorthey Daniels. “I personally hope it goes to a museum.”

Bill Pile, the Louisville appraiser who funneled the papers to Wes Cowan of TV’s History Detectives for auction, said the clutch of papers was initially valued at $10,000. But it may fetch several times more because of interest from major collectors and museums, especially on the heels of the recent celebration of Lincoln’s 200th birthday.

“Nothing else we have so thoroughly documents this fascinating piece of history,” Pile said. “These are very significant.”

Born in Lexington, Ky., Mary Todd Lincoln was known for being strong willed, hot-tempered and prone to depression.

During her years at the White House alongside Abraham Lincoln, she alienated some with her strong ideas about politics, often acting “like a queen” and once getting in trouble for taking bribes, said historian Jason Emerson, whose 2007 book The Madness of Mary Lincoln was based partly on letters from Mary found in a steamer trunk formerly owned by Robert Todd Lincoln’s lawyer.

After her husband’s assassination in 1865, Mary moved to Chicago, living for a time in Hyde Park. Although some observers had considered her mentally unstable for years, by 1875, Robert Todd Lincoln, a Chicago lawyer and her only surviving son, had become increasingly worried about her erratic behavior.

She would walk around with more than $57,000 sewn into her petticoat, visit clairvoyants in attempts to communicate with the dead, and express fears that someone was trying to slip poison into her drink. Her worried friends once believed she was going to jump out of a window to escape a nonexistent fire.

Historians say her episodes were likely difficult for Robert, her eldest son.

With Abraham Lincoln often traveling during the family’s early years, mother and son were extremely close. Mary Lincoln often bemoaned Robert’s absence in letters and called him “more and more every day just like his sainted father.”

Nevertheless, in May 1875, Robert initiated court proceedings to have Mary Lincoln involuntarily committed. After her arrest and a three-hour trial, a Cook County, Ill., jury found her insane, and an arrest warrant was issued to have her taken to Bellevue Place in Batavia, an asylum for those who could afford better than the state hospital.

Mary Lincoln, who didn’t believe she was mentally ill, considered it “the ultimate betrayal” by her son, Emerson said.

Bellevue catered to wealthy women and offered bed rest, piano and croquet. It was advertised as a place for “refined but mentally unstable females.” Many of its residents were given opiates and other medicines of the day.

“Mary Lincoln … wasn’t locked in the room; she could take rides during the day and she had lunch or dinner with (asylum owner) Dr. Richard Patterson and his wife,” said Chris Winter, curator of Batavia’s Depot Museum, which displays the bed and dresser Lincoln used at Bellevue. “But she was very unhappy there. She didn’t want people to think she was insane.”

She came to believe that Robert Lincoln was trying to steal her money, a view stoked by her friends, the influential abolitionist and feminist Myra Bradwell and her husband, James Bradwell, a judge and attorney.

Letters show Mary Lincoln grew furious at her son and worked through the Bradwells and others to make her case for her own sanity. They penned newspaper editorials and lobbied Dr. Patterson and Lincoln friends and family.

“They got a newspaper reporter to interview Mary, and in the story he declared her sane,” Emerson said.

Mounting public pressure led to her release in September, when a Chicago court declared that her reason had been restored.

Four years later, Mary traveled to Europe, still upset with Robert Lincoln. She refused to speak to him for five years, but wrote him angry letters, including one in which she said: “You have tried your game of robbery long enough.”

In 1882, the year before she died, Mrs. Lincoln and her son purportedly met and reconciled when Robert was traveling as President James Garfield’s Secretary of War.

Throughout the years, there has been much debate over Robert’s motivations – and the extent of Mary’s true problems – in trying to make sense of the episode.

It’s been an important point of debate among Lincoln scholars, partly because many argue over what impact her mental state had on her husband.

“Some people think yes, she probably did need help after losing her sons and husband. Others think her son put her away to get her out of the picture as he was struggling to make a name for himself as a Chicago lawyer and didn’t want the embarrassment,” Winter said. “A lot could have had to do with drugs. They would give women laudanum and opium all the time. Dependence could have put her into wicked moods.”

Emerson said after researching a book, he’s come to a more modern-day conclusion.

“I believe she suffered from bipolar disorder,” he said. “I think Robert Lincoln was doing what he thought was best and necessary, to protect her from her own behavior and other people.”

Kim Spargur’s great-grandfather, Frederick Daniels, purchased Bellevue Place from Patterson and operated it until he died in 1928.

Spargur’s grandfather took it over, and in the early 1930s, Spargur’s mother, then a child, found the Lincoln documents in the asylum basement.

The lot includes a photo of Frederick Daniels, a letter to Mary Lincoln from a friend or relative consoling her, assorted official documents and a 1933 newspaper clipping from the Aurora Beacon-News, on the discovery of the documents.

In Louisville, Spurger said the family over the years would occasionally look at the papers, or talk about the contentious, fascinating story that they told.

But after her mother and father both died in recent years, the surviving family members decided to sell the documents so the public might appreciate them as well.

“It’s a bit hard for the family, it feels like the end of an era,” Spurger said. “But they’re a part of history, and they should be seen, not just sit in a drawer.”

View the fully illustrated catalog for Cowan’s June 11 auction and sign up to bid absentee or live via the Internet through www.LiveAuctioneers.com. 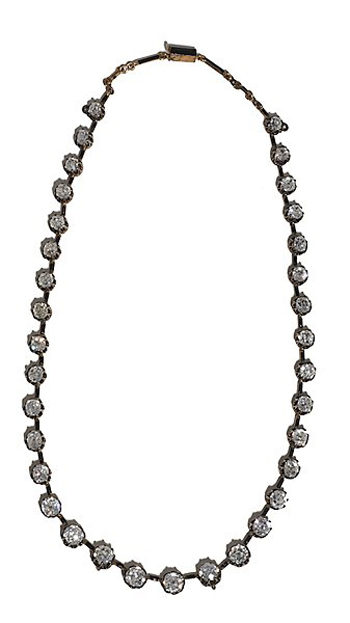 Mid-19th-century diamond necklace descended directly through the Lincoln family. Given the provenance and style, this necklace could have been worn by Mary Todd Lincoln or more likely, her daughter-in-law, Mary Harlan Lincoln. Property of the heir of Robert Todd Lincoln Beckwith (1904-1985) and Margaret Fristoe (1901-2009). Estimate $12,000-$14,000. Image courtesy LiveAuctioneers.com and Cowan’s Auctions. 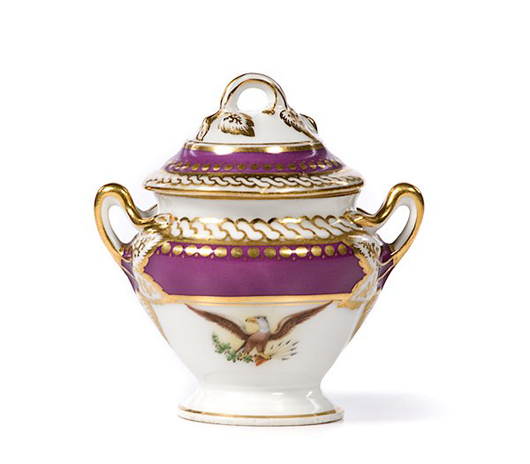 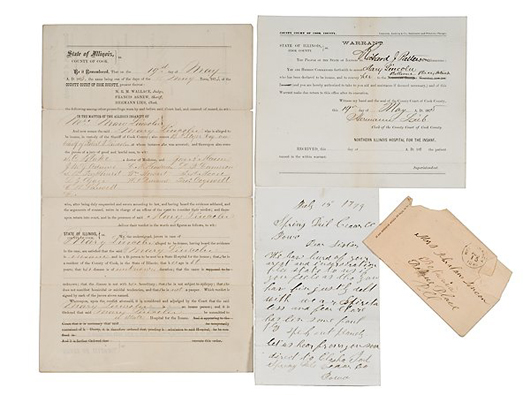 Information from: The Courier-Journal, http://www.courier-journal.com