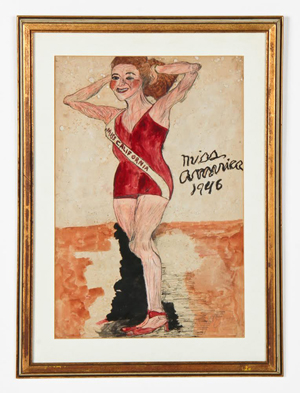 PHILA., Pa. – In its sale “Folk, Self-Taught and Outsider Art,” Material Culture will bring together a rich compendium of artistic works across these categories. A leader in self-taught art, the auction house once again showcases some of the top names in this increasingly popular field, offering excellent opportunities for both established and new collectors. Presenting works by American artists such as Purvis Young, Victor Joseph Gatto, Howard Finster, Justin McCarthy and Rex Clawson, and international stars such as Prince Twins Seven Seven, Jacques-Enguerrand Gourgue and Georges Liautaud, along with many others, this auction is a testament to the vitality of individual vision. The over 320 lots in the sale also offer a wealth of ethnographic and folk art and artifacts.

Leading self-taught art is a spectacular painting by American artist Purvis Young (1943-2010), Blues Man (lot 56). Dating to 1973, the painting on wood portrays a haloed musician with a harmonica and saxophone. The artist’s common themes of the African-American experience and urban life are seen in many of the 14 lots at auction. An untitled mixed media painting on wood panel (lot 53) marries many of Young’s pictorial subjects: jostling city buildings, white horses, and lines of human figures reminiscent of slaves.

American self-taught artist Justin McCarthy (1891-1977) is also well-represented at auction, with 16 lots of his brightly colored expressionistic paintings. McCarthy often took inspiration from pop culture subjects, as with his Miss America 1946 (lot 20), which comes to auction through the collection of Patricia L. and Maurice C. Thompson. Also from the Thompson collection is a painting on board by Mose Tolliver (1925-2006), a self-taught artist from Alabama, depicting one of his smiling round-headed figures (lot 200).

Another top lot in American self-taught art is Landscape with Wildlife (lot 39) by Victor Joseph Gatto (1893-1965). Gatto’s work gains some if its potent energy through its focus on the push and pull of opposing forces, and in this beautiful oil painting, the stunning river valley landscape is juxtaposed with the pack of wolves attacking the deer at the bottom of the frame. A total of 10 paintings by the New York City artist Gatto enrich the auction. A fascinating drawing by Frank Jones (American, 1900-1969), identifies the prickly contoured building as a Chinese Stormproof House (lot 52), with provenance that includes the Janet Fleisher Gallery. Two paintings by American artist, poet and actor Tony Fitzpatrick (b. 1958) include a mixed media drawing of colored pencil and acrylic on slate board with the words “Holy Owl with Dead Saint Goin Back to God” painted on the board’s frame (lot 85). American artist Rex Clawson (1929-2007) is shown in 10 lots of his boldly outlined and prismatically colored paintings, influenced by both Cubism and Central American art, such as his Mermaid and Octopus (lot 147).

Six lots by Howard Finster (1916-2001) appear in the sale; originally a Baptist minister from Alabama, Finster may be one of the best known American self-taught artists, his distinct style recognizable for its use in popular culture in the late 20th century. A pale blue giraffe on cutout board (lot 156) bears many of the hallmarks of Finsterʼs art, incorporating inspirational text and fine detail. American self-taught artist Eddy Mumma (1908-1986), known as “Mr. Eddy,” is represented at auction in seven different lots (162-168), largely his characteristic portraits of men rendered in thick, nonnaturalistic colors. Six mixed-media portraits by Shields Landon Jones (1901-1997), or S.L. Jones, show the West Virginia artist’s stylized portraiture, for which he is best known (lots 169-172).

Leroy Almon’s (1938-1997) Devil Fishing (lot 224) exhibits the Georgia folk artist’s intersection between sculpture and painting in this carved and painted wood relief panel, showing Satan dangling items of temptation to the upstretched arms of mortals. The act of fishing also appears in one of five paintings by Iowan artist Charles W. “Uncle” Howe (1892-1982), aptly titled Just Fishing (lot 135), in which a man and woman, entirely nude, strike the same pose fishing from a riverbank. Contemporary self-taught American art includes five lots by Jim Bloom (b. 1968), led by his mixed media panel One Day in Homeroom (lot 175) and four of Barbara Strawser’s festive naive-style paintings, including an untitled oil painting on wood panel depicting a girl in the midst of flowers (lot 205). Other featured artists in this category are David Tinsley (b. 1951) whose two paintings at auction include the acrylic on panel Girl and Deer (lot 225) and Lonnie Holley (b. 1950), with a mixed media assemblage titled Mask for My Sister’s Baby (lot 223).

Some of the finest lots in the sale are the works of Haitian artists. Jacques-Enguerrand Gourgue (1930-1996), one of Haiti’s most renowned artists of the 20th century, is shown at auction in a surrealist Still Life of oil on canvas (lot 89). The painting comes to auction from the Estate of Edwina Hilton Marks, along with an oil painting on Masonite by Seneque Obin (1893-1977), Capois La Mort a Vertieres depicting a scene from the battle of Vertieres, a major victory in the Second War of Haitian Independence (lot 95), and an untitled oil on board painting by Wilson Bigaud (1931-2010) of a wedding recessional on horseback (lot 90). Haitian-born artist Max Romain (b. 1930), active in New York City, brings to auction seven paintings, opening with King and Queen, (lot 139), a mixed media drawing dating to 1991. Two steel sculptures by famed metalworker Georges Liautaud, one of a pig (lot 91) and one of a smiling pregnant woman with earrings (lot 92), appear in the sale from the collection of Patricia L. and Maurice C. Thompson. Liautaud is largely credited as the source of an important movement in metal art in 20th century Haiti and the inspiration to subsequent generations of artists. Other international artists of note include Prince Twins Seven Seven (Nigerian, 1944-2011), whose seven lots at auction include a piece of ink on unstretched fabric titled Ogum … of Power (lot 78), and Kwame Akoto or Almighty God, (Ghanaian, b. 1950), with 10 lots including the oil on board portrait Covered by the Blood of His Majesty Lord Jesus Christ (lot 69).

Other offerings in sculpture are no less diverse in spirit and tone. The most well-represented in this category is folk art legend Gregory Warmack (1948-2012), or “Mr. Imagination,” with 13 lots of his mixed media creations. Warmack used found objects to create jocular animals and lively faces, often of imagined African kings, as in his Mixed Media Brush Heads (lot 180), in which recycled materials such as buttons and bottle caps make figures out of discarded paintbrushes. These sculptures come directly to the current owner from the artist. Meanwhile, the fanciful vision of American artist Sulton Rogers (1922-2003) can be seen in his phantasmagoric Two Headed Man with Cigar in carved and painted wood (lot 173), where one three-eyed face seems to sprout upwards from another, above an otherwise normal body. Other sculptures in the auction include The Sister, a mask made of found metal and wood on a stand (lot 192) by Jerry Coker (American, b. 1938), a mixed media sculpture of a head, its face painted in a tribal manner, that protrudes from its frame (lot 239) by Gina Gruenberg (American, 20th century), and the equally surreal Bust of a Man in glazed ceramic (lot 240), with birds roosting in the man’s horizontal coiffure, by Thaddeus Erdahl (American, 20th century).

A small collection of Native American artifacts has a provenance that includes early 20th century collector Joseph Grimm, coming to the current owner Robert Panchison through descent. A Northwest Coast Tlingit steel, copper and abalone shell dagger from the 19th century opens the auction (lot 1). Other exceptional items include an early 20th century Plains vest, its front entirely patterned with glass beads (lot 2) that is pictured in an early photo of Grimm’s collection, a turquoise pawn bracelet inscribed to Grimm from the silent film star Edythe Sterling (lot 11) and a beaded necklace owned by Chief Two Guns White Calf (lot 3), a leader of the Blackfoot tribe who may have been a model for the “Buffalo” nickel, and was undoubtedly one of the most famous Native Americans of the 20th century. The necklace, in a frame with descendant hair locks and necklaces, is also grouped with a period chromolithograph of Chief Two Guns White Calf wearing the necklace.

Additionally, the auction presents a true variety of traditional folk art. Eight lots of antique Russian Orthodox icons are led by a 19th century icon depicting the Mother of God with the Christ child, with hand-painted egg tempera and gesso on wood panel, in a gilt wood and kiot frame (lot 306). Other devotional images include five 19th century Mexican retablos on painted tin (lots 296-301), and allegorical earthenware figures from Mexico, with sculptures by Josefina and Demetrio Garcia Aguilar, as in the latter’s painted earthenware plaque, Tree of Life (lot 259). An exceptional Huichol yarn painting, framed, renders a vibrant intersection of animal forms and figures in brightly colored wool in beeswax (lot 253). Other lots include a vintage American bungalow-style birdhouse of painted wood (257), hand-painted folk art crosses, and masks from Tibet, Guatemala, Mexico and Native American tribes. The auction closes with 10 lots of art books, grouped by subject such as outsider art, American folk art, African art, pottery and more. 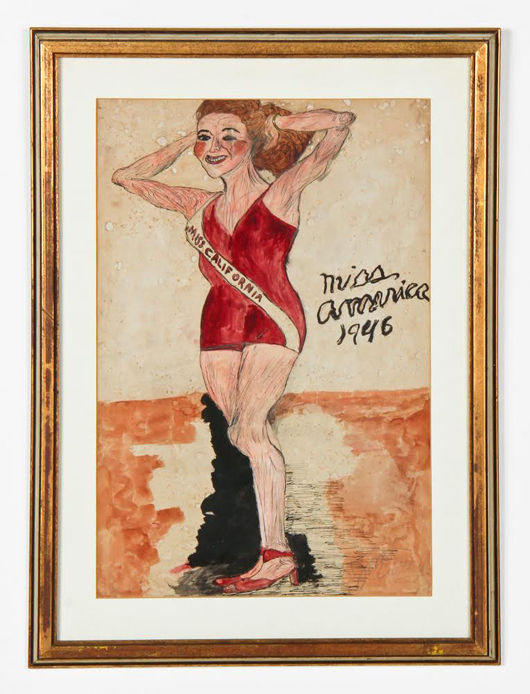 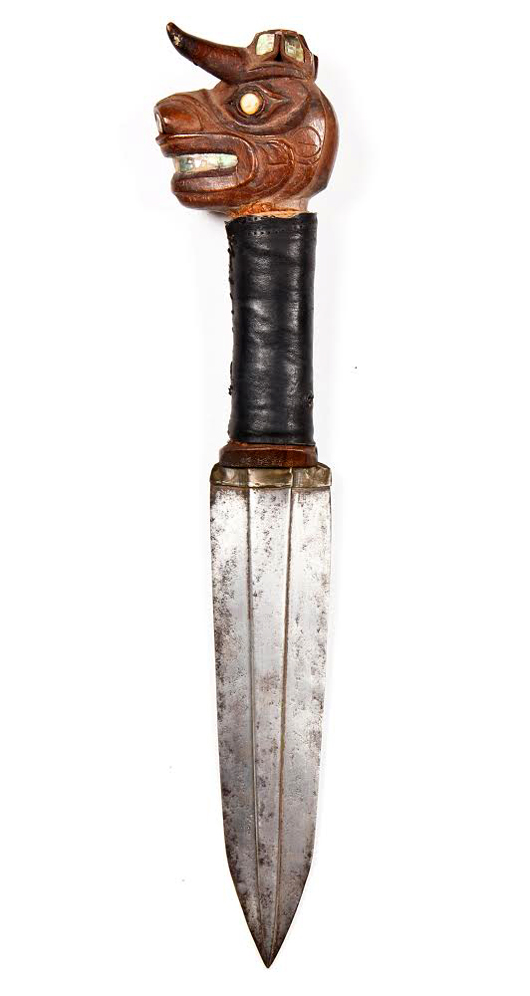 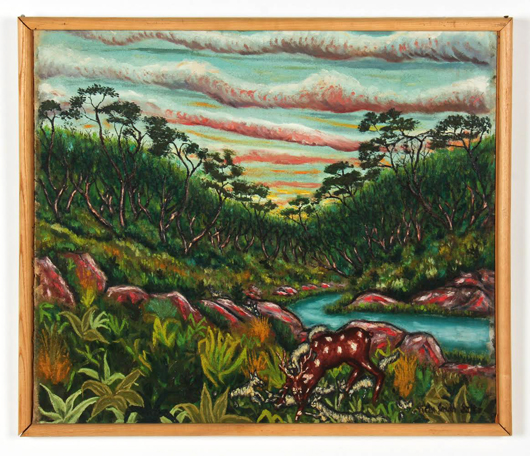 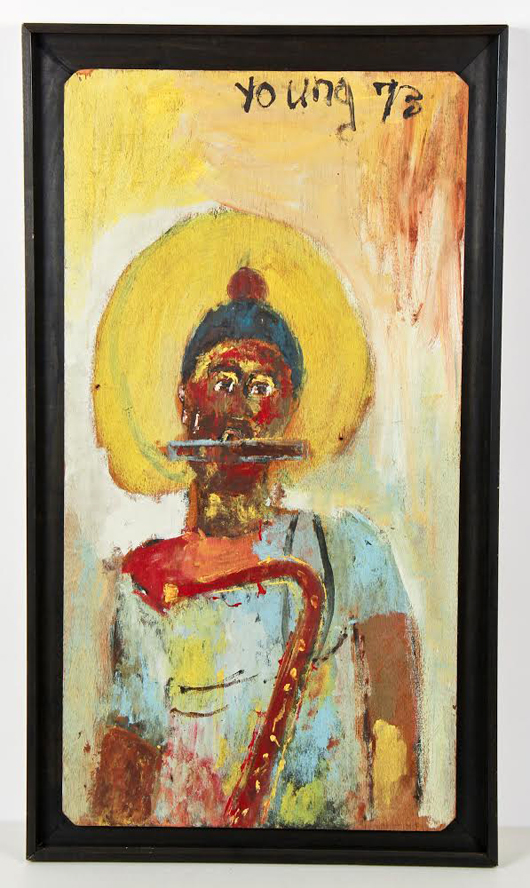 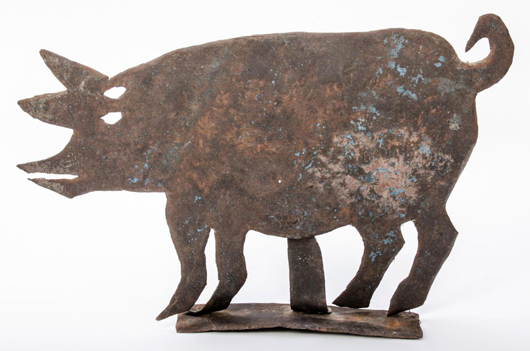 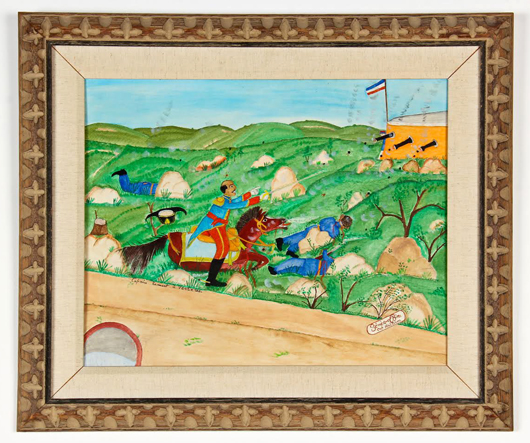