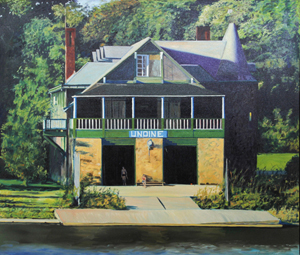 The global health care company’s Philadelphia branch is one of its two large corporate headquarters in the United States, and pieces from its substantial collection have already sold in previous auctions at Material Culture. Many of the artists represented in this collection are from the Philadelphia area or studied at the Pennsylvania Academy of Fine Arts, rendering it particularly compelling to local art collectors, though the quality of the artwork and the inclusion of nationally known artists bring universal interest to the auction. The collection was amassed during the 1980s through the early 2000s. This sale features more than 350 works of art, nearly all of them framed, and ranging widely in size. All of the pieces are sold without reserve, and provide opportunities for any budget and for a broad variety of collectors and connoisseurs.

One of the leading paintings at this auction is a large piece by Robert Natkin (1930-2010), considered by some to be one of the most important abstract painters of his generation. Born in Chicago and trained in the same city at the Art Institute, Natkin engages, in his work, the power of post-Impressionist color, playful texture and lyrical shape. He has exhibited his work in major galleries across the United States, Europe and Japan, and his pieces have a home in the permanent collections of dozens of museums around the world, including the Guggenheim Museum, the Museum of Modern Art, the Whitney Museum, the Brooklyn Museum and the Metropolitan Museum of Art in New York. Natkin’s painting at auction, Bath Apollo, represents a merging of two of the artist’s important series of work, the Apollo paintings, and the Bath series. The Apollo paintings, featuring tangential vertical planes or stripes, were named after the Greek god of the sun and poetry to emphasize the counterpoint of light and color. These bands of color, a precise universe in which Natkin could explore what he called the “visual vibrato” of contrasting shades, also call to mind Nietzsche’s definition of Apollonian aesthetic as one of order. Natkin’s Bath series was inspired by an exhibit at the Holburne of Menstrie Museum in Bath, England in 1974 that was to be accompanied by a catalog of only black and white plates. Natkin took on the challenge this presented by creating an exhibition using only tones of black, white and gray and expanding his textural vocabulary. Applying paint to sponges and rags, Natkin would press these vessels against the canvas, creating a personalized take on pointillism. After the exhibit, Natkin continued to play with this process, but introduced color. The marriage of the Color Bath series and the Apollo paintings are Bath Apollo paintings such as this one. Dated 1980, this Bath Apollo (78 x 168 inches) uses Natkin’s characteristic acrylic paint to create a rippling rainbow of purples, blues, yellows and light reds.

Another abstract work is an extremely large painting, measuring a colossal 6 feet by 20 feet 8 inches, by Douglas Dean Ohlson. A contemporary of Natkin, Ohlson (1936-2010) also employed vivid color, fusing Abstract Expressionism and color field painting in compositions that were often more rigidly geometrical. He frequently worked on the very large scale of the abstract oil shown in this sale. In this piece, his classic vertical bars interlock with horizontal ones around squares of glowing pink and purple. Ohlson was raised on a farm in Cherokee, Iowa, and one imagines the open sky and flat fields as a source of inspiration for his vast landscapes of color. Determined to become a painter, he studied at Bethel College in St. Paul, Minn., and then served three years in the Marines before finishing his degree in studio art at the University of Minnesota. When he moved to New York, he studied at Hunter College until he ran out of money; he began teaching at Hunter four years later, where he remained for 35 years. His works appear in the collections of the Brooklyn Museum, the Metropolitan Museum of Art and the Whitney Museum of American Art. He also received numerous solo gallery exhibitions, including many at the Susan Caldwell Gallery, from which this painting was obtained.

Other abstract works of particular note at the auction include a painting by Murray Dessner (1934-2012) titled Light Bridges. This large scale painting, measuring 90 inches by 72 inches, evokes the moody swirl of water in tones more subdued, but still light-driven, than Dessner’s typical palette. Dessner studied at the Fleisher Art memorial and the Pennsylvania Academy of Fine Arts, where he later taught for many years, and his work is in the permanent collection of the PAFA and the Philadelphia Museum of Art, among other museums and public installations. Another 20th century Philadelphian artist who works in the abstract is Moe Brooker, represented at auction by his mixed media piece Let Me Tell You How It… Brooker trained at the Pennsylvania Academy of Fine Arts and the Tyler School of Art, and he serves as chair of the Foundation Department at Moore College of Art, where he teaches, and the City of Philadelphia’s Art Commission. His 57-inch by 45-inch piece at auction demonstrates the exuberance that is characteristic of his work; the strokes of his oil pastel convey joy, and the heavily layered pigment creates vibrancy and depth. In this work, the backdrop of swooping lines and loose, shaded rectangles is speckled with scraps of paper, postage stamps, and envelope fragments. Brooker’s work is in the permanent collections of several Philadelphian museums, including the Philadelphia Museum of Art, the Pennsylvania Academy of the Fine Arts, the African American Museum, as well as other institutions around the country.

Though featuring many fine abstract works, the auction contains a higher number of fine representational pieces. The Brazilian artist known as Ferjo, born Fernando de Jesus Oliveira in 1946, is showcased at auction in a relatively early piece entitled The Window, (66.5 x 49.5 inches) of 1978. The surrealist touches that have come to typify the artist’s work, such as floating objects and metallic bubbles, do not appear in this painting, though the prismatic shafts of sunlight that zip through the window, distorting space, endow this quotidian scene with Ferjo’s signature magic. The windowsill bears an assortment of four eggs, which become a trademark of Ferjo’s surreal rooms, with a halved eggshell hovering above the floor. While he was studying at the Pennsylvania Academy of Fine Arts, Ferjo began to be increasingly drawn to Cubism, and this painting, from near the end of his time at the PAFA, shows these influences as well as his life-long devotion to interesting use of perspective and technical specificity.

The auction includes many fine landscapes in a variety of genres. A triptych of three drawings by painter and photographer Diane Burko (American, born 1945), depicts the gradiated geological layers of a canyon cast in light. Canyon Wall Triptcyh, dating to 1978, is an excellent example of the kinds of landscapes for which the artist has become known throughout her career. Burko has had more than 30 solo exhibitions at various museums and galleries, and enjoys a place in the permanent collections of the Art Institute of Chicago, the Philadelphia Museum of Art, the Pennsylvania Academy of the Fine Arts, and the Delaware Art Museum, among others. The Grand Canyon series that Burko worked on in the 1970s were chiefly, as this triptych is, works of colored pencil on paper. Each of the pieces in this triptych, titled Canyon Wall Triptych A, B and C, respectively, measure 24 inches by 31.5 inches. Less sweeping but no less intricate in its depiction of nature is the photo realist landscape painting Late Summer Afternoon, by American artist William Nichols. Born in 1942 in Chicago, Nichols projects slides of his own photographs, frequently from parks and botanical gardens, directly onto his canvas. His brushwork is reminiscent of Impressionism’s spontaneity, but the delicate precision of the botanical forms of trees and leaves is unmistakably photographic. Late Summer Afternoon is a lush procession of foliage, the acrylic that Nichols typically employs giving the painting the luminous, fresh feel of natural surroundings. The painting measures 59.5 inches by 87 inches. With over 25 solo shows and appearances in more than twice the number of group shows, Nichols’ work appears in the collections of the Ringling Museum of Art, in Sarasota, Fla., the Milwaukee Art Museum, and the Butler Institute of American Art in Youngstown, Ohio, among others.

Interesting seascapes at auction include a two-connected-canvases work by Joseph DiGiorgio (1931-2000), titled Blake’s Beach. Measuring together at 59.25 inches by 71.5 inches, this oil-on-canvas panorama, with the sweep of the tide only interrupted by rocks in the upper right, is a good example of the monumental landscapes for which he was best known. Born in Brooklyn and trained at the Cooper Union, DiGiorgio painted landscapes around the country in addition to many near his native New York. A shoreline of greater drama can be seen in the Maine coast of Late Afternoon, by marine painter Alphonse Joseph Shelton (American, 1905-1976). Shelton was born in Liverpool, England, but his family moved to the United States while he was still a child. Though trained at the Boston Museum of Fine Arts School, much of his artistic life was spent in Maine, where he spent several seasons at Winslow Homer’s studio in Prout’s Neck, and was active in the artistic community for 25 years, including teaching at colleges and serving as the chairman for the Maine Art Commission.

Several compelling Philadelphian scenes are the fruit of an auction containing so many artists with local ties. A painting of Boathouse Row entitled Afternoon at Undine (49.5 x 57.5 inches) comes to sale from American artist Joseph Sweeney. Born in Philadelphia, Sweeney trained at Philadelphia College of Art (now University of the Arts) and Penn State University, and continues to live in the area, teaching at a variety of local institutions including the Pennsylvania Academy of Fine Arts. His paintings more frequently depict vistas wider than the single building at the heart of the Undine painting, but his excellent capturing of summer sunlight, seen in many of his landscapes, beautifully shows off the architecture of the boathouse and its halo of greenery. Sweeney has done a series of pastels of rowing scenes on the Schuylkill River, many of them later than this 1982 painting of oil on canvas, which may have been an early move towards the subject matter. Another painting by David Robert Brumbach (American, 1948 – 1992) depicts Philadelphia’s famous South Street. This photo realist painting of acrylic on paper dates to 1982, and measures 21 inches by 27 inches. Brumbach was born in Lancaster County, Pa., where he ultimately returned after studying at the Rhode Island School of Design. He was considered Lancaster’s finest realist painter, though he also produced abstract pieces, and occasionally worked in collage. In addition to many gallery shows during his lifetime, his work appears in the Phillips Museum of Art, among others. 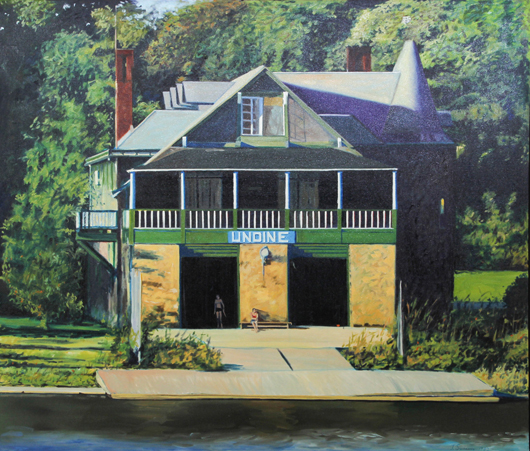 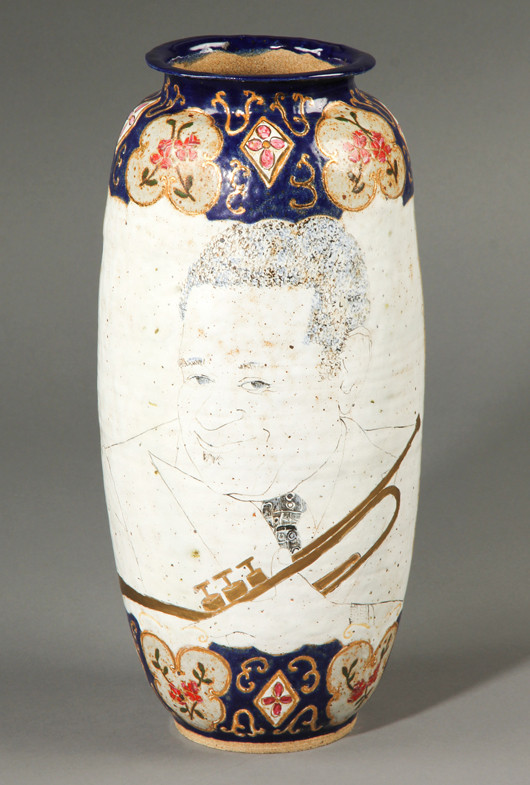 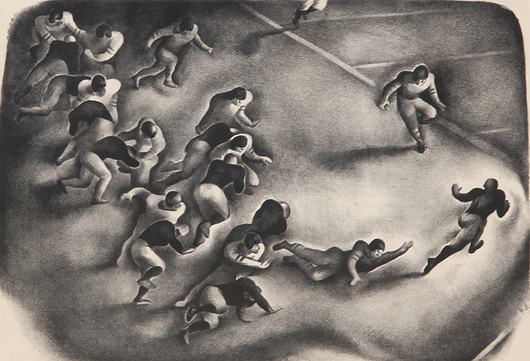 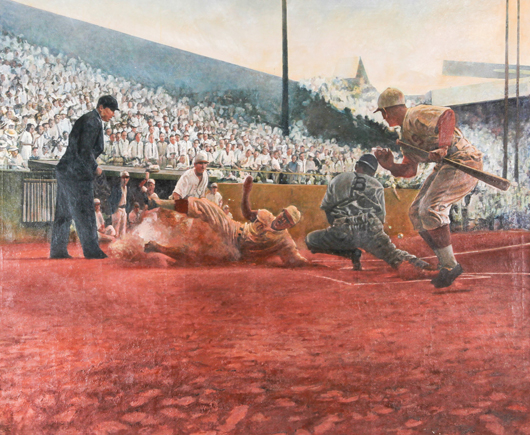