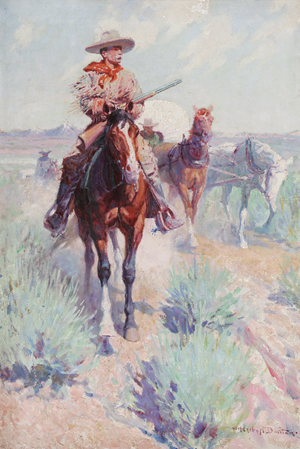 LiveAuctioneers.com will provide Internet live bidding for the Saturday, June 9 auction, which will begin at 10 a.m. PDT.

The selection of lots includes oil paintings, prints, sculptures and works on paper, highlighted by several outstanding pieces in a variety of categories.

American artists comprise over half of the featured lots in the sale. An important and desirable work of art is found in a rare piece by William Herbert “Buck” Dunton. The oil painting titled The Trail Boss (Settlers & Seeds, Civilization’s Forerunners) is estimated at $200,000-$300,000. The Trail Boss was commissioned by the D.M. Ferry Seed Co. in 1910, who hired Dunton to create an iconic image that encapsulated the totality of what it meant to migrate to the West. The painting depicts the trail boss, or wagon train foreman, traveling on horseback through a plains with covered wagons in tow. Dunton’s unique style of painting in bold, patterned brushstrokes of rich color is as distinctive as his themes of the Old West. In demand by high-end collectors as well as those seeking Western genre pieces, Dunton’s works are widely and critically acclaimed with numerous public institutions and museums holding his best work.

Also available is Hermann Herzog’s Farallon Islands, Pacific Coast. The tranquil oil is lovely in its understated subtlety, utilizing muted tones in a realist style. Seabirds in flight dot the ocean scene of crashing waves. The painting measures 22 by 29 inches and has a $20,000-$30,000 estimate.

In striking contrast is Gilbert Gaul’s Unexpected Encounter. The dramatic winter scene depicts a High Sierra cowboy upon horseback unknowingly coming across three wolves ($20,000-$30,000). Gaul received many prestigious recognitions over the span of his career. In 1882 he was the youngest person to be elected a full academician at the National Academy. He was also awarded medals by the American Art Association, the Paris Exposition, the World’s Columbian Exposition in Chicago and the Buffalo Exposition.

Frederick Ferdinand Schafer’s popularity has skyrocketed in recent years and collector interest continues to grow for the quintessential California nature artist. His pieces are known to bring $125,000 at auction and high hopes are held for landscape painting Morning on Feather River, California ($6,000-$9,000). Schafer had studios in San Francisco and homes in Alameda and Oakland, where he died in 1927.

Simplistic in its beauty is William John Whittemore’s John Dickerson Farm, 1901 ($4,000-$6,000). The rural scene of barns among a country landscape is played out in shades of rust tones, conveying a crisp, autumn feel to the piece. Whittemore’s painting career spanned an impressive 65 years. He also studied under renowned teacher J.J. Benjamin Constant and Jules Joseph Le Febrve at the Academie Julian.

Another wonderfully understated oil is George Frederick Bensell’s The Watering Hole ($3,000-$5,000). The landscape scene is painted in shades of sepia and centers naturally formed rocks scattered among a declining forest. A misty mountain surrounded by billowing clouds complete the background of the painting. Bensell was well-known for commissioning portraits, landscapes, historical and “poetical genre” subjects for his wealthy clientele. He is also recognized as a cofounder of the Philadelphia Sketch Club, one of America’s oldest existing artists’ groups.

Notable offerings from international artists compose many fine sale lots as well. From Spanish painter Emilio Grau Sala is the lively Paddock en Normandie. The late 1950s, early 1960s modernism racehorse scene is in absolutely pristine condition. Bought from a gallery, it then remained in a private family estate for two generations. The vibrant oil depicts horse race revelers consorting with a jockey as additional jockeys upon horses and patrons mill about the scene. The vivacious brush strokes and vibrant colors bring a palpable energy to the painting, a piece sure to draw strong collector interest ($18,000-$26,000).

Wolf von dem Bussche began his career as a painter, but despite the positive response to his work he was never completely fulfilled by the medium. As a result, he made the transition to photography. His sensibilities as a painter remained evident in his photographs as he continued to address thematic issues that interested him in his former career. The German artist is perhaps best known for his images of the World Trade Center Towers in New York City. Michaan’s is pleased to have a portfolio of 12 silver gelatin prints depicting the World Trade Center and Washington Square. The collection provides a reflective tribute to some of von dem Bussche’s most compelling work ($10,000-$15,000).

French artist Jehan Georges Vibert’s paintings held a prominent following during his career. John Jacob Astor IV and William Vanderbilt included his pieces in their collections, and heiress May Louise Maytag amassed a large amount of his paintings on behalf of the then Bishop of Miami, Coleman Carroll. The Maytag accumulation was eventually donated to St. John Vianney College in Miami. The Cardinal, depicts a Roman Catholic cleric on a garden stroll. The lot includes an informative article of Vibert written by Bill Rau from the Fine Art Connoisseur, April 2011 ($15,000-$25,000).

Another highlight from a Parisian artist lies in Henri Joseph Harpignies’ Washing the Laundry ($6,000-$9,000). The realist painting portrays two handmaidens washing laundry in a bucolic lake setting. Harpignies experienced some of his greatest successes at the Salon as a regular exhibitor and award winner. He also completed the decorative panel the Vallée d’Egérie for the Paris Opéra, shown at the Salon of 1870.

A founder of the Artists’ Association of New Orleans, Bror Anders Wikstrom was a Swedish artist who was at the forefront of the New Orleans art scene in the late 19th century. His offering, Florida Marsh, depicts grand cypress trees growing in a shaded swamp ($4,000-$6,000). His delicate use of light and easy brush strokes make the piece come to life in quite an inspiring way.

For more information please visit www.michaans.com or call the front desk at 510-740-0220. 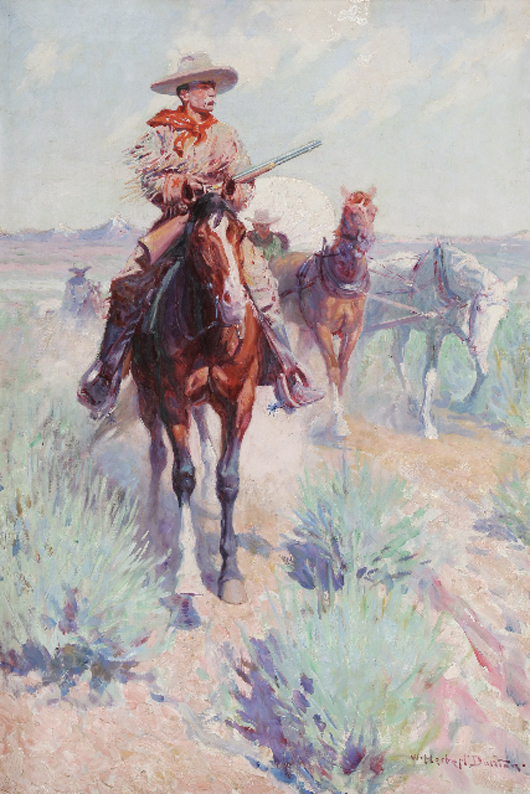 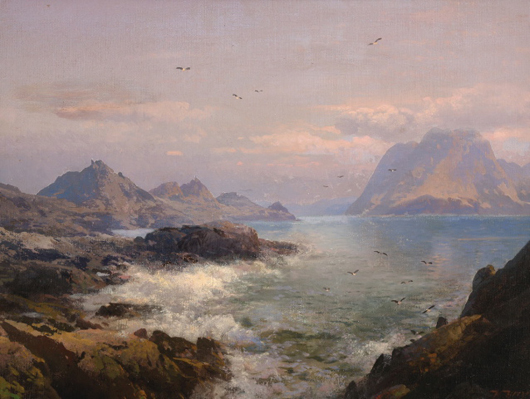 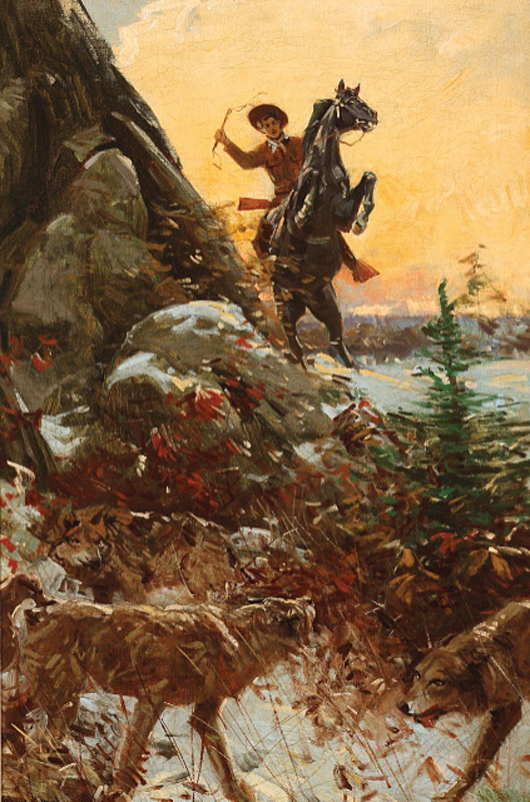 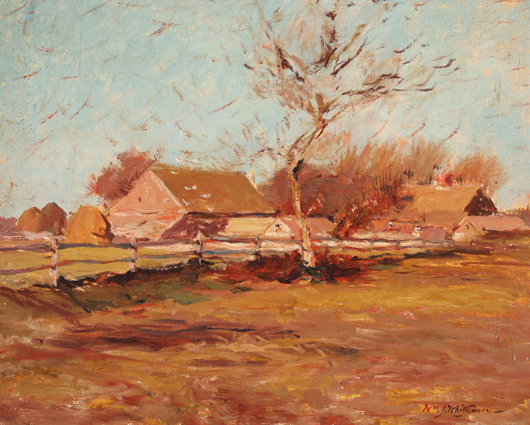 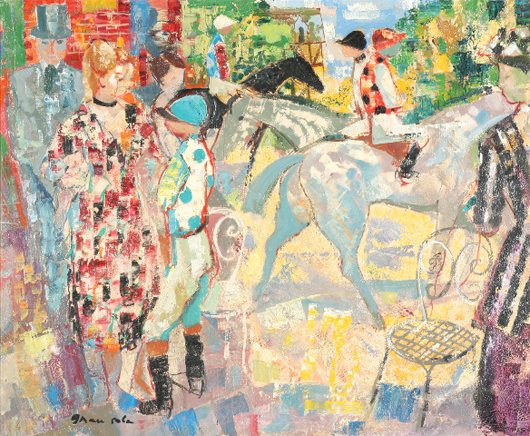 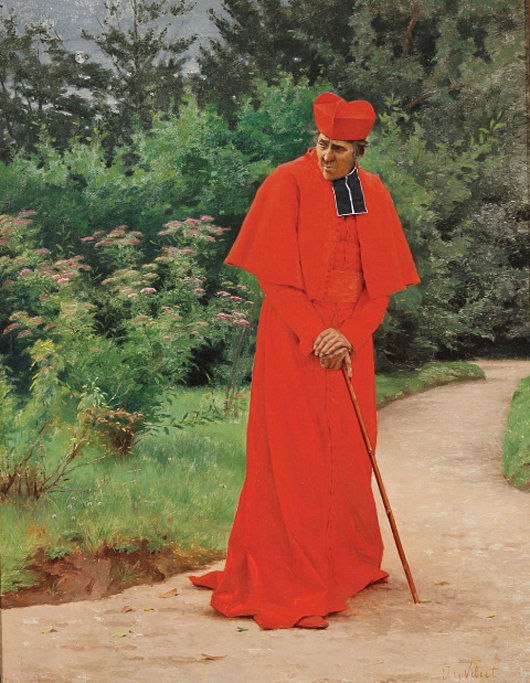 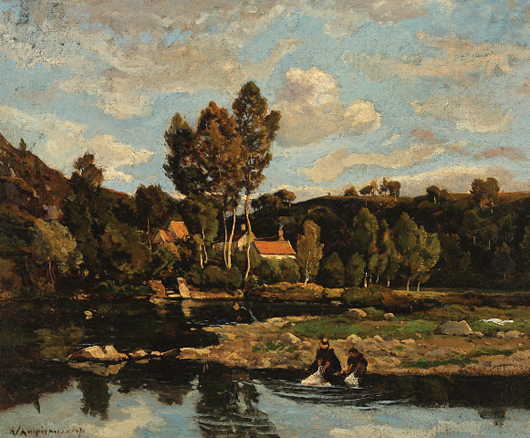