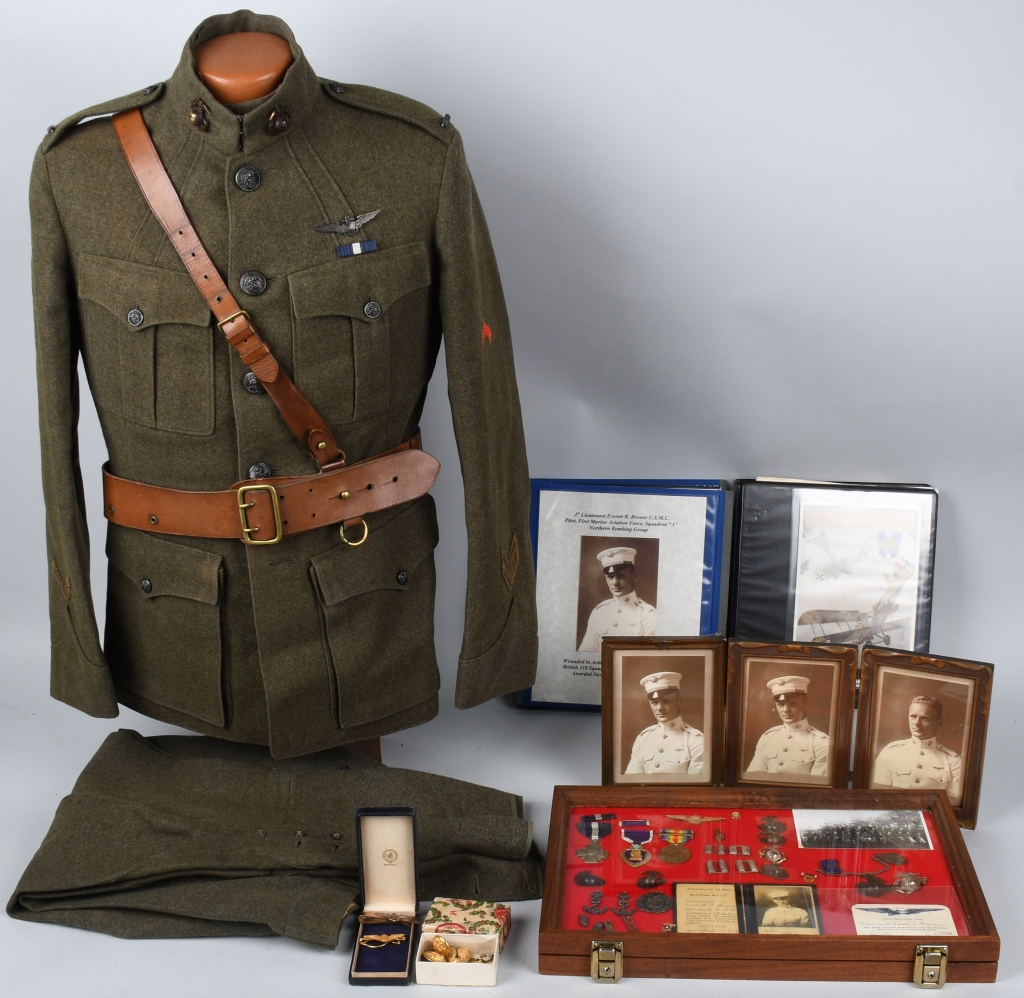 WILLOUGHBY, Ohio – Time marches on, but as any collector of militaria will attest, history marches to a drum that will resonate forever. The uniforms, weapons and paraphernalia of centuries of war serve as tangible reminders that freedom comes at a great price, and it’s all the more reason why such items never lose their appeal at auction, says Miles King, co-owner of Milestone Auctions. The suburban Cleveland company will conduct a robust pre-Memorial Day auction on May 11 featuring firearms and militaria from long-held collections, including a very special archive of D-Day items that will be offered in 11 consecutive lots. Both absentee and Internet live bidding are available through LiveAuctioneers. 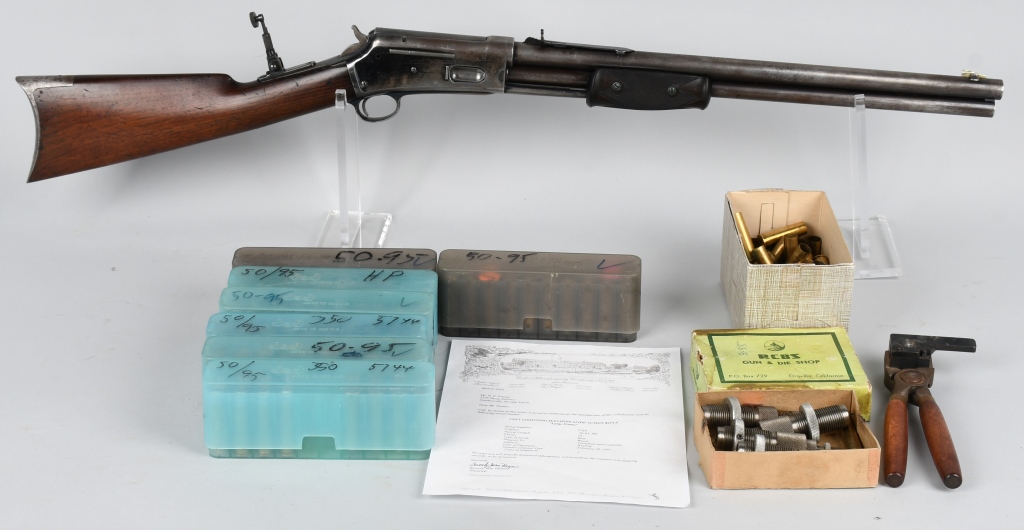 A top entry in the 19th-century weaponry section is a handsome and extremely rare Colt Lightning Express .50-95 rifle. Manufactured in 1891, it comes with ammunition, loading tools, and a factory letter that states it was shipped that year in a one-gun shipment to Bombay, India. It is the only known example with a 19-inch round barrel. “Fewer than 6,500 large-frame Colt Lightning rifles were manufactured between 1887 and 1894, and only a small number within that group was .50-95 caliber,” King noted. The rifle in Milestone’s sale is offered with a $15,000-$20,000 estimate.

Pre-dating the Civil War, a premier edged weapon is an all-original U.S. Navy officer’s Model 1841 Eaglehead sword with scabbard. Made by N.P. Ames, Cutler, the sword is in outstanding condition with a bright, shiny 28-inch-blade and retains almost all of its gilt embellishment. Its decorations also include a Federal Eagle and floral designs, and it is etched United States Navy in a banner surrounded by stars. Estimate: $4,000-$6,000 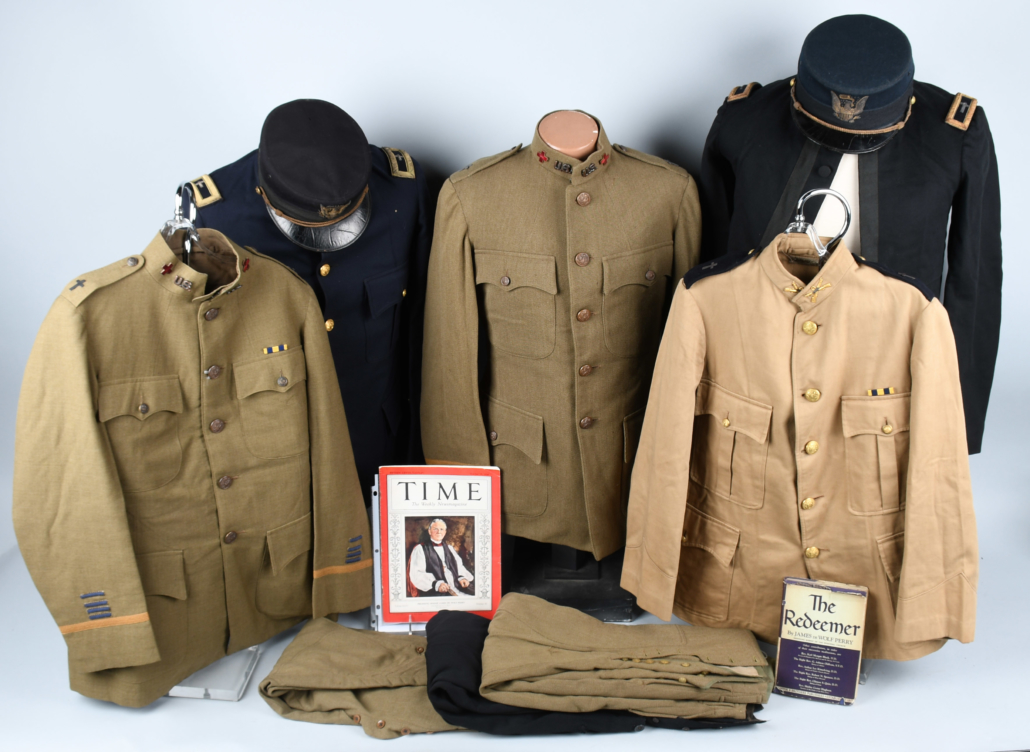 Milestone Auctions is honored to have been entrusted with the Spanish American War and World War I uniforms and mementos of Bishop James DeWolf Perry (1871-1947). A descendant of a long line of military heroes and achievers, Bishop Perry was a distinguished figure in his own right and even appeared on the cover of Time magazine, October 15, 1934. An Episcopal clergyman and prelate, Perry was the 7th Bishop of Rhode Island and the 18th Presiding Bishop of the American Episcopal Church. The auction grouping includes Bishop Perry’s military chaplain’s uniforms, photographs of him wearing the uniforms, an original copy of the aforementioned Time magazine, and other ephemera. Auction estimate: $7,000-$10,000 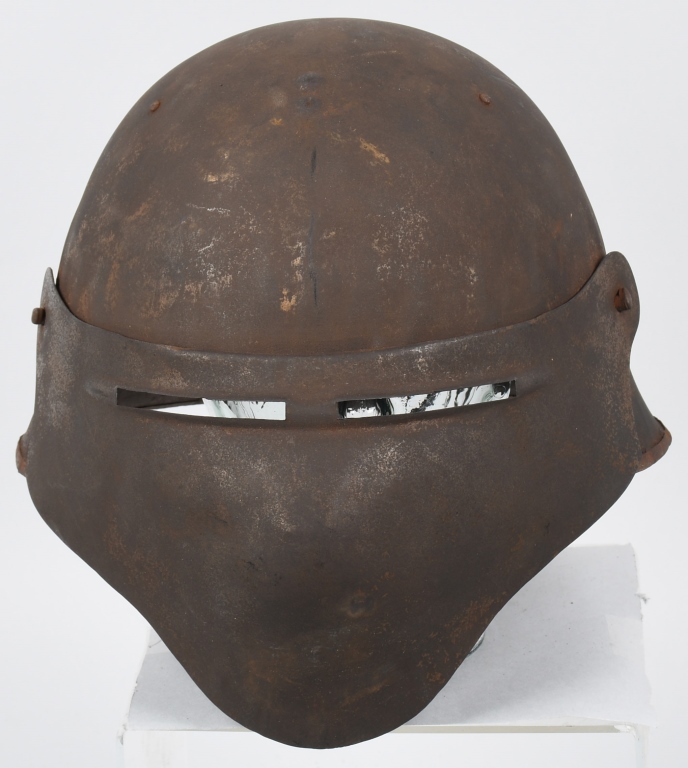 WWI U.S. Model 8 experimental shield, one of approximately 1,300 created by Ford Motor Company in 1918 as a possible replacement to the “doughboy” helmet. One of very few known intact examples. Estimate: $2,000-$3,000

Following the timeline, military collectors are sure to be fascinated by the fantastic career archive of WWI U.S. Marine Corps pilot Everitt R. Brewer (shown at top of page). Brewer was one of only 134 active fliers in the USMC in France. He was the very first Marine to score an aerial kill in combat and was awarded the Navy Cross and Purple Heart for his valiant actions over Belgium against 15 enemy fighter planes. The exceptionally complete archive contains his uniform, numerous medals, photos and even a badly mangled bullet – presumably the one that struck him during his military service in Europe. A highly significant grouping, it is entered in the sale with a $15,000-$20,000 estimate. 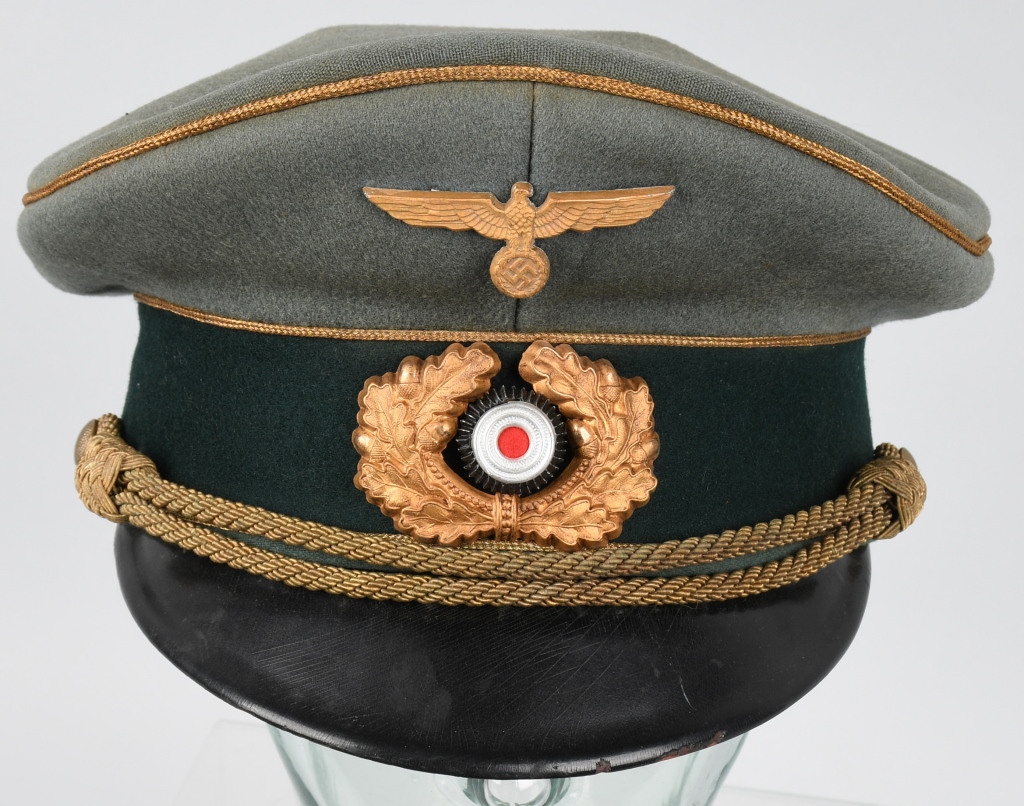 More than 170 lots of Nazi memorabilia will be offered, including flags, edged weapons, medals, patches, jewelry, helmets, apparel, and even flatware. A 1942-pattern Heer General Officer’s visor cap made by Heinrich Kuhner is piped in gold bullion with additional gold-colored decorations, including the national eagle and wreath. In fine condition, it is identified to General Major Josef Prinner. Estimate: $5,000-$7,000.

Also estimated at $5,000-$7,000, a WWII Nazi German Eickhorn Model 1938 TENO officer’s dagger is as mint as any example Milestone’s experts have ever seen, rated “near perfect.” “It came from an advanced collection, and there will be no shortage of bidders chasing it on auction day,” King predicted.

An extraordinary grouping of World War II materials documenting the D-Day Neptune Operation of June 6, 1944 is apportioned into 11 consecutive lots. The archive belonged to Commander Frederick M. Cook USN of the LCF-7 Landing Craft Flak and was consigned to the auction by Commander Cook’s family. A remarkable assemblage, it contains original maps, operational orders, diagrams and descriptions of German batteries and coastal defenses; plus a Neptune monograph issued to only a select few officers who had “BIGOT” clearance. “BIGOT” was an acronym code word for a security level above “top secret,” and it is stamped on every page and map of the monograph. 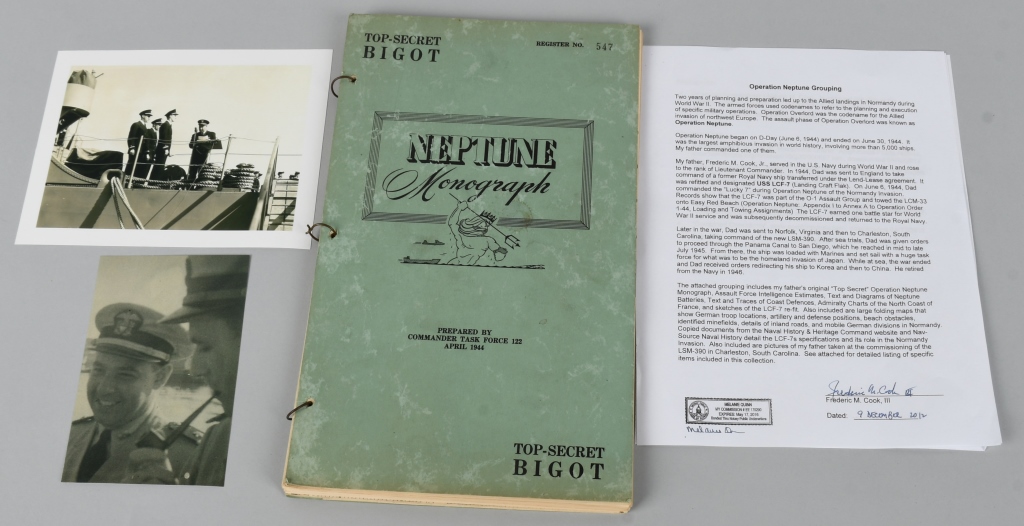 “The book describes Utah and Omaha Beaches in the most minute detail, including the type of sand, tides and currents; landmarks, approaches, underwater obstacles, and both natural and manmade defenses,” said King. A connoisseur’s archive of museum quality, its various lots are estimated from $500-$800 at the lower end to $8,000-$10,000 for the lot containing the actual monograph.

Milestone’s Saturday, May 11, 2019 Historic Militaria and Firearms Auction will begin at 10 a.m. Eastern Time, with absentee and Internet live bidding through LiveAuctioneers. For additional information on any item in the sale, call 440-527-8060 or email info@milestoneauctions.com.