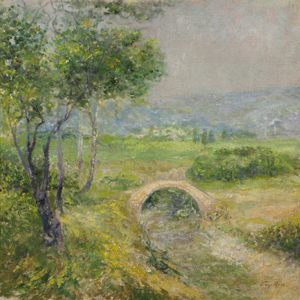 PASADENA, Calif. – John Moran Auctioneers will present the first of its two 2014 California and American Fine Art Auctions on Tuesday, March 25, offering nearly 200 carefully selected works resplendent with the vivid color and light beloved of early 20th century American impressionists and Western artists. Estimates ranging from $700 to $80,000 ensure opportunities for buyers at all levels to bolster their collections with top-notch works, including stellar examples by several of the best-known California painters.

The auction will include a painting by that most sought-after of California impressionists, Guy Rose (1867-1925, San Gabriel). The signed oil-on-linen measuring 13 inches by 13 inches is one of Rose’s more ethereal, loosely structured works. It depicts a French countryside scene with a bridge arching over a stream amid lush green grass using feathery brushwork, dissolving solid forms in hazy light and color much in the manner of Claude Monet, Rose’s friend and mentor during his long stay in Giverny. The work is estimated to realize $30,000-$40,000

One of the top lots by value, assigned an estimate of $60,000-$80,000, is a landscape by Hanson Puthuff (1875-1972, Corona Del Mar) that exemplifies the California impressionists’ taste for timeless scenes celebrating the grandeur of nature, devoid of people and all reminders of civilization. The 40-by-60-inch oil-on-canvas portrays an expansive and serene foothill scene in soft colors and textures, the foreground populated by nothing more than venerable oak trees.

Positively vibrating with energy, on the other hand, is Mount San Jacinto by John Frost (1890-1937, Pasadena). A tumult of strongly contrasting, bright purples, greens and oranges laid down in a complex network of highly textured, varied brushstrokes topped with flecks of yellow portrays dappled light filtering through tree leaves and reflected on water, with the distant mountain in the background. This superb work is estimated to bring $50,000-$70,000. Another work by Frost, illustrating his versatility as a colorist, is Eaton Canyon, showing the mountain slopes above Pasadena bathed in warm autumnal light. Subtler and more subdued than Mount San Jacinto, rendered in muted oranges and lavenders with deep blue shadows in a softly blended mosaic of short, blunt daubs, the 30-by-36-inch canvas is also offered for $50,000-$70,000.

William Wendt (1865-1946, Laguna Beach) and Edgar Payne (1883-1947, Hollywood) are also well represented. Wendt’s large oil titled Sycamores, a lively study of the strong shadows cast on flat, grassy ground by a group of tree trunks with thickly textured bark, beyond which can be glimpsed lavender mountains, is estimated to bring $40,000-$60,000. Payne’s view of the San Gabriel range near Sierra Madre, Calif., portrays the solemn silence and stillness of a rapidly falling dusk draping the steep slopes in richly saturated purples and pinks, watched from the valley floor by dark trees in deep green shadow (estimate: $30,000-$50,000).

Other California landscapes of note include a majestic cloud study by Paul Grimm (1891-1974 Palm Springs), composed of a wide swathe of sky filled with dramatically slanting, backlit clouds anchored by the solid forms of a narrow strip of hilly landscape stretching along the bottom edge of the canvas. The large work could easily surpass its estimate of $7,000-$9,000. A more sheltered scene is Harvest Time by William Alexander Griffith (1866-1940, Laguna Beach), a nostalgic homage to agrarian life depicting figures bailing hay, nestled in the embrace of the golden hills of Laguna Canyon. Yet another superb depiction of the sparkling white light specific to California, it is estimated to realize $15,000-$20,000.

While examples of California landscape predominate at Moran’s sale, buyers will find many other subjects, such as a marvelous daytime street scene brimming with figures set in San Francisco’s Chinatown by Jules Pages (1867-1946, San Francisco) (estimate: $10,000-$15,000). Moran’s is also pleased to offer a rare opportunity to acquire a work by Anna Katharine Skeele (1896-1963, Pasadena). Estimated at $10,000-$15,000, Aspen Dance depicts Native Americans performing a ritual dance in an adobe courtyard, the simplified, flattened forms of the figures and buildings boldly colored and outlined in black (estimate: $10,000-$15,000). The painting displays Skeele’s great sensitivity toward Southwest Native American subjects, developed during numerous trips to New Mexico and Arizona, as well as her talent for manipulating space and reducing complicated forms to a stylized pattern.

Updated highlights are viewable at www.johnmoran.com. 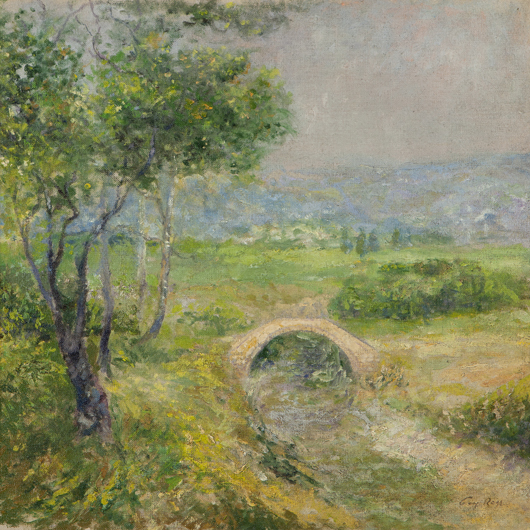 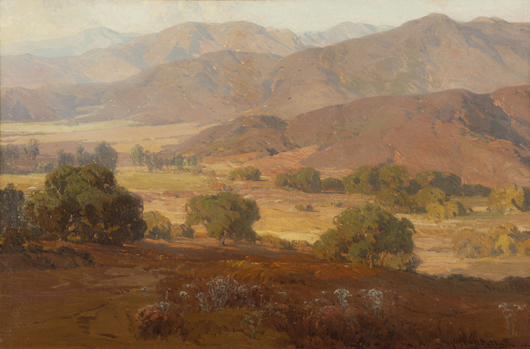 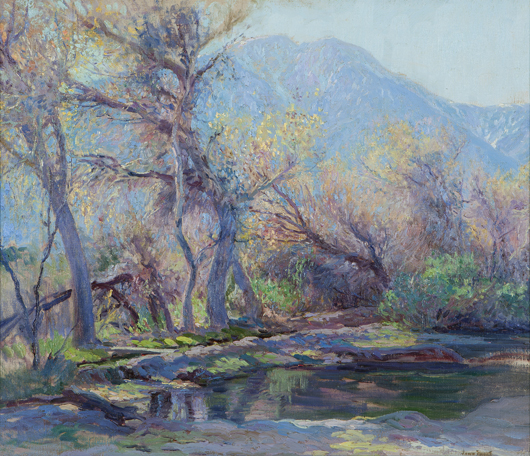 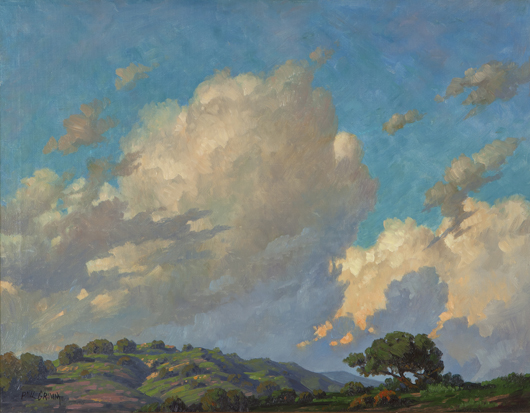 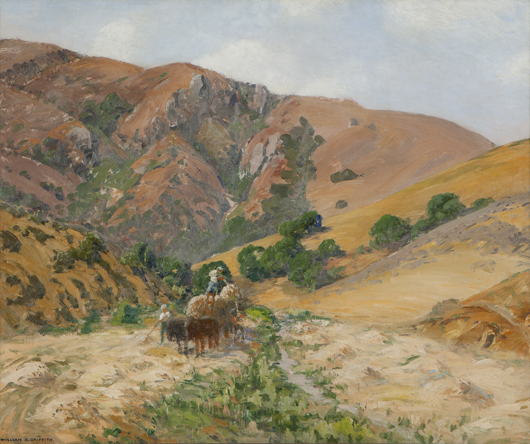 Yet another stunning California landscape is this oil by William Alexander Griffith, which Moran anticipates will fetch $15,000-$20,000. John Moran Auctioneers image. 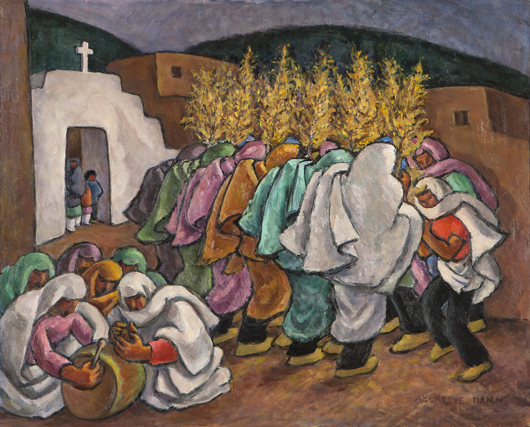