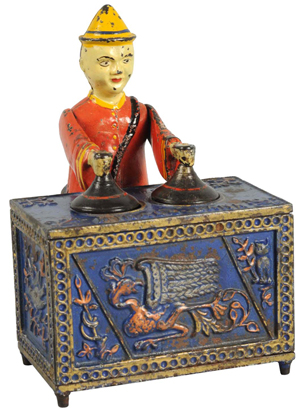 DENVER, Pa. – Morphy’s will usher in its busy slate of fall sales with a big three-day auction of antique toys, banks, dolls and sports memorabilia, Sept. 13-15. A number of exceptional collections have been consigned to the event, including the Al Winick mechanical bank collection, the Jack Matthews toy soldier collection and the Ed Sandford Japanese die-cast robot collection. Internet live bidding will be available through LiveAuctioneers.com.

The remainder of the session is devoted to the ultra-pristine Ed Sandford collection of die-cast robots. Most of the robots in this collection were made in the 1960s by companies whose designs are now very collectible, e.g., Popy, Clover, Takara and Bandai. The highest-estimated robot is a mint/boxed Popy black Daltanious whose color scheme and silver box were produced exclusively for the Japanese market. Collectors consider the black Daltanious one of the hardest to find of all Godaikin-style “briefcase” robots, as they were made in extremely small runs and very seldom become available for public purchase. Estimate: $6,000-$9,000.

Friday’s session begins with 150 holiday lots. A 24-inch Santa candy container with composition face is expected to make $2,000-$4,000, while a 1920s electrified Santa window display carries a $1,000-$2,000 estimate. The Christmas lots will be followed by a nice selection of Halloween items, including 50+ early celluloid novelties.

Morphy’s will take great pleasure in presenting the toy soldier collection of Jack Matthews, one of the world’s foremost composition soldier collectors and a renowned author on the subject of military toys and figures. The Sept. 14 session contains part I of the Matthews collection, which was amassed over a 40-year period and comprises more than 2,000 scarce composition figures from the O.M. Hausser (Elastolin, Pfeiffer) and Lineol companies. In addition to its wealth of rare soldiers, this outstanding collection is bolstered by Tipp airplanes and Tipp, Hausser and Lineol vehicles, with the star attraction being a coveted Hausser half-track with 11 crew and riders. A premier piece, it is estimated at $3,000-$4,000.

The Jack Matthews collection features several hundred figures acquired from the early-1980s auctions of the Hausser Archives and includes more than 100 different flag bearers. In addition, the Matthews collection incorporates the entire Reggie Polain collection, which Jack purchased privately in 1978.

Part I of the most exceptional collection of comic character and Western wrist, pocket and lapel watches ever to be offered at Morphy’s will be apportioned into more than 100 lots. Most retain their original boxes. Among the pocket watches, the most highly valued examples include Buck Rogers, Superman, Skeezix, Moon Mullins & Kayo; Popeye, and an extremely scarce Betty Boop. The wristwatch selection includes all of the known Disney character watches, many Western favorites and several great rarities: a boxed Superman, Three Little Pigs, boxed Babe Ruth with a classic baseball inner presentation box, and a Mickey Mouse watch with “Fred Astaire” box with top hat and cane.

More than 100 lots of antique and vintage sports memorabilia will be up for bid. Rare baseball games include an 1886 McLoughlin Brothers “Game of Base Ball,” and a pre-1920 “Major League Indoor Base Ball Game.” They are followed by 17 late-19th century baseball photos – similar in style to cabinet photos – that came out of a house in upstate New York. Some of the pictures were staged studio shots, and nearly all say “New York” and are dated either 1887 or 1888. Some advertise a tobacco company, such as Gypsy Queen Cigarettes, Mayo & Bros., Bat Chewing Tobacco or Home Run Stogies.

An excellent mix of mementos includes early nodders, pennants, Hartland sports figures and a number of autographed items with letters of authenticity. There are gloves, bats and signed balls, the most important of which is a 1957 Milwaukee Braves Championship ball signed by the entire team (including Hall of Famers Hank Aaron and Eddie Mathews), with LOA.

A Pennsylvania collector was the source of an exceptional collection of approximately 100 top baseball players’ autographs, amassed primarily in the 1950s. Also, the sale includes an autographed ball, glove and bat from Pennsylvanian Pete Gray (1915-2002), who played in the Major Leagues in spite of having only one arm.” During World War II when so many of the star players were away, Gray got his chance to play semi-pro as well as left and center field for the Major League St. Louis Browns. He had learned to bat and field one-handed, catching the ball in his glove, then quickly removing his glove and transferring the ball to his hand in one motion. All three items to be auctioned come with an LOA. 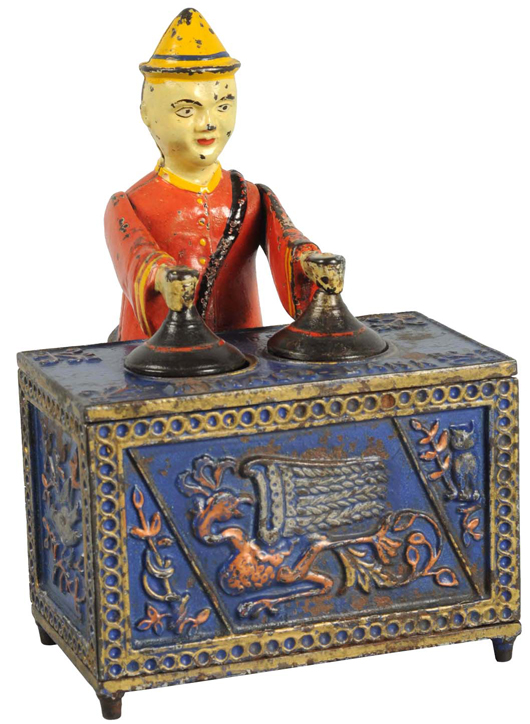 Matthews Auction to operate as division of Morphy’s, as of Jan. 1