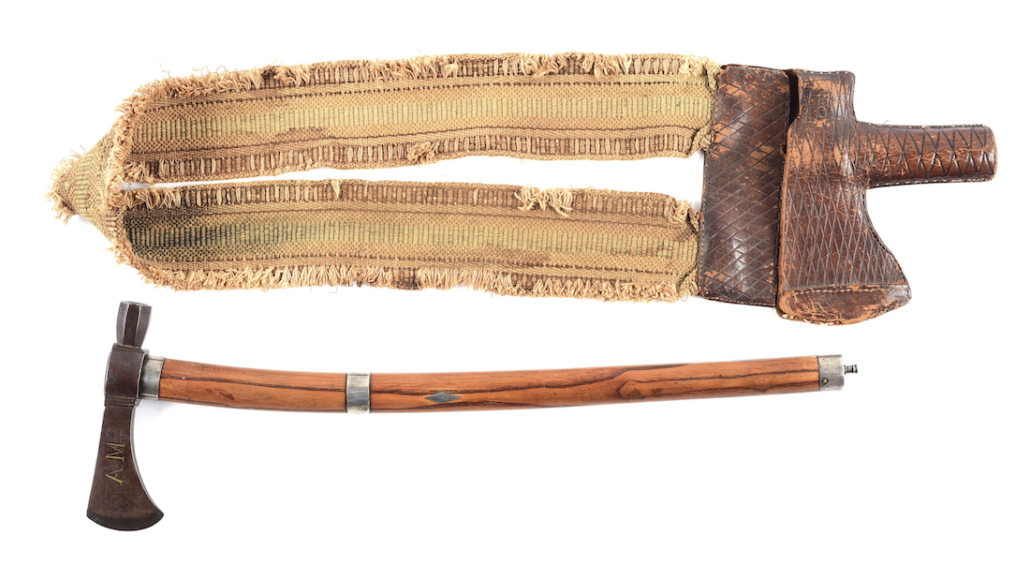 DENVER, Pa. – On Wednesday, September 29, Morphy’s will auction the revered Bill Myers collection of antique firearms, edged weapons and early militaria. The 163-lot boutique auction is devoted exclusively to Myers’ holdings, which were carefully acquired and scrupulously researched over several decades. Absentee and Internet live bidding will be facilitated by LiveAuctioneers.

“Bill Myers knew from childhood that he would be a collector. At the age of ten, he was gifted with a Civil War sword, musket and screw-tip powder horn. There was an immediate connection that developed into a lifelong fascination for antique firearms,” said Morphy Auctions Founder and President Dan Morphy.

After earning his college degree in structural engineering and serving in the armed forces, Myers set his focus on items from the 1750-1850 timeframe, when everything was painstakingly handcrafted. His acclaimed collection grew to include the finest examples of Kentucky rifles, Bowie knives, engraved powder horns and Indian presentation tomahawks.

“David Geiger, our expert who cataloged the collection, was awestruck by the rarity and incredible quality throughout. Bill is greatly respected by his peers in the antique firearms hobby, and we’re honored to present his incredible collection at auction,” Morphy said.

There are 31 antique rifles in the Myers collection, including several percussion and lever-action models, and 20 coveted flintlock types. Of the latter specialty, the top entry is a slender and finely carved 42-inch example attributed to John Rupp I of Lehigh Valley, Pennsylvania. A classic, streamlined longarm that exhibits all of the defining features of the Lehigh school of gunsmithing, it retains a silver hang tag confirming it was the Kentucky Rifle Association’s 1979 choice as “BEST INCISED CARVED RIFLE.” Joe Kindig Jr’s respected Thoughts on the Kentucky Rifle in Its Golden Age depicts a similar, Rupp-signed rifle with the same Indian- head/Liberty-cap-head engraving as is seen on the auction gun. Estimate: $75,000-$150,000

Another outstanding longarm with prestigious provenance is a circa-1780 Berks County, Pa., over/under Kentucky swivel breech rifle attributed to Nathan Boyer and originally owned by the Myer family. Centuries after its manufacture, it would become a prized asset in the collections of both George Murdock and, later, John du Mont. In du Mont’s notes on this rifle, he wrote that the legendary long rifle collector and author Joe Kindig Jr once described it as “the finest over/under swivel breech rifle [he] knew of.” Featured in multiple reference books, it is offered with supportive ephemera and is estimated at $40,000-$80,000. 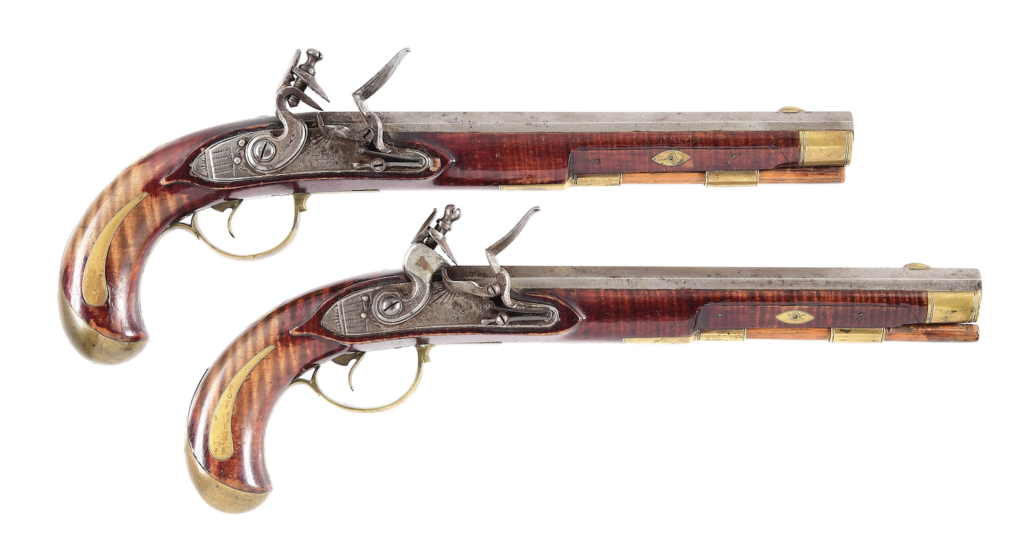 A wonderful pair of Lehigh County, Pa., antique flintlock Kentucky pistols built from tiger maple, with brass triggers and furniture, exhibits octagon barrels, punch-dot-decorated muzzle faces, and engraved front sights and banners. The duo is featured in James R. Johnston’s book Accouterments IV and retains the tag of noted author and authority Jim Dresslar. Showing little use and with every indication of having been very well cared for, the pistols are offered together with a $30,000-$50,000 estimate.

An extraordinary historical relic and the top-estimated lot in the sale is the circa-1780 inlaid pipe tomahawk (shown at top of page) that belonged to Sir Alexander Mackenzie (Scottish, 1764-1820), the first European to reach the Pacific Ocean [in 1793]. The tomahawk pipe has been featured in numerous prestigious reference books, as well as Mackenzie’s own journals, in which he specifically mentions the piece in an entry dated August 1793. In 1801, the journals of his westward odysseys were published, attracting widespread attention. One year later, Mackenzie was knighted for his achievements. It surely would have been a source of pride to Mackenzie that even President Thomas Jefferson presented an American edition of the book to Meriwether Lewis, who carried it with him on the Lewis & Clark Expedition in 1804. A first-edition copy of the Mackenzie book will convey to the pipe tomahawk’s new owner, along with other supportive ephemera and the NRA silver medal it won in the NRA’s “Ten Best Weapons” competition in 1984. The pre-sale estimate is $150,000-$500,000.

Some of the most remarkable edged weapons ever to pass through Morphy’s gallery are found in Bill Myers’ collection. A circa-1785 silver-mounted American scalping knife with a Federal Eagle motif measures 7½ inches long and is depicted in March to Massacre: A History of the First Seven Years of the United States Army by William H. Guthman. In that book, the author describes the fearsome weapon as a “white man’s scalping knife…that was made for a prosperous woodsman.” With provenance from Guthman’s personal collection, the lot is estimated at $15,000-$30,000.

A selection of 23 swords includes an important Revolutionary War-era production created by a Pennsylvania rifle-maker. Tiger maple gripped with an early “chicken-style” eagle-head pommel, it has a slightly curved blacksmith-forged blade that bears a star and the initials “PW” on the ricasso – a tantalizing clue that might connect the sword to well-known gunsmith Peter White of the Emmitsburg school of gunmakers. The sword passed down through many subsequent generations of the Armentrout family and was purchased by Bill Myers at a 2004 auction of the estate of Dr. C. Sherill Armentrout. It will cross the auction block at Morphy’s with an estimate of $10,000-$20,000. 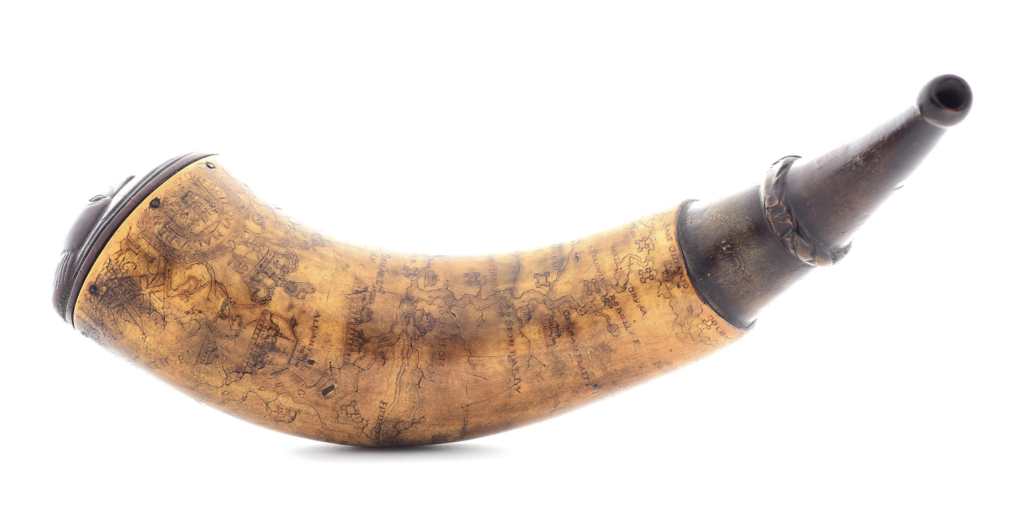 Artistically and historically significant powder horns hold pride of place in the Myers collection. More than two dozen are featured in the September 29 auction, including one that is profusely engraved in relief with a New York map showing significant cities, towns, rivers and forts of the French & Indian War period. Even its plug is appealingly decorated, with the engraved profile of an Indian wearing an earring. This powder horn has made multiple appearances in reference books and is well known to collectors. Its auction estimate is $40,000-$80,000.

Unique 1817 hand-painted wood sign from the ancestral stone residence of the Rupp family, Lehigh County, Pa. The homestead was the birthplace of seven generations of the famous Pennsylvania rifle-making family, including John Rupp. Book example. Estimate $10,000-$30,000

A final highlight not to be missed is a unique 1817 hand-painted wood sign from the ancestral stone residence of the Rupp family of Lehigh County, Pennsylvania. Demolished in 1967, the homestead was the birthplace of seven generations of the famous Pennsylvania rifle-making family, including John Rupp. A book example, it is estimated at $10,000-$30,000.