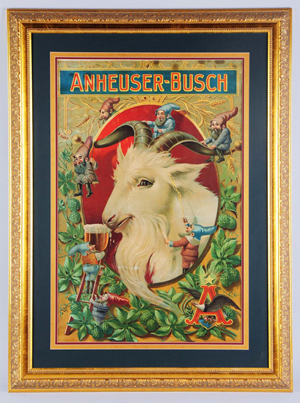 DENVER, Pa. – The convivial atmosphere of a century-old corner tavern welcomes visitors to Morphy’s southeastern Pennsylvania gallery in the run-up to the big Sept. 21-22 sale of Adolf Grenke’s breweriana and beer can collection. More than 40 years in the making, the approximately 4,000-piece Grenke collection will be sold in its entirety and without reserve over the course of the two-day event. Internet live bidding will be available through LiveAuctioneers.com.

At the core of the remarkable single-owner collection – which also includes 400 beer taps and a selection of advertising signs, artwork and promotional items – are some 500 antique and vintage beer cans, many of which are exceedingly rare. “A few key examples are expected to exceed $50,000 each,” said Morphy Auctions CEO Dan Morphy.

A former plastics industry executive and president of an elevator company, Grenke became aware of beer cans as a collectible in 1972 after his wife took their two young sons to an educational lecture sponsored by the parks department in his suburban Chicago neighborhood.

“The fellow making the presentation was a Meister Brau salesman. He was there to encourage kids to collect beer cans and even handed out sample cans,” Grenke recalled. But it wasn’t until later, while on a family vacation in Texas, that Grenke himself caught the collecting bug.

“We were on our way to the Alamo when one of my sons spotted beer cans on the side of the road near a golf course. I was all dressed up, but we pulled over, and soon I was in the mud pulling up beer cans right along with my sons,” Grenke said with a laugh.

After a few years of collecting and watching the prices escalate on vintage cans, Grenke joined the BCCA and Worldwide Beer Can Collectors, which he knew would open doors to a much wider network of collectors through club meetings and conventions. He became known as a serious buyer who would pay the price to own the rarest cans, but ironically, he only rarely drank beer.

Grenke’s collection includes many cans chosen for inclusion in top reference books because they were the best of all known examples. “Adolf was always a condition collector,” Morphy said. “Whenever a new book on beer cans was in the works, invariably the author and photographer would end up at Adolf’s home.”

Grenke’s favorite cans include a rare Apache Export can from Arizona – a very desirable low-profile cone-top can with Native American imagery. It is one of only five or six known and is expected to make $25,000-$35,000 at auction. Grenke also favors an olive drab Peter Hand Meister Brau can that is the only known example of its type. “During World War II, Meister Brau sent their beer overseas to US soldiers,” Grenke said. “As far as anyone knows, this is the sole survivor.” It is estimated at $12,000-$18,000.

Morphy’s enlisted the services of noted breweriana expert Dan Morean of www.breweriana.com to appraise and catalog the beer can portion of the sale. Morean, who has bought and sold some of the most important beer can collections of the past few years, said the Grenke collection is “the first major beer can collection to be auctioned other than on eBay – and not that many major ones have hit eBay, either.”

The Grenke collection includes spectacular 19th and early 20th-century signs, like the gold-framed 1886 Bock Beer Maid lithograph with two actual checks from the brewery, est. $15,000-$25,000; and an Anheuser-Busch Bock Beer elves and ram lithograph, possibly the only extant example, estimated at $25,000-$45,000.

A corner sign from Buffalo’s Iroquois Brewery is conservatively estimated at $20,000-$40,000. “The last one that appeared at auction was made of composition and sold for $55,000. This sign, which is made of porcelain, is expected to fly,” said Morphy.

A special attraction within the antique advertising section is the 40+ illuminating reverse-on-glass, porcelain-enameled signs made by Gillco, Philadelphia. Gillco signs are coveted by breweriana collectors because of their outstanding quality and the fact that manufacturing runs were so low – sometimes limited to only 10 to 25 signs per design. “Some signs were even one of a kind,” Grenke said.

The top-estimated Gillco sign in the auction advertises Tally-Ho Beer and is twice the normal size of signs this company manufactured. Its image is of a horse-drawn Tally-Ho coach with well-dressed, top-hatted passengers. “It previously belonged to a beer can collector in California who has since passed away. No one I know has ever seen this sign before. It might be a prototype,” Grenke said. The sign is estimated at $8,000-$12,000.

Other Gillco signs advertise Tannenbaum Beer, Old Town Lager, Lowenbrau Munchen, Atlas Prager Beer, Pabst Blue Ribbon and Trommer’s White Label Malt and other brands. Approximately one dozen are light-up “bullet” signs with beer bottles on the front. Yet another, which features an image of three horses jumping a fence, may well have been a salesman’s sample, as no particular product is shown on it.

An excellent assortment of beer tap knobs will be offered, as well as a selection of trays, knobs and “smalls,” including promotional buttons, watch fobs, match safes and pocketknives. Breweriana expert Les Jones, who cataloged the items, explained that the smalls were company giveaways or given to customers at bars, while others might have been employee items or mail-in premiums.

Also included in the collection is arguably the finest known assemblage of pre-Prohibition beer glasses from breweries in Chicago and other Illinois cities. Each of the 200 glasses had the name of a brewery or type of beer acid-etched onto its thin, fine glass, so relatively few survived over time, Jones said. A grouping of pre-Prohibition brewery or beer-branded steins will also be sold.

Dan Morphy remarked: “This collection is absolutely intact and unpicked, and everything is a condition 9, 9½ or better. Everyone who has come in to the gallery and viewed the collection has commented on how ‘clean’ everything is. That’s what really sets this collection apart from anything else out there.”

Both sessions of Morphy Auctions’ Sept. 21-22, 2012 auction of the Adolf Grenke Breweriana and Beer Can Collection will commence at 9 a.m. Eastern Time. Internet live bidding will be available through LiveAuctioneers.com. For information on any item in the sale, call Serena Myers at 717-335-3435 or e-mail serena@morphyauctions.com. 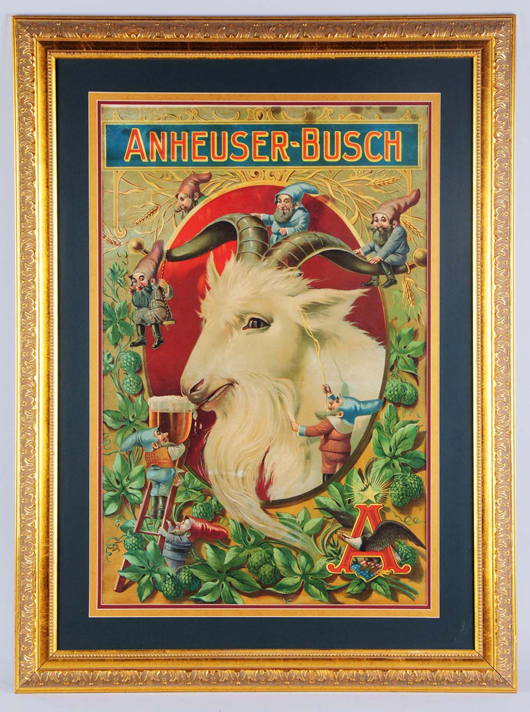