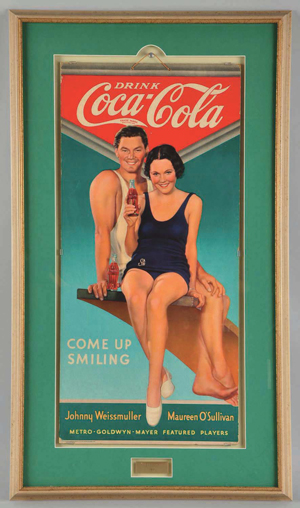 DENVER, Pa. – Over the weekend of April 29-30, 2011, Morphy Auctions will present a colorful array of fresh to the market antique toys, banks, advertising and figural cast-iron novelties in a 1,645-lot auction titled A Spring Selection. Both the Friday and Saturday sessions include extremely rare items from long-held collections, with highlights including early Dr Pepper advertising items, 19th-century occupational shaving mugs, and a historically important circa-1928 Hubley cast-iron bulldog lawn ornament believed to be a lone survivor. Internet live bidding will be provided by LiveAuctioneers.com.

The star of the figural cast iron section is an imposing, life-size English bulldog garden ornament made by Hubley around 1928. Patterned after a bulldog that belonged to Hubley’s corporate treasurer, two sample dogs were produced from a plaster-of-Paris prototype, Morphy’s example being one of them. When Wall Street crashed in 1929, Hubley scrapped plans to manufacture the expensive design. One of the sample dogs was broken down and melted for the war effort in the 1930s; the other remained in Pennsylvania and passed through several collectors’ hands before arriving at Morphy’s. It will be auctioned with a $20,000-$25,000 estimate.

A fine representation of cast-iron bottle openers, doorstops and other figural novelties will be offered. Top doorstop entries include a Salem Witch, $1,200-$1,500; and the only known Yellow Duck, as depicted in John C. and Nancy M. Smith’s The Doorstop Book, $3,500-$4,500. The only extant example of a cast-iron Monkey lawn sprinkler, estimate $2,000-$2,500, was found in New England and is in near-mint condition. Other prized pieces in the category include two bottle openers – a cast-iron wall-mount Skull, and a Golf Caddy, each estimated at $400-$500.

The Friday session takes on a whimsical feel with a collection of glass and papier-mache candy containers. Highlights include a Toonerville Trolley, $600-$900; Baseball Player with Bat, $600-$900; and Barney Google, $500-$700.

Saturday’s fun will commence with 125+ occupational shaving mugs from an outstanding 50-year collection. “This is the best selection we’ve had yet,” said Morphy’s CEO Dan Morphy. “Because we’ve auctioned a couple of other major collections and achieved incredible prices, I was concerned that the market might be getting saturated, but that has not been the case at all. New collectors are coming in, and existing collectors are stepping up their buying.” Among the mugs to be auctioned at Morphy’s are examples with images of a boxer, man in kayak, and man driving a metal delivery truck, each $2,000-$3,000; and baseball player and bowler, each $2,000-$4,000.

A single-owner collection of pin-up calendars spans the decades of the 1930s through 1950s. Morphy described the contents as being “in beautiful, untouched condition.”

Dr Pepper is America’s oldest major manufacturer of soft drink concentrates and syrups, and early memorabilia associated with the Texas company is highly sought after. A single-owner collection of early Dr Pepper advertising will be offered in 100 lots. Brimming with eye appeal, an extremely rare oval serving tray with a classic lion image is estimated at $6,000-$9,000. Another beautiful design is the rare Dr Pepper leaded-glass desk lamp, $4,000-$8,000. A 1920s cardboard poster carries a $5,000-$7,000 estimate, and a very scarce 1929 calendar is expected to finish in the $2,000-$4,000 range.

Perhaps the most unusual entry in the sale is the 1920s folk art carnival target made of leather and shaped as a donkey. “It came from Lebanon, Pennsylvania,” said Morphy. “We have period photos of it at a fair, with Model Ts parked in the background. Amazingly, it still works. It hee-haws and kicks its leg around, and its eyes light up when the target is hit.” Estimate $4,000-$6,000. 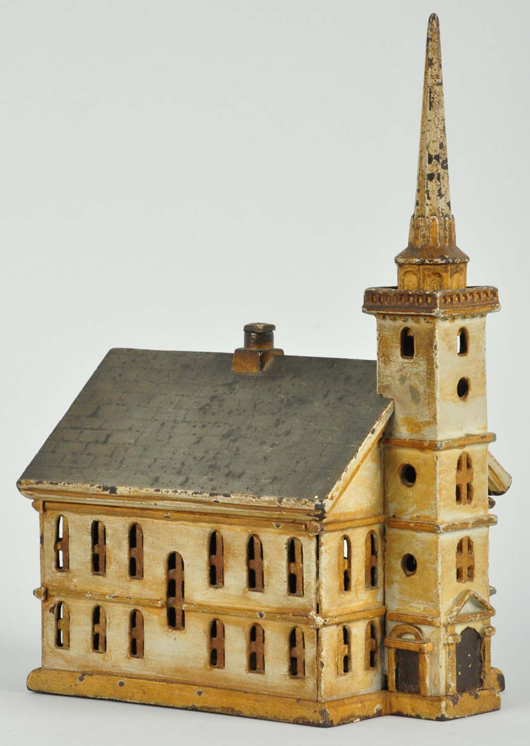 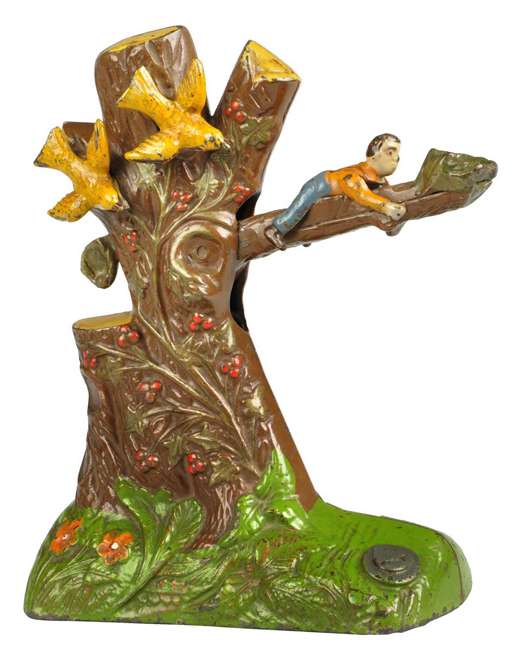 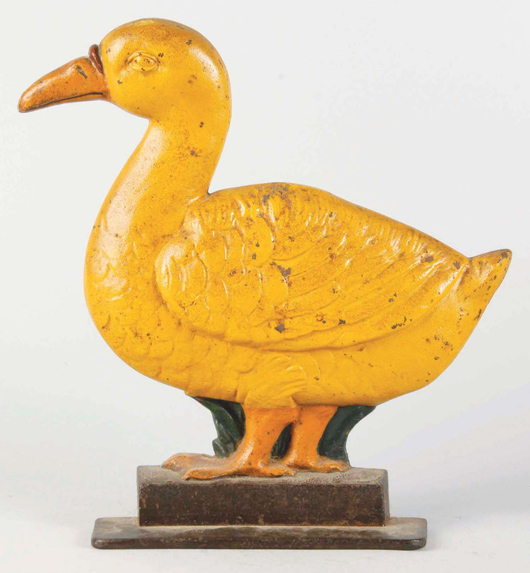 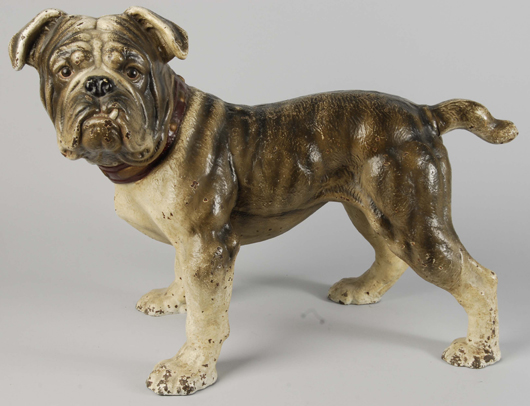 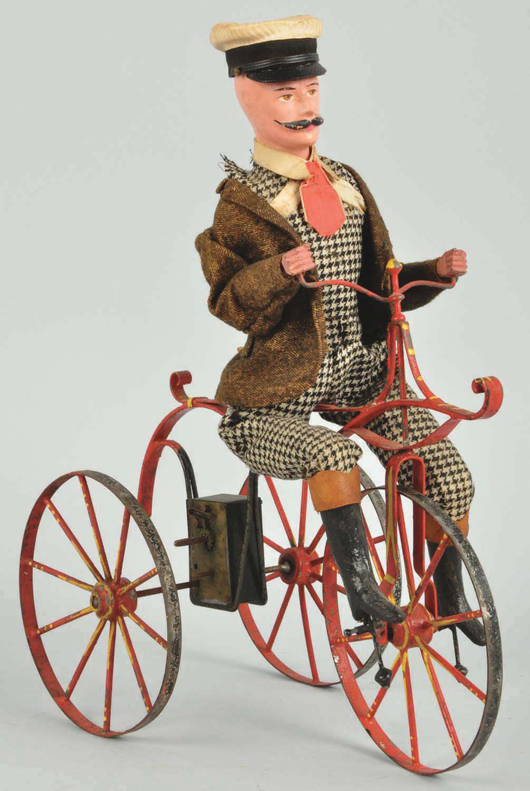 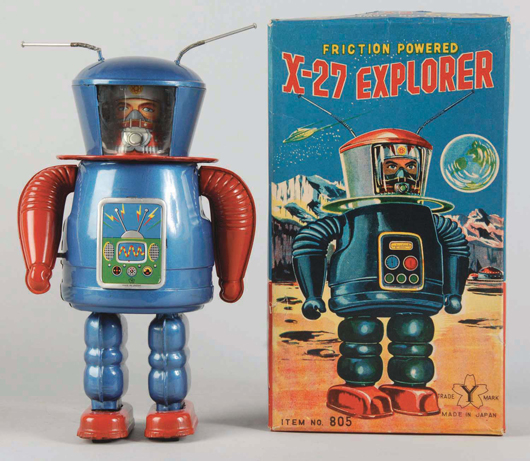 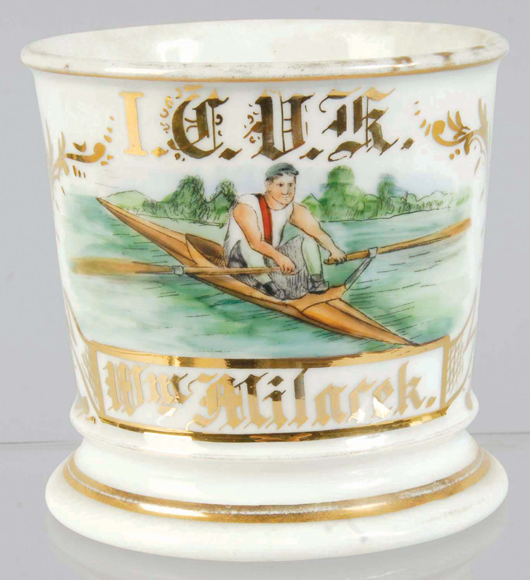 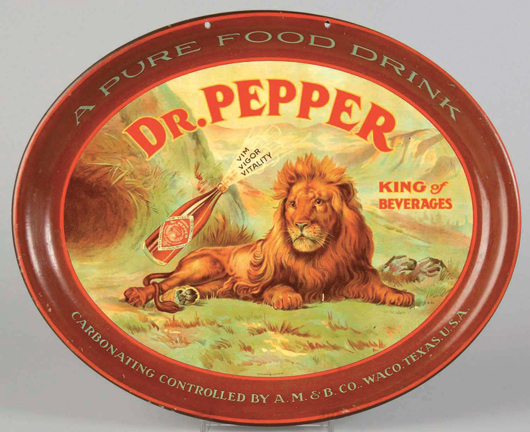