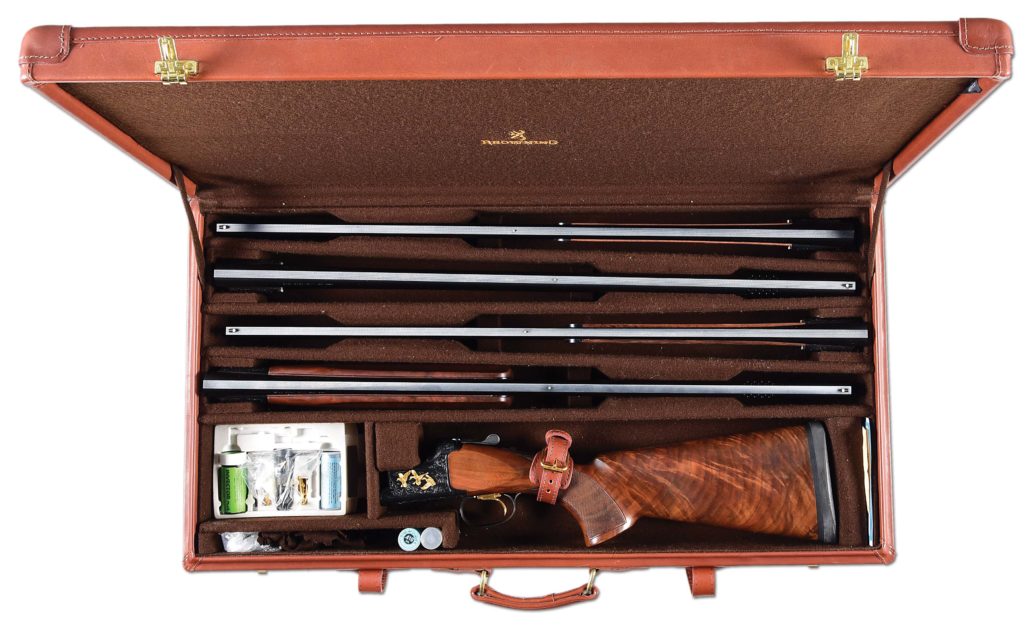 DENVER, Pa. – No matter how impressive a collector’s gun display may be, there’s always room for one more high-quality firearm if it’s on par with those being offered at Morphy’s August 11-13 Field & Range Firearms Auction. Over the span of three days, more than 2,100 arms will be presented, including 275 antique rifles, 704 modern rifles, 41 antique shotguns, 231 modern shotguns, 252 antique handguns, 510 modern handguns, and 25 sought-after NFA items (BATF approval required prior to transfer), plus three cannons, scopes, accessories and ammunition. In addition to in-person bidding at the gallery, Morphy’s welcomes absentee and Internet live bidding through LiveAuctioneers.

In cataloging each of their firearms sales, Morphy’s team of experts goes the extra mile to provide honest, authoritative descriptions and as much background as possible about the guns. “Whether they’re Colts that were trusted sidearms of Western settlers or weapons of war, every gun has a story. Within our catalog descriptions, we include those stories and historical details, which are important to collectors who bid in our sales,” said Dan Morphy, founder and president of Morphy Auctions.

There are many desirable entries in the 19th-century American gun selection, starting with an engraved Colt single-action .45-caliber Army Revolver (shown above) made in 1874, the model’s second year of production. It has a single-line address on top of the barrel, a two-line patent date, and the full serial number on several of the gun’s components. This handsome witness to America’s Reconstruction Era comes to auction with a $5,000-$7,000 estimate. 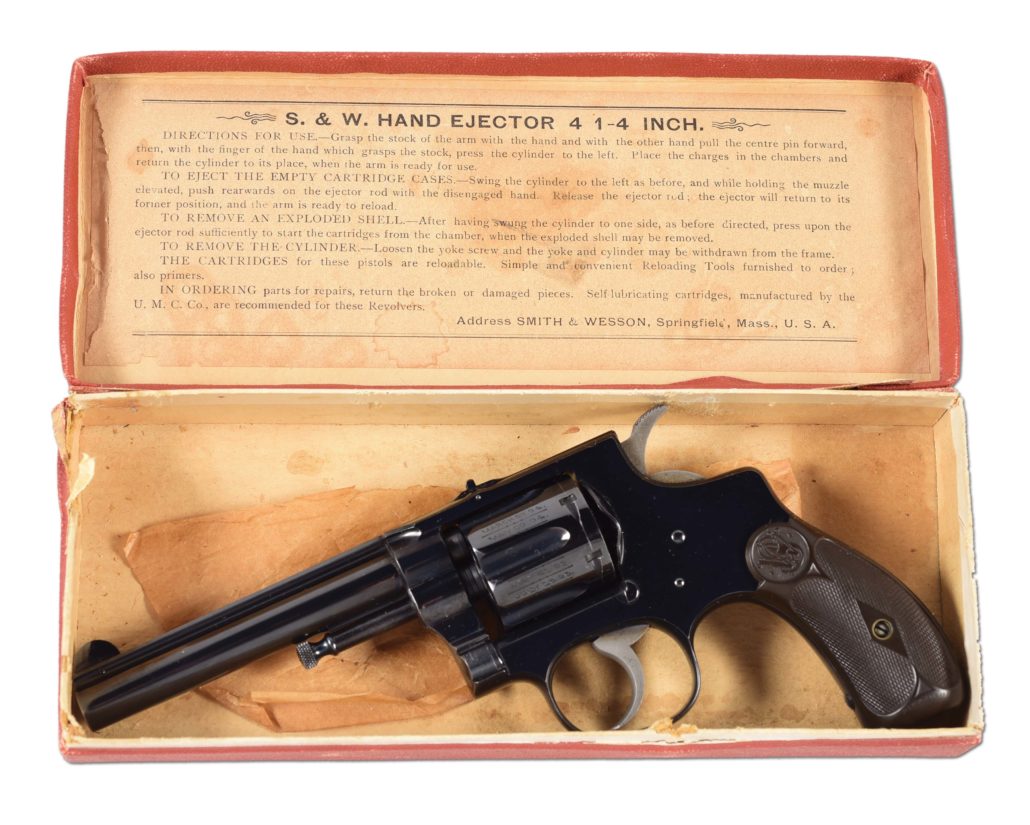 Those who seek ultimate condition in an antique gun need look no farther than the finest known example of a factory-boxed .32-caliber Smith & Wesson 1st Model hand-ejector double-action revolver with a swing-out cylinder system. This feature was introduced by the manufacturer in 1896 and remained in production through 1903. With matching numbers and no indication of its ever having been fired, the gun is graded “extremely fine to new.” Estimate: $1,000-$1,500 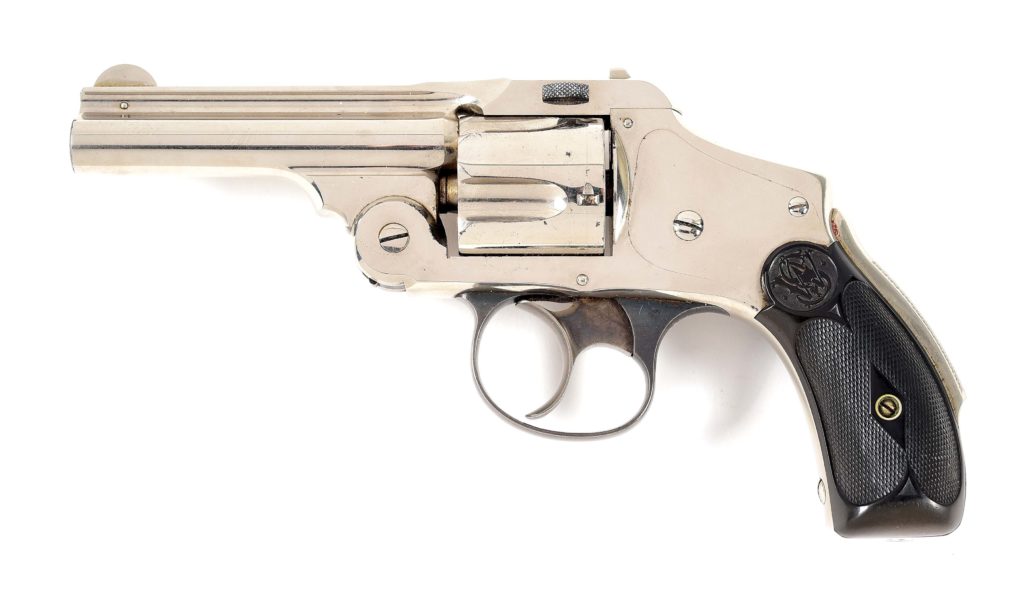 Another notable antique is a rare Smith & Wesson 1st Model .38-caliber safety hammerless revolver of a type produced only in 1887. Appropriately, it is serial-numbered ’87. The five-shot gun has a unique Z-Bar opening and closure latch that was integrated into the design of only the first 5,250 S&W manufactured. In extremely fine condition with evidence of test firing only, it is estimated at $1,000-$1,250. 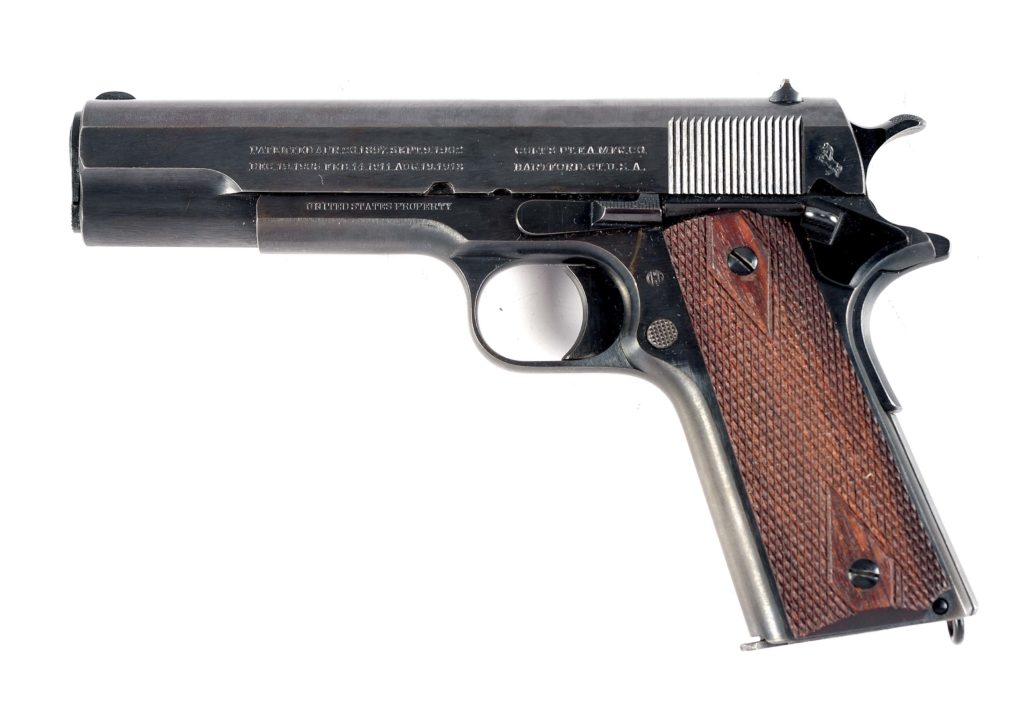 An exceptional World War I US Colt Model 1911 semi-automatic pistol retains a prime pair of original Colt Diamond-pattern Type 1 walnut grips. It is marked on the left side of the slide “MODEL OF 1911 U.S. ARMY” and is additionally marked to indicate it was US-martially inspected. The frame reads: “UNITED STATES PROPERTY” AND “No 163970.” The gun’s action works properly and it is graded VF with an Excellent bore. This beautiful example of a century-old Colt is estimated at $3,000-$4,000.

A special order .32-caliber Winchester 1894 Deluxe Carbine was built on July 15, 1904, as confirmed in the accompanying document from Cody Firearms Records. Its history also includes having been received and repaired at the Winchester factory in 1917, then returned to its owner. Morphy’s catalog description notes: “The repair performed in 1917 explains the offset Winchester proof currently found on the breech of the barrel and on the receiver.” Solidly documented, in excellent condition, and exhibiting tight, crisp action, the scarce firearm is expected sell for $4,000-$6,000.

Many desirable shotguns will cross the auction block, including a Winchester Model 21 16-gauge side-by-side made in 1936. Its blued receiver is marked “SKEET” with a Winchester single selective trigger, ejectors and non-automatic safety. It has good bores and mechanics and is estimated at $4,500-$7,500.

Another skeet set (shown at top of page) consists of a discontinued Browning Citori Grade VII shotgun with four barrels: 410, 28, 20 and 12 bore. All barrels have vent ribs with a white center bead and a white bead sight. They also come with three Invector choke tubes per barrel set. The gun is gold-inlaid with scenes of flaring ducks (left panel), a German shorthair pointer dog (bottom panel), and two pheasants and a hunting dog (right panel). The fitted case is included. Estimate $4,000-$6,000

Bearing all the earmarkings of superior German gun craftsmanship, a Blaser over/under shotgun/rifle B95 combination gun has two barrel sets, the first being a 16 gauge over 5.6×50. Both barrels have German nitro proofs and breeches with caliber designation. There is also a Munich proofmark. The bottom of the rifle barrel is import-marked for Foxtrot Lima Enterprises, Skaneateles, N.Y. The gun comes with two Zeiss Diavari-Z scopes and a fitted case. Estimate $5,000-$8,000

Commenting on the auction inventory’s broad variety, Dan Morphy observed: “Our Field & Range Firearms sales always include a huge selection, which means there’s something of interest to beginners as well as intermediate and advanced collectors. Whether it’s a modern shotgun or a historical musket, every gun we offer for sale is carefully vetted for quality and originality. Collectors know they can trust our experts and bid with confidence.” 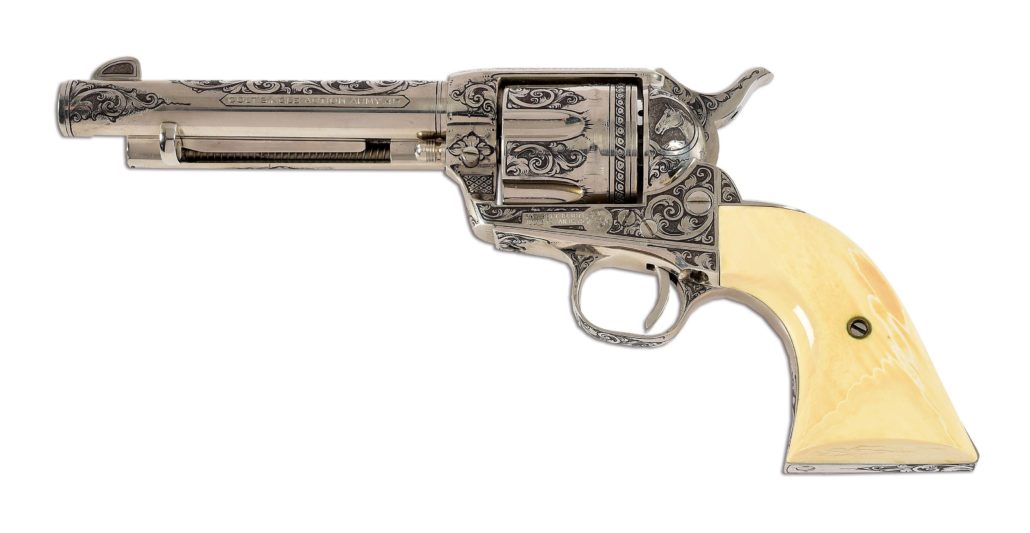 Morphy’s August 11-13, 2020 Field & Range Firearms Auction will be held at the company’s Denver, Pennsylvania gallery, starting each day at 10 a.m. Bid absentee or live via the Internet through LiveAuctioneers. Questions: call 877-968-8880 or email info@morphyauctions.com.