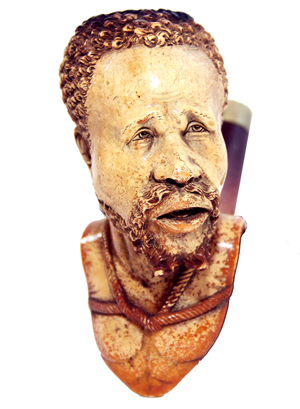 FREDERICK, Md. – America’s enduring fascination with the War Between the States is never more evident than in our nation’s auction rooms. Authentic Civil War clothing, artifacts and memorabilia of the type to be offered at Mosby & Co.’s Nov. 11-12 sale is consistently in demand with collectors, said the firm’s owner, Keith Spurgeon.

“In particular, buyers are seeking out items that come from long-established collections with deep provenance. That’s exactly what we’ll be auctioning in November – a collection from Texas that was started when the consignor, who is now in his seventies, was only nine years old,” said Spurgeon. All Civil War auction items were vetted and cataloged by Brian Akins, a renowned specialist dealer who produces Civil War collector shows.

In all, more than 920 lots will be presented over the auction weekend, with Internet live bidding through LiveAuctioneers.com. Approximately 400 Civil War lots comprise the entire Friday session. Roughly 99% of the militaria comes from the Texas consignment, with pieces representing both Confederate and Union armies. Basic categories include uniforms, hats, weapons, swords, flags, corps badges and saddles. Additionally, there are relics recovered from battlefields, buttons and soldiers’ miscellaneous personal effects.

In terms of volume, the strongest part of the sale is the swords, with more than 40 fine-quality examples entered. Highlights include several eagle-head swords from both the Union Army and pre-Civil War eras.

Several rare and desirable Union jackets will be auctioned, with examples dating to periods before, during and after the Civil War. Other top clothing lots include a United Confederate Veterans general’s frock coat and a Confederate battle shirt from the 24th Louisiana Crescent Regiment. The latter item comes with provenance from the collection of the late artist, author and historian Randy Steffan. Another special inclusion is a complete 1860s lady’s lace over silk mourning outfit described in the auction catalog as being in “spectacular” condition.

More than 20 lots of corps badges will be offered, including two with period engraving that directly links them to specific soldiers. “It’s tough to find identified corps badges, so those two, in particular, should do very well,” said Spurgeon.

Flags include a Confederate ceremonial flag from a major, and a 34-star Civil War Union flag in superb condition. It measures an impressive 10 ft. by 6 ft.

Among the other notable lots are four saddles, including a Grimsley and a McLellan-design of the Civil War period; and an 1861 cavalry recruiting broadside illustrated with a man on a rearing horse. The firearms section is led by an original Spiller & Burr Confederate frame, serial #10 – one of probably three known surviving examples. Also to be auctioned are an 1844 Waters pistol with a Fayetteville conversion, in outstanding condition; and a battlefield pick-up of a bullet-struck gun. Other battlefield relics include numerous gun barrels, bridle bits, buttons, knives, a cannon barrel and soldiers’ personal articles.

The Saturday session will be brimming with colorful antique toys, country story and advertising pieces; Americana, black memorabilia, and an array of posters that includes circus and sideshow types.

Seldom-seen toys await bidders at Mosby’s, including a circa-1870 Ives Carrie clockwork rowboat and oarsman figure with exceptional original paint. Another true rarity is the 1934-35 Tippco airplane with swastikas on the tail and Mickey Mouse lithographed on both sides of the nosecone. “This is only the second one of its type that I’ve seen in 25 years as a toy dealer and collector,” Spurgeon said.

Everyone’s favorite cartoon sailor will make his presence known in the form of a Popeye Rowboat and a Popeye eccentric airplane with original flag – the latter being the example depicted in Robert Lesser’s 1975 book A Celebration of Comic Art and Memorabilia. Both Popeye toys retain their correct original boxes. Other standouts within the panoramic toy section include a mint/boxed “Santee Claus” and a 1914 tinplate clockwork ambulance sweets tin.

The roster of Black and American historical memorabilia starts with slave-related articles, such as shackles, manillas (bronze bracelets used in the slave trade), slave documents including bills of sale, and freedmen’s passes. KKK articles to be auctioned include a Klansman’s uniform.

A stand-alone auction highlight is the very rare 1918 floor-model phonograph lamp manufactured by Electric Phonograph Co. “When these phonographs turn up, they’re almost always tabletop models,” Spurgeon said. “I have not been able to locate a floor model like the one in our sale in any antiques book. It is 100 percent correct and comes from a 50-year collection in California.”

Mosby & Co. is known for its expertise in the field of circus and sideshow posters. Spurgeon noted that sideshow posters, in particular, are very difficult to locate but said he was able to secure several very desirable examples for his sale: Ubangi Savages, Giraffe-Neck Women from Burma, a German-printed Museum of Oddities poster with “Tiger-Skin Women,” and others.

The widely varied poster selection spans the period from 1900 through the 1970s and documents many forms of entertainment, from minstrel shows and vaudeville to magic shows. An additional magic highlight is an inscribed1912 presentation photo of Harry Houdini, and a signed Houdini letter on Society of American Magicians letterhead from the period during which the legendary illusionist was its president.

Other poster highlights include a beautiful 1906 “Montana Frank” poster in Wild West Show style, a 1926 window card for the Lillian Gish silent film The Scarlet Letter, and a poster for the cowboy silent film King of the Saddle, with Bill Cody. 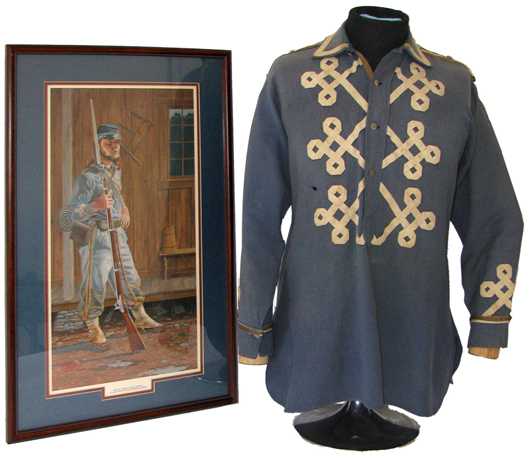 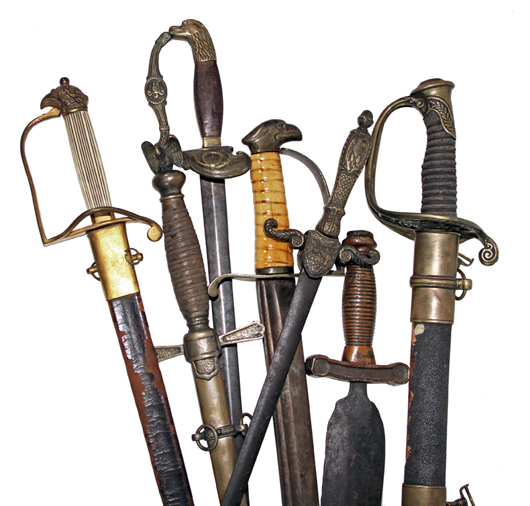 Examples from a selection of more than 40 swords. Mosby & Co. image. 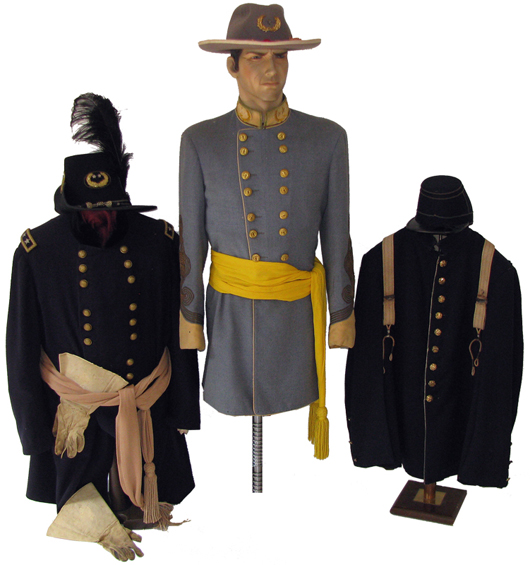 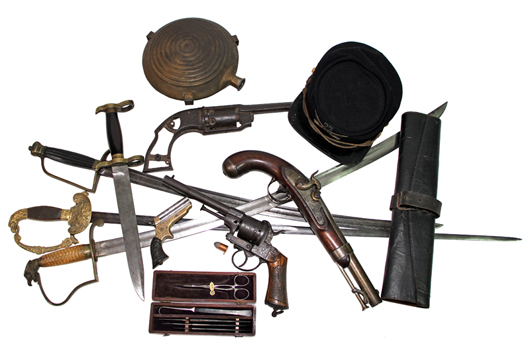 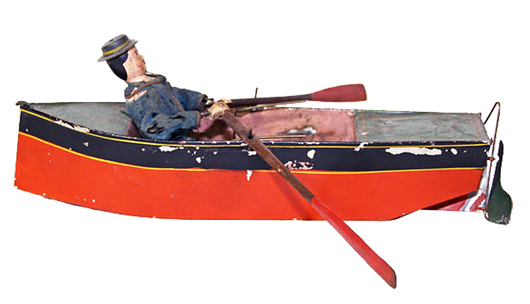 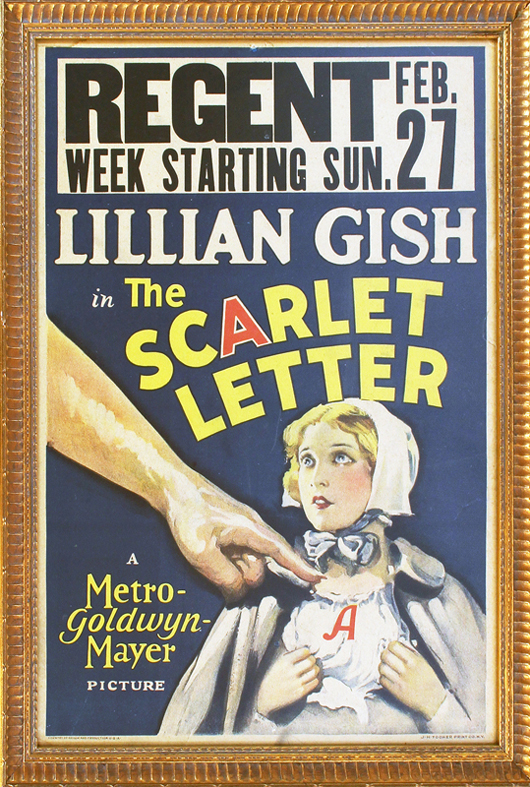 Window card from the silent film ‘The Scarlet Letter,’ with depiction of its star, Lillian Gish. Mosby & Co. image. 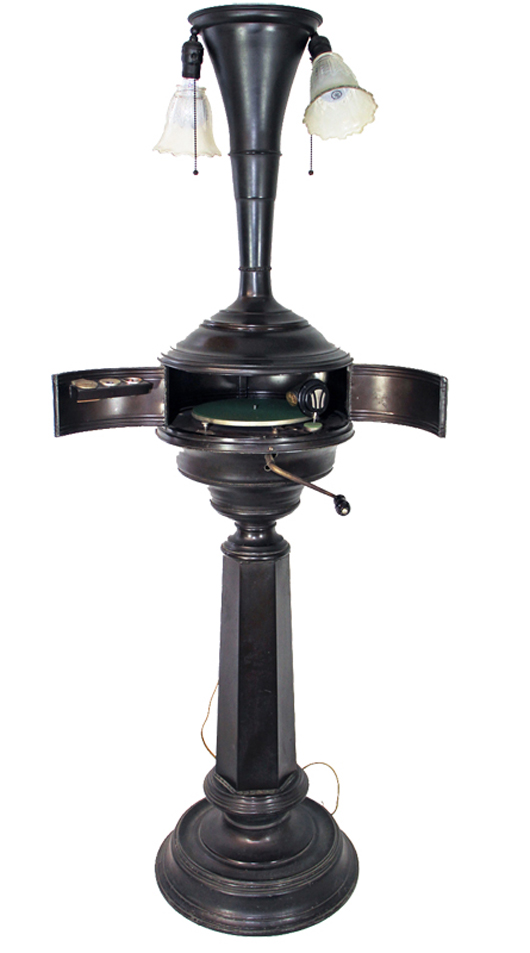 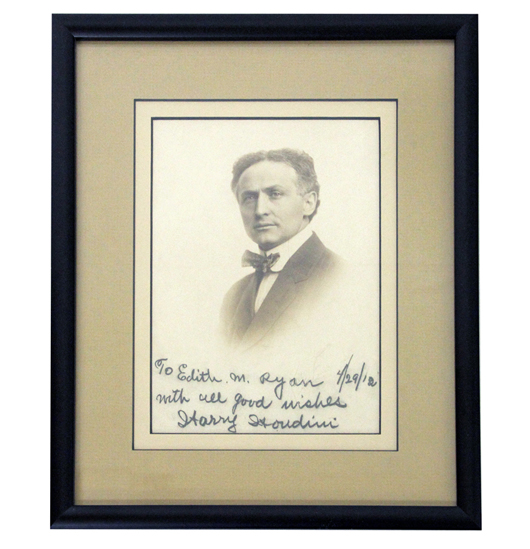