The foremost carpet in the sale is this palace-size 17th-century Indo-Persian with elegantly drawn compartments around the perimeter. In a rich array of colors with silk-wrapped selvedge, it is projected to bring $40,000 to $80,000. Image courtesy Brunk Auctions.

ASHEVILLE, N.C. – Instead of “cutting to the chase,” Brunk Auctions’ September 12-13 sale is expected to begin with a chase. Lots 1 through 34 are rare Oriental carpets deaccessioned from North Carolina’s famous Tryon Palace after 30 years in storage. They have generated enormous interest among antique rug collectors and within the textile trade. There’s sure to be aggressive competition for these fresh-to-the-market rarities. Internet live bidding will be provided by LiveAuctioneers.com.

Purchased in the 1950s and ’60s from textile experts such as Vojtech Blau, French & Company, and others of equal reputation, many of the carpets were installed in the reconstructed North Carolina Capitol building when it opened in 1959. They were removed from exhibition after it was learned that no carpets of any type were part of Tryon Palace’s 18th-century décor. The 34 carpets, some dating from the 16th and 17th centuries, have been in storage ever since.

The Hickory Museum of Art is the second-oldest art museum in North Carolina. Its focus is 19th- and 20th-century art. Since 2000, the museum has deaccessioned many of its European and Asian holdings to focus the collection on American art. The 112 objects in this sale – British, German, Italian, Mexican, French and Spanish paintings and Asian art and ceramics – represent a continuation of that effort.

Among the 16 portraits consigned by the Hickory Museum, two by Sir Thomas Lawrence (British, 1769-1830) are clear standouts. The auction history for the 1811 portrait of Mrs. Thomas Babington includes a 1901 sale at Christie’s and a 1973 sale at Parke-Bernet, Los Angeles. On verso is an inscription giving information of the portrait’s date, subject and artist. The oil on canvas portrait measures 30-1/8″ by 25-3/8″ and is in a Maratta frame favored by Lawrence. The measurements for the oil on canvas half-portrait of James Hamilton, Marquess of Abercorn, are nearly identical to Mrs. Babington (30-1/8″ by 25″). Each portrait is estimated at $20,000 to $30,000.

Although the Hamilton portrait is unsigned, there is photograph of it in London’s National Portrait Gallery and it is mentioned in the complete catalog of Lawrence’s work. Brunk Auctions Fine Art Specialist Laura Crockett compared the crackle pattern of the Hickory Museum portrait with the London photo and they matched. “It was a neat find,” said Crockett.

Founded in 1965, the Museum of Early Southern Decorative Arts (MESDA) features architecture, furniture, ceramics, metalwork, needlework, paintings, prints and other decorative arts made and used by the early settlers of Maryland, Virginia, the Carolinas, Georgia, Kentucky and Tennessee. Among the 167 articles consigned are domestic tools such as a yarn reel, flax breaker and bobbin winder. Most of what MESDA consigned is Southern furniture.

Possibly the most unusual MESDA furniture lot is a circa 1770 Virginia Chippendale spice chest. Its figured walnut door opens to reveal 10 interior drawers, five of which extend the entire width of the chest (17¼ inches). The skirt and bracket feet are original; hinges and locks are replaced. Its pre-sale estimate is $4,000-$6,000.

From Piedmont, N.C., MESDA consigned a 1760-1780 yellow pine Chippendale chest of drawers with eight graduated drawers. Sides are single boards; its dovetailed bracket feet are original. There are traces of early red and black paint throughout. Like the spice chest, its estimate is $4,000-$6,000.

For more information on the Sept. 12-13 sale, call 828-254-6846. View the fully illustrated catalog and sign up to bid absentee or live via the Internet through www.LiveAuctioneers.com. 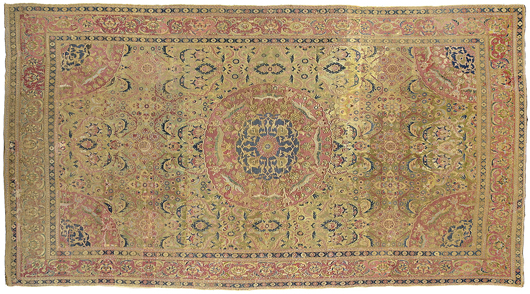 Estimated at $30,000 – $60,000 is this 17th-century Ottoman-style carpet with a blue, red and gold central medallion. The corners contain a quarter arc with the central medallion design repeated, a 17th-century Persian design element. Other features, notably the use of red and green, suggest a strong Egyptian influence. Image courtesy Brunk Auctions. 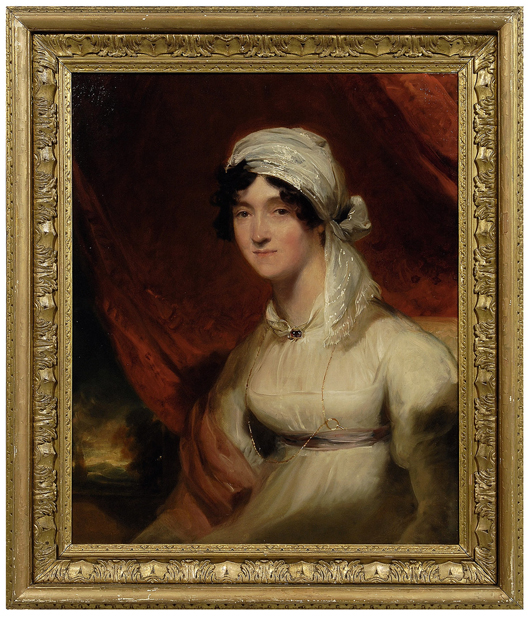 Accompanying this circa 1811 portrait of Jean Babington is an appraisal from Newhouse Galleries, dated December 22, 1982. Mrs. Babington is arrayed in a white empire gown with her hair wrapped in a scarf. Her Thomas Lawrence portrait is expected to sell for between $20,000 and $30,000. Image courtesy Brunk Auctions. 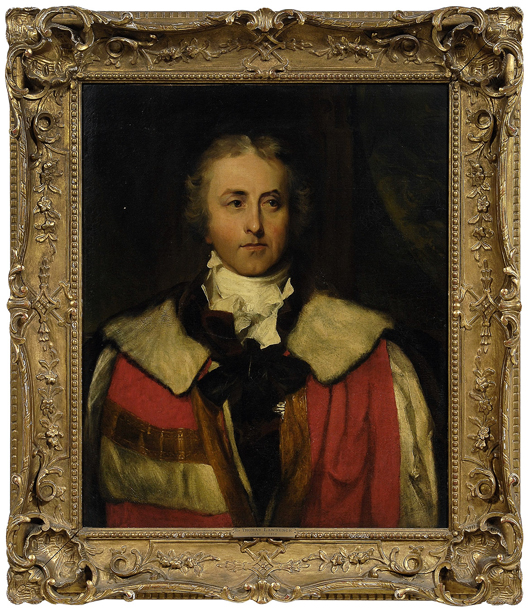 Unsigned, but attributed to Sir Thomas Lawrence (British, 1769-1830) is this half-portrait of James Hamilton, Marquess of Abercorn, in his earl’s robes. The frame is early 20th century carved and gilt wood. Consigned by the Hickory Museum of Art, the oil on canvas is expected to bring $20,000 to $30,000. Image courtesy Brunk Auctions. 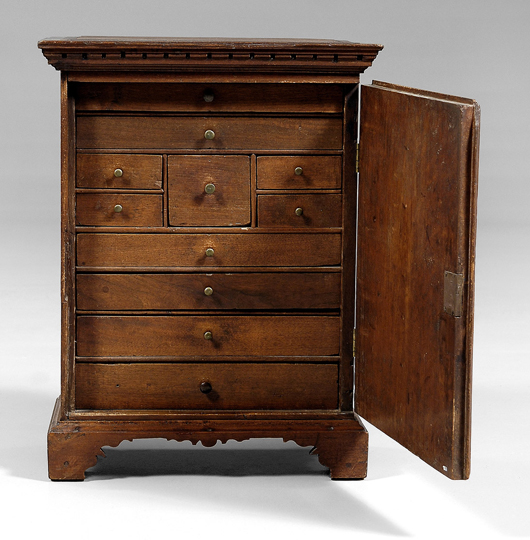 This circa-1770 Chippendale spice chest in walnut with poplar secondary was originally purchased in Petersburg, Virginia. The 23¾ inch by 17¼ inch by 9½ inch chest is estimated to bring $4,000 to $6,000. Image courtesy Brunk Auctions. 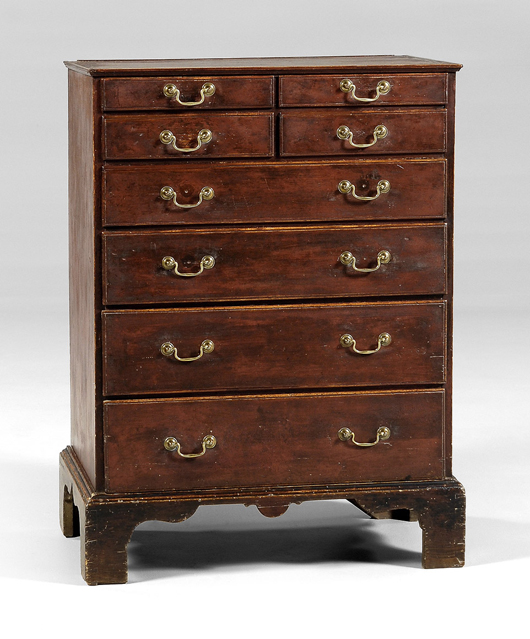 There is no secondary wood on this all-pine, finely constructed North Carolina Chippendale chest of drawers. Attributed to the Piedmont area of the state from 1760-1780, the 42 inch by 32 inch by 19½ inch chest should bring between $4,000 and $6,000. Image courtesy Brunk Auctions.