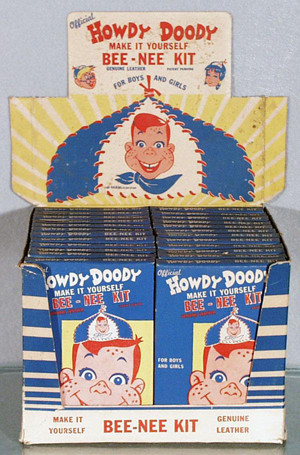 The Howdy Doody Bee-Nee Kit counter display contains 24 kits to craft leather beanies. all of which are unopened. The display and unopened contents have an $800-$1,200 estimate. Image courtesy of Lloyd Ralston Gallery.

SHELTON, Conn. – Toys and toy soldiers from Neil Sakow’s American Dream Museum, which was located in West Hartford, will be auctioned at Lloyd Ralston Gallery on Saturday, Aug. 14. The 457-lot auction will begin at 10 a.m. Eastern. LiveAuctioneers will provide Internet live bidding.

Sixty-one lots are related to one of Sakow’s favorite childhood memories, Howdy Doody. Items range from a Hoody Doody beanie kit store display with unopened contents to a 15-inch marionette of the early children’s TV star.

Approximately 300 lots are devoted to Britains’ soldiers and figures, more than 250 of which are in original boxes.

The collection also contains character toys and advertising items. Also included are vintage and modern toy figures and soldiers by Britains, including more than 250 boxed sets. Heyde, Mignot and dimestore soldiers will also be sold.

Leading the Britains charge is a boxed 39 Horse Artillery set estimated at $300-$400. Multiple bids have already been placed online for the Britains 440 The Royal Fusiliers with rare display box. The set has a $400-$500 estimate. A Britains 1448 Army Staff Car with officer and driver in its original box, estimated at $200-$300, has multiple presale bids. 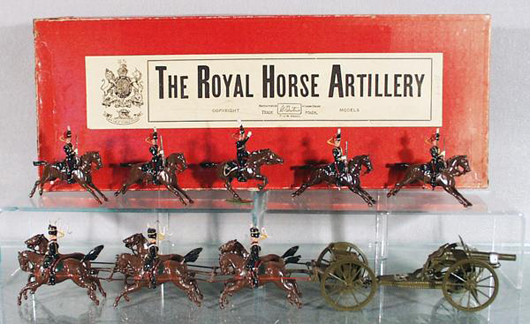 The Britains 39 Royal Horse Artillery set is rated C6-8 and has a $300-$400 estimate. Image courtesy of Lloyd Ralston Gallery.

With the bandmaster and 10 musicians, this key-wound Heyde 347 music box is in working condition. Image courtesy of Lloyd Ralston Gallery.

Of the six mounted figures on this Heyde Camel Corps four are missing helmet spikes. The estimate on the 90mm set is $1,700-$2,000. Image courtesy of Lloyd Ralston Gallery. 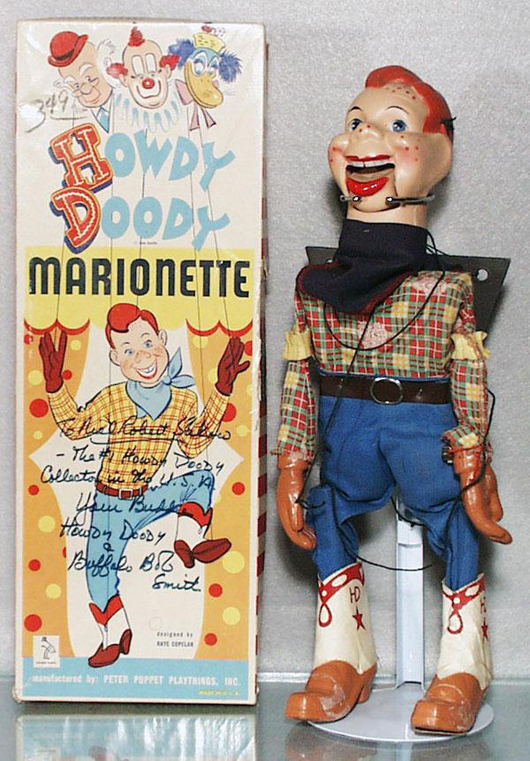 Buffalo Bob Smith, host of the Howdy Doody show, inscribed and signed the box of this marionette depicting Howdy. The 15-inch-tall figure has a $100-$200 estimate. Image courtesy of Lloyd Ralston Gallery