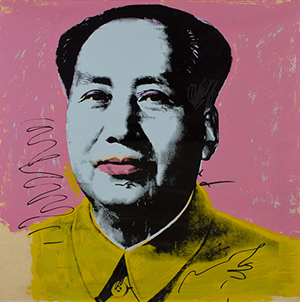 ST. PETERSBURG, Fla. (LAPRS) – In the 1980s, New York’s gritty Lower East Side was a hotbed of aspiring artists and entertainers with the common goal of achieving fame and success. Two of the kindred spirits drawn to each other within the fast-paced microcosm of music, art and youthful freedom were British-born artist, dancer and model Martin Burgoyne and his best friend/roommate Madonna. On February 9, Myers Fine Art will auction the Burgoyne family’s archive of mementos from their late son’s New York days as the centerpiece of its 20th Century Decorative Arts sale. Internet live bidding will be available through LiveAuctioneers.


“Like so many talented young people who had not yet been ‘discovered,’ Martin Burgoyne worked a variety of jobs to get by while building a name for himself as a graphic artist,” said Mary Dowd, co-owner of Myers Fine Art. “He worked as a dancer, model and even a bartender at Studio 54. During that time, he and Madonna were very much a part of each other’s lives and socialized with a large circle of friends that included Andy Warhol, Keith Haring and Jean-Michel Basquiat. Tragically, Martin died at the age of 23, but he left quite a legacy. His parents, who are now retired in Florida, have been the guardians of his art and other mementos entered in our February 9th auction.”

Burgoyne’s portfolio of 12 original colored-pencil drawings, some of them depicting Madonna, were chosen to grace both the front and back covers of the pop star’s 1983 debut 12-inch dance single, “Burning Up.” The portfolio of original art is estimated at $2,000-$4,000.

A further testament to Burgoyne’s inextricable involvement in Madonna’s burgeoning career is the framed RIAA Platinum Record award ($600-$900) he received for his friend’s self-titled 1983 debut album, and a framed gold record that had been presented to Madonna by WEA Records for the single “Holiday” ($400-$600).

An extensive trove of Polaroids and studio photos, documents Martin and his friends at work and at leisure in their collective comfort zone. A candid Polaroid of Martin – then a student at Pratt Institute – and Madonna – who was on the verge of stardom – shows them in the fashions and pastel-colored hair typical of the early 1980s. “Madonna is already revealing her individuality, with rosaries draped around her neck,” Dowd noted. The photo is estimated at $800-$1,200. Other prized Polaroids include one taken of Burgoyne looking like a latter-day James Dean with friend Keith Haring (1958-1990), against the backdrop of a Haring artwork. Estimate: $800-$1,200. A color photo of Burgoyne with Madonna in a recording studio could realize $800-$1,200 at auction.

On September 4, 1986, a party was held at Manhattan’s Pyramid Club to raise funds for medical bills that had mounted during Burgoyne’s treatment for AIDS. For this event organized by his friends, Andy Warhol and Keith Haring collaborated on the design for the invitation. The original Warhol graphite on rag paper portrait of Burgoyne that was featured on the invitation is entered in the auction with a $40,000-$50,000 estimate. Mounted and framed under glass, the 32 by 24-inch artwork is signed “Andy Warhol 86.” Haring’s 14 by 11in mounted and framed original marker drawing used for the inside of the invitation is signed “Haring!!” on the arm of a figure shown at lower right. It is also signed “Kermit Oswald” on the reverse stretcher. Estimate: $3,000-$5,000.

The 500-lot auction also contains an outstanding selection of art, furniture, silver, jewelry and historical objects. A collection of 19 Leon Polk Smith (Native American, 1906-1996) geometrical abstract artworks – including painted-wood sculptures, paintings of various sizes, large-scale maquettes and collages on paper – are featured in the fine art section. The works encompass a timeline from the 1950s-1980s and are from Smith’s assistant and companion of four decades, Robert Mead Jamieson.

Other artworks of note include an Andy Warhol (American, 1928-1987) original screen print “Mao #91,” measuring 36 inches square and numbered 56/250. The 1972 print made at the Styria Studio is estimated at $35,000-$50,000. Also having a Warhol connection is a 3ft-long painted-canvas sardine with movable tail, which retains its Sotheby’s sticker from the highly publicized 1988 auction of cookie jars and other items from the pop art legend’s estate.

Several important furniture lots will be offered. A circa-1940 Domenico Mortellito (Italian-American, 1906-1994) carved lacquer linoleum table/bench comes to Myers from the estate of fashion photographer Gene Fenn (1911-2001). An unusual Morellito credenza carved with signs of the zodiac will also be auctioned.

A set of 12 Hans Wegner “The Chair” or “Round” chairs from the Manufacturers Trust building in New York is worthy of note. The classic chairs were ordered in the 1950s to furnish the bank’s New York headquarters. Complete sets of 12 are rarely encountered, especially those made in the 1950s. Estimate: $10,000-$15,000.

A Poul Norreklit (Danish) rosewood credenza was originally purchased in the late 1950s in Hawaii. “It is a form that seldom appears in US auctions,” said Dowd. In original, untouched condition, it is estimated at $4,000-$6,000.

Other furniture highlights include an illuminating post-modern electric blue coffee table and other pieces from the New York summer home of Phil Stanton, founding member of the Blue Man Group.

A small collection of Buccellati sterling silver pieces is led by a decorated caviar server estimated at $2,000-$3,000. Among the pieces of fine jewelry to be sold, a highlight is an Edwardian 18K white gold convertible necklace with 4 carats of diamonds. Estimate: $4,000-$6,000.

Of great historical significance is a small collection of items connected to the family of Tsar Nicholas II of Russia, and which will be apportioned into three auction lots. The grouping includes two 1899 signed photos of Nicholas and his wife, the Tsarina Alexandra, which were given to Secretary of the Interior Ethan A. Hitchcock while he was Ambassador to Russia under President William McKinley. The collection also includes a gift given to Hitchcock by Tsar Nicholas II: a Faberge parasol with a guilloche enameled gold and diamond handle created by premier Faberge designer Michael Perchin. Estimate: $4,000-$5,000.

Myers Fine Art’s Sunday, February 9, 2014 auction of 20th century decorative art featuring the Martin Burgoyne collection will commence at 12 noon Eastern Time. A preview will be held from 10-6 on Saturday, February 8, and from 10 a.m. till noon on auction day. The gallery is located at 1600 4th St. North in St. Petersburg, FL 33704.

View the fully illustrated catalog and sign up to bid absentee or live via the Internet at www.liveauctioneers.com. 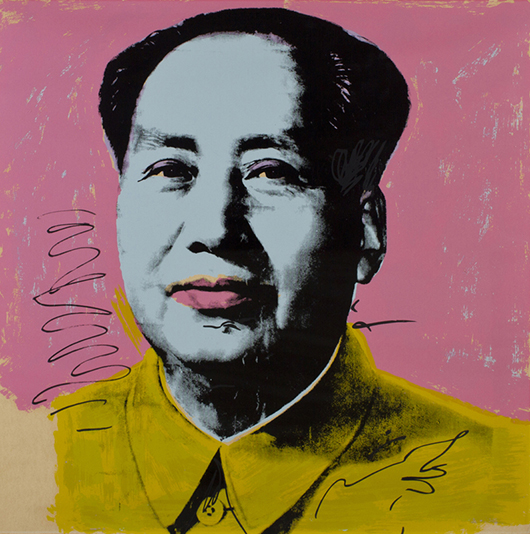 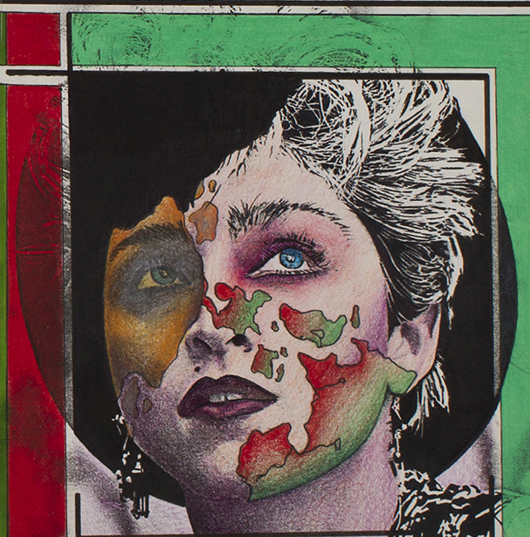 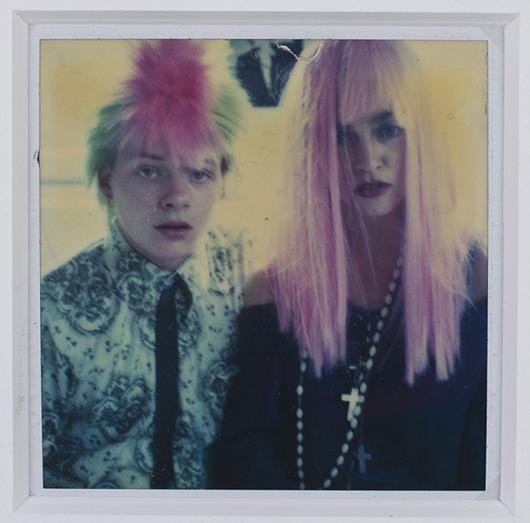 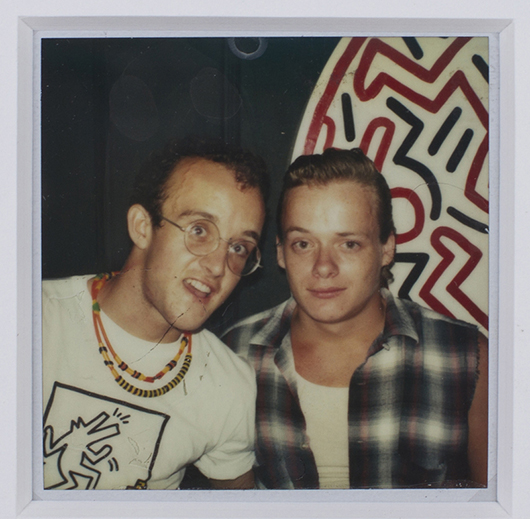 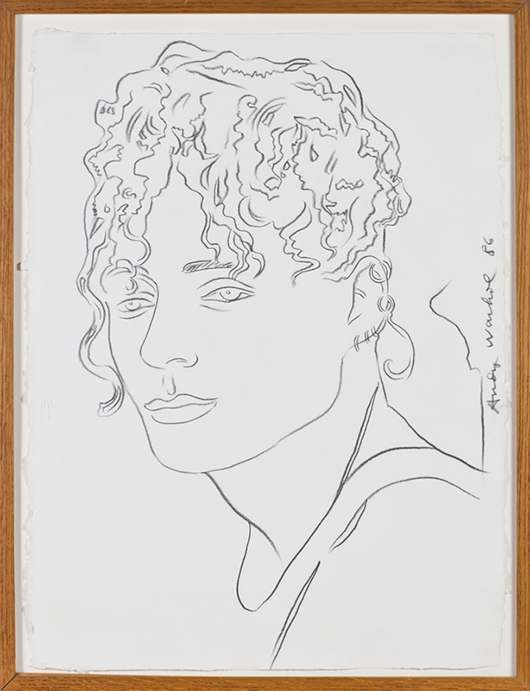 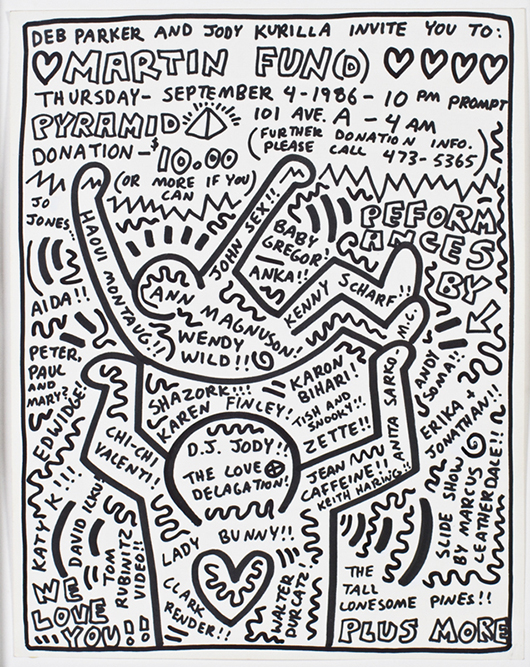 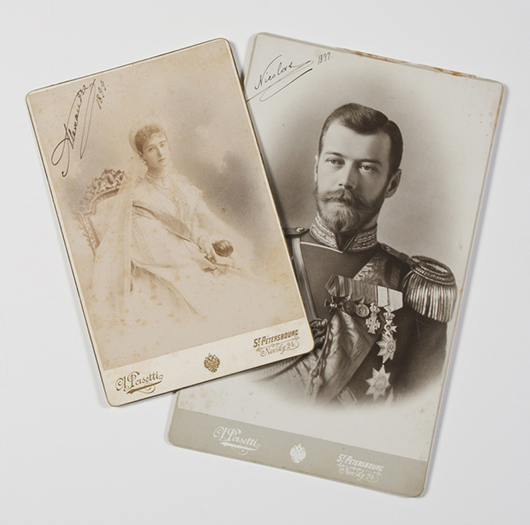 1899 signed photos of Tsar Nicholas and Tsarina Alexandra given to the original owner, US Ambassador to Russia Ethan A. Hitchcock, who served under President William McKinley. Provenance: Estate of Anne Hitchcock Sims. Myers Fine Art image. 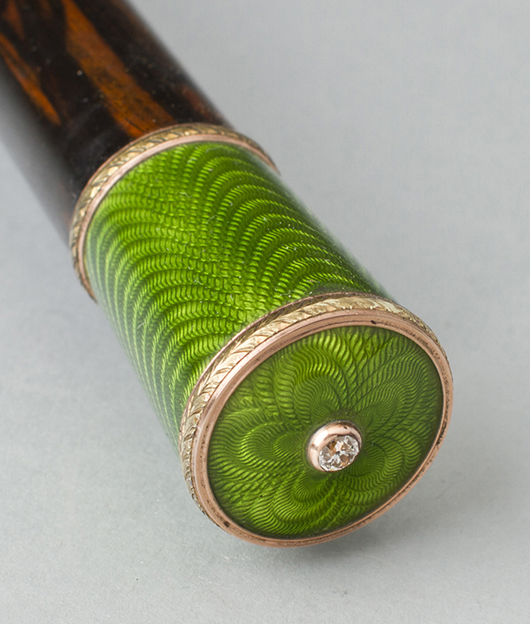 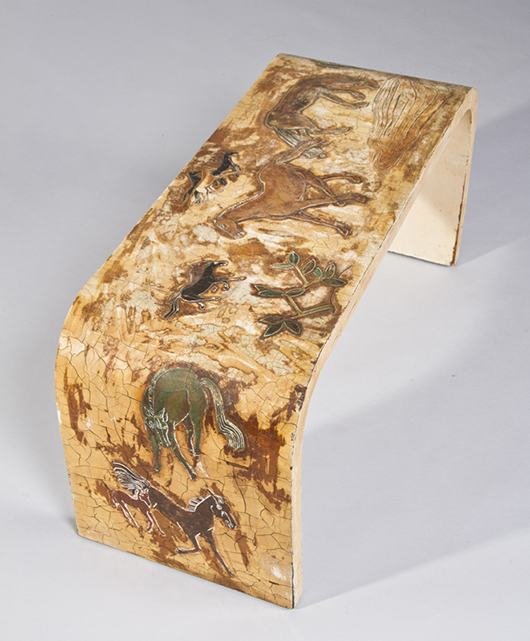 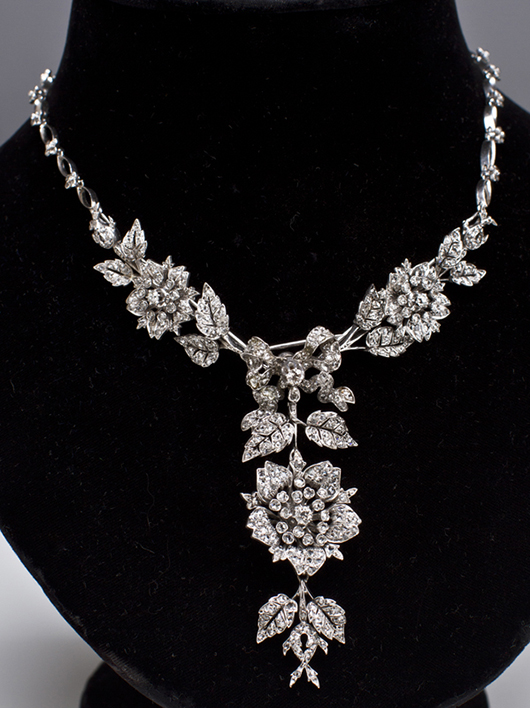 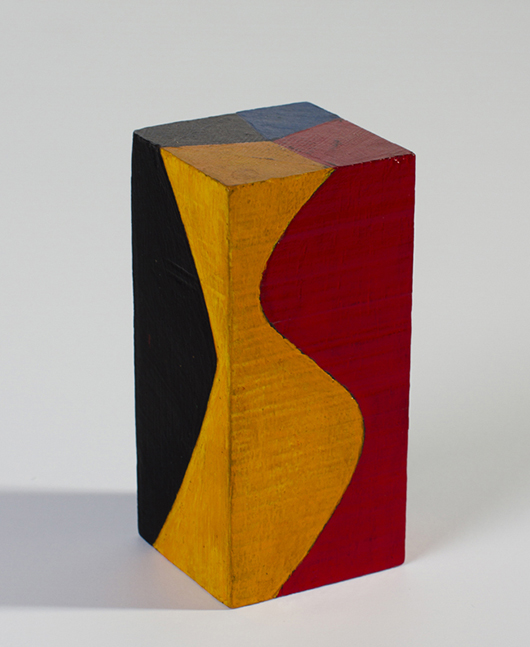