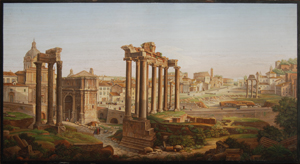 ST. PETERSBURG, Fla. – A remarkable Italian micromosaic artwork depicting the Roman Forum and attributed to Vatican artist Cesare Roccheggiani has emerged from a Florida residence after nearly 90 years of unobtrusive display and will be auctioned on Jan. 30, 2011. The important estate discovery will be offered at Myers Auction Gallery in St. Petersburg as the star attraction in a 500-lot sale of fine European and Asian antiques, with Internet live bidding through LiveAuctioneers.com.

Measuring 59 inches wide by 32 inches long and weighing over 100 lbs., the circa-1870s panoramic depiction of Rome was composed from hundreds of thousands of minute pieces of non-reflective glass. It is believed to be the work of master mosaicist Cesare Roccheggiani, who was active at the Vatican workshops from 1856 to 1864.

“While unsigned, we believe it is almost certainly the work of Roccheggiani,” said Michael Myers, founder and co-owner of Myers Auction Gallery. “An 1879 micromosaic nearly identical in size and subject matter, artist-signed by Rocchegiani, was auctioned in December at Christie’s London gallery for more than half a million dollars.”

Quite likely, the glass mosaic to be auctioned by Myers was a commissioned work created for a wealthy nobleman or aristocrat visiting Italy during a Grand Tour of Europe. “Many Italian artists capitalized on the opportunity to sell mosaic jewelry and miniatures to the influx of well-heeled visitors of that period, but few possessed Roccheggiani’s ability to produce a monumental micromosaic of such superior quality,” Myers said.

“It’s so luminous, it almost looks like a photograph. It even fooled a visitor who walked into our gallery and thought they were looking at a picture on a flat-screen TV,” added Mary Dowd, Michael’s wife and business partner.

Since the 1920s, the artwork attributed to Roccheggiani had rested above a mantel in the residence of a prominent Tampa businessman. When the home was sold in the 1980s, the buyer was given the option of purchasing some of the existing furnishings. The micromosaic was among the pieces selected. Now, through descent, the estate artwork is headed to auction with a conservative $100,000-$200,000 estimate.

Approximately 30 lots of Asian and European carved ivory works are scheduled to sell. Within the grouping are fans, figures and four extremely desirable 19th-century miniature portraits, each depicting a member of Russia’s Romanov family.

An extensive array of excellent-quality 18th- and 19th-century European sterling silver will be offered, with highlights including a 1797 George III sterling tea caddy by Daniel Pontifax, London; an 1819 Rebecca Emes, London, sterling decanter set; and a variety of ornate hollowware and flatware by various Continental makers. Four hallmarked sterling serving platters by Jean Emile Puiforcat (French, 1897-1945) will cross the auction block, as well. Three will be auctioned as one lot with an estimate of $3,000-$5,000; while a fourth platter will stand on its own with an estimate of $1,500-$2,000.

A featured attraction in the sale is the selection of antique Japanese cloisonné by master makers, a category that Mary Dowd said “has really been bringing premium prices lately.” A Namikawa Sosuke (1847-1910) artist-signed tray to be auctioned is similar to one that sold for $33,000 in 2008. Other Japanese highlights include samurai swords, sterling silver, scrolls, and silk embroidered with monkey and tiger motifs.

European ceramics by Meissen, Royal Vienna, KPM, Sevres, Dresden and Delft will go under the hammer. Several sets of ornate service plates are included in the grouping, as is a George Jones majolica doves centerpiece, estimated at $1,000-$2,000.

A top lot within the selection of 19th- and early 20th-century gold gemstone jewelry is a circa-1825 bracelet by Austrian Crown Jeweler Piote et Kochert. The enameled 18K gold bracelet is set with stones and bears an Islamic inscription. Estimate: $4,000-$6,000.

The auction offering is completed with a lineup of fine 18th/19th-century European clocks and more than 25 fresh to the market 19th- and early 20th-century Oriental rugs, all from estates. Among them are Tabriz, Kashan and room-size Chinese and Persian carpets. A noteworthy addition to this portion of the sale is an early Kai-tag Daghestan Persian textile.

Myers Auction Gallery conducts only two sales per year. “We’re very particular about what we sell,” Mary Dowd explained. “We would rather take our time and present only top-quality estate material. It takes a commitment to do this properly, but it’s the reason we have such a faithful following of buyers.”

LiveAuctioneers.com will provide the Internet live bidding. For additional information on any lot in the sale, call 727-823-3248 or 727-823-3249, or email auctions@myersfineart.com. 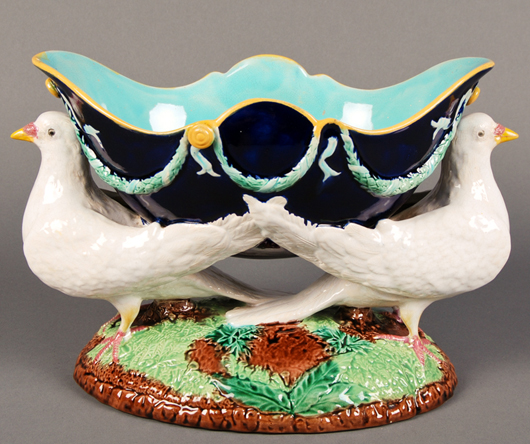 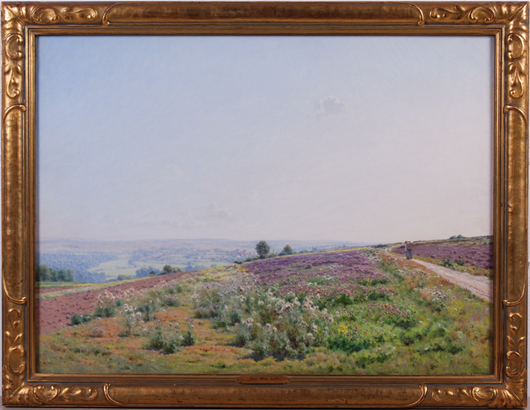 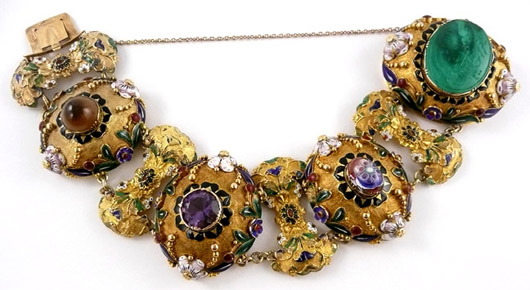 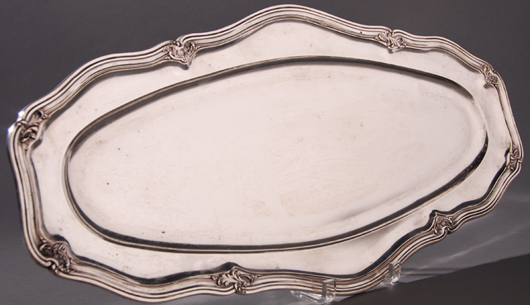 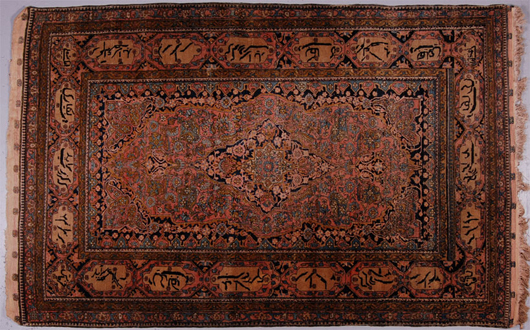 Kashan inscription rug, one of more than 25 Oriental and Persian estate rugs to be auctioned. Myers Auction Gallery image.