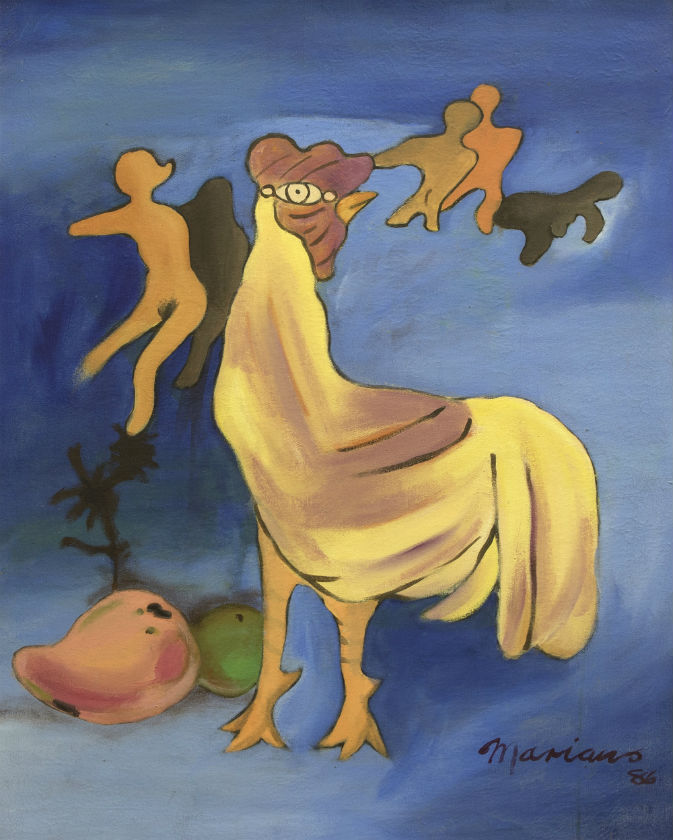 MONROVIA, Calif. – Following extensive building renovations and the adoption of a number of preview and auction-day amenities designed to make the auction experience more comfortable for bidders and sellers alike, Moran’s is now working to further specialize their auction sessions by collector category as well as by price point. Last year saw the introduction of the Studio Auction model: sessions featuring property with approachable estimates at $2,000 and below. Moran’s has expanded this model, originally introduced for fine art auctions, to encompass decorative art as well as jewelry. Now, Moran’s is working on funneling their higher-value or more collector-specific auction items into more focused, genre-specific Decorative Art Auctions. The April 25 auction will be the first of these specialized auction dates, consisting of three stand-alone auction sessions: “20th Century and Contemporary Design,” “Art of the American West” and “The Traditional Collector.” Absentee and Internet live bidding will be available through LiveAuctioneers.

The first auction session, “20th Century and Contemporary Design will kick off at 4 p.m. Pacific, and features modern and contemporary works of fine art alongside furniture, art glass, sculpture and art pottery by a wide range of modern artists.
Fine art highlights include Rooster (above) by Cuban modernist painter Mariano Rodriguez (1912-1990). Executed in the artist’s signature abstracted style, the work is expected to bring $18,000-$22,000 at the April 25 sale. Japanese artist Shiryu Morita (1912-1999) will be represented in the catalog by a lacquer on panel work of an abstract dragon. Measuring over 5 feet tall, the work has been assigned a $10,000-$20,000 estimate.

Also from a local southern California consignor, a collection of Picasso for Madoura art pottery is expected to achieve strong prices; the most sought-after of the lots, a Femme du Barbu pottery pitcher decorated with a woman’s face over a geometric backdrop, is expected to earn between $12,000-$18,000.

Mid-century furniture design buffs should also be excited to see an excellent example of modern functional furniture from innovative designer and master craftsman Sam Maloof (1916-2009 Alta Loma, Calif.) among the offerings (below). Dating to 1971, and one of only six similar examples made, Maloof’s cradle hutch was originally designed and built in-studio for the family of Joseph Anthony Gatto, a jewelry designer, art teacher and personal friend of Sam Maloof. Exquisitely crafted and finished, the console has remained in the hands of the Gatto family since its creation; this exceptional fresh-to-the-market find is estimated to bring $40,000-$60,000 at the auction block. 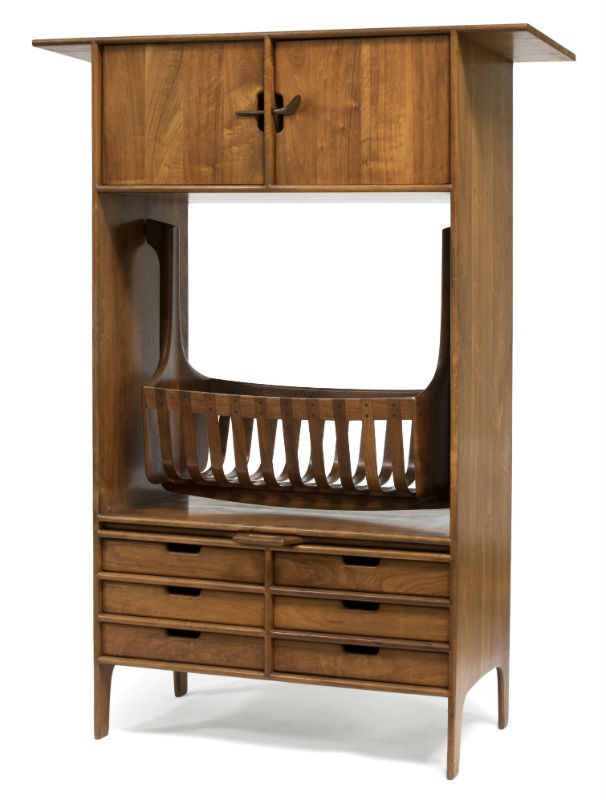 Another fine example of 20th American design, this one dating to the 1920s, comes in the form of a charming gambling machine/trade stimulator, called Lukat – the Lucky Cat. Consigned during one of Moran’s walk-in valuation days by a Pasadena collector, the cast-iron cat is a highly collectible piece of Americana; Lukat carries a $20,000-$30,000 estimate.

The top-valued lot for the session is a Navajo Ute-style first phase chief’s blanket, one of the rarest iterations of classic Navajo weaving. This blanket, along with a second phase chief’s blanket also slated for sale at this auction, was gifted to the personal butler of Mrs. Randall Morgan of Chestnut Hill, Pa., in the early 20th century and has been kept in the family since. Dye testing has confirmed that the blanket dates to the 1840s or 1850s. Presented in exceptionally good condition, the first phase blanket been assigned a $100,000-$200,000 auction estimate (below). The aforementioned transitional second phase wearing blanket (dating to the 1860s or 1870s), carries a $30,000-$50,000 auction estimate. 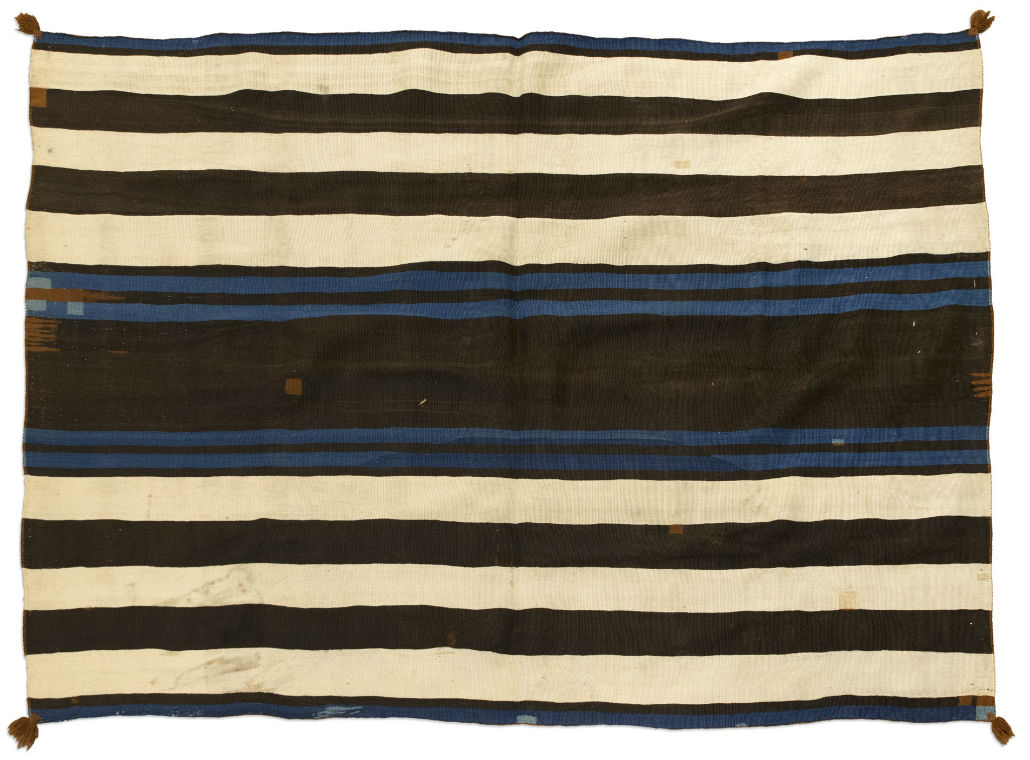 Western art as a whole has proven popular with Moran’s buyers over the last few years, and the house is hoping to capitalize on that affinity with some stellar offerings slated for inclusion in the Art of the American West catalog. Well-regarded wildlife painter Luke Frazier’s (b.1970 Providence, Utah) moody oil painting Omniscient, which depicts a mountain goat standing sentinel on a stony outcropping, is one of two works by the artist slated for sale on April 25. Omniscient is expected to earn $3,000-$5,000. In addition to the trove of contemporary western works slated for sale, Moran’s is also pleased to offer work by some prominent early 20th century Western-genre painters. Los Angeles-based painter Henry Clive (1881-1960) is also represented in the catalog with a beautifully rendered portrait of an American Indian warrior; the man is depicted wearing a Germantown wearing blanket with woven orange accents which play off the golden tones in the sunset’s glow on the buttes in the background (estimate: $3,000-$5,000). 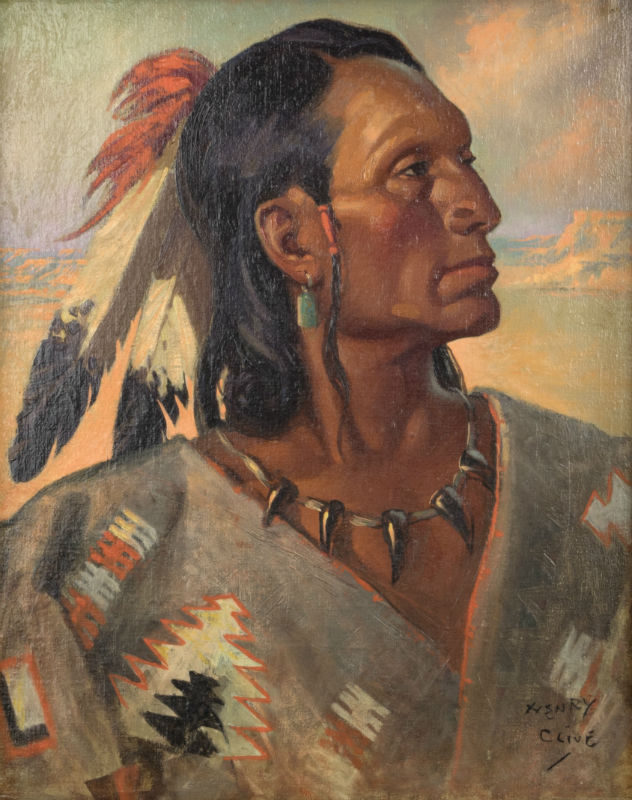 Catering to collectors of French furniture, art glass, silver and objects of vertu, “The Traditional Collector” will open for bidding at 7:30 p.m.

Figural bronzes and sculpture will round out the fine art offerings, including classical, mythological and religious subjects. Contemporary artist Richard MacDonald (b. 1946 Monterey, Calif.) is represented in “The Traditional Collector” with his intricately modeled bronze sculpture of a female dancer playing the trumpet; titled Trumpeter Draped, the work is expected to earn between $8,000 and $10,000 (below). 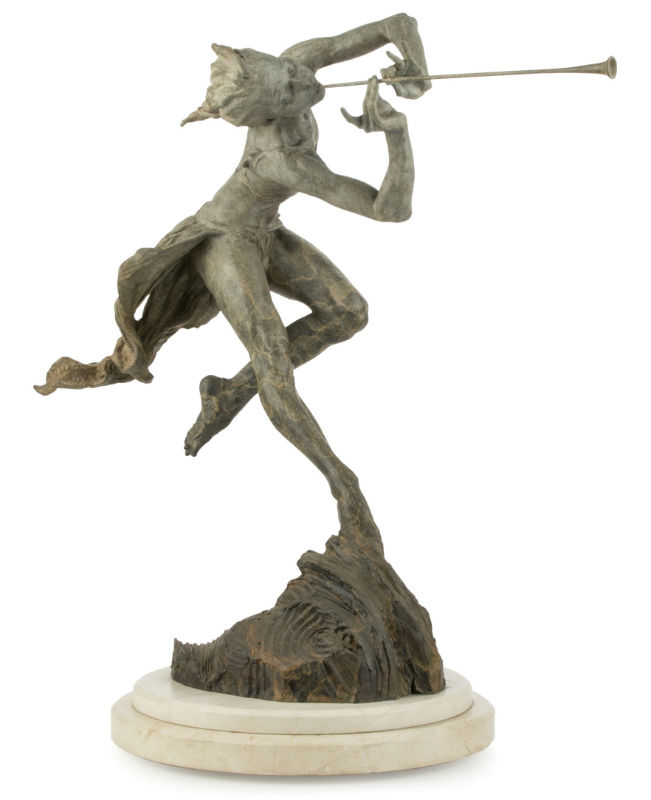 Richard MacDonald (b. 1946 Monterey, Calif.), known for his painstaking attention to the musculature of his athletic, dynamic subjects, will be represented in Moran’s ‘The Traditional Collector’ catalog with this piece, titled ‘Trumpeter Draped.’ Estimate: $8,000-$10,000. John Moran Auctioneers image

An exceptional Louis XV-style gilt-bronze mounted commode with foliate inlay by Parisian cabinetmaker Francois Linke (1855-1946) anchors the session and is sure to turn heads with its finely modeled mounts; the piece will be offered with a $30,000 to $40,000 estimate.

Silver and porcelain by well-known makers such as Buccellati, Meissen, Christofle, and Royal Crown Derby will be in abundance; one of the session’s expected top lots is an extensive .950 silver flatware service by Parisian company Puiforcat, consigned by a prominent Las Vegas collector. The service consists of 352 pieces in the classic Moliere pattern, and may well exceed its $20,000-$30,000 estimate.