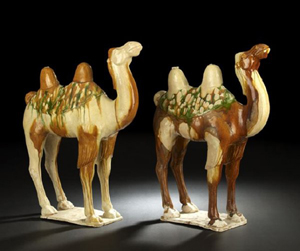 NEW ORLEANS – A spectacular pair of Tang Dynasty reverse-glazed tomb ware camels lead a parade of exceptional treasures that are presented by New Orleans Auction Galleries on March 27-28. More than 1,200 lots of antiques, fine art and estate jewelry will be offered at the auction at New Orleans Auction’s gallery at 801 Magazine St. LiveAuctioneers will provide Internet live bidding.

The Sancai reverse-glazed figures depicting Chinese tomb ware camels both stand 21 inches high on rectangular bases. Thermoluminescence tests confirm both figures correctly date to 618-917 A.D. Both are highly detailed with mottled three-color saddlecloths and incised hair detail. The boldly colored pair carries a $14,000-$18,000 estimate. They will sell during the Saturday session, which will get under way at 10 a.m. Central.

Also Tang Dynasty is a large and rare pair of Chinese tomb guardians known as lokapalas. Each 34-inch-tall figure is dressed in armor with horned dragon epaulettes and phoenix helmets, one with flames. The figures have demon-like faces and stand on the grotesque figures of conquered enemies. The pair, estimated at $9,000-$12,000 estimate, has generated a lot of interest, said Charles Cage of New Orleans Auction.

A small collection of 20th-century carved ivory figures, consigned by a Columbus, Ga., museum, will be sold late on the second day of the sale, which will begin at 11 a.m. Central.

The furniture highlight of the sale comes Sunday in the form of a late Victorian satinwood and polychromed library case after a design found in Thomas Sheraton’s The Cabinet-Maker and Upholsterer’s Drawing-Book, originally published in 1793, plate 3. This monumental bookcase stands 98 1/2 inches tall by 127 inches wide by 34 1/4 inches deep. It carries a $50,000-$80,000 estimate.

In addition to a nice selection of regional art, New Orleans Auction will also showcase a 47 1/2-inch bronze sculpture titled Queen of Angels by Victor Salmones (Mexican, 1937-1989). The large patinated bronze figure depicts the ascendant Virgin Mary, above the clouds and crescent moon. It is signed on the base “V. Salmones 10/10 M-42.” It has a $6,000-$9,000 estimate. This and two additional Salmones bronzes are being sold to benefit Friends of the Family in Los Angeles, a nonprofit family resource center.

Estate jewelry will include a brilliant platinum and diamond lady’s ring composed of a central round-cut 4.60-carat natural light yellow diamond set in a squared mounting with 1.04 carets of round brilliant-cut diamonds in the surround mount. It carries a $25,000-$40,000 estimate. 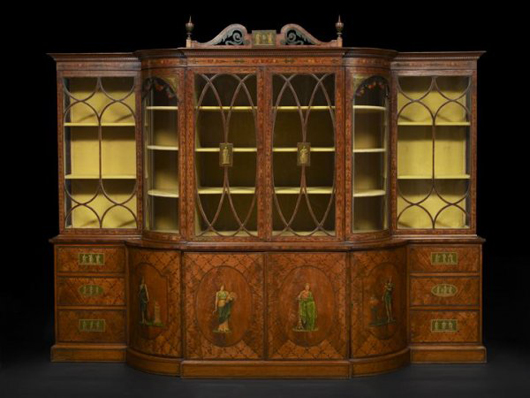 Roman goddesses Proserpina, Ceres, Juno and Fortuna are depicted on panels on this huge satinwood library case from the fourth quarter of the 19th century. Inspired by a Sheraton design, the nearly 10-foot-wide case has a $50,000-$80,000 estimate. Image courtesy New Orleans Auction Galleries Inc. 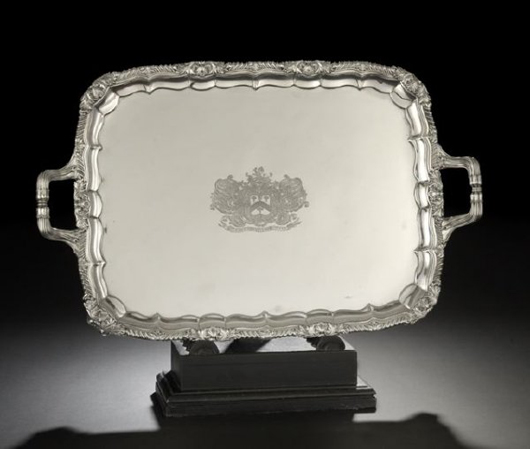 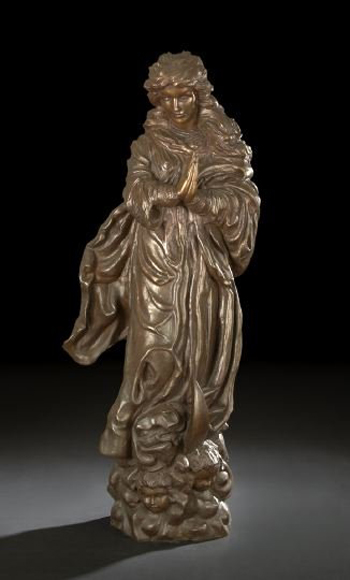 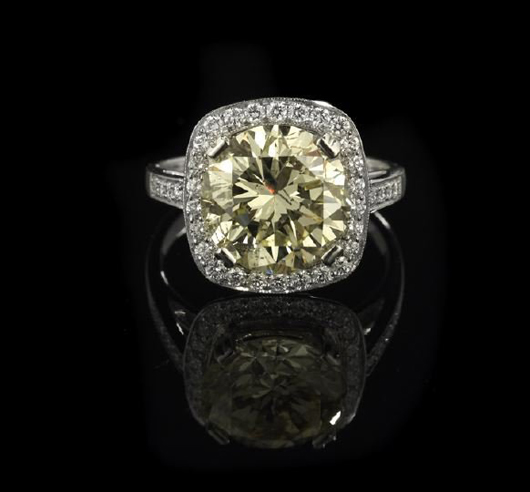