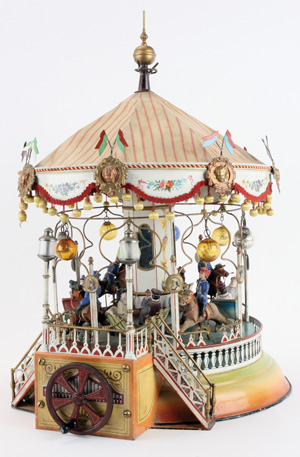 Headlining the 932-lot sale are the Athelstan and Kathy Spilhaus antique toy collection and the Rick Ralston collection of European and American trains and trolleys. The sale’s anchor collections are complemented by numerous attic discoveries and choice single pieces from a number of consignors.

The late Dr. Athelstan Spilhaus and his wife Kathy embraced all forms of toys – automata, boats, trains, wind-ups, steam toys and music boxes – whether of tin, wood or iron. The couple pictured many of the items to be auctioned in their 1989 book Mechanical Toys – How Old Toys Work.

Dr. Spilhaus loved the variety of animals created by Decamps, a 19th/early 20th-century French company noted for its automata. The mechanical marvels in the doctor’s collection include a strutting peacock and a pair of elephants. Two highly unusual French automata are the Burning Building and even more complex Military Parade Ground. The latter toy’s paper-covered box opens to reveal an array of lithographed tin soldiers, on foot and horseback, parading along a circuitous route to musical accompaniment. Another special production from Decamps’ range of 1920s toys is the collection’s 4½-ft-long animated butcher shop display.

During the collecting odyssey she shared with her late husband, Kathy Spilhaus developed a fondness for Schoenhut wooden toys. She amassed a fair number of scarcer animals created by the Philadelphia toymaker, including a wolf, hyena, polar bear, gorilla, kangaroo and zebu; as well as a Teddy Roosevelt figure.

A balloonist and two zeppelins from the Spilhaus collection join the field of aeronautical toys entered in the sale by a different consignor. And while German and French productions comprise the majority of toys in the Spilhaus collection, other nationalities are represented. The rare, hand-operated artist, for example, is of English manufacture.

Dr. Spilhaus was intrigued by mechanical and recorded sound, and collected early cylinder and disc phonographs, as well as music boxes. Two particularly fine entries in the sale are his Stella 17-inch disc music box and a rare and wonderful Edison phonograph doll with original mechanism. An example of Edison’s remarkable “talking doll” appeared on the cover of the April 26, 1890 issue of Scientific American magazine.

The second major collection in Barrett’s Nov. 16-17 auction is that of Rick Ralston, author of Cast Iron Floor Trains. Many of Ralston’s iron trains were sold some years ago, but his love of trains endured, so he turned his attention to other categories: pressed steel floor trains, wood and brass folk art trains; and steel and wood trolleys. The European corner of his collection included prized sets by Issmayer and other prestigious brands. His diverse array of railway handcars featured a number of Disney character versions, including all four color variations of the Lionel Mickey Handcar and a Wells-Brimtoy handcar.

American-made trains include several sets by Beggs, a very fine Carlisle & Finch freight set, Lionel and American flyer sets, and still others by Ives, Welker & Crosby, Dorfan, and Aster, which manufactured the live-steam “Virginia & Truckee – Reno” locomotive and tender. Ralston also consigned a variety of track trains, an array of pressed-steel and sheet-metal floor trains and an appealing group of handmade and folk art trains. Many of the trains are hard to find and in superb condition.

Barrett describes the combination baggage/mail car in the auction as “the finest salesman’s sample [he has] ever seen.” It was built to demonstrate the Rice Safety Automatic Brake system patented in 1885 and traveled the world as a sales tool throughout the 1890s before its most recent trip to Barrett’s gallery in Bucks County, Pa. Measuring 6 ft long, its amazing details include a clerestory glazed with frosted glass, four sliding doors, and perfectly scaled trucks marked “Wason Mfg. Co.”

Leading the train lots size-wise is a finely crafted, hand-made and fully functional model of the famed speed record holder the Empire State Express. The 7½-ft-long model was fabricated over a period of 13 years by a master machinist who studied the original locomotive that now resides in the Chicago Museum of Science & Technology. A phenomenal production, it tips the scale at 680 pounds.

Rick Ralston also held a longtime interest in friction-powered steel toys made by Clark, Hillclimber, Mason & Parker, and Schieble; and clockwork Kingsbury toys. “Many are in absolutely astounding condition,” Barrett noted. Also from the Ralston collection are more than 50 early cannons and mortars, including finely cast examples from France, Germany and the United States.

The automobilia category is enhanced by a finely handpainted 1930s-era banana delivery truck. The presentation piece was made for the Vienna office of Fyffes of Dublin, the oldest fruit brand in the world.

Classic American toys include two very rare Secor musical characters – an elusive Tambourine Player and equally coveted Lady Pianist. Other clockwork toys include painted tin toys by George Brown and Althof Bergmann & Co. The arrival of an incomparable Althof Bergmann Santa in Sleigh toy was a source of excitement even for Noel Barrett, who has decades of experience in handling the early designs of the fabled late-19th-century New York firm.

For years the only known examples of an Althof, Bergmann Santa in Sleigh were those belonging to the pioneer collectors Bernard Barenholtz and Leon Perelman. A third was later confirmed in the collection of the Margaret Strong Museum. The Santa in Sleigh toy in Barrett’s upcoming sale is believed to be the fourth extant example, and according to Barrett, it is not likely that a fifth exists. It is quite rightly expected to be among the top-finishing lots on auction day and carries a presale estimate of $100,000-$200,000.

Continuing in the American tin section, an extensive array of horse-drawn vehicles includes large-scale Express wagons, a Coal & Wood cart, and a Butcher Wagon. Additionally, there are 12 bell toys, including a scarce Bob & Bruno.

A pre-WWII Buck Rogers 25th Century Laboratory is the rarest toy created to celebrate the trailblazing comic pages space explorer. “This may be the only known example, although there are rumors of another,” said Barrett.

Chosen to grace the cover of the auction catalog, a circa-1910 carrousel by Marklin is considered one of the most sought-after mechanical toys. Figures of eight girls in vis-à-vis chariots and two boys in sailor suits on hide-covered horses ride around a central mirrored column, where 10 additional figures watch the children pass by. An extravagant production with no detail spared, it could sell for as much as $100,000. Barrett sold a similar one in 2005 for $80,000, and these top-of-the-line German carrousels are no less scarce today, Barrett said.

Two extremely fine carrousel animals will be auctioned. A white “galloping” horse with well-detailed flowing mane, estimate $4,000-$5,000, was crafted by Charles I.D. Looff (1852-1918), the Danish-born master carver and builder of American carrousels whose legacy included the first caroussel at Coney Island (installed 1876). Sharing the Barrett paddock with the Looff horse is a highly detailed cow attributed to French carver and carrousel maker Gustave Bayol. With charm to spare, the cow has alert eyes, brass horns, a bell around its neck and a playful expression. Estimate $4,000-$6,000.

Another item of great importance is The Pittsburgh House, a marvelously decorative circa-1890 architectural model formerly in the collection of the Toy Museum of Atlanta. This exquisite Victorian creation executed in the Carpenter Queen Anne style is fastidiously detailed and thought to have been one of a series of models of great American houses constructed specifically for a turn of the 20th century exhibition. Previously sold at the October 1986 auction of the toy museum’s contents, The Pittsburgh House will reappear at auction on Nov. 17, with a $6,000-$10,000 estimate.

Among the cast iron toys in the sale are a Hubley Four-Seat Brake, a near-mint Dent Fire Patrol, and several early fire toys, including some by Ives. A nice selection of mechanical banks is highlighted by a Cat & Mouse, a Mammy & Child, and a Teddy & Bear – all in exceptional condition. A colorful and beautifully painted Clown on Globe that was found in a dry attic in Reading, Pa., is perhaps the finest of all known examples.

For additional information on any lot in the sale, call 215-297-5109 or e-mail toys@noelbarrett.com. 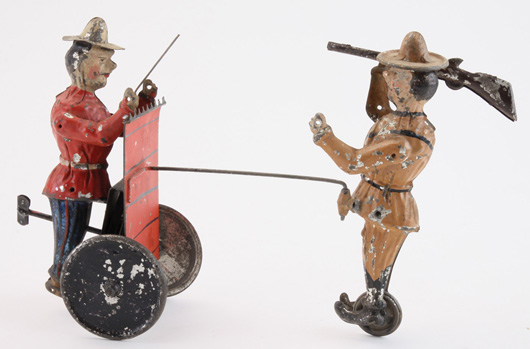 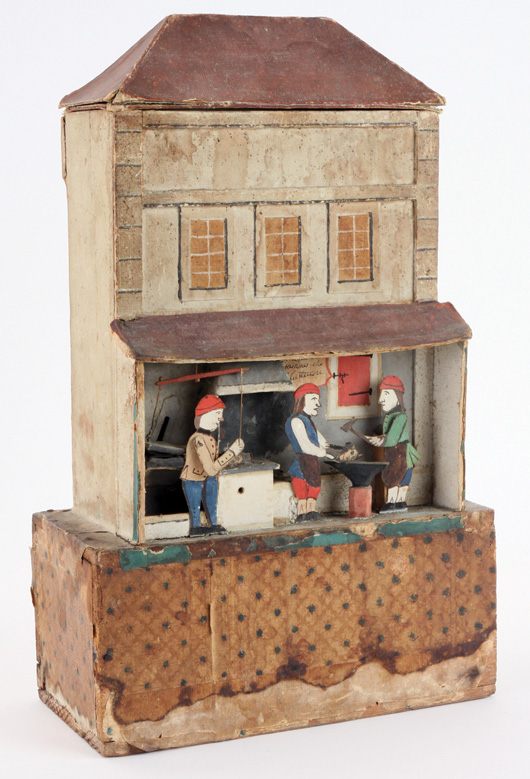 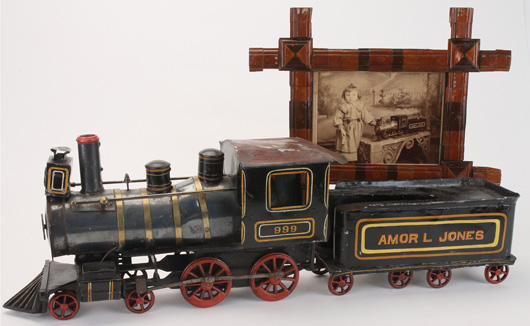 Folk art 999 ‘Amor L Jones’ loco and tender, mixed metals, offered with framed photograph of a little girl for whom the train may have been created. Noel Barrett Auctions image. 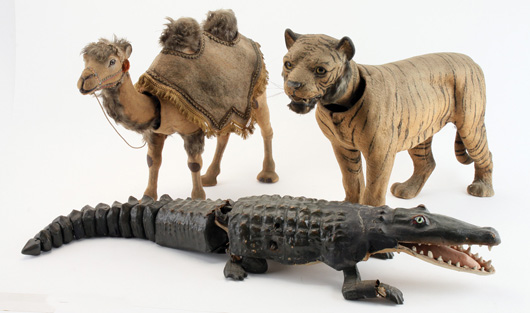 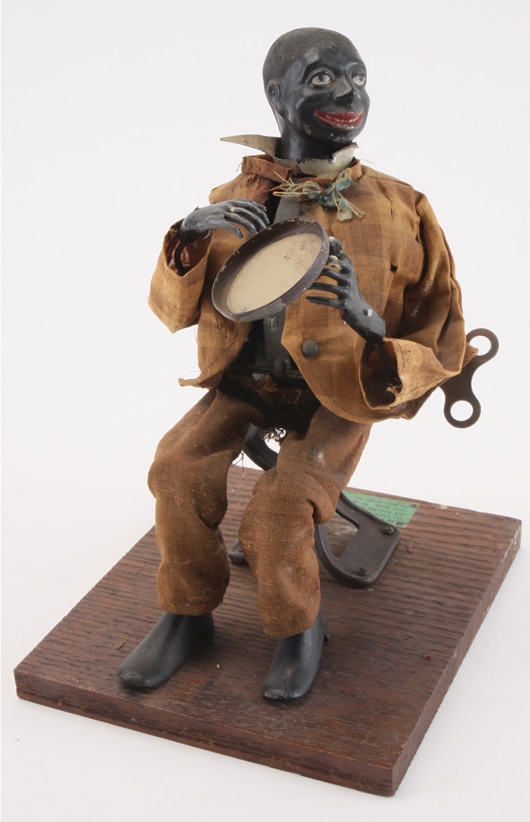 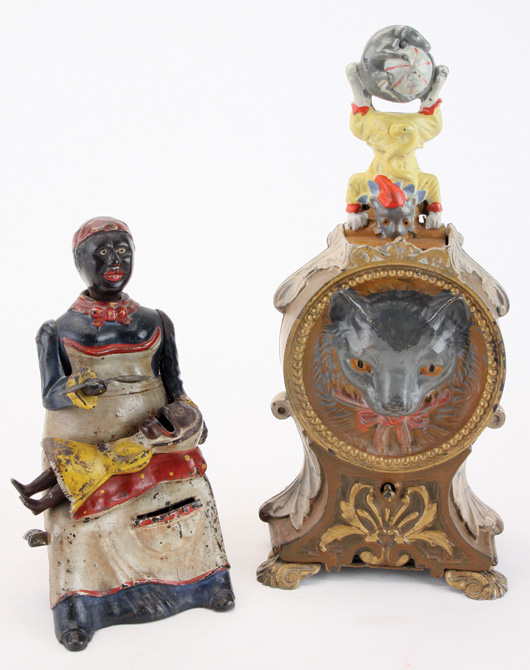 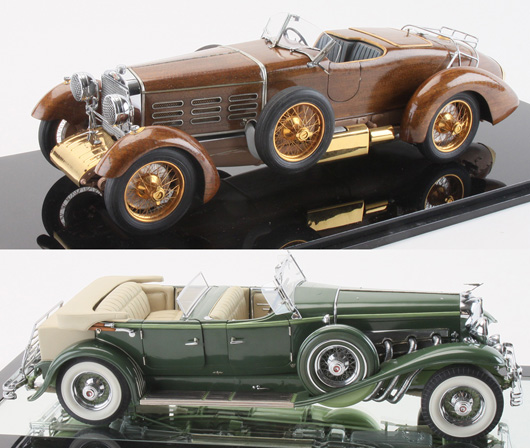