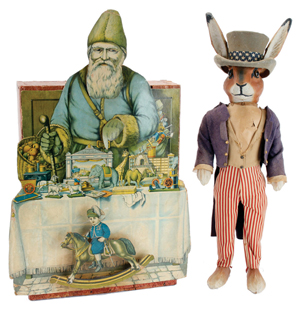 CARVERSVILLE, Pa. – Recent reports of a massive, wild-eyed dragon in the quaint village of Carversville, Pennsylvania, haven’t been a cause for alarm. Locals know that such sightings typically lead straight to Noel Barrett’s gallery, where unusual Americana and toys are gathered for auction around this time each year. The 6-ft-long carved wood dragon – actually an early double-sided, three-dimensional trade sign – is one of a bevy of fabulous advertisements to be presented along with antique toys and novelties in Barrett’s Dec. 5-6 auction in New Hope, Pa. Internet live bidding will be available through LiveAuctioneers.

“There’s such a wide variety of material in this sale. It includes many, many rare items from long-held private collections,” said Barrett. “It’s always a thrill when we dig into a collection and find pieces we’ve never seen before. There’s a lot here to excite collectors of antique advertising and toys, even those who’ve been at it for decades.”

Headlining the sale are toys and trains from the collection of renowned magician John Daniel (1931-2011); horse-riding toys, carousel horses and embellishments from the collection of expert carousel restoration artist Tony Orlando (1944-2013); and dollhouses and rare miniatures from Libby Goodman, founder of Goodman House Museum in Cape May, N.J. In addition, the auction features a wealth of other toys, trains, signs and curiosities from European and American consignors.

Also preparing for the auction spotlight are a Dentzel/Mueller Listener-style horse in original paint and a fabulous C.W. Parker striding carousel camel, ex Leon Perelman private collection. With original paint, beautiful patina and a Parker decal, it is the only extant carousel camel of its era that was designed to move up and down. All other currently known carousel camels of the same period are stationary types. It is estimated at $12,000-$15,000.

Trains from the late John Daniel’s collection carry illustrious provenance. In addition to his work as a magician and manufacturer of magic props and illusions, Daniel was also the manufacturer of John Daniel Trains and president of JAD Railways. Auction pieces from the Daniel collection include a JAD Lines Hiawatha locomotive and tender with boxes, a John Daniel Pennsylvania GG1 passenger set, and other production trains by JAD and John Daniel.

Alongside the aforementioned dragon, which is estimated at $10,000-$15,000, is a formidable lineup of antique signs of every imaginable type. A fancy circa-1900 sign advertising W.J. Peebles Dental Parlors is a full 11 feet long. From the same era, a hotel lobby sign from Lock Haven, Pa., was designed so local businesses could buy advertising space on it. Hand-painted in brilliant colors and superbly preserved, the sign is cataloged with a $3,000-$5,000 estimate. The original outdoor sign for the legendary Perelman Antique Toy Museum harkens to an era when collectors flocked to Philadelphia to visit the historical establishment and its storied collection. Estimate: $600-$800.

As those who know the history of tattoo art in America would testify, it’s rare to encounter Joe Clingan’s circa-1920 “tattoo flash.” The double-sided art samples were displayed to offer patrons a preview of what various tattoos would look like in their finished state. “Previous to now, only two or three of Joe Clingan’s tattoo-flash art were known,” said Barrett. “One is in the Smithsonian American Art Museum.” The auction estimate is $4,000-$6,000. Of a similar vein, an Alcazar tattooed man and woman poster is expected to reach $1,000-$1,500.

From the Libby Goodman/Goodman House Museum Collection, Noel Barrett will offer about 10 larger dollhouses, among them an early English manor house, estimate $1,000-$2,000; and an early American open-front dollhouse, both circa 1840s. Also included will be smaller European houses as well as a group of fully furnished, American-made Schoenhut houses. Rounding out the Goodman grouping is a wide assortment of miniatures and furniture.

A pond yacht that won first prize in an 1896 regatta is an impressive 88 inches long and will pass to the new owner with the actual trophy it won in the 19th-century competition. Estimate $4,000-$6,000. Another historically important item is a 1932 Hudson quarter-scale display model made expressly for the New York Auto Show. “Rather than sending full-size cars to the show, supposedly Hudson sent these well-detailed models. Only seven are believed to have survived in all-original condition,” Barrett said. The example in the auction could realize $20,000-$30,000.

The endless variety of toys includes Lehmann and Martin wind-ups; Schucos (many boxed); Popeye and other comic character toys, skittles, automata, Punch & Judy toys and puppets, zeppelins, steam and clockwork boats; and a few mechanical banks. Among the early American clockwork toys is a boy with a mallet and ball playing a game similar to croquet. To Barrett’s knowledge, it is one of only three that have surfaced to date.

“Many consignors came forward with one or two items each, but they were great things,” Barrett noted. Among them are a Perkins windmill salesman’s sample, $3,000-$4,000; a 19th-century fire pumper model, and a remarkable 1873 icebox from Reading, Pa., that may well have foretold the future, as it was called a “refrigerator.” Its estimate is $1,500-$2,000. A German 52-inch earthenware coffee store display figure hopes to serve up a winning bid of $3,500-$4,500. Also, there are ten Baranger motion displays, three from the collection of John Daniel, who wrote the definitive reference book on the subject.

Noel Barrett’s Dec. 5-6, 2014 auction will commence at 1 p.m. Eastern Time on the Friday; and 10 a.m. on the Saturday. Internet live bidding and online absentee bidding will be available through LiveAuctioneers.com.

For additional information on any item in the sale, call 215-297-5109 or e-mail toys@noelbarrett.com.

View the online catalog and sign up to bid absentee or live via the Internet at www.LiveAuctioneers.com. 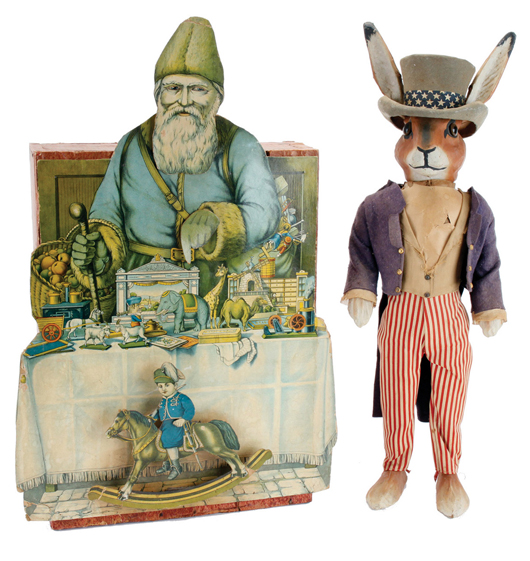 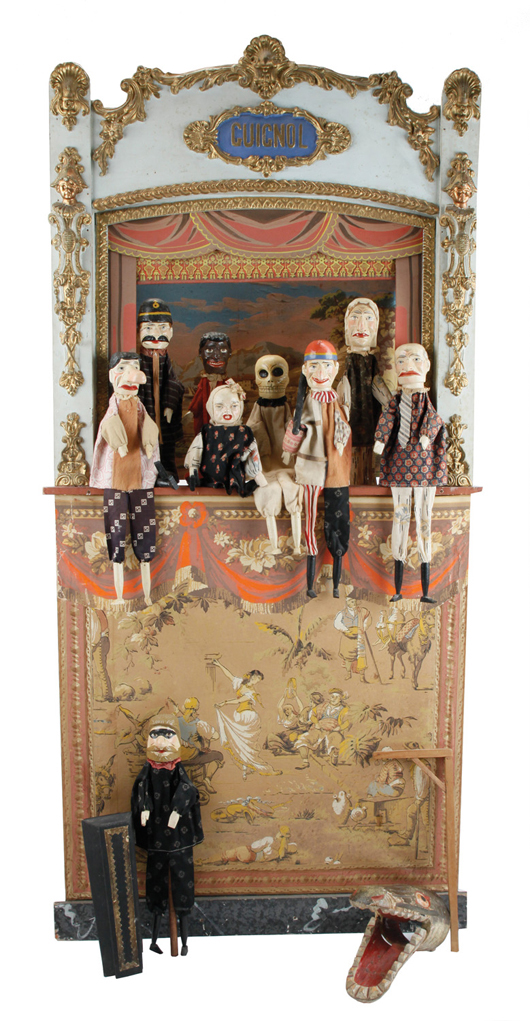 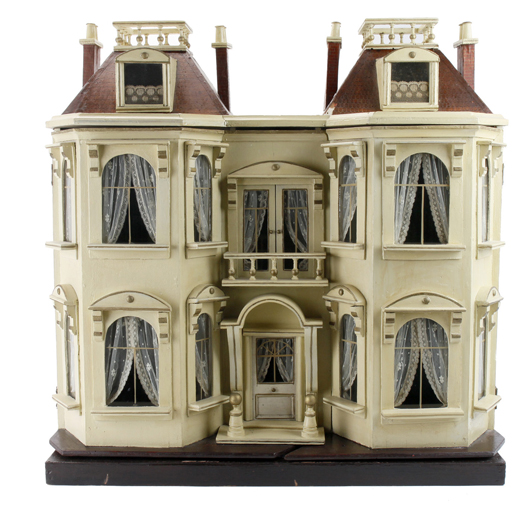 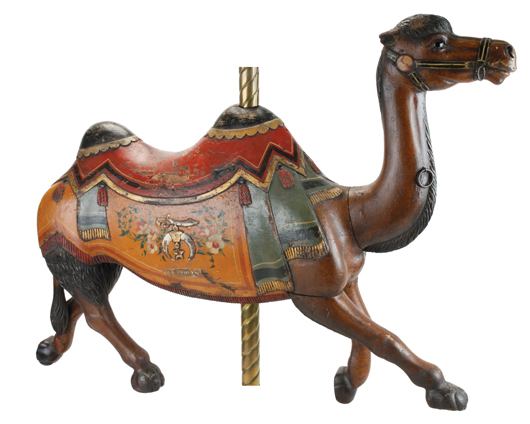 Original C.W. Parker striding carousel camel, ex Leon Perelman private collection, only extant carousel camel of its era that was designed to move up and down, est. $12,000-$15,000. Noel Barrett image 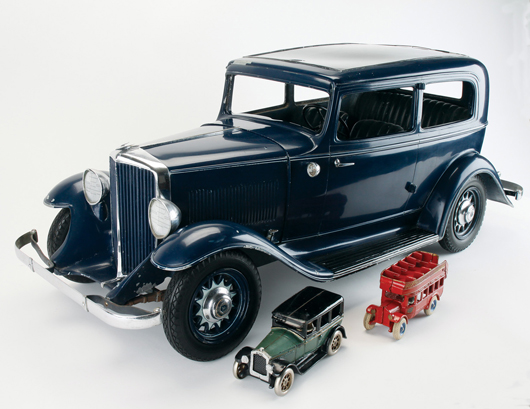 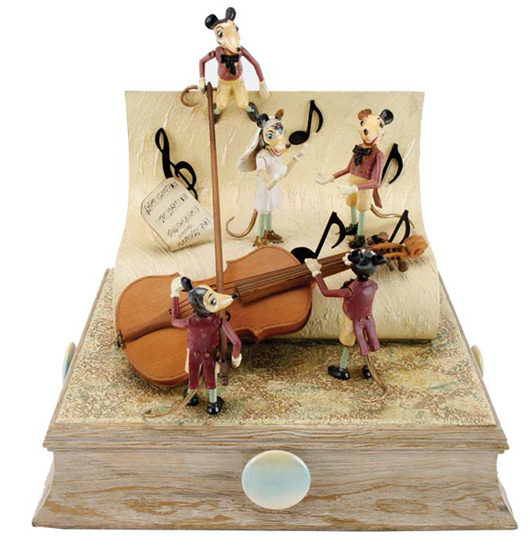 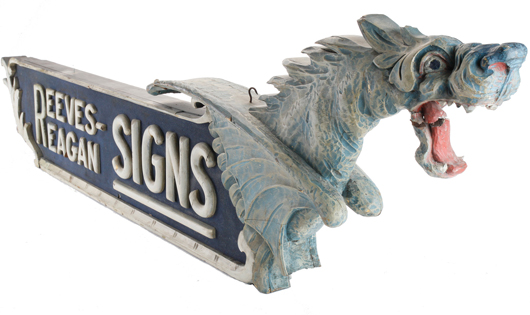 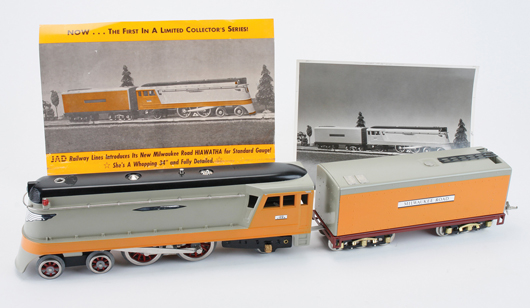