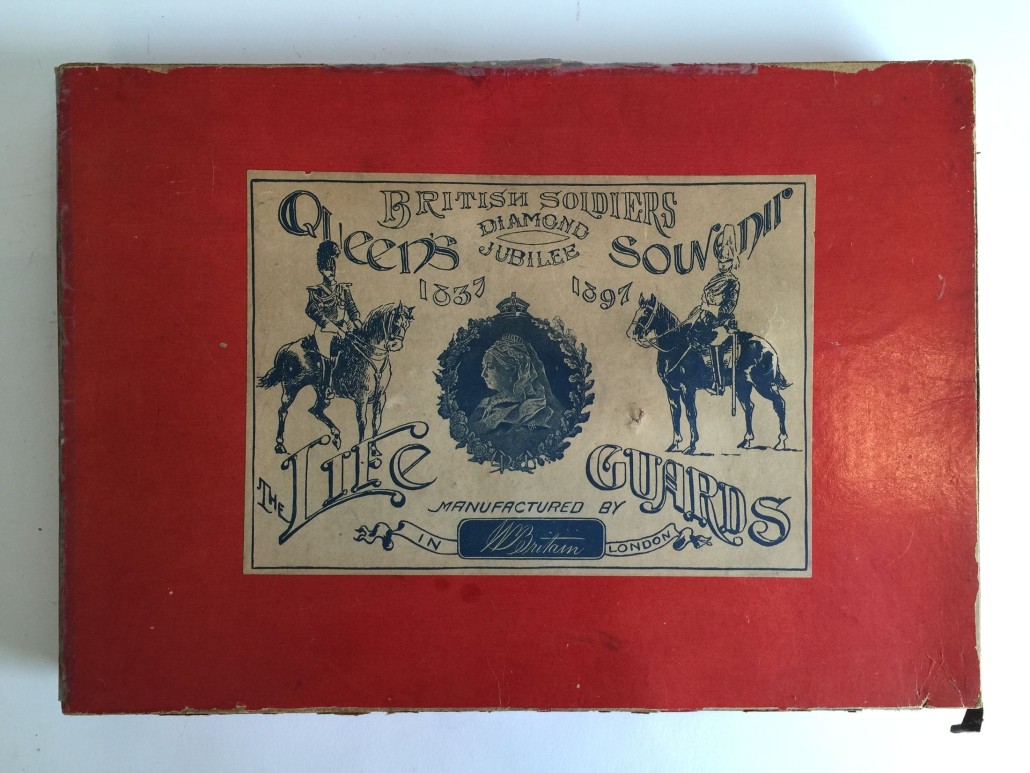 PITTSBURGH – Few other categories of antiques or collectibles attract as broad a demographic as toy soldiers. Amassing a collection of authentically detailed small-scale armies or setting up a colorful zoo or Old West town is a great leveler of ages, appealing equally to a small child or that child’s great-grandfather.

“It’s a pursuit that lasts a lifetime and never grows old,” said Ray Haradin, whose Old Toy Soldier Auctions will present to bidders worldwide one of the finest private holdings of military miniatures of the last 25 years on Saturday, October 17th: the James Cook collection.

The absentee and online auction with bidding through LiveAuctioneers is titled “Investment Rarities” as a tribute to Cook’s company, which trades in gold and silver coins and bullion under the name Investment Rarities Incorporated.

“Jim was an active buyer in the 1990s and was one of my customers. When he asked if we would handle the sale of his collection, there wasn’t the slightest doubt about the level of quality to expect,” said Haradin. “Jim always liked extreme rarity and condition and wanted only the highest-quality sets available. He always took the viewpoint of a collector, but because of his profession, it was also second nature for him to seek out the best investments.” Many of the soldier sets Cook acquired came with provenance from venerable old collections built by such knowledgeable hobbyists as Bill Miele, Ed Ruby and Tim Ilyinsky.

The Cook collection reflects its owner’s penchant for pre-World War I Britains, in particular the firm’s larger display sets.

“Britains traditionally priced their sets according to the number of pieces in each set,” Haradin explained. “The big display sets, by virtue of the number of pieces they contained, were expensive. Not that many were made because only the wealthy could afford them. Of the 100 sets in Jim’s collection, probably 16 are large display sets, and every one of them is special. You just don’t find sets of that type, complete with all of the right figures and in such nice condition.”

A display set was considered quite a prize in its day because it might consist of as many as eight or nine individual sets presented in one grand compendium. One of the most coveted of Cook’s display sets is a 1st version Britains Set #29 (shown below) incorporating Life Guards, the 3rd Hussards, 9th Royal Lancers, Royal West Surrey, and Mountain Mule Battery. Made around 1910, the set is complete with 41 original pieces and is the first such set Haradin has ever encountered in such a complete, pristine state. “In more than a century, it has never been played with,” Haradin observed. “That’s just unheard of.” 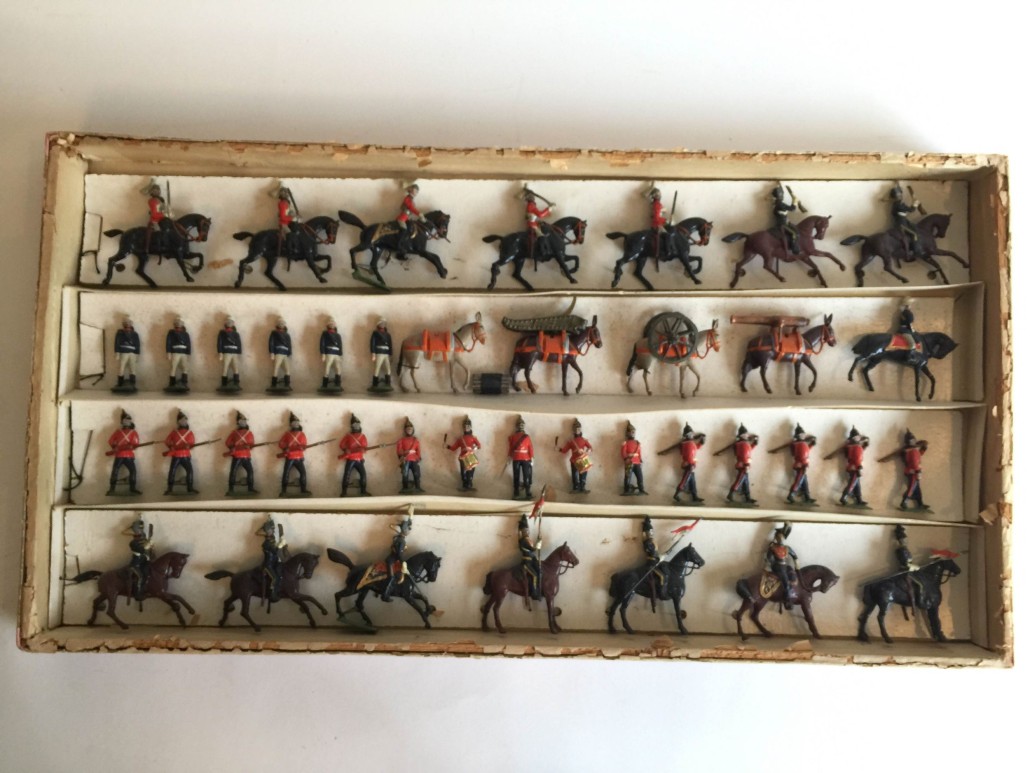 Cook’s assemblage also includes one of only two known original, boxed examples of Britains’ Boer War Army Service Supply, with supplies and escort. The box was designed for a fold-out presentation allowing the entire set to be viewed, while the sides of the box folds down to reveal the infantry. 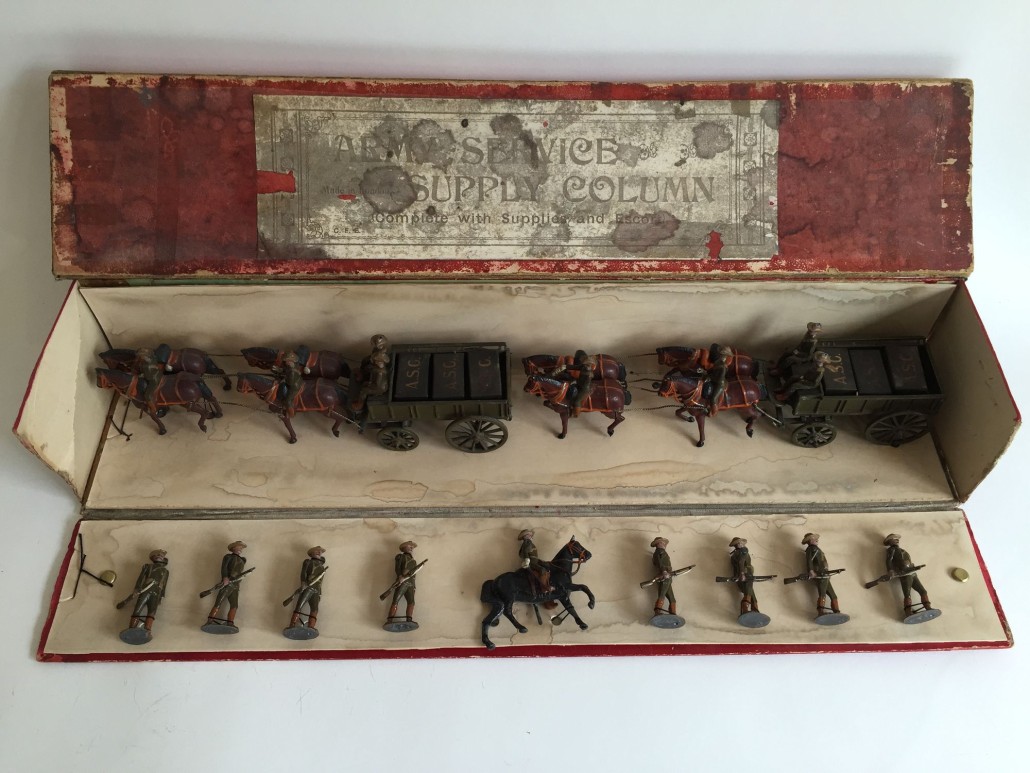 Another rarity, a Britains Set #72 First Life Guards Past and Present set, is housed in an 1897 Queen’s Diamond Jubilee box with Victoria’s image on the label. This desirable set shows how the Queen’s Guards looked in 1837 and 60 years later, in 1897.

The collection houses a small fleet of aircraft, including Britains’ circa-1930 civilian Autogiro Set #1392, with pilot, in near-mint condition in its attractively illustrated original box. “A civilian version of the Autogiro was used to deliver mail in the Philadelphia area prior to World War II. It was basically an airplane fuselage that, instead of wings, had blades that rotated from the push of an engine. Very unusual,” Haradin said. 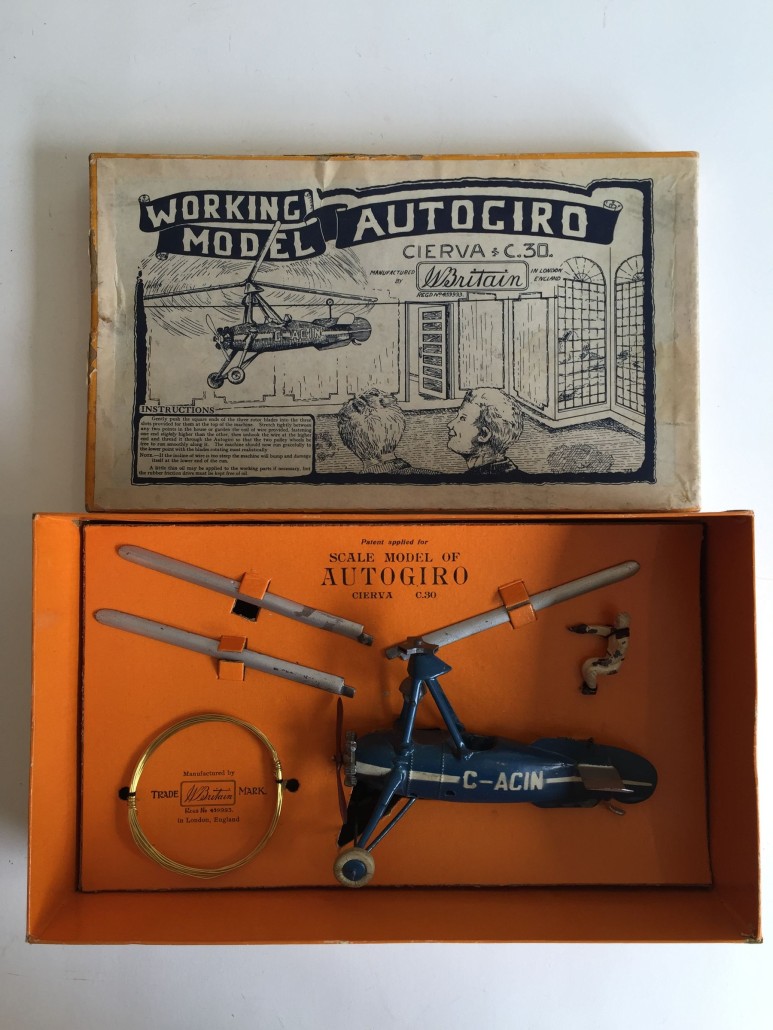 In addition to Britains, the James Cook collection features military figures from other respected manufacturers, as well as sets from the more-unusual civilian lines that have been produced over the years. Among the top civilian examples is Britains’ Famous Football Teams set replicating the Middlesbrough (England) team. It includes field players and the goaltender in red shirts and white shorts, plus the original ball, flags and goalposts. 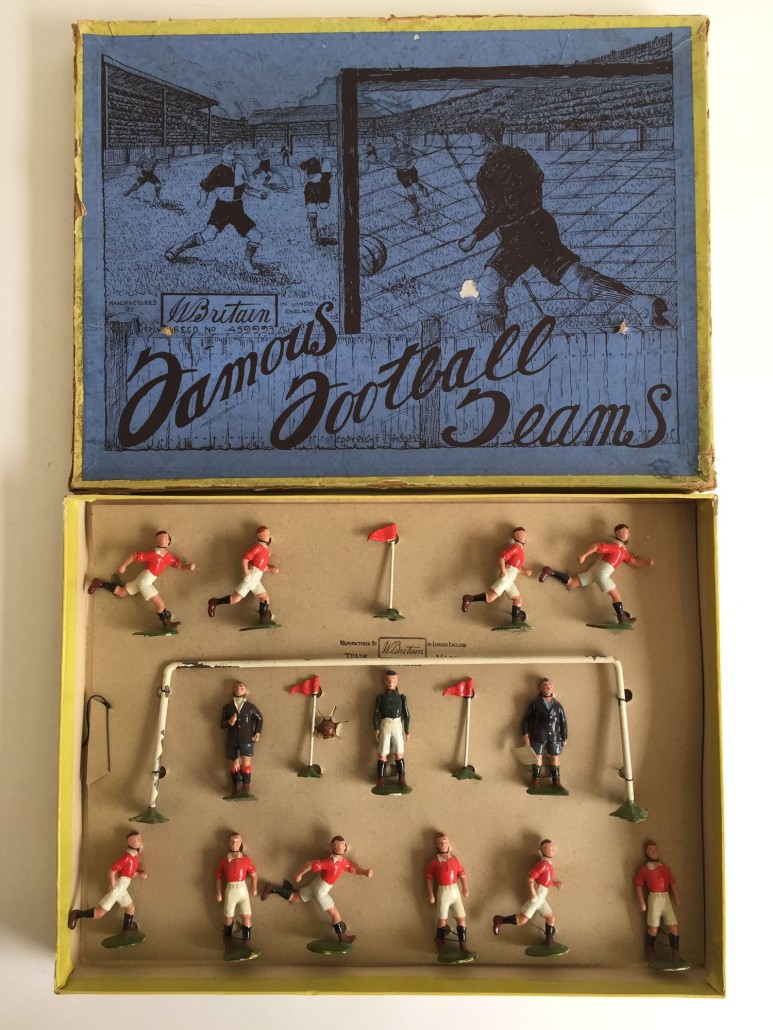 A rare Cherilea Spaceman set is as pristine as a collector could ever hope to find. The mint-condition figures and space helmets are still tied to the box as though they were fresh from the factory.

“This is a set that, in any condition, would ignite a bidding war at auction because robot and space toy collectors want it, too,” Haradin noted. 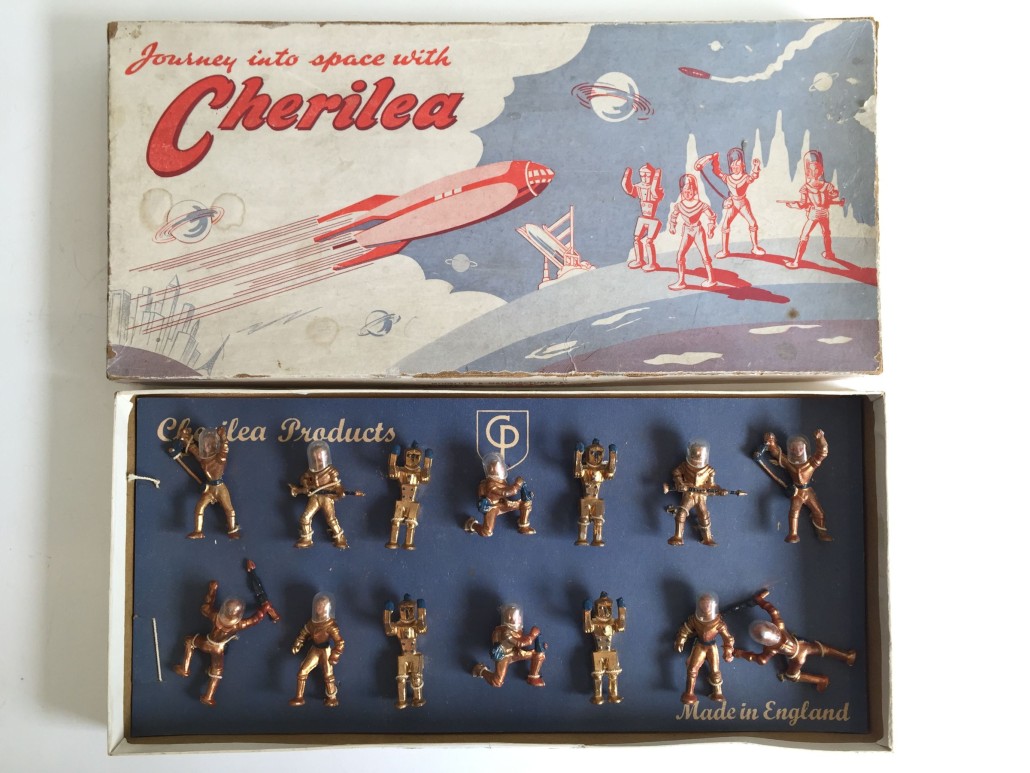 Johillco civilian productions include a large, late-1950s Pirate set (below left) with mint figures still tied to their original box positions, and the deluxe version of the Quo Vadis set (below right) issued to promote MGM’s 1951 Technicolor Roman epic of that name. The set, which has its movie studio label intact, contains two chariots with charioteers and an assortment of wild animals. 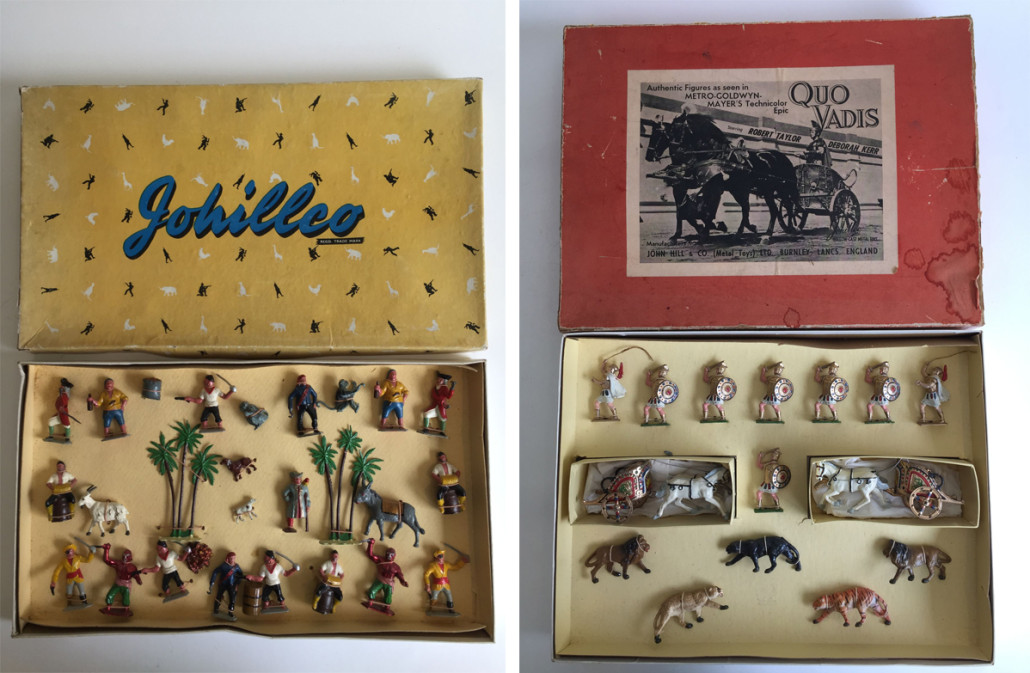 Other civilian sets expected to attract strong bidding include a wonderful Barrett & Sons Robin Hood and His Merry Men, all original in the box; and several cowboy and Indian Wild West-themed sets. The latter selection is led by a late-1950s Timpo Ranch set (shown below), mint with all pieces still tied to the interior of the beautifully graphic box. 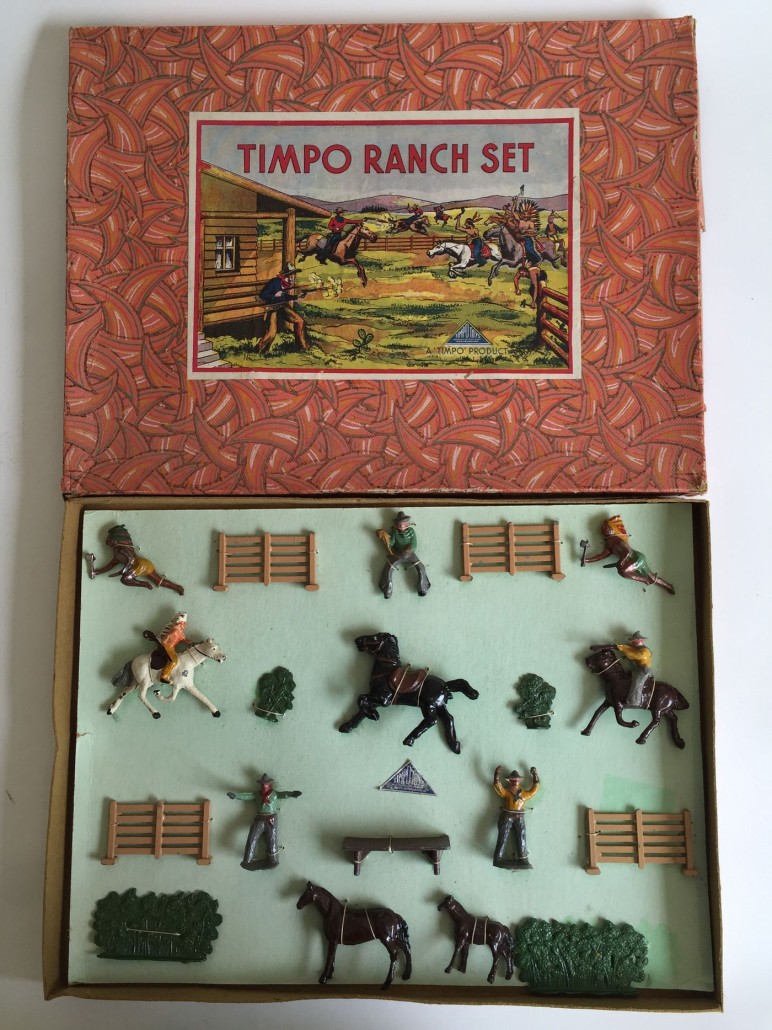 Also cataloged is a fine selection of American dime store soldiers. This popular specialty category refers to metal toy soldiers that were sold individually in five-and-dime stores from the 1930s through 1950s before plastic soldiers became the affordable option.

Old Toy Soldier’s Saturday, Oct. 17, 2015 single-owner auction of the James Cook collection will commence at 10 a.m. Eastern Time, with live online bidding through LiveAuctioneers. Absentee bids, including those placed online via LiveAuctioneers, must be made no later than 24 hours prior to the sale in order to be accepted.