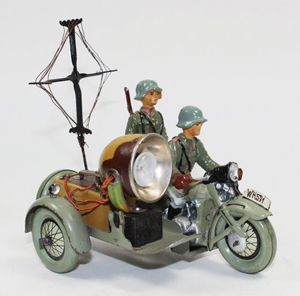 PITTSBURGH – Ray Haradin, owner of Old Toy Soldier Auctions, has something sweet in store for collectors June 21st, 22nd and 23rd. His big three-day auction event includes approximately 1,600 lots of choice soldiers and figures, commandeered by the estate collection of the late Paul A. Germain. Additionally, the auction features part II of the Dr. Arthur Puglisi collection and an extensive inventory of desirable contemporary productions

The auction is structured to accept absentee and live online bids through LiveAuctioneers.com. The start times will be 1 p.m. Eastern on Friday, June 21; and 10 a.m. on Saturday and Sunday, June 22 and 23.

Paul Germain was a well-respected attorney from Syracuse, New York who founded the Germain and Germain law firm. During his travels to some 128 countries, he amassed an enviable collection of postwar Britains, many of them old store stock in immaculate condition. He also favored King & Country figures and mid-1960s solid-cast productions by Nostalgia. The entire third day of the sale will be devoted exclusively to the Germain collection.

In line with Old Toy Soldier’s usual protocol, day one will serve as a showcase for soldiers, figures and other items of more modern production. In all, nearly 600 lots will be auctioned.

Eight fantastic Mignot dioramas from a New York City collection will take the spotlight in the opening session. Several were special orders from the manufacturer, Haradin said. Among the top entries are a 1980s-vintage Alpine diorama with Nordic ski troopers, presented in a three-tier display box; and a French Foreign Legion diorama.

Many desirable sets made by the British manufacturers Tradition and Trophy (including their Zulu Warriors) will be available to bidders, as well as examples from Marlborough Military Models’ Durbar Series.

Several very nice specialty collections will be featured on day two. One of the highlights is a boxed prewar Britains Exploding Trench (est. $3,000-$5,000), one of possibly three known examples. “The Exploding Trench is one of very few interactive sets that Britains made,” Haradin said. “It has a spring-loaded platform with a flag on the side. When it’s hit by a Britains cannon, a spring is tripped and causes the trench to ‘explode.’”

Two extremely rare, original paint sample cards from Britains’ archive are expected to reach $2,000-$3,000 apiece at auction. They originally came from the famous “Pink Room,” where Britains’ specialist painters would go to consult color cards and view the color schemes on correctly painted figures. Each of the two sample cards in Old Toy Soldier’s auction still has its appropriate painted figure tied to it.

Next up will be an outstanding assortment of Courtenay medieval figures, including a number of Tournament Knights in their original boxes (est. $600-$800), foot figures and a sampling of popular Greenhill/Courtenay figures.

“Richard Courtenay died in 1963. Fifteen years later, Peter and Gilly Greenhill bought the original Courtenay brass molds and revived the brand under the Greenhill name,” Haradin said. “Greenhill/Courtenay figures are high-quality productions that require patience and skill to create. They’re cast from leadless pewter, which gives them an especially realistic appearance. Collectors really go for them.”

Haradin went on to note that, in general, the most sought after of all Greenhill/Courtenay figures are the knights and medieval characters. “It’s a whole subsection of the toy soldier world, and if a collector is drawn to the history of the 15th to 17th centuries, most likely this is the brand they collect.”

Also included in the second day’s lineup are figures by Graham Farish (UK) and some very rare mounted figures by the French firm Vertunni.

From there, the auction marches into German territory. A highlight is a circa-1905 Spenkuch set of Frederick the Great’s Guards. The set is in virtually mint condition on its original tie card and is the rare variation that includes two black drummer boys. It is estimated at $3,000-$4,000.

Entertainment will be provided by a parade of amusing Heyde nodder bands from the 1920s. In each of the bands, bobble-headed musician figures are part of an affinity group. Examples in the sale include: rabbit band, cat band, monk band, barnyard band and black minstrels (est. $500-$700).

The military motor pool includes tinplate vehicles by Lineol and Hausser. A Hausser camouflage communications truck is entered in the sale with a $400-$600 estimate.

Comic character figures will follow, with top lots to include Felix the Cat, Flip the Frog and Rex the Lion (est. $500-$700), who was the mascot for the 1937 Coronation of England’s King George VI. The session will conclude with several hundred lots of unboxed Britains.

Day three will be devoted exclusively to the Paul A. Germain lifetime collection, which comes to auction directly from the Germain family.

The bidding action will begin with postwar Britains figures, including many rare examples from the 1960s.

“The sixties decade was a late period for lead figures in Britains’ overall production timeline. They were phasing out and making fewer of them, mostly for export,” said Haradin. “The 1966 Lead Safety Act ended the era of lead soldiers and ushered in the era of plastic soldiers, which were being produced in high quantities. Lead figures became more of a specialty item for Britains during the 1960s, which is why they are so scarce and desirable today.”

The auction continues with a selection of 80 English King and Country figures from the 1980s and ’90s, and will conclude with approximately 80 lots by Nostalgia Models, a British brand that produced its figures primarily for export.

“Nostalgia figures are on a low boil. People are quietly collecting them,” Haradin said. “They’re solid cast and you get a lot for your money. Many collectors find them appealing.”

For questions regarding any item in the sale, call Ray Haradin at 412-343-8733 (tollfree: 800-349-8009) or e-mail raytoys@aol.com. Additional sale details are available online at www.oldtoysoldierauctions.com.

View the fully illustrated electronic catalog and sign up to bid absentee or live online through www.LiveAuctioneers.com. 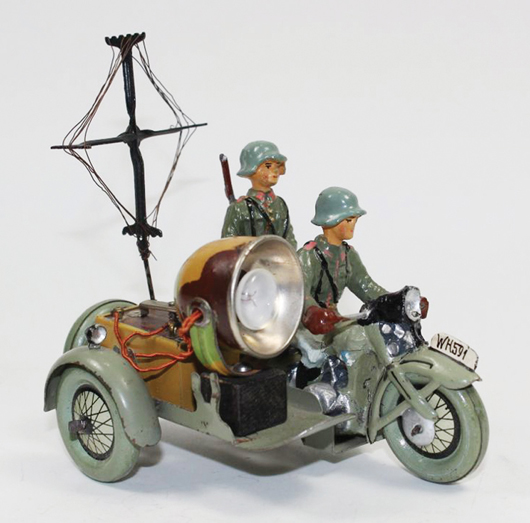 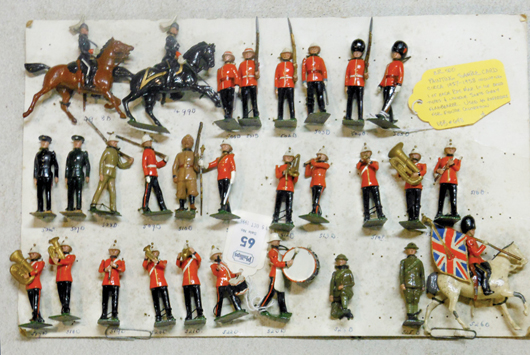 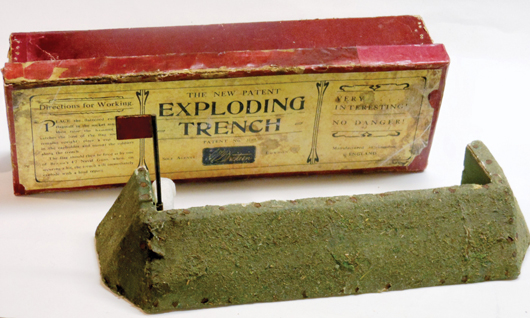 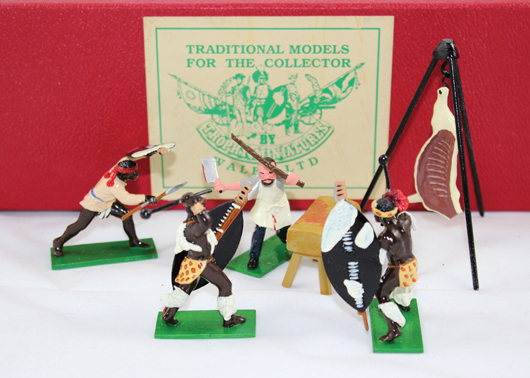 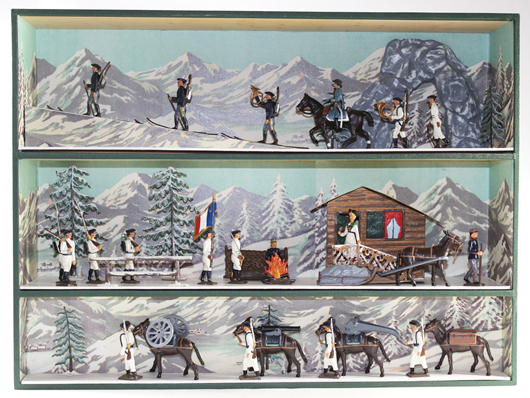 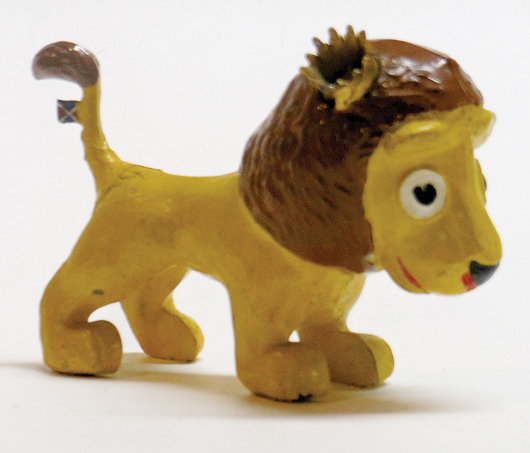 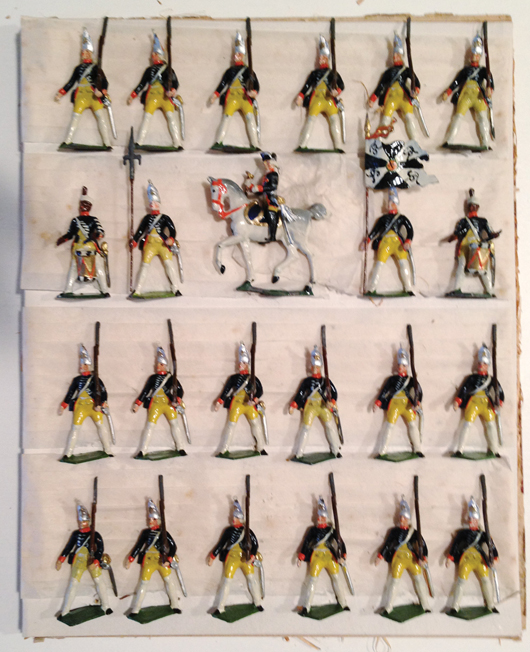 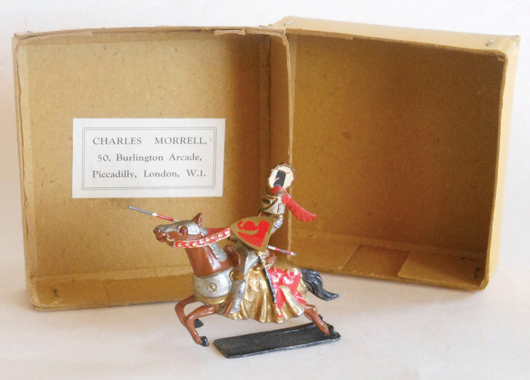 U. of Iowa to study options for new art museum