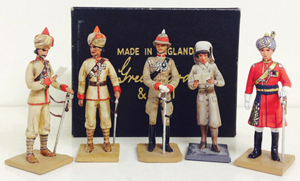 Selections from more than 30 Greenwood and Ball figures with estimates ranging from $100 to $1,000. Old Toy Soldier Auctions image

PITTSBURGH – Old Toy Soldier’s (OTSA) November 2013 auction grossed a record-setting $590,000 for the Pennsylvania-based company, but owner Ray Haradin thinks that record may soon be shattered. Over the weekend of June 27-29, OTSA will present the James A. Henderson collection as the featured highlight of its approximately 1,500-lot auction – an assemblage of soldiers that Haradin describes as “the most exciting collection [he has] handled to date.” LiveAuctioneers will provide the Internet live bidding services for the sale.

One of America’s top executives, Henderson retired from Cummins Engine Co. Inc. after a distinguished 35-year career that took him to the pinnacle of success. He held senior leadership positions at Cummins beginning in 1977, when he was appointed president and chief operating officer. Eventually he rose to the ranks of chairman and CEO. In his free time, Henderson avidly collected Britains – the best of the best.

“James Henderson has always appreciated provenance, and his collection is filled with rarities formerly in the collections of His Royal Highness The Duke of Gloucester, Britains’ Archive, Malcolm Forbes and Ed Ruby,” said Haradin. “He started collecting in the early 1980s and was very active through the turn of the 21st century, with an emphasis on buying from ‘name’ collections.”

The Henderson collection will be the exclusive focus of the Saturday, June 28 session. Two of the top entries are a Britains set No. 6, the Royal Scots Greys (est. $12,000-$15,000); and set No. 7, the Royal Fusiliers ($7,000-$9,000). Both sets are complete, carry provenance from the Ed Ruby collection, and are featured on the cover of James Opie’s The Great Book of Britains.

“These two sets are, arguably, the most desirable sets Britains ever made. They were a Germanic style of larger-scale, hollow-cast figures that Britains only produced between 1893 and 1897. Very few figures have survived from the production runs of these two sets, so to find either set in a complete state is almost unheard of,” said Haradin.

The figures from sets No. 6 and 7 have plugged-in arms that are attached by an interior rod. Because the arms were separately cast, Britains could adapt them to hold a rifle or trumpet. After a brief five-year run, this particular type of arm was replaced by a moveable arm, Haradin said.

Another special treat in the Henderson collection is the selection of extremely rare and desirable Britains Paris Office sets. Produced for only a short time starting in 1905, figures from Britains’ French subsidiary are identifiable primarily by their paint style, but many are marked “Depose,” Haradin said. “After the Paris branch closed, the molds were sent to Britains’ headquarters in England, so the only sure way to identify the Paris productions is by the paintwork, which is quite distinctive.”

Also in the Henderson collection are a number of special-order pieces that were painted per the customer’s request at Britains’ factory. Among the rare, commissioned items to be auctioned is a Scots Guard Pipe Band set, which was formerly the property of The Duke of Gloucester and is estimated at $9,000-$12,000 in the upcoming sale.

Previously part of the Ed Ruby collection, several Britains displays were made especially for the Clyde Model Dockyard, a famous and historical toy and model shop in Glasgow, Scotland, that opened in 1789 and operated through the early 1970s. The displays have a tin base to which mounted figures were affixed. The displays could be rolled through the store via tracks attached beneath their platforms, thus rendering the impression of soldiers marching. There are eight such displays, with estimates ranging from $1,500 to $7,000.

A one-of-a-kind vehicle in the Henderson collection is Britains’ Terrain Terrier. Haradin said the toy is listed in Britains’ records but that he has never seen one before. Basically a Bren gun mounted on wheels, the boxed example in OTSA’s sale is expected to make $3,000-$5,000.

In addition to many “offbeat” productions, the Henderson collection includes a vast array of other rare sets, including a boxed Royal Marine Infantry Band – one of the two most coveted Britains bands – est. $12,000-$15,000. Another gem, ex Malcolm Forbes collection, is a Pestana river gunboat accompanied by three small skiffs, est. $2,500-$3,500. The Saturday session is rounded out with many beautiful soldiers by Lucotte, Heyde, Stadden and Mignot, from unusual vintage pieces to those of newer manufacture.

The Friday and Sunday sessions will be brimming with soldiers for collectors at all different buying levels. Day 1 includes a fine, 550-lot assortment of post-1970 productions. Sets range from $50 to $500 and include productions from such makers as Trophy, Somerset, Mignot, King & Country, Hocker, All the Queen’s Men, Imperial and Ducal. Also in the mix are American Dimestore soldiers.

Day 3 will present collectors with a panoramic battlefield of toy soldiers dating from 1895 to about 1960. In addition to Britains, there will be a number of Mignots, Greenwood & Ball figures, and some very nice heraldic knights, both by Courtenay and the later and also highly sought-after brand Peter Greenhill/Courtenay. Around 40 Courtenay knights in the sale are from a premier collection that OTSA will be apportioning into its auctions over a period of time.

Haradin also noted that Peter Greenhill, a highly respected painter who owns the old Courtenay molds, has entered into an arrangement with OTSA to produce and paint figures that will be available only through Old Toy Soldier’s auctions, starting with the June 27-29 sale.

Old Toy Soldier’s June 27-29 auction will commence at 1 p.m. Eastern Time on Friday, June 27, and 10 a.m. on Saturday and Sunday, June 28 and 29. Absentee bids, including those placed online via www.LiveAuctioneers.com, must be made no later than 24 hours prior to the sale in order to be accepted. 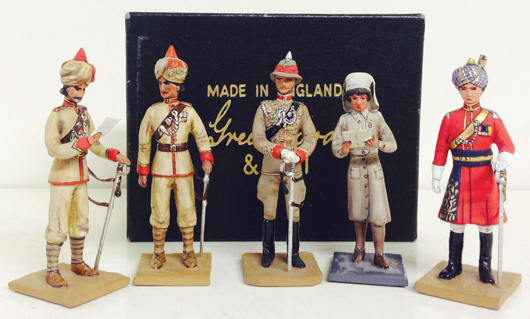 Selections from more than 30 Greenwood and Ball figures with estimates ranging from $100 to $1,000. Old Toy Soldier Auctions image 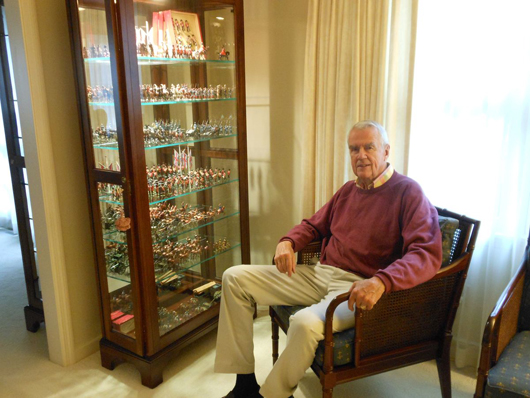 James A. Henderson, retired chairman and CEO of Cummins Engine Co. Inc., at home with prized pieces from his collection displayed in a showcase. Old Toy Soldier Auctions image

Five of eight Clyde Model Dockyard displays that will be sold as separate lots with estimates ranging from $1,500 to $7,000 each. Old Toy Soldier Auctions image 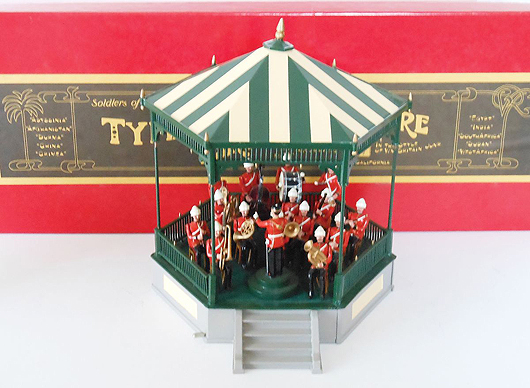 Hocker Band Stand, one of many newer production sets to be sold in the June 27th session. Old Toy Soldier Auctions image 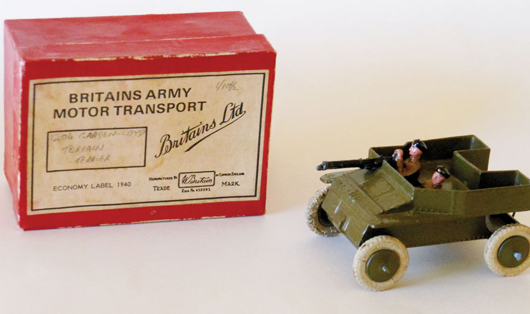