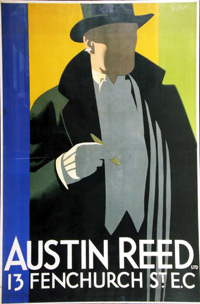 The collection numbers some 20 designs that were for many years displayed in the firm’s flagship clothing store in London’s Regent Street. Saleroom estimates range from $1,000 for an original design to $7,000 for one of the finest posters. The Austin Reed collection will be sold together with 200 lots of other vintage posters.

Tom Purvis’ posters are some of the most sought after by collectors in the United States and Great Britain. In 1990, Onslows auctioned the remaining contents of his studio. The sale set new records, with the beautiful London and North Eastern Railway’s Umbrella Girl poster selling for a record $7,700. Although Purvis had died in 1959, his widow Jane had kept his posters, drawings and paint brushes intact in his Oxfordshire studio.

In his day, the professionals who commissioned work from Purvis regarded him as the supreme British master of poster art between the wars. He was known as “the king of the hoardings (billboards).”

Tom Purvis was born in Bristol on June 12, 1888, the son of a Master Mariner later to become a maritime artist. Purvis assisted his father in preparing paints. The family was not wealthy, but his father financed a first term at Camberwell School of Art for his son. Through scholarships, the younger Purvis was able to stay the course. He later studied under Sickert in London and Degas in Paris

The story goes that one day Sickert seized Purvis’s eraser and hurled it through a skylight telling him “bloody well draw.” Later, Purvis learned the trade with six years at the advertising agency Mather & Crowther, followed by a stint at the Avenue Press, where he learned about lithography.

His first independent poster was for Dewar’s Whisky in 1907, when he only 19 years old. He served with the Artist’s Rifles in World War I, which left him not the healthy man he had been before the war.

Purvis designed many posters for the war effort as well as covers for London Magazine. His Edwards’ Soup poster “They’re All In It!” led to further commissions. He was gradually developing his distinctive style of flat areas of brilliant colors laid next to each other without a dividing line.

The finest designs he did are among those for Austin Reed, the London and North Eastern Railway, and Shell Oil. He was now a very successful poster designer adopting a business-like attitude and charging up to $350 for a design.

In all his work Purvis was insistent on the closest co-operation with the client
before a drawing was started. He would talk over the client’s problem with extreme care and thoroughness, and then patiently search for the best method of illustrating the “personality of the product” and the purpose of the campaign.

An article in a 1929 issue of Commercial Art, W.D.H. McCullough, advertising manager for Austin Reed, said: “In whatever class the work is being used, it is the Austin Reed policy only to use the best obtainable. Probably the height of superb simplicity in modern men’s wear artwork is attained by the Underground posters by Tom Purvis. These are specially designed for the artificial light and form an almost perfect expression of the fundamentals of the artistic policy of the firm.”

John Gloag, a director of the advertising agency Pritchard Wood & Partners, described Wood as “a likeable, jovial and most accomplished artist with no-nonsense approach. He deservedly made a lot of money from his work, especially as he alone produced nearly all the ideas for his posters.”

Tom Purvis brought respectability to commercial art. He once said, “I loathe the word ‘artist.’ Personally, I am proud of being called a Master Craftsman.”

In 1930 he was amongst a group of artists who banded together to form the Society of Industrial Artists, which brought pressure on the industry to improve standards for training and employment for commercial artists. He was one of the first Royal Designers for Industry in 1936, elected Master of the RDI in 1939.

During World War II he was an official artist for the Ministry of Supply and firms including Rolls-Royce. He would often return home from the factories black after sketching workers. His famous 1940 wartime design for the National Savings poster “Lend to defend his right to be free” featured his son John, age 10.

After the war he only did designs for Blackpool Pleasure Beach and another for what had now become British Railways. But it seems that in the postwar austerity his colorful and provocative posters had no place and were no longer in demand.

Now a Roman Catholic, Purvis turned to painting portraits and religious subjects. He was never content thinking he could have done better. Money had no real meaning to him, he was one of quiet generosity. It was said of him that having received a payment for a commission in the morning, by lunchtime he had given it all away.

Tom Purvis died almost forgotten in August 1959, and is buried at Buckfast Abbey in Devon. Burt Thomas his old friend and fellow artist of great repute wrote of his art: “His posters were the finest that ever appeared on the hoardings. They were real posters, not just showcards enlarged as most posters were in those days. One could take them in at a glance while passing on a bus, which is the test of a good poster.”

Onslows Auctioneers was founded in 1984 by two former employees of Christie’s who have extensive experience in all types of British posters, including travel, advertising and war propaganda related. The firm’s auctions are held semiannually at the Design Centre, Chelsea Harbour, with real-time Internet bidding through LiveAuctioneers.com.

View the fully illustrated catalog and sign up to leave absentee bids or to bid live via the Internet at www.LiveAuctioneers.com. Visit Onslow’s Web site for additional information on the upcoming auction at www.onslows.co.uk. 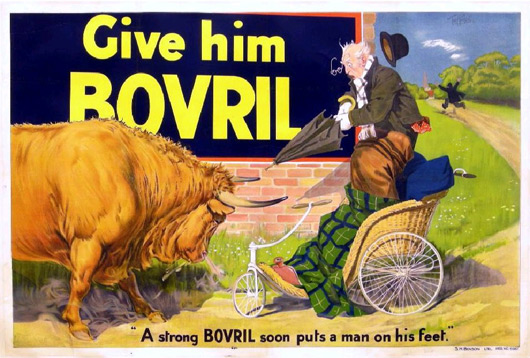 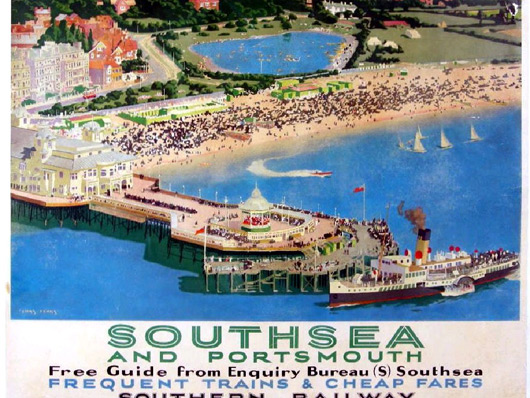 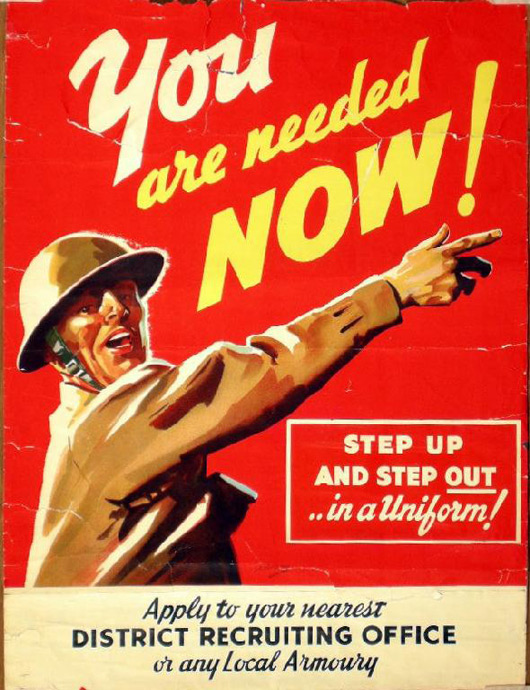 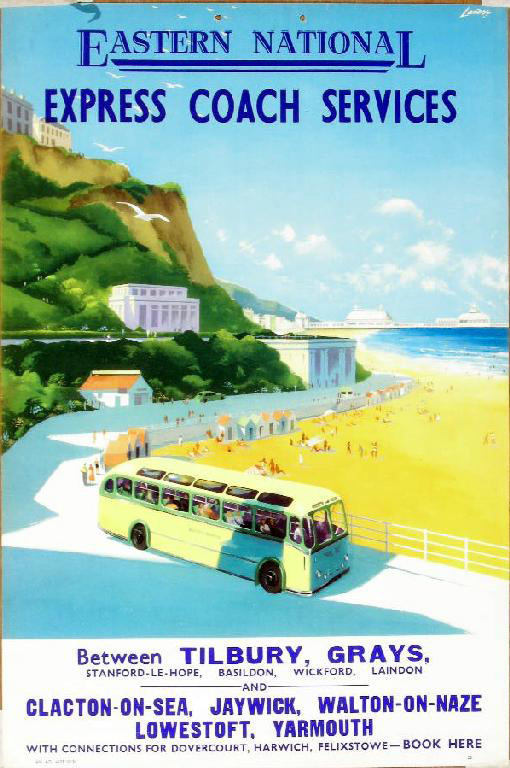 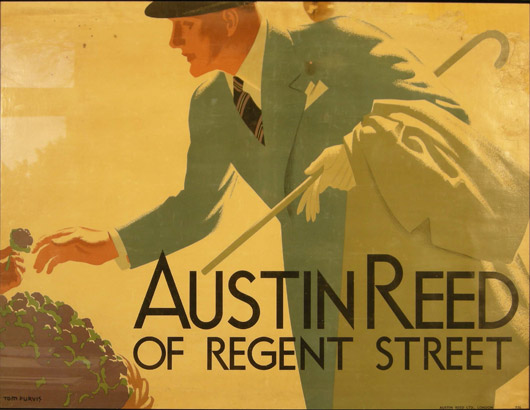 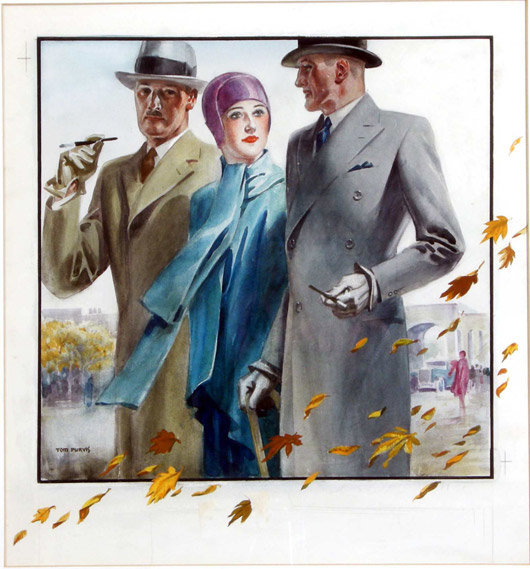 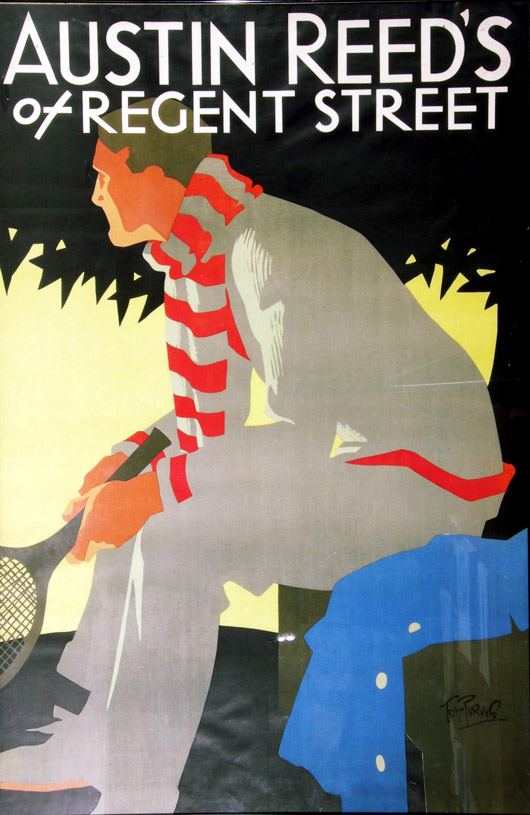