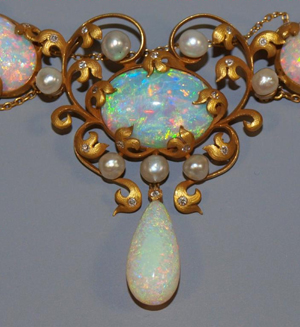 AUSTIN, Texas – A superb circa-1900 gold necklace laden with 45 carats of fine Australian fire opals, diamonds and freshwater pearls – said to have been the property of legendary interior designer Elsie de Wolfe – leads an exceptional lineup of fine and decorative art and furniture to be sold April 18 at Austin Auction Gallery, with Internet live bidding provided by LiveAuctioneers.com. The crown jewel of the company’s 430-lot Important Spring Estates Auction was purchased by the consignor in 1976, at an antiques show in Hillsborough, California. At that time, it was represented as having been de Wolfe’s personal jewelry.

“While we cannot prove that the necklace belonged to Ms. De Wolfe, it certainly exhibits the quality that a woman of her social position would have demanded,” said Ross Featherston, president of Austin Auction Gallery. Elsie de Wolfe (1865-1950) was America’s first interior decorator to the rich and famous. Her high-profile clients included The Duke and Duchess of Windsor, as well as members of the Vanderbilt, Morgan and Frick families in New York. Aside from her success as a designer, de Wolfe was, herself, a pillar of high society. Upon her marriage to British diplomat Sir Charles Mendl, she became better known as “Lady Mendl.”

The English Art Nouveau necklace attributed to the collection of Lady Mendl, which will be offered in Austin Auction Gallery’s April sale with an opening bid of $30,000, was featured in an episode of Leigh and Leslie Keno’s television show Find! The Keno brothers felt the necklace was so exceptional – with or without the de Wolfe attribution – that they called in jewelry expert Peter Shemonsky for a specialist appraisal. Shemonsky shone a light on the opals, each of which revealed the fiery-red flash seen only in Australian opals. Summarizing his opinion, Shemonsky stated that the necklace of 23 opals, 52 diamonds and 19 freshwater pearls was “unique” and would be “very difficult” to replace. He assigned an insurance value of $60,000-$80,000 on the necklace. (View the video of the actual TV appraisal at the end of this article.)

Another rarity to be auctioned is an early Paul Evans (American, 1931-1987) 10-piece sculpted-bronze dining suite comprised of a large ‘Stalagmite’ glass-top table, eight chairs upholstered in purple micro-suede, and a long, sculpted-bronze server set with two slate slabs. The consignor purchased the suite in 1970 in Chicago, from the Directional Showroom. The set will be offered in three lots with a total estimate of $17,000-$23,000.

An avant-garde 1985 Art Deco-style television cabinet created by the celebrated New York designer Dakota Jackson is made of cherry-finished mahogany and bird’s-eye maple, accented by eau de nil trim and interior. Standing 60 inches tall, its trapezoidal shape and precision-matched wood grains are a perfect blend of edgy style and time-honored quality of construction. It is expected to realize $3,000-$5,000.

The more-traditional furnishings in the sale include a monumental 99-inch-tall French carved-oak chateau cabinet with elaborate relief carving and distinguished provenance from the Chateau de Caen, Normandy, France ($8,000-$12,000); a large four-door bookcase from northern Spain, and a mid-19th century English cellaret of oak and burlwood with Black Forest-style carved leaf-and-grape motif ($4,000-$6,000).

The fine art section of the sale includes a special collection of 11 artworks by John Strevens (British, 1902-1990). Strevens exhibited regularly at the British Royal Academy, Royal Society of British Arts, the Royal Society of Portrait Painters, and the Paris Salon. The paintings were collected and consigned by a single source. “The owner of the paintings had her portrait painted by Strevens and bought additional works by the artist,” Featherston explained. “Strevens is known for his Impressionist style and portraits. The collection includes several large paintings, with one titled Evening Party that measures 40 inches by 50 inches (sight). It is estimated at $4,000 to $6,000.”

Additionally, the auction will include antiques from a number of quality estates. Among the offerings are American coin and sterling silver flatware, marble garden statuary, Japanese and Chinese ivories and porcelain; Confederate Civil War letters and slave receipts; an 18K gold, platinum and diamond ring accompanied by a GIA report (diamond is ‘F’ in color, VVS1 clarity); and a selection of couture ensembles and evening gowns by such designers as Halston, Oscar de la Renta, Richilene and others. A circa-1860 Spanish carved Madonna with glass eyes and serene expression, 53½ inches tall, carries a presale estimate of $2,000-$4,000.

All forms of bidding will be available for the April 18 auction, including live via the Internet through LiveAuctioneers.com. For additional information on any lot in the sale, call 512-258-5479 or e-mail info@austinauction.com.


Click to view a video of the actual discovery and appraisal of the opal, diamond and pearl necklace that may have belonged to turn of the 20th century interior design queen Elsie de Wolfe, also known as Lady Mendl. 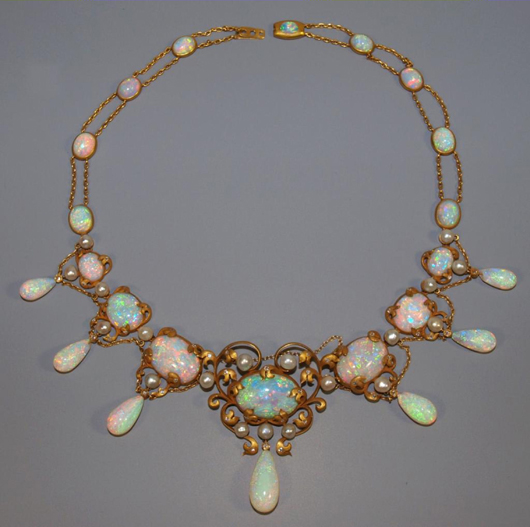 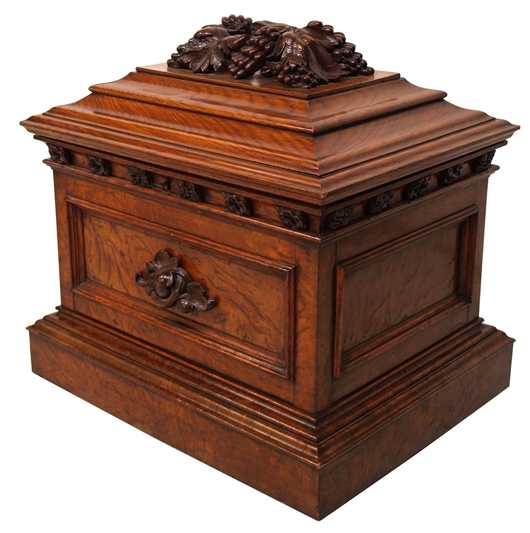 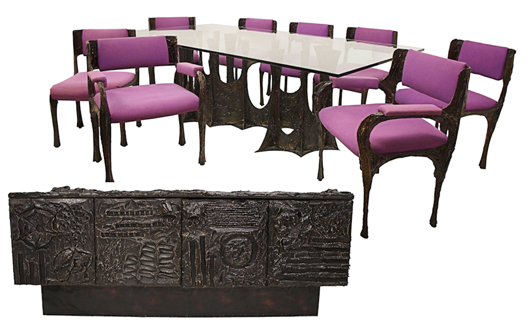 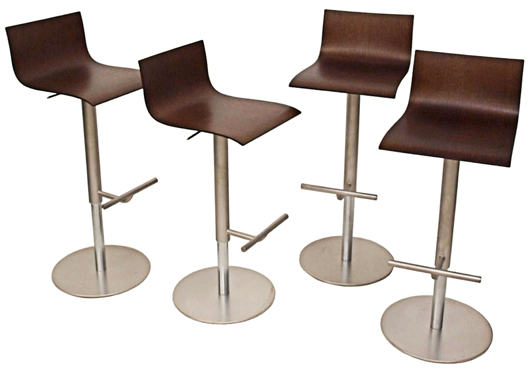 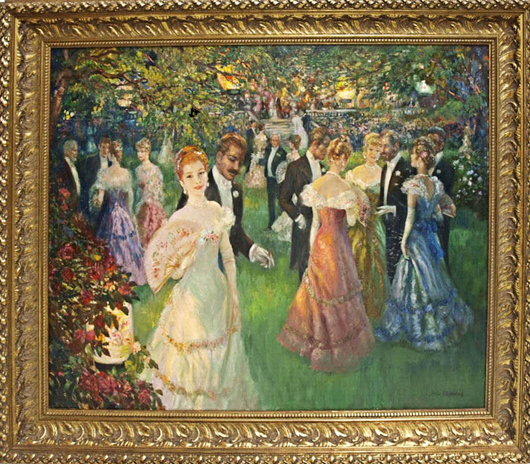 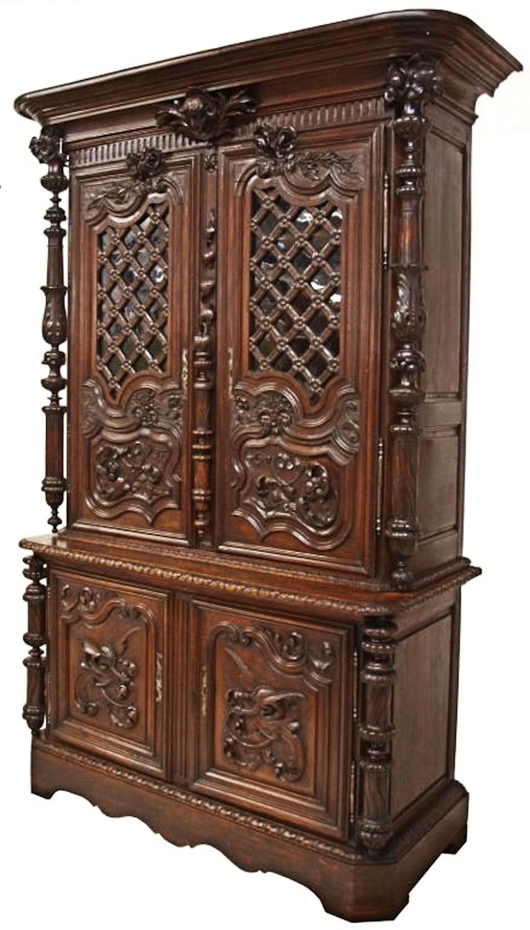 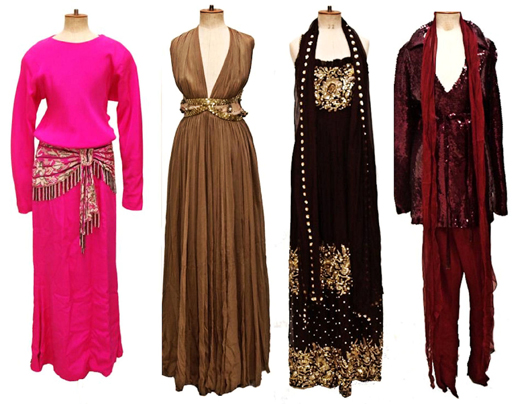 A selection of couture ensembles and evening gowns will be offered, including designs by Halston, Oscar De La Renta, Richilene and others. Image courtesy of Austin Auction Gallery. 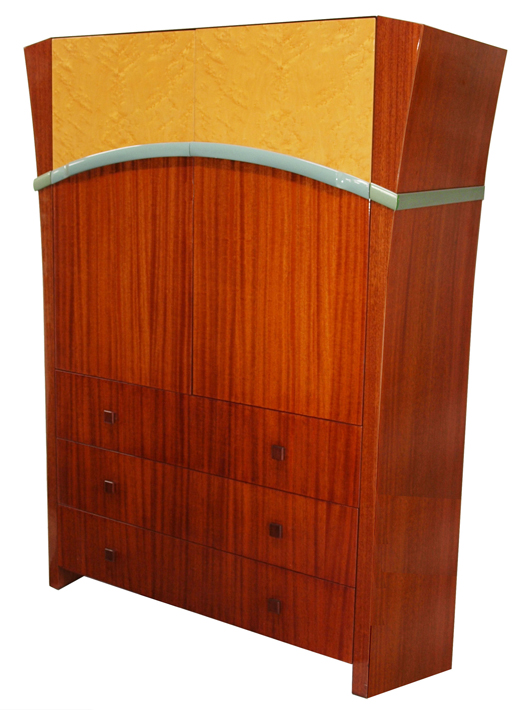