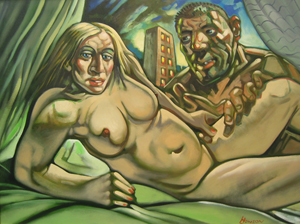 GLASGOW, SCOTLAND (ACNI) – Madonna has never been shy about revealing herself to the world, but artist Peter Howson’s oil-on-canvas interpretation of the “material girl” and filmmaker ex-husband Guy Ritchie presents a controversial alternative view of the celebrity couple. Criticized by some for its unflattering depiction of the svelte entertainer – one critic describing it as “Neanderthal” in appearance – the impressionistic painting has vaulted into the public spotlight with the announcement that it is to be auctioned on Saturday, May 30, at McTear’s Auctioneers in Glasgow.

The painting titled Madonna and Guy was completed around 2005 and most recently was held in a private collection in Scotland. Although experts anticipate it will fetch between $24,000-$35,000, many observers believe it could go much higher.

“There is no doubt that the recent split of Madonna and Guy has generated increased interest in the painting,” said Brian Clements of McTear’s Auctioneers. “The painting created a huge amount of controversy when it was unveiled a few years ago, and I think it’s safe to say it is one of a kind.”

The artwork is an oil on canvas and measures 35 inches by 47¼ inches. It is unclear whether or not the onetime couple actually posed for the painting.

Artist Peter Howson is a favorite in the rock-music world. His paintings are in the collections of David Bowie, Mick Jagger and even Madonna herself.

Howson incurred his share of criticism for the unflattering portrait he painted of Queen Elizabeth II. Reportedly, the picture met with Her Majesty’s disapproval after it was used on a postage stamp in 1998.

For additional information on the auction, visit www.mctears.co.uk.

The Imperial War Museum and Times newspaper appointed Howson official British War Artist for Bosnia in the spring of 1993. He made two visits to the country in June and December of that year, traveling with the British forces participating in the United Nations Protection Force. In June he went to Travnik, Gornji Vakuf, Prozor and Vitez, but was forced to return early because of illness. During this visit he was under the scrutiny of a BBC television crew for a Forty Minutes documentary titled “War Artist.”