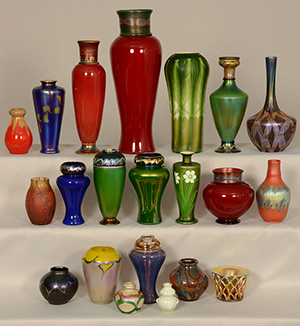 WICHITA, Kan. – Fresh from the first of a planned five-part series of auctions to liquidate the lifetime collection of mostly porcelain and fine art glass gathered over the course of five decades by the late Dr. Ernest Rieger and his wife, Karin, Woody Auction will now turn its attention to the Part 2 sale, to be held Thursday, May 29, at the Double Tree (Airport Hilton) in Wichita.

Part 1 was a huge success, as 400 lots came up for bid in an auction that grossed $1.3 million – and that represented only a fraction of the Riegers’ collection overall (plus the couple’s period antique furniture items, which were displayed in their Wichita home and will be sold at Parts 3 Aug. 1-2) and 4 (date to be determined). Part 2, starting at 1 p.m. Central, will feature 432 lots.

The Riegers were discerning, serious collectors, seeking out only the finest names in porcelain and glass, such as Tiffany, Galle, Meissen, Webb, Daum Nancy, KPM and others. “This is by far the finest antique collection we’ve ever offered, and it might be the finest ever offered in the state of Kansas,” Woody said. “All items will be sold to the highest bidder, without reserve.”

Thomas Webb & Sons was founded in England in 1842. It was known for the high quality of its cameo glass. Examples in the sale will include a finely carved cameo art glass vase signed “G. Woodall 1887,” a cameo art glass vase also signed by G. Woodall showing a young woman and a bird, and a 21-inch gem cameo vase signed by Tiffany & Co. and Thomas Webb.

Emile Galle (1846-1904) was a founder of the French Art Nouveau movement and a master glass designer. Galle pieces in the auction will feature an 18-inch signed French cameo art glass vase, dark green, with a forest and insect décor and a Victor Hugo quote around the base; and a signed French cameo appliqué and marquetry two-handle bowl having a clear and amber background.

Other Daum Nancy pieces will include a 10-inch figural bronze lamp base with a figural young girl in a dress holding a lantern, artist signed “Leo Laporte-Glaizsy”; a 6-inch signed four-color French cameo art glass pedestal vase having a carved vintage décor with spider web background; and an 11-inch French cameo art glass blown-mold vase with a blue and black dark forest décor.

Mount Washington, the art glass factory founded in Massachusetts in the 19th century, will also be represented in the auction. Pieces will include a 22 1/2-inch Royal Flemish kerosene lamp with figural cherub metal base and camel scene decoration; a 12 1/2-inch decorated “Monkey” vase with rare monkey and ape décor; and an 8 1/2-inch glossy Burmese lyre stem candlestick holder.

Fans of French cameo art glass will be impressed by a pair of vases, both signed “Muller Freres Luneville” (one 14-inch, white and yellow with dark brown winter scene showing wild boars, the other 13 inches, with an Asian-style scenic “windows” décor featuring cranes, lake scenes and Geishas). Also sold will be a magnificent 25 1/2-inch-by-20-inch KPM porcelain plaque, artist-signed (“Pfeiffer”) and showing a detailed scene titled “The Sacrifice of Jephthah’s Daughter.” 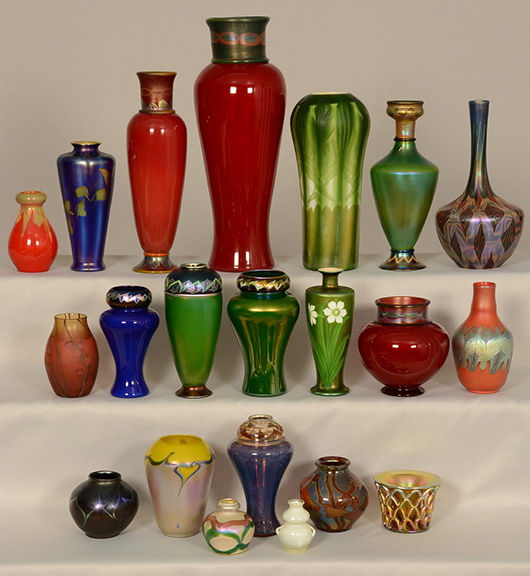 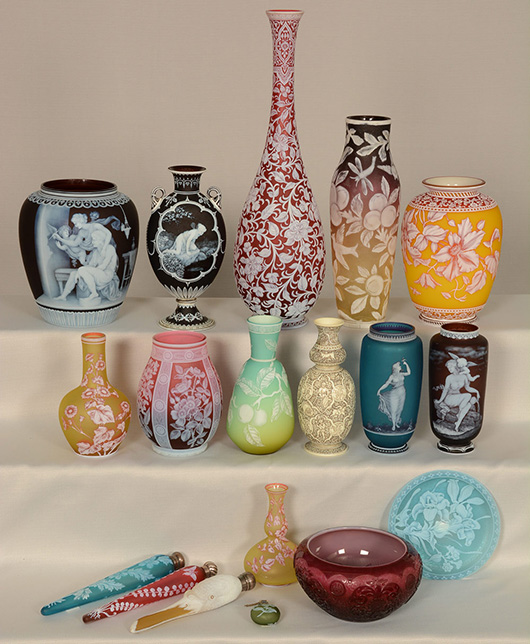 Much of the English cameo in the sale was purchased by the Riegers while on trips to Europe. Woody Auction image.

French cameo glass pieces, like these shown, will be sold without reserve. Woody Auction image. 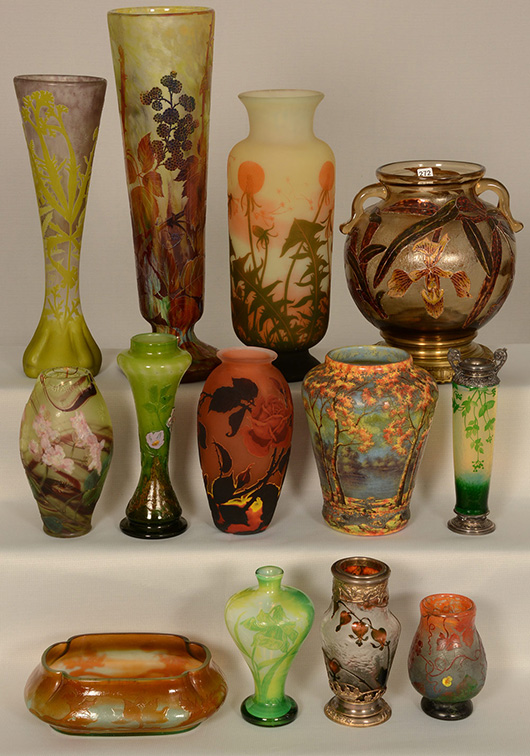 Fans of French cameo glass will be interested with the selection and variety in the auction. Woody Auction image. 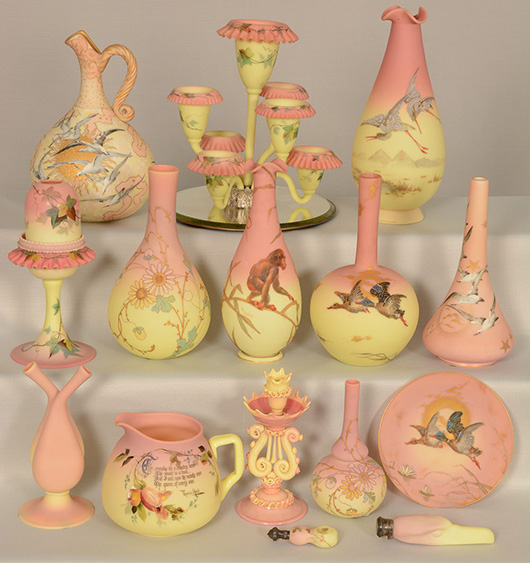 The Riegers collected Burmese pieces such as these, all of which will come up for bid. Woody Auction image.