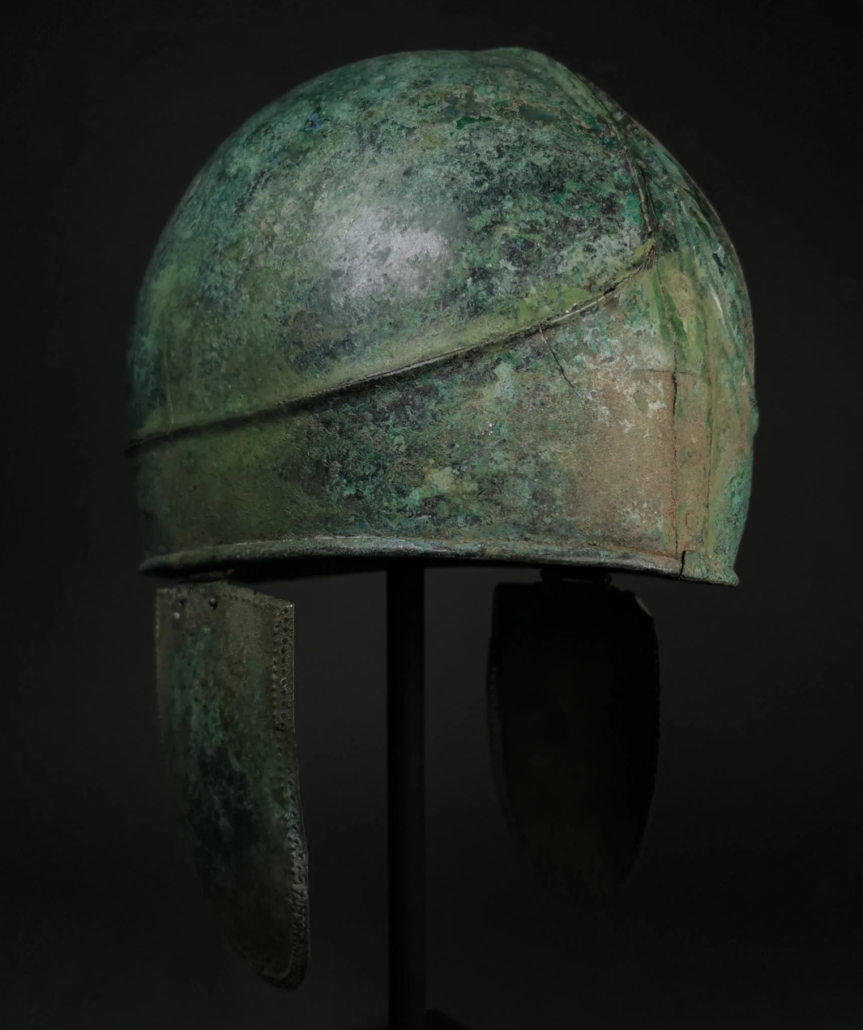 LONDON – On June 20-21, Pax Romana, the acclaimed London antiquities gallery and boutique auction house headed by Dr. Ivan Bonchev (PhD, University of Oxford), will present The King’s Sale. Traditionally a favorite with its international clientele, the blue-chip event with a royal theme is specifically focused on ancient objects that symbolize the wealth and power vested in reigning monarchs. Absentee and live online bidding will be available through LiveAuctioneers. All lots are offered with no reserve and will be sold to the highest bidder at or above the starting price.

“Our King’s Sale features a superb selection of museum-quality pieces, with representations from all around the ancient world, from the Middle East through the Mediterranean to the North Sea,” Dr Bonchev said. “We are very pleased to offer an exclusive array of arms and armor, rare coins, and some of the most stunning and unique jewelry ever to pass through our gallery doors.” 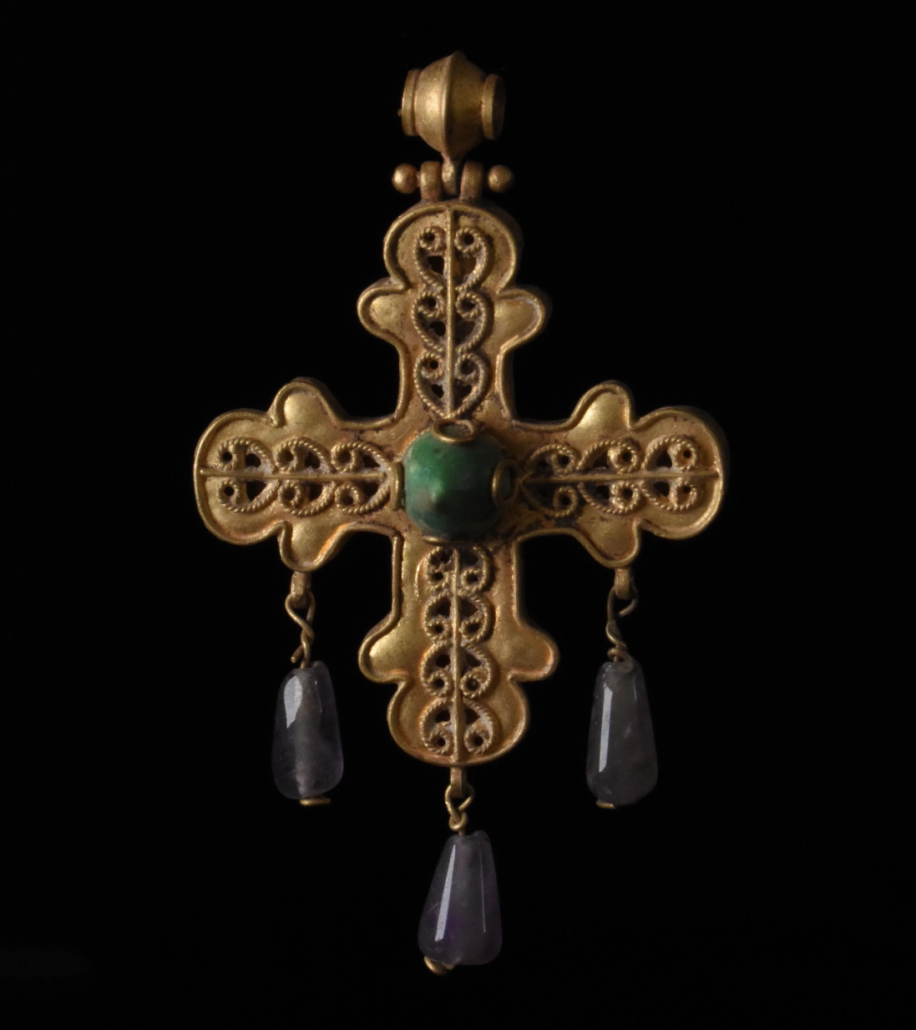 The Saturday, June 20 session of 446 lots is devoted to high-grade gold, bronze and silver coins with a timeline that runs from Ancient Greece through Medieval Britain. Among the famous figures depicted on the coins are: Alexander the Great, Phillip II of Macedon, Julius Caesar, Tiberius, Trajan, Vespasian, Pertinax, Constantine the Great, Wulfred, and Harold I. Additionally, some coins carry images of ancient cities. 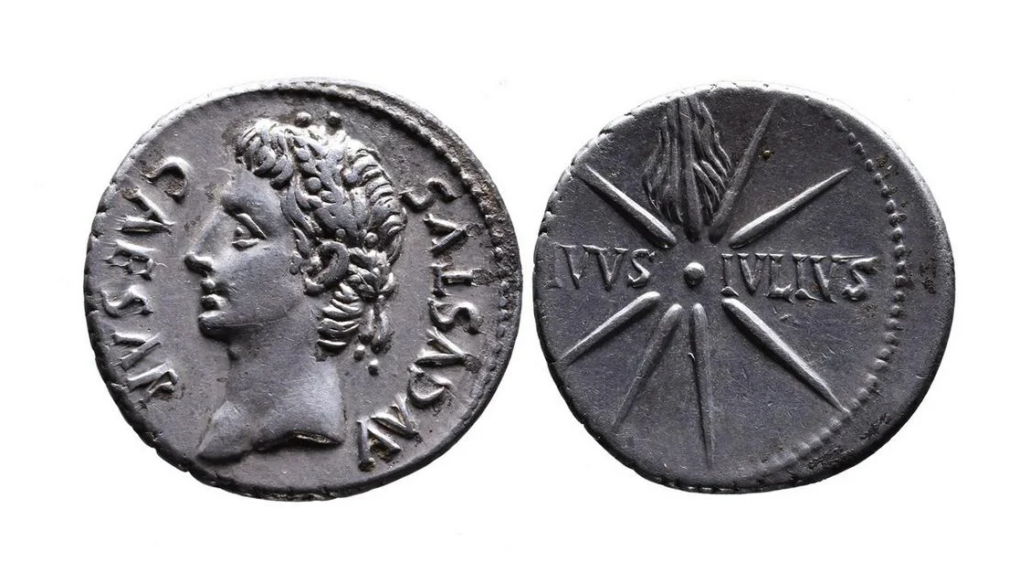 An Ancient Roman Imperial AR (silver) denarius, struck circa 19-18 BC at an unidentifiable Spanish mint, bears the head of Caesar Augustus wearing a laurel wreath in high relief on the obverse, and a comet with eight rays and a tail on the reverse. Visually stunning and rated extremely fine, the 20.0mm, 3.72g coin is estimated at £2,000-£3,000. 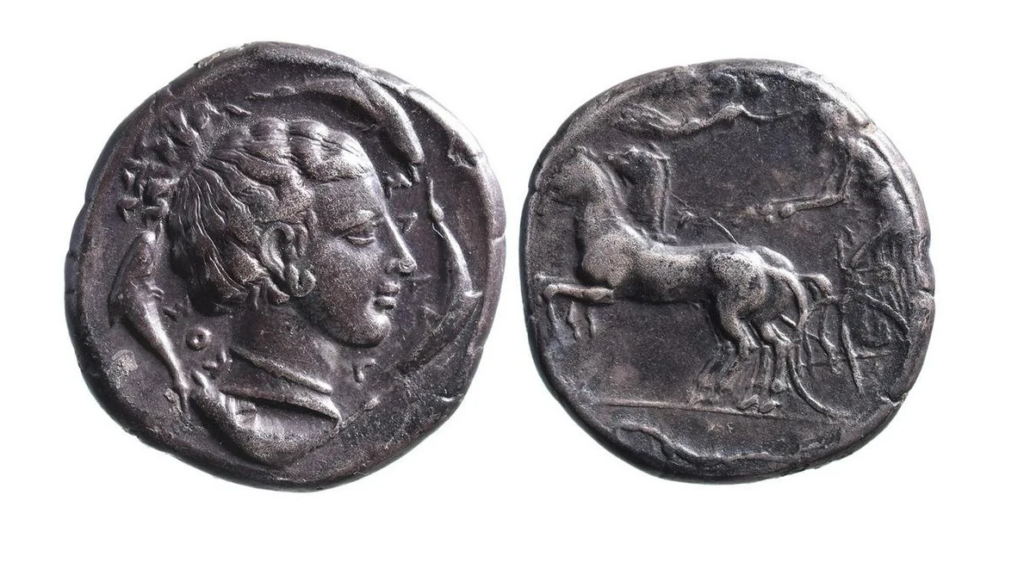 An even earlier coin, an Ancient Greek AR (silver) tetradrachm from Sicily, Syracuse, dates to the Second Democracy, circa 440-430 BC. The head of Arethusa surrounded by four dolphins is shown on the obverse, while the reverse is detailed with an image of Nike flying above a charioteer driving a quadriga. Estimate: £1,200-£1,800 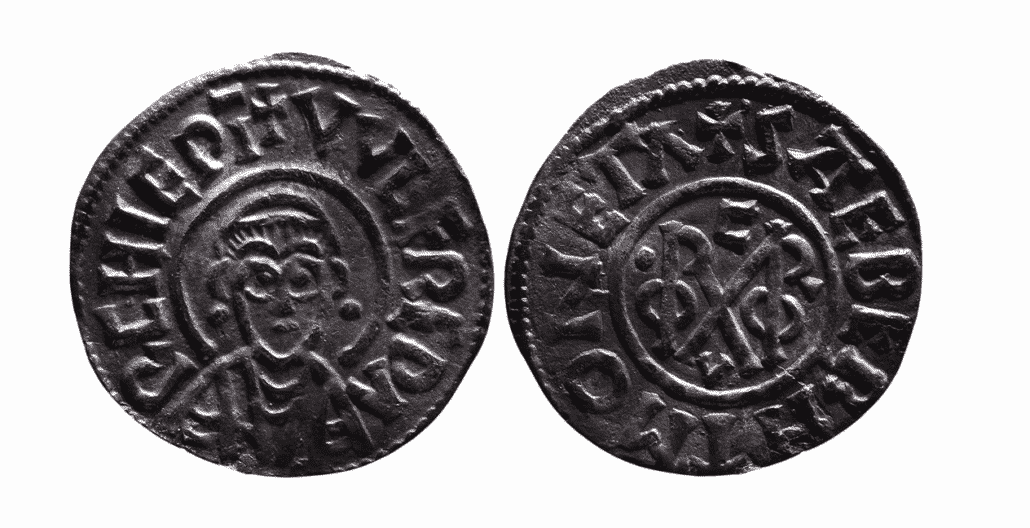 Circa 810-815 AD Group II coin with tonsured bust of Archbishop Wulfred with a pellet to each side and ‘+VVLFREDI ARCHIEPISCOPI’ legend on obverse; ‘DOROBERNIA C’ monogram with ‘+SAEBERHT MONETA’ legend for the moneyer Saebeorht at Canterbury mint. Estimate £2,500-£3,500

A rare witness to life in Medieval England, a circa 810-815 AD Group II coin features a tonsured bust of Archbishop Wulfred with a pellet to each side and is stamped with the legend +VVLFREDI ARCHIEPISCOPI. The monogram DOROBERNIA C and the legend for Canterbury mint moneyer Saebeorht are shown on verso. Estimate £2,500-£3,500

Historical iron and bronze weaponry will share the Sunday, June 21 session with a sensational selection of wearable ancient jewelry. Bidders can choose from beautiful rings, pendants, necklaces and brooches of bronze, silver and gold, each uniquely crafted and absolutely authentic.

Formerly the property of a London art expert, a rare two-part Greek bronze Chalcidian helmet (shown at top of page) dating to circa 500-300 BC (Classical to Alexander the Great period), has hinged cheek pieces, a high-crested crown, and a smooth, fine patina. Its provenance goes back to an old collection formed in Finland and Germany, and most recently was the property of a professional art expert in London. Its estimate is £15,000-£30,000. Also of considerable importance, a rare Ancient Greek Corinthian bronze helmet probably once used by a Spartan warrior is expected to make £15,000-£30,000.

The fascination with Viking culture has perpetuated for many centuries, always conjuring images of seafaring raiders with formidable metal weapons and body armor. Medieval metalworkers of southern Scandinavia were highly respected, as it took great skill to hand-forge objects of war. Excellent examples of this sort of handiwork may be found in Pax Romana’s June 21 session, e.g., two four-plate, riveted bowl-form helmets, each having a £4,000-£6,000 estimate. 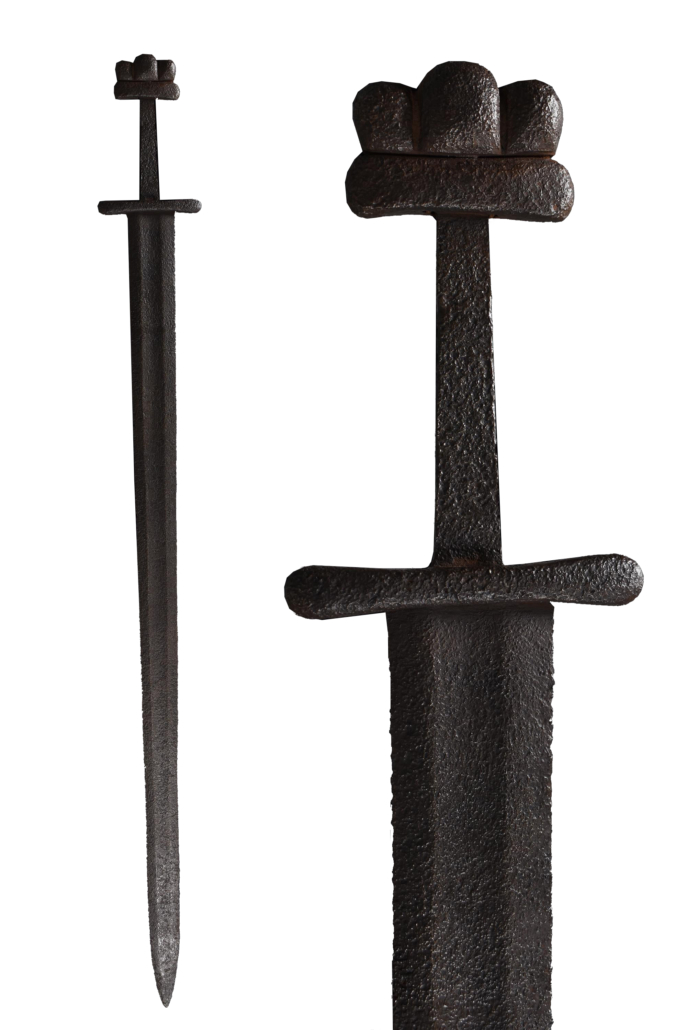 An outstanding and very well-preserved Viking iron sword, 800-1100 AD, has all of the robust earmarkings of a weapon that might have been a Viking chieftain’s constant companion. It has a double-edged, beveled and pointed blade; a broad guard, rectangular integrated grip, and a rectangular pommel ornamented with a tripartite crown decoration. A fearsome weapon measuring 940mm (37in), it is estimated at £4,000-£6,000. 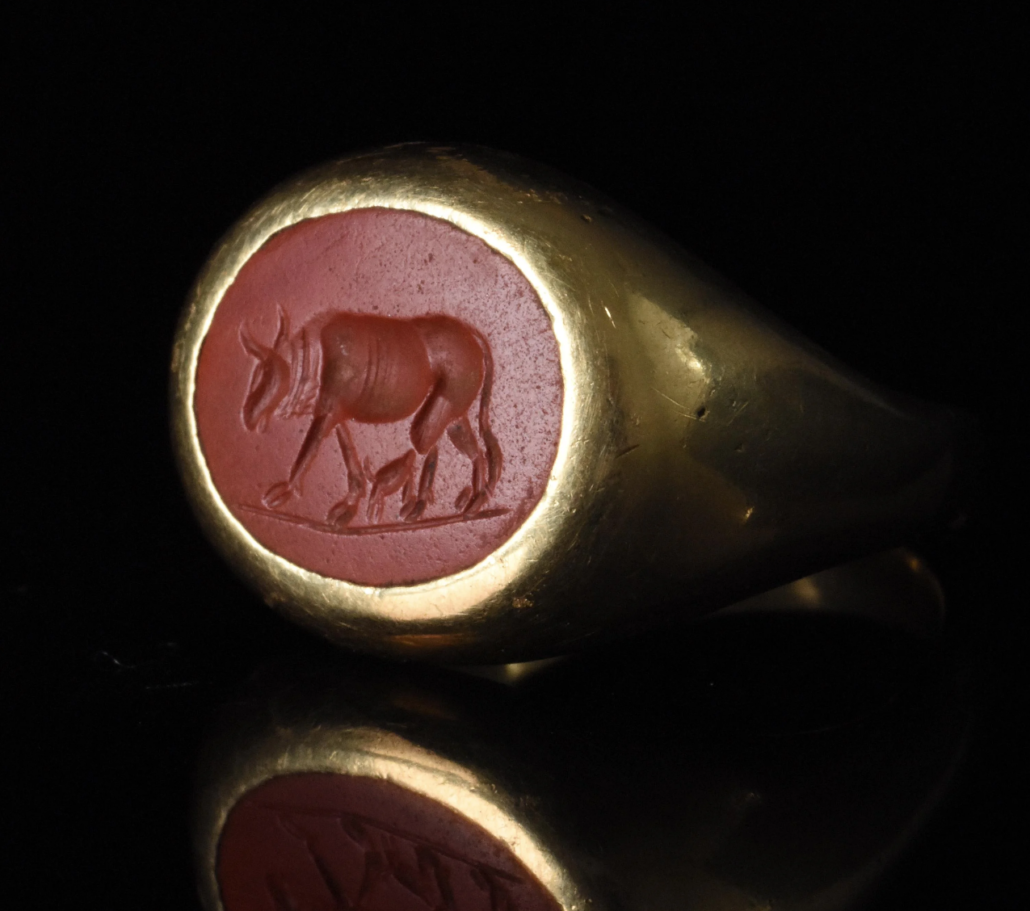 Following relics of ancient wars, the mood softens as the session introduces 358 lots of gorgeous jewelry. Over the past couple of years, increasing numbers of collectors have discovered the charm and great beauty of Roman jewelry, especially gold rings with intaglios impressed with the images of characters, animals or symbols. Several examples of superior quality star in the June 21 selection, including: a 1-300 AD ring with a red carnelian intaglio incised with a well-detailed striding bull, £4,000-£6,000; and a circa 180-235 AD ring with an amethyst intaglio incised with the portrait of an empress, probably Julia Mamaea, mother of Roman emperor Alexander Severus, £7,500-£12,500. 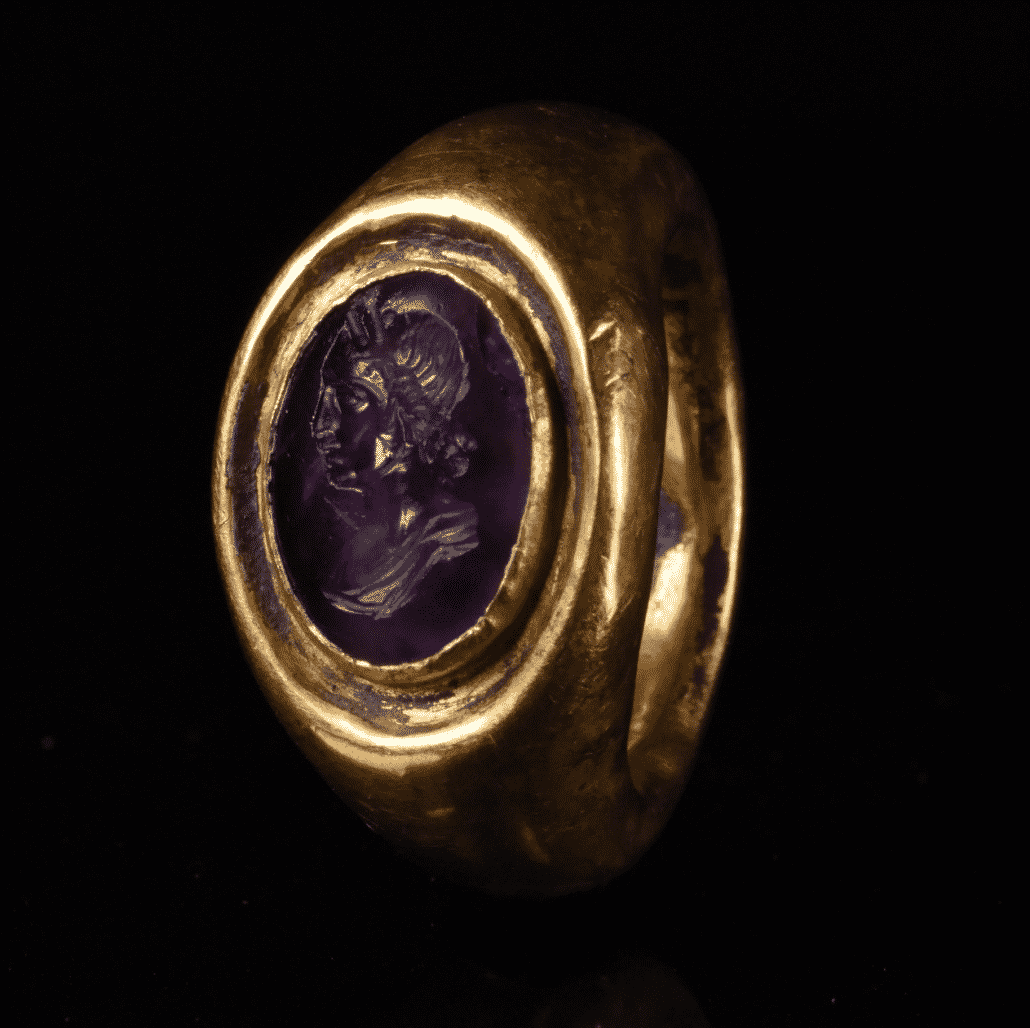 Also, a Roman openwork-gold ring with a satyr incised on its red stone intaglio could reach £3,000-£5,000; while a ring with an oval bezel inset with an elliptical stone incised with the image of a seated god – like a signet ring used to seal letters or documents – will be offered with a £4,000-£6,000 estimate. 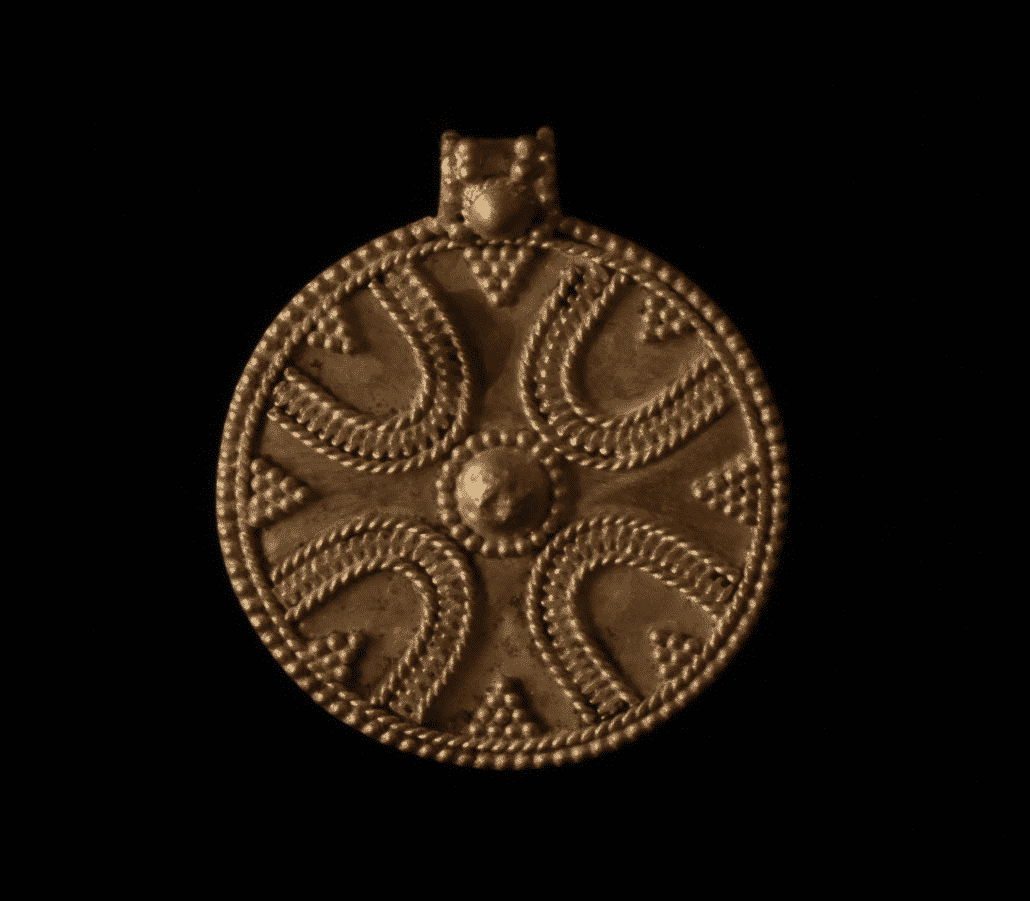 Pax Romana is a member of the British Numismatic Trading Association (BNTA) and the Art Loss Registry (AR). Each and every auction item sold by Pax Romana conveys with a professional Certificate of authenticity signed by Dr Ivan Bonchev. The company ships worldwide, and all packing is handled by white-glove specialists in-house.