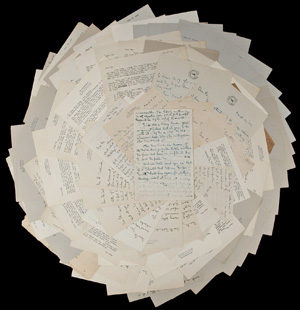 An extraordinary archive of letters from lyricist Ira Gershwin, offering rare insights into the mind and method of his brother and collaborator, composer George Gershwin. Estimate: $80,000-$120,000. PBA Galleries image.

SAN FRANCISCO – PBA Galleries will auction a remarkable collection of manuscript and autograph material on Thursday, Nov. 15. The sale is comprised of 174 select lots of rare and interesting manuscripts, documents, letters, and other archival material relating to history, literature, science, culture and society. LiveAuctioneers.com will provide Internet live bidding.

Subjects will range from the exodus of German Jews from Nazi Germany, to the occupation of Cuba and the Philippines by the U.S.; from the first female doctor in America to the genius of George Gershwin; U.S. presidents including Grant, McKinley, Taft, Harding, Eisenhower and the Roosevelts; early California; the Civil War; and World War II.

On offer is a fascinating and highly important archive of letters, documents, photographs and other material relating to the life and family of Alfred Schnurmann, a German Jew who managed to emigrate from Germany in 1940. The crucial events of the 20th century through the prism of a Jewish family who fled Nazi Germany, an era that saw two world wars, the rise of Nazism in Germany, the persecution and eventual genocide of the Jews, the founding of the Jewish state of Israel, and the rise of postwar America into a prosperous superpower.

All this and more is recorded in a remarkable assemblage of documents, letters, photographs and other items saved by Schnurmann over the years, dating back to before his birth, and ending with the death of his daughter in 2010. There are over 500 letters between family members, friends, acquaintances and other refugees from Germany, about 150 of them from Palestine and Israel; over 200 documents relating to Alfred Schnurmann and his daughter Marion, including his attempts to emigrate from German; approximately 1,000 photographs, 400 or more from Germany before and during World War II, and more. The archive is estimated at $80,000-$120,000.

Perhaps the most influential force in American music during the first half of the 20th century was George Gershwin, composer and pianist, creator of the orchestral compositions Rhapsody in Blue and An American in Paris, as well as the opera Porgy and Bess. Gershwin died from a brain tumor in 1937, not yet 40 years of age, but his music lived on. Throughout most of his career he collaborated with his older brother Ira, who wrote the lyrics to his compositions, and none knew him better. Up on the block is an extraordinary archive of letters from lyricist Ira Gershwin, offering rare insights into the mind and method of his brother and collaborator, composer George Gershwin.

The archive is composed of some 150 letters from Ira Gershwin to Edward Jablonski, discussing at length George Gershwin and his music, beginning in 1940 when the latter was still in high school. Jablonski was to become an important historiographer of musicians, publishing numerous works including a major biography of George Gershwin. Jablonski was infatuated with the music of the younger Gershwin, managed to find Ira’s address and wrote to him, beginning a correspondence, “and as it turned out, a friendship with Ira Gershwin.” Thus began four decades of letters, Ira responding to Jablonski’s endless queries about George and his music, with side trips into the music industry, Ira’s ongoing projects, his opinions of actors, actresses and singers, criticism of composers and lyricists, reviews of movies and dramatic productions, his thoughts on new records being released, Jablonski’s publishing and recording enterprises, family life and reminiscences. There is much more fabulous content, a rare assemblage of unpublished correspondence crucial to understanding the music and entertainment industry in the mid-20th century. The archive is estimated at $80,000-$120,000.

An archive of rare and significant manuscript material relating to President William McKinley, the Spanish-American War, and more, including letters from McKinley to his wife and to his future secretary of state will be sold. The material in the archive was passed down through the family of William R. Day, Ohio lawyer and judge, longtime associate, adviser and friend of William McKinley, who served as his assistant secretary of state and secretary of state during the Spanish-American War and the period leading up to it, headed the United States Peace Commission formed to negotiate an end to the war and was nominated to the U.S. Supreme Court by Theodore Roosevelt. Included is material not only relating to the Day family, but also the McKinley family, since Luther Day, son of William R. Day, married Ida Barber, William McKinley’s niece, daughter of his wife’s sister, Mary Saxton Barber. The McKinley’s two daughters died in childhood or infancy, so many of the family letters, such as those from William McKinley to his wife, descended through his sister-in-law’s family. Included is a group of five letters from William McKinley to his wife, Ida, written while president, part of a large archive of material relating to McKinley and his secretary of state (and later Supreme Court justice) William R. Day. This archive has a $10,000-$15,000 estimate.

Also included is a revealing archive of letters, documents, reports and other material pertaining to the lead-up to the Spanish-American War and its execution, passed down through the family of Secretary of State William R. Day. It is estimated at $5,000-$8,000.

Other highlights include a letter from Elizabeth Blackwell, first woman doctor in America, to her brother, about buying the body of a black baby for dissection (estimate: $8,000-$12,000). A rare stencil typescript reports on operations of the 9th U.S. Army in France in the fall of 1944, compiled the following spring (estimate: $5,000-$8,000). An autograph note on a printed card, signed by Albert Einstein, thanking the recipient for their birthday greetings (estimate: $4,000-$6,000). An archive letters and documents to or from William Shepard Wetmore, China Trade merchant and supercargo, offering important insights into commercial transactions between East and West in the 19th century (estimate: $3,000-$5,000). An autograph letter signed by Ulysses S. Grant, to departing Mexican envoy Matias Romero, who had spent four years lobbying in Washington for aid fighting Emperor Maximilian I (estimate: $3,000-$5,000). 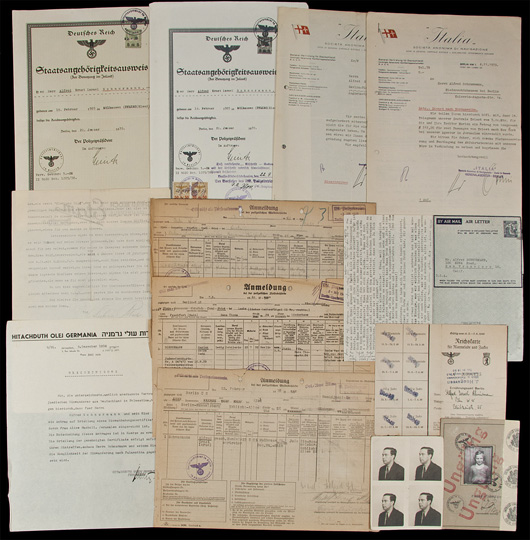 An important archive of letters, documents, photographs and other material relating to the life and family of Alfred Schnurmann, a German Jew who managed to emigrate from Germany in 1940. Estimate: $80,000-$120,000. PBA Galleries image. 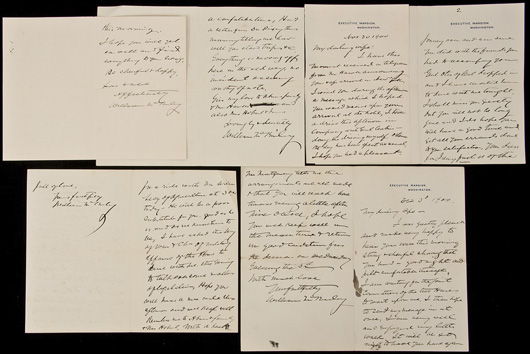 A group of five letters from William McKinley to his wife, Ida, part of a large archive of material relating to the president and his secretary of state (and later Supreme Court justice) William R. Day. Estimate: $10,000-$15,000. PBA Galleries image.