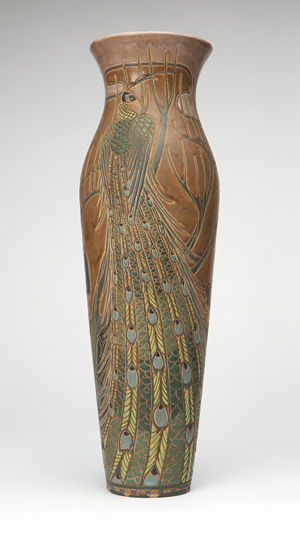 This 1910 masterwork by Frederick Hurten and Agnes Rhead, made at the University City Pottery, is conservatively estimated to hammer for between $70,000 and $90,000. John Moran Auctioneers image.

PASADENA, Calif. – John Moran Auctioneers will present a large and exceptionally high quality selection of early 20th century design, silver, Continental furnishings and fine art from important Southern California estates and private collections at their 200-lot Antiques and Fine Art Auction scheduled for April 29. Additionally, collectors of American art pottery will be thrilled to find a masterwork by one of the leading artists in his field, Frederick Hurten Rhead (1880-1942).

The large vase, standing nearly 18 inches tall, is signed to the underside with Rhead’s monogram and that of his wife and collaborator, Agnes (b.1877), along with marks for the University City Pottery in Missouri and the American Women’s League, and dated 1910. Magnificently incised and polychrome-enameled with the sweeping figure of a peacock, its highly detailed tail feathers fanning across the buff-colored ground interlaced with stylized tree branches, it possesses the immense authority lent by a striking design and outstanding execution.

Though Rhead’s most ubiquitous contribution to 20th century design is as the designer of Fiestaware, the brightly colored dinnerware manufactured by the Homer Laughlin Co., it was during his short time teaching at the People’s University in University City, Mo., alongside several other notable artists, including Adelaide Alsop Robineau and Taxile Doat, that the British-born artist produced the tiles and vases that today rank among his most highly valued works. A four-tile panel, also from University City and dating from 1910 and also featuring a peacock, realized $510,000 at auction in October 2012, and another 1910 piece, a vase decorated with mushrooms, fetched $120,000 at auction in June 2012. Another vase, dating from 1911 and also decorated with mushrooms, is held in the collections of the Los Angeles County Museum of Art.

The vase offered at Moran’s is expected to equal or surpass those examples, though it has been assigned a conservative estimate of $70,000-$90,000. With its arguably more compelling design, it also arrives on the market with excellent provenance, having not once been offered for sale since its purchase from the pottery in 1910. That purchase was by a couple residing in St. Louis, who subsequently presented it as a wedding anniversary and baby gift to the Meyers Family of Iowa City, Iowa. It has since passed through several generations of the same family, and was only recently rediscovered in the home of the current owner in Southern California.

Fans of European porcelain will not be disappointed. A Meissen porcelain figural group depicting Harlequin and Columbine, modeled by Paul Scheurich on characters in the Russian ballet Le Carnival, is expected to bring $3,000-$5,000 at the auction block. A charming Berlin / KPM plaque of a pale blonde beauty in profile, and another of a Bacchante, are estimated to bring $3,000-$5,000 and $7,000-$9,000 respectively. Expected to earn $800-$1,200 is a Samson porcelain armorial vase, decorated in imitation of Chinese Export famille rose porcelain, that would make an intriguing addition to any collection.

Consignments from a private Malibu collection have ensured that this catalog will also be flush with a number of impressive pieces of Continental furniture. A Louis XV-style gilt-bronze mounted vitrine cabinet, measuring just over 9 feet tall, is expected to find a new home for $40,000-$60,000. A breathtaking Beckstein Empire-style grand piano (estimate: $50,000-$70,000) will also be offered. Made in 1882, it features an impressive gilt bronze-mounted case decorated with lyres, scrolling foliage, rosettes, and laurel sprays. Buyers seeking dramatic lighting options will be pleased to see the large Louis XV-style gilt bronze 24-light chandelier in this catalog (estimate: $30,000-$50,000).

Competitive prices are also expected for decorative silver. Offerings from American makers include pieces by S. Kirk & Son, Tiffany, Samuel Bell, Gorham, and Shreve & Co. among others. A six-piece S. Kirk & Son silver tea and coffee service, repousse-decorated with mixed flowers and foliage and featuring charming floriform finials, includes a kettle on a stand, and is expected to find a new owner for $6,000-$9,000.

Those seeking a tea set in a more muted aesthetic might be more drawn to a stately three-piece hand-hammered sterling silver coffee service by Shreve & Co. (estimate: $1,000-$2,000). Four pieces of rare flatware by much sought-after San Antonio, Texas, maker Samuel Bell, are conservatively estimated to hammer between $300 and $500. Silver by British and Continental makers is also slated for sale. A Danish modern sterling silver pitcher by Kay Fisker for A. Michelsen, Copenhagen, carries a $4,000- $6,000 estimate, while a Regency sterling silver teapot by Matthew Boulton is priced at $800-$1,000. A pair of very large Old Sheffield Plate four-light candelabra carrying the maker’s mark of W. Garnett should realize $800-$1,200.

• A rare pair of terra-cotta relief sculptures by British sculptor Robert Wallace Martin (1843-1923), each depicting a classical youth playing a pipe and a classical maiden in a landscape, respectively, is anticipated to earn $6,000-$9,000.

• A number of French bronzes by varying makers are up for grabs, including a figure of a dog by French artist Pierre Jules Mene (estimate: $700-$1,000).

The fine art offerings in this catalog also promise a number of standout highlights. Perhaps most anticipated of the group is View of the Roman Campana, 1796, by Russian painter Feodor Matveef. An impressively proportioned canvas (measuring 58in x 72.25in), this work is expected to hammer for $70,000-$90,000. Now Reigns Here a Very, Very Peacock by English artist George Lance is a monumental still life tableau bordering on trompe l’oeil, featuring a peacock flanked by flowers and a mountain of fruit. Exhibited at the Royal Academy in 1885 as well as the American Centennial Exhibition in Philadelphia (1876), this work is estimated to bring $50,000-$70,000. A charming composition by Austrian artist Theodor von Hormann, depicting children playing on an outdoor patio, is expected to realize $12,000-$18,000.

Consignment inquiries are always welcomed – interested parties are encouraged to contact the John Moran Offices directly via phone: 626-793-1833 or email: info@johnmoran.com for additional information regarding consignment. 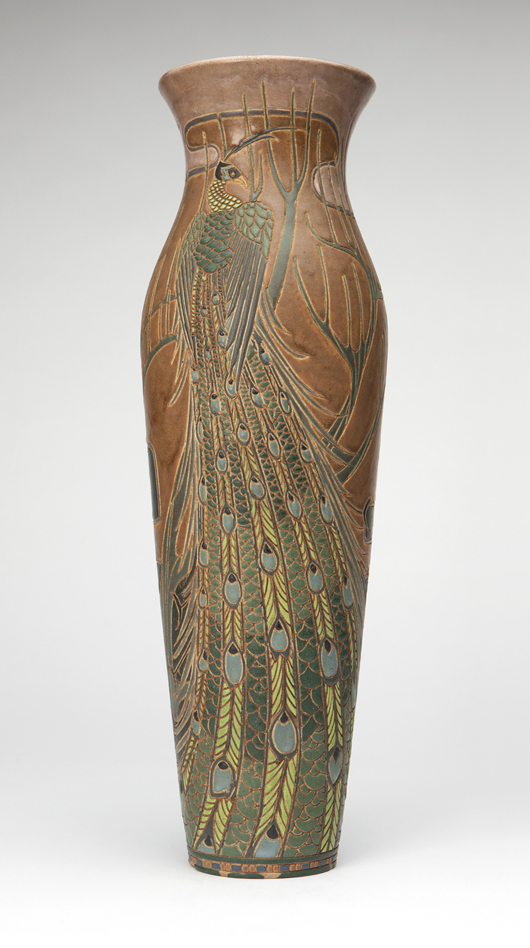 This 1910 masterwork by Frederick Hurten and Agnes Rhead, made at the University City Pottery, is conservatively estimated to hammer for between $70,000 and $90,000. John Moran Auctioneers image. 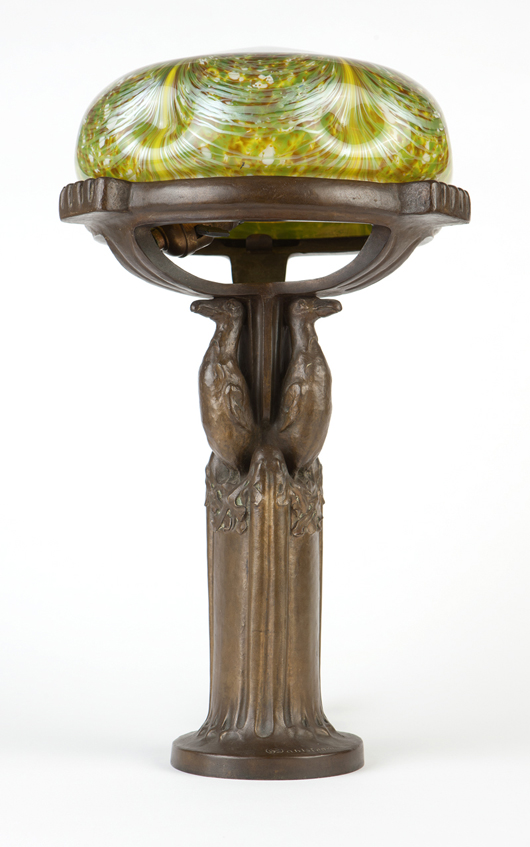 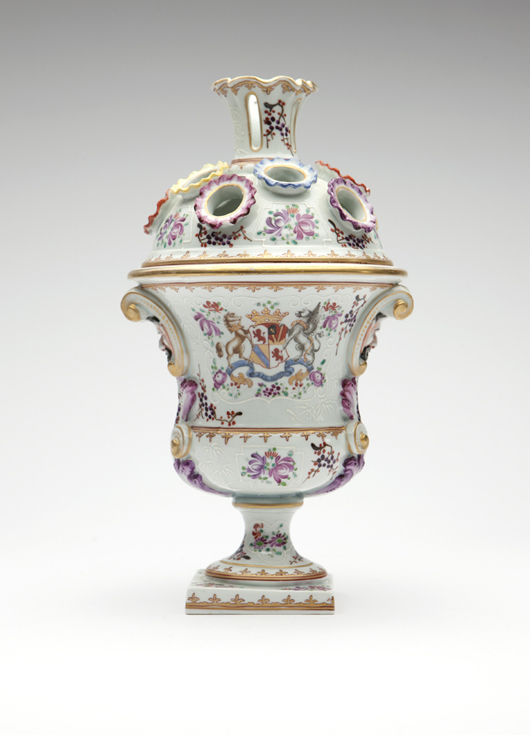 This highly decorated Samson porcelain Chinese export style vase is only one of many Continental porcelain pieces up grabs in the April 29 catalog. Estimate: $800-$1,200. John Moran Auctioneers image. 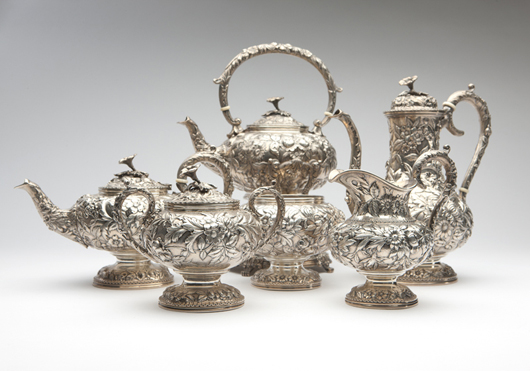 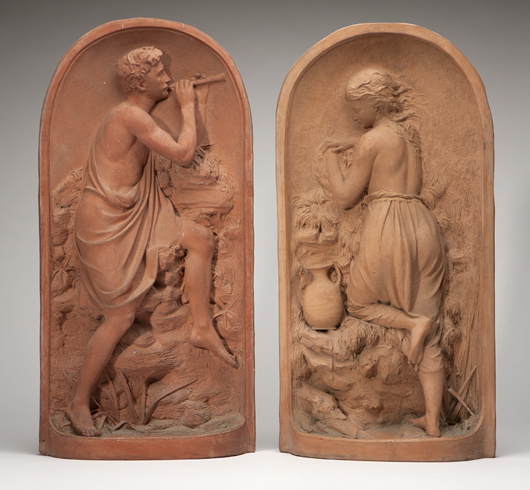 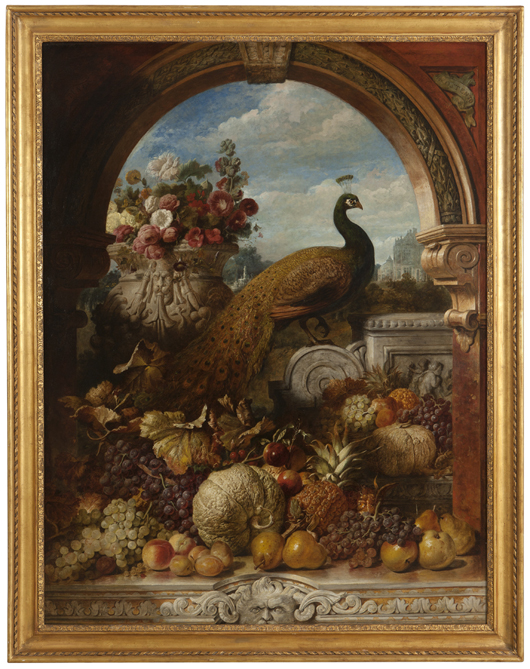