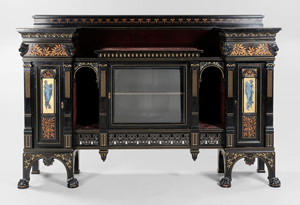 This 58¾ inch by 87¼ inch by 18¾ inch signed Herter Brothers cabinet with gilt and ebonized surfaces has a presale estimate of $15,000-$25,000. A cabinet with the same form but different ornamentation is illustrated in Herter Bros. Furniture and Interiors for a Gilded Age. Brunk Auctions image.

ASHEVILLE, N.C. – Bird hunters might consider storing their shotguns and postponing any forays to the lake on Sept.11 and 12. Ducks and quail can wait; the trophies available at Brunk Auctions won’t. They will almost certainly have migrated by Sept. 13th.

For starters, there are 47 lots of decoys, most signed by Chris Smith (1858-1937), the founder of the prestigious wooden boat company, Chris-Craft. Before boats, Smith and his brother Henry were commercial duck hunters and Chris carved over 1,000 decoys between 1870 and 1925. That is a pedigree that comes with bragging rights.

Few painters loved hunting dogs more than classically trained American artist Percival Rosseau (1859-1937). “A man should paint what he knows best and I know more about animals than anything else,” he said. Rosseau’s benefactor, industrialist Samuel G. Allen (1870-1956), shared his affection for hunting dogs. He helped found the Amateur Field Trials Clubs of America (1917) and the English Spaniel Field Trial Association (1922). Two of the Rosseau paintings in the sale are of Allen’s spaniels: A Tripple (sic) Point: Bob, Prince and Ned 1924 and End of a Perfect Day, Allen’s Flag and Queen 1923. Each carries a presale estimate of $40,000-$60,000. Samuel Allen owned at least five Rosseau paintings; Perfect Day was one of them and there is a possibility that Allen also owned Tripple Point.

Rosseau immortalized Samuel Allen’s dogs. Andrew Wyeth (1917-2009) did the same for the people he knew and loved. “I’m involved with the people I paint,” he once said. “They are not people I paint and send home.” The sportsmen who posed for Wyeth’s Shore Pine 1939 were his lifelong friends, Milton Teel and Maine fisherman Walt Anderson. The scene is Turkey Cove, an inlet near Port Clyde, Maine. The 22½ inch by 30 inch watercolor over pencil on paper (est. $60,000-$90,000) was sold by Macbeth Gallery in New York in 1940 and given to the consignor in 1955. Walt Anderson also posed for Wyeth’s Sea Dog, a portrait of the red-bearded old salt owned by the North Carolina Museum of Art.

In addition to the sport paintings, three furniture lots are expected to do well. Two are Southern, a Brunk Auctions specialty.

One of the best examples of post-Revolutionary Charleston cabinetwork is a massive three-part desk and bookcase consigned by York Place, a South Carolina treatment facility. In mahogany with white pine, red cedar and oak secondary, it is one of the few Southern pieces to survive with fully inlaid feet. Its broken-arch pediment has delicate satinwood fan rosettes and an inlaid central finial plinth. Doors are glazed and the long drawers are banded and inlaid. The consignor was originally a Charleston orphanage that opened its doors in 1850. The home was relocated to York, S.C., in 1910 and evolved into a residential facility for children and adolescents beginning in the 1970s. The proceeds from the sale of the desk/bookcase (est. $60,000-$90,000) will help the non-profit continue to serve young people in need of psychiatric hospitalization.

Consigned from upstate South Carolina and constructed a generation after the Charleston desk and bookcase is an important inlaid huntboard or sideboard. In walnut and cherry with yellow pine secondary, its most distinctive features are an inlaid snake between the central bottle drawers and its elaborate barberpole inlay on the three front legs. On finely tapered legs, the huntboard is expected to bring $25,000-$35,000.

A fine 1870s Herter Brothers inlaid cabinet (est. $15,000-$25,000) in mahogany, cherry and mixed woods with gilt and ebonized surfaces comes from New York’s Gilded Age. Pedestal ends with carved lion’s heads, leaf and berry surrounds and painted classical figures stand on carved paw and pad feet. “Herter Bro’s” in impressed on the back. Also on the back is the pencil inscription, “Milne cabinet,” possibly the name of its original owner.

Chinese and Japanese lots come up the second day. Watch for considerable overseas interest in lot 1392, a blue and white Chinese bowl, probably Kangxi (1662-1722). Mythical beasts decorate the exterior and interior. On the base is a blue six-character mark for Chenghua (1465-1487). The bowl is expected to sell for $2000/$4000.

LiveAuctioneers will provide the Internet live bidding on both days of Brunk’s Sept. 11-12 sale. 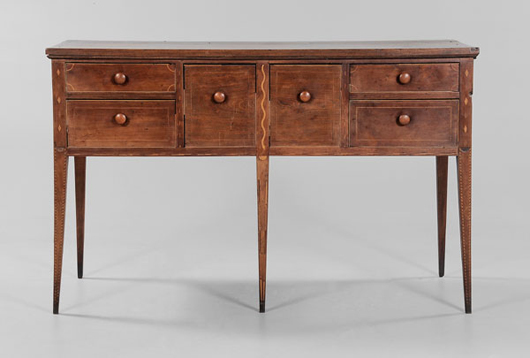 A classic South Carolina huntboard (est. $25,000-$35,000) with a twist – an inlaid snake between the two bottle drawers. It descended in the Casey and Dalrymple families of Newberry and Anderson, S.C. Brunk Auctions image. 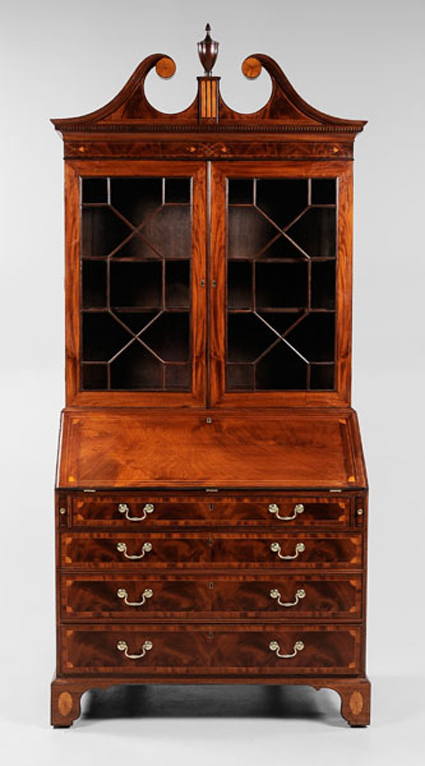 Standing 70½ inches and 43¼ inches deep, this massive late-18th-century Charleston desk and bookcase was recently conserved by David Beckford of Charleston, S.C. In highly figured mahogany veneers and elaborate inlays, this important piece of Southern furniture is expected to sell for $60,000 to $90,000. Brunk Auctions image. 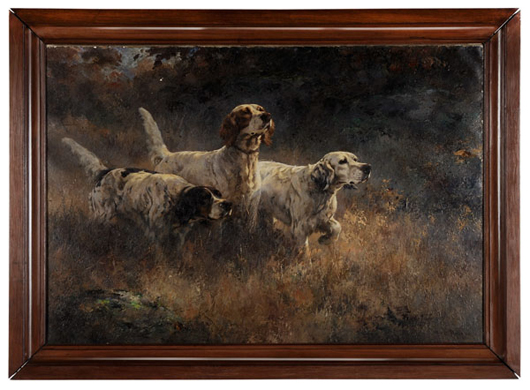 Although the title reads Tripple Point; Bob, Prince and Ned 1924, Bob is on the right, Ned on the left and Prince in the center. Bob was featured in at least one other oil on canvas by Percival Leonard Rosseau, a noted hunting dog painter. The signed painting is one of three Rosseaus in the sale and is expected to bring $40,000-$60,000. Brunk Auctions image. 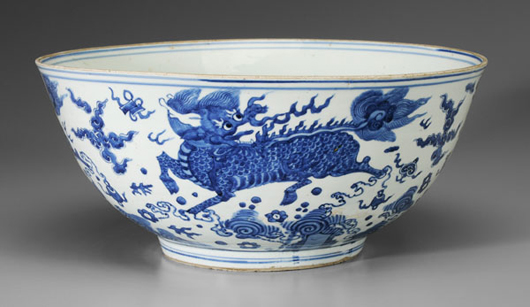 Chinese bowls have been the subject of great and wonderful surprises of late. Watch for fireworks if this 6¾-inch by 15-inch blue and white bowl opens above its $2,000 to $4,000 estimate.