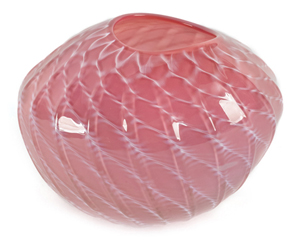 DOWNINGTOWN, Pa. – On Tuesday, March 18, Pook & Pook Inc. will hold its first decorative arts sale of 2014. The sale includes an assortment of furniture, art and decorative accessories. The sale also includes material from the Capt. Hall Jackson Tibbits collection from Long Island, N.Y., and over 100 lots from the estate of Kristina Barbara Johnson of Princeton, N.J.

Internet live bidding will be facilitated by LiveAuctionerers.com.

An exciting selection of lighting is crossing the block, including tin and glass examples, student lamps, Victorian fluid lamps, and electrified lights. Of particular interest to buyers are three lamps including a brass and slag glass table lamp estimated to bring $2,000-3,000, a patinated bronze and slag glass table lamp predicted to bring $1,000-1,500, and a pair of brass and marble table lamps with goddess and cherub decoration expected to bring $800-1,200. A number of art glass pieces have caught the eye of quite a few collectors.

A Fritz Dreisbach studio art glass vase that is both signed and dated is expected to bring $500-800. Dreisbach, who is both a teacher and an artist, has won numerous awards for his contributions to the American Studio Glass Movement and is a founding member of the Glass Art Society. Another exciting studio art glass piece coming up is a “feelie” by Rose and Ernie Cabat. “Feelies” offer collectors not just visual beauty, but a tactile experience as well. Rose Cabat, now almost 100 years old, is the oldest known practicing ceramicist in the United States. Three pâte-de-verre pieces, one by Gabriel Argy Rousseau and two by Almeric Walter Nancy, are offered and are expected to bring $400-800 each. Pâte-de-verre is French for glass paste. A paste is created from powdered frit (granulated glass) that has been mixed with a binder and spread on the inside of a mold in a thin layer. The result is a thin-walled transparent to opaque vessel. A beautifully crafted pair of Arts and Crafts-style patinated bronze candlesticks are predicted to bring $300-500.

A wallpaper dresser box decorated with both floral and geometric designs is expected to bring $200-300.

A large collection of Asian art and objects crossing the block include porcelains, carved ivory, mother of pearl inlaid pieces and cloisonné pieces. Other exciting finds include two painted bellows hoping to fetch $500-800.

A set of Hall & Sellers Colonial currency notes with an estimate of $300-500 is part of a larger group of currency. A whimsical Dana salesman’s sample ice-cream maker from the early 1900s expects to bring $150-250. A carved oak musical bracket clock by German maker Winterhalder & Hofmeier is estimated at $800-1,200.

Textiles to include needleworks, samplers, coverlets, quilts, and carpets are also part of the March 18 sale. Two Trip Around the World patchwork quilts, circa 1900, are expected to bring $250-450 each. A wool needlework, dated 1852, wrought by S. Lister, is projected to bring $200-400. Two silk on linen samplers, dated 1833 and 1834, both wrought by Rachel Van Fossen, are expected to fetch $400-600. An embroidery of a young girl with her African-American nanny done in the 1800s has sparked interest for several collectors and is estimated to bring $200-300. A Wake County, N.C., log cabin quilt, 19th century, the blocks of which are created out of dozens of different patterned cloths, is predicted to bring $200-400.

Hundreds of pieces of furniture are up for auction in the March 18 sale. A hard pine one-piece corner cupboard from the 19th century that is purportedly from Snow Hill, Md., is anticipated to sell for $1,500-2,500. A beautifully ochre grain-decorated dry sink from Pennsylvania with its cupboard top is expected to bring $400-700. A painted pine wall cupboard with raised panel doors carries an estimate of $500-1,000. A York County, Pa., dower chest decorated with philflots on the front, sides, and top, is calculated to bring $1,000-1,500. A Pennsylvania Queen Anne walnut chest on frame, the top circa 1700, the base later, offers bidders a period look without a period price (est. $1,000-1,500).

Over 100 items from the collection of Kristina Barbara Johnson, Princeton, N.J., are offered in the March sale. Patrick Bell and Edwin Hild, of Olde Hope Antiques Inc. in New Hope, Pa., had the following to say about their dear friend: She “was a passionate collector who started developing her folk art collection when she became involved with the Museum of American Folk Art (now the American Folk Art Museum) in the mid 1960s. She joined the board of trustees in 1968, becoming president in 1971 and with great dedication remained on the board through 2010, all the while following her passion for buying the objects that appealed to her discerning eye. … Kristina was a willing lender to exhibits and publications and there was hardly a folk art book published that did not feature pieces from her expanding collection.”

The portion of her collection offered at the upcoming auction begins with several pieces of signed art by Anton Kamp (American 1898-1984-5). These include Kamp’s October, September Pool, Up in Fundy, The Salmon Pool, and The Hills of Home. An incredible oil on board still life by Robert White (American 1921-2008) depicting cherries and peaches in a Chinese porcelain blue and white bowl atop an intricately carved wooden stand is expected to fetch $300-500. A William Matthew Prior (American 1806-1873) oil on canvas landscape with Native Americans standing by a lake with mountains in the distance is anticipated to bring $800-1,200.

A selection of decoys follows including several shore birds, ducks and fishing decoys. An unusual Eskimo carved bone mask is expected to bring $400-600. One fun lot expected to grab quite a few bidders’ attention, and $800-1,200, is a graduated set of four sewer tile bears by Louise Goodman. Goodman is a ceramicist from the Southwestern United States known for her ceramic animals. Continuing with the unique trend in items is a patriotic folk art painted turned and bentwood armchair decorated in red, white, and blue stripes. The chair is expected to bring $400-600.

Over 50 lots from the collection of Capt. Hall Jackson Tibbits (1797-1872 are up for auction at the March sale as well. The collection includes a number of China trade items the captain brought back with him from his trips across the Pacific. A China trade silver flatware service bearing the touch of Khecheong together with a handful of pieces bearing the touch of Cutshing are expected to bring $1,000-1,500. A rare pair of China trade painted clay nodding figures are offered with an estimate of $800-1,200. An interesting miniature China trade watercolor on ivory portrait of a mother and son wherein the mother is holding a portrait of her husband is expected to bring $800-1,200. The portrait, which retains its original Chinese carved and lacquered frame, may be Mrs. Hall Jackson Tibbits and her son, Robert, who was born in 1840, making the portrait the woman holds that of Capt. Hall Jackson Tibbits.

A large selection of jewelry is also incorporated in the sale. A carved coral cameo brooch (est. $300-500) from the late 19th century features a woman with grapes and vines in her hair holding a vase in her left hand. Three 14K gold men’s rings are offered as one lot and include a Masonic example, a military example, and one with a gold coin marked “dos y medio pesos * 1945” (est. $400-600). A yellow gold bracelet is available that features shadow box silhouettes of various landscapes (est. $600-1,000).

The sale ends with a selection of carpets to include Kashan, Kazak, Hamadan, Caucasian, Malayer, Aubusson, Sarouk and Chinese examples. 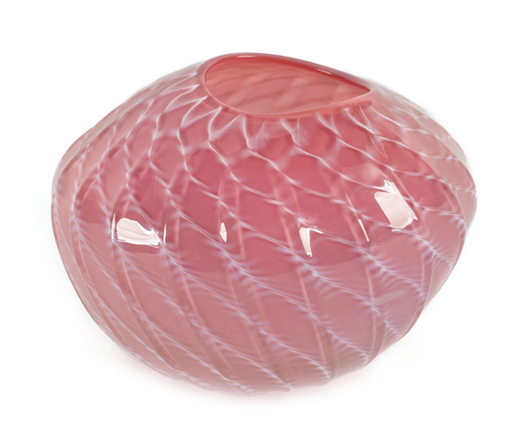 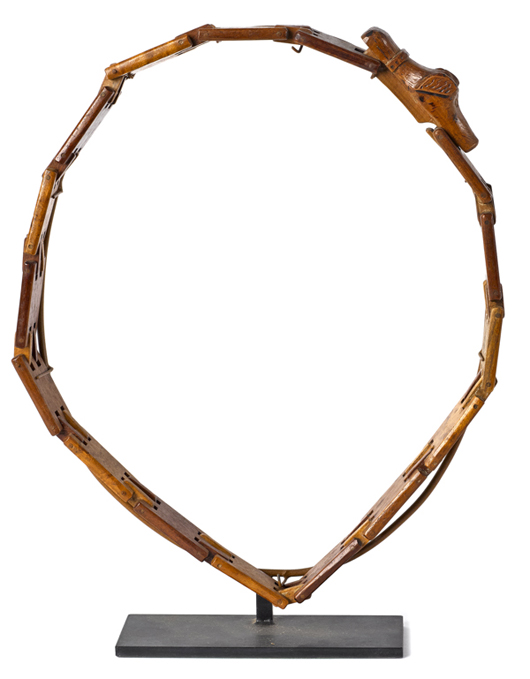 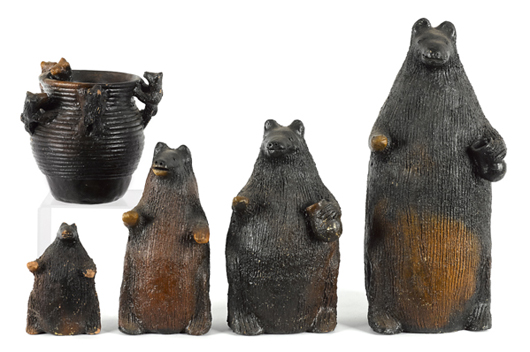 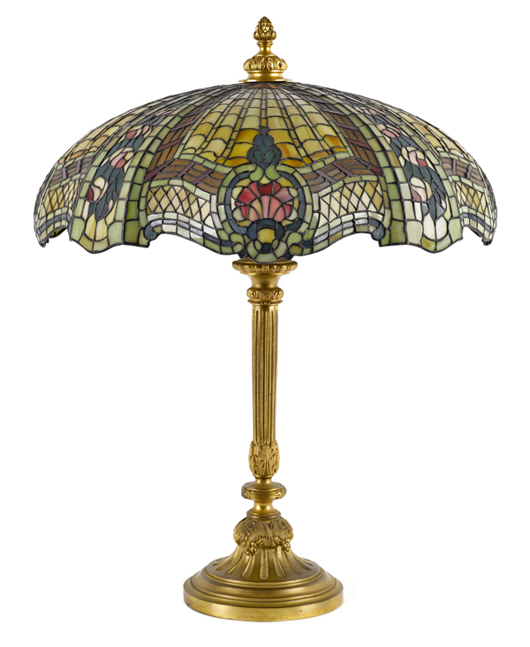 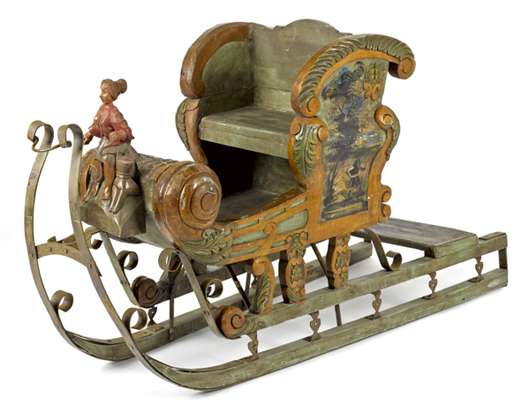 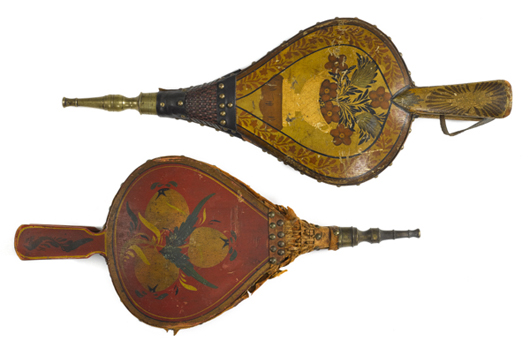 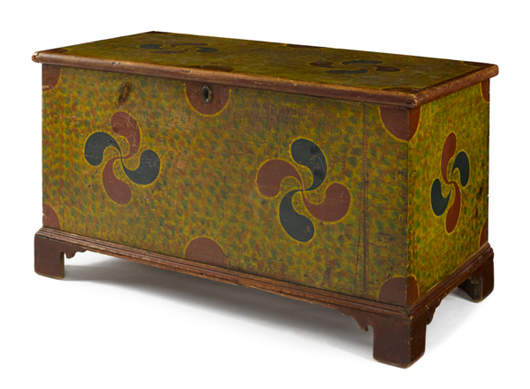