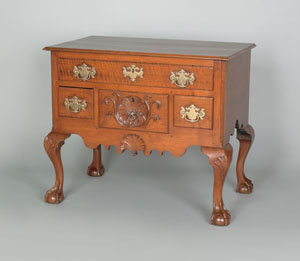 LiveAuctioneers will provide Internet live bidding for the 400-lot auction.

Charming Forge Mansion is nestled atop a hill overlooking a site that once buzzed with industrial activity and the clanking of a forge hammer. The forge is closed now and many of the buildings are gone, but the mansion still looks out over Tulpehocken Creek that once powered this manufacturing site. The forge was built in 1749 by John George Nikoll and Michael Miller, and in 1763 was acquired by William Henry Stiegel and Michael Gross. Prior to America Revolution, the forge produced as much as 300 tons of bar iron per year.

The Hendersons purchased the mansion in 1993 and have worked for nearly two decades to restore it to its original late 1700s Georgian appearance and maintain its historical integrity. They decorated the restored mansion with a mix of period pieces dating from 1760-1790 giving it a true late 18th-century appearance. This selection of furniture and accessory items will be sold beginning at 5 p.m. on Oct. 1 following a reception from 3-5 p.m.

Over 400 lots will be offered throughout the evening. Included will be American furniture, porcelain, paintings, coverlets, pewter, glass, metalware and other accompaniments. The sale will begin with an extensive Wedgwood creamware dinner service with a provenance of the U.S. Embassy, estimated at $8,000-$12,000. A Lancaster, Pa., Chippendale walnut dressing table, circa 1770 will follow. Purchased from Philip H. Bradley Co., the piece is adorned with four shells, fluted chamfered corners and ball and claw feet. Several tall-case clocks stand out, including a walnut Chippendale tall-case clock by Philip Maus of Lebanon, Pa. (est. $10,000-$15,000), an elaborate Chippendale clock by John Vanderslice of Womelsdorf, Pa., with dentil moldings and barley twist columns and a walnut tall-case clock by George Oves of Lebanon with and shell carved door and fluted quarter columns.

Homes of that period typically lacked storage closets. Charming Forge was no exception and probably originally contained schranks to serve the purpose. Four of these will be offered during the sale. A Lancaster Co., Pa., walnut schrank, circa 1770, has two doors, each with six raised panels and rattail hinges (est. $10,000-$15,000) and another Lancaster example has a pronounced stepped cornice inlaid with the date 1767 above two double raised panel doors flanked by recessed panel pilasters (est. $15,000-$25,000).

Accessory items included collections of pewter, coverlets, glass, wrought iron and porcelain. An important Chinese export porcelain dinner service from the Willing family of Philadelphia should attract many bidders. With approximately 175 pieces, this set has a floral swag border and urn center decorations (est. $20,000-$30,000). A group of early Delft drug jars with a provenance of Mark & Marjorie Allen and dating from the 1730s will be offered as well as a collection of 25 Pennsylvania jacquard coverlets. Pewter objects comprise pieces by Rufus Dunham, Israel Trask, Roswell Gleason, Blakslee Barns, Freeman Porter, Boardman, Danforth, William Calder and others. A large collection of Stiegel-type clear etched and enameled glass includes bottles, flips, mugs and other pieces.

The Hendersons adorned a large walk-in fireplace with all manner of appropriate metalware. Firefenders, trammels, andirons, bedwarmers, cooking utensils and pots and other items used in the 18th century for warming and cooking are part of the collection together with various lighting devices and candlesticks.

Of special mention are a fine group of Jacob Eicholtz portraits. A small portrait of Hannah Torr Drum of Philadelphia depicts a young girl wearing a white empire dress with puffed sleeves and measures 7 1/2 inches by 5 1/2 inches. Another is of a young woman of Lancaster in a pink dress and is pictured in Beale’s Jacob Eichholtz, 1776-1842, Portrait Painter of Pennsylvania, page 282. 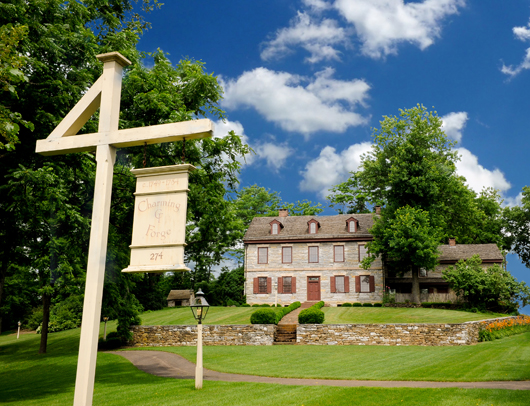 Charming Forge Mansion … at a glance

Charming Forge Mansion, located in Berks County, Pa., is nestled atop a hill overlooking a site that once buzzed with industrial activity. The forge is closed, but the mansion still looks out over the Tulpehocken Creek.

Originally called Tulpehocken Eisenhammer (Tulpehocken Iron Forge) when it was built around 1749 by John George Nikoll and Michael Miller, Charming Forge was given its present name by William Henry Stiegel and Michael Gross who acquired the forge around 1763. The forge was produced as much as 300 tons of bar iron per year, iron which was sent to buyers as close as Philadelphia and as far away as London. Stiegel squandered his wealth and, in the process, lost his ownership of the forge. In 1773 the forge was sold at public auction and was bought, in part, by ironmaster George Ege, Stiegel’s nephew. By 1780 he was the sole owner overseeing operations and he lived in the small stone home that overlooked the forge. The original home on the site had been built in the mid 1700s, but between 1780 and 1784 Ege built a massive addition creating Charming Forge Mansion.

The forge and furnace properties passed through many hands over the decades that followed Ege’s death. In 1993 The Berks County Conservancy, whose mission is environmental and historic preservation, purchased the property in partnership with two conservation buyers, Richard Levengood and Earle “Chip” and Yvonne “Vonnie” Henderson, at public sale in December 1993 to protect it with conservation easements to limit future development.

The Hendersons purchased the mansion and surrounding land and for almost two decades have painstakingly restored it to its original late 1700s Georgian appearance and maintain its historical integrity. They consulted experts and examined the home in detail before beginning their restoration work. The house was structurally perfect and only minor architectural changes had been made since the home had first been built. These changes were “fixed” by the Hendersons to bring the home back to its original state and included exposing covered up fireplaces, removing the Victorian-era porch, replacing several windows, as well as many other projects. The Hendersons also decorated the restored mansion with a mix of period pieces dating from 1760-1790 giving it a true late 18th-century appearance. The result is a spectacular home and a beautifully preserved piece of our history.

The restoration of Charming Forge Mansion is complete and after more than a decade of enjoying the results of their labors the Hendersons are ready to pursue new interests. Their beautiful home is for sale and the couple is excited to find a new owner who will enjoy and maintain the beauty of this “charming” piece of Pennsylvania’s history. On Oct. 1, Pook & Pook Inc. Auctioneers and Appraisers will have the pleasure of presenting the Hendersons’ remarkable and extensive collection of period antiques that they used to furnish their celebrated home. 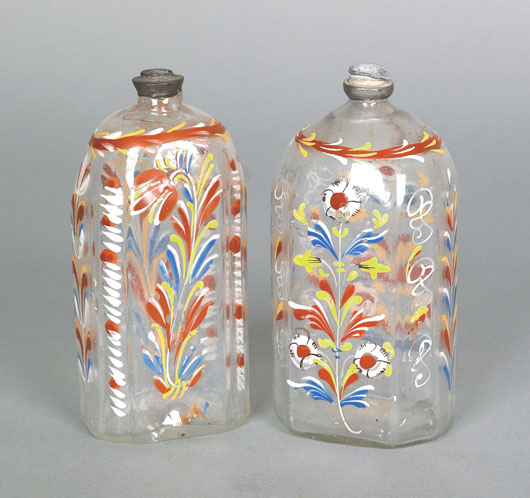 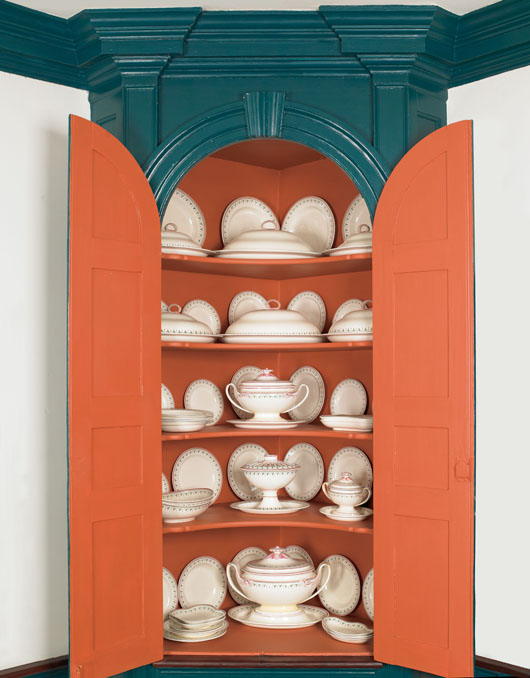 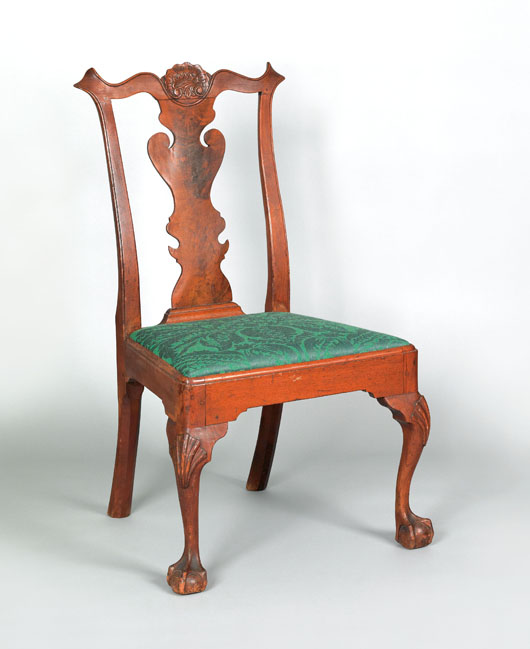 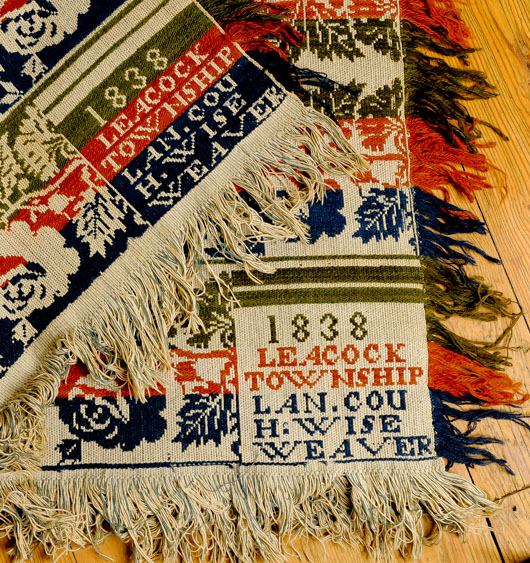 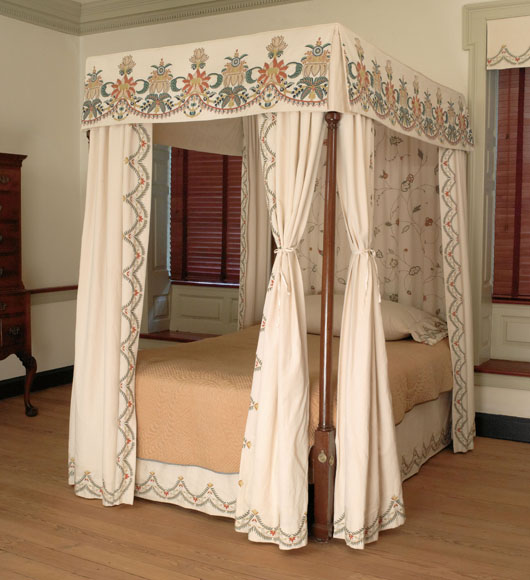