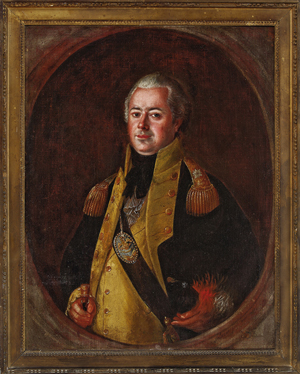 NEW ORLEANS – Rare 18th century American and British portraits will be among the many highlights of Neal Auction Co.’s three-day Louisiana Purchase Auction, which is scheduled this year for Nov. 22-24.

The works of José Francisco Xavier de Salazar y Mendoza offer the world a rare glimpse at material culture in Spanish Colonial Louisiana. By 1782, when Salazar had arrived in New Orleans from the Yucatán, he was already a mature artist. Census records from 1791 list only two other painters in New Orleans, about whom virtually nothing is known and from whom no works survive. Only Salazar’s paintings exist to provide the world with a rare glimpse into the ways of life in Spanish Colonial Louisiana.

Neal Auction Co.’s Salazar portrait portrays of one of the nation’s most storied and interesting historic figures, James Wilkinson— a hero, a soldier, an adventurer and a spy. Wilkinson was a soldier in the Continental Army during the Revolutionary War. He was the fifth and the eighth Commanding General of the United States Army. With Aaron Burr, Wilkinson developed a plan for secession, and then later, denied his own involvement. He was appointed the first governor of the Louisiana Territory, and, after his death, Wilkinson was discovered to have been a paid agent of the Spanish Crown.

Neal Auction Co.’s portrait of Gen. James Wilkinson features an interesting pictorial record of an exceedingly rare presidential “Indian Peace Medal” and, in so doing, offers new evidence of regalia worn by officers of the early republic. In seeking to mark his promotion to general of the U.S. Army on June 25, 1799, Wilkinson commissioned Philadelphia silversmith Joseph Richardson Jr. (1752-1831) to create a special badge replicating the Indian Peace Medals given by George Washington and John Adams to influential Native American chiefs for securing the allegiance of their nations.

The Salazar portrait of Gen. James Wilkinson comes to Neal Auction Co. through unbroken descent in the family of the sitter. It has not been seen by the public since 1865.

Another significant 18th century American portrait featured in Neal Auction’s Louisiana Purchase Auctio is lot 185, a circa 1790 painting of “Henry Howell Williams (1736-1802),” which is attributed to John Johnston (American/Boston, 1753-1818). The portrait, which is being sold with two lagniappe items—12 buttons from the sitter’s coat and an 1858 lithograph of the painting by J. H. Buford—is conservatively expected to bring $3,000 to $5,000. Like the Salazar portrait of Wilkinson, this portrait descended in the family of the sitter until the 1950s when it, the buttons, and the lithograph were acquired by the Connecticut dealer Kenneth Byard, who sold it to Earle Williams Newton II, from whose estate the group comes to Neal Auction Co. The Johnston portrait of Henry Howell Williams has been extensively published with various colorful attributions including that of artist John Henry Buford and that of artist Gilbert Stuart. The attribution to John Johnston, the prominent Boston portrait painter, was established by Alan Burroughs (1897-1978) of the Fogg Art Museum at Harvard University and has been further corroborated by other known portraits by the artist bearing unmistakable similarities.

The sitter is Henry Howell Williams, a prominent Boston merchant and landowner who served as commissary sergeant of the Continental Army, and on whose extensive estate on Noddle’s Island in Boston Harbor took place “the second battle of the Revolutionary War” on May 27 and 28, 1775.

Over the past half-century it has become increasingly acknowledged that Allan Ramsay “certainly ranks among the major figures” in British painting, and that the introduction “of the Italian grand style to British portraiture was primarily the achievement of Ramsay” (Waterhouse, 1953 et seq.). His assured draftsmanship and panache established Ramsay as the leading British portrait painter of his day, with immediate and exalted patronage. In his first year of independent practice (1738-39), he painted the Dukes of Argyll and Buccleuch, the Duchess of Montrose, and the present, enchantingly beautiful noble portrait of Sarah Metcalfe Affleck. Ramsay went on to become Principal Painter in Ordinary to King George III, who acceded to the throne in 1760.

Neal Auction Co.’s picture is prominently labeled “Sarah Metcalfe / Married John Affleck Esq.” The sitter was the daughter of James Metcalfe of Roxton Hall, Bedfordshire, who in 1739 had just married John Affleck (1710-1774) of Dalham Hall, Suffolk, a graduate of Christ Church, Oxford, who was shortly to commence a quarter-century of service in Parliament. Sarah Affleck’s wonderful costume in the portrait is worthy of note: the enormous ruby that she wears as a brooch on her bodice and the copious ropes of pearls, which ornament every element of her dress and coiffure, represent the height of fashion.

David Martin studied under fellow Scottish artist Allan Ramsay, portraitist of the London elite. By the 1760s, he was Ramsay’s chief assistant, and in 1767, he had set up his own lucrative practice in London, later relocating to Edinburgh. Martin was the leading portrait artist working in the Scottish capital until his retirement in the early 1780s.

Neal Auction Co.’s portrait of John Ross was purchased in the 1880s by a tobacco baron in North Carolina; there it remained in the same family until 2006, when it was acquired by the present consignor.

The sitter, John Ross (fl. 1762–1789), was a decorated Scotsman in the British Army, who served as a lieutenant, a captain, and a major in the 34th “Regiment of Foot.” Among his many commissions, following the Treaty of Paris, Ross was sent from New Orleans to the Illinois Territory to demand the surrender of Fort de Chartres, the last outpost under French control, and to negotiate peace with the Ottawa Indians, who resisted British rule. During this expedition, he made a map of the route up the Mississippi River from Louisiana to Fort de Chartres. (The map is being offered in the auction as the following lot.)

In the David Martin portrait, Ross is depicted as an elite officer: the cap and cartridge pouch on the upholstered chair are distinctive of his company, and the framed landscape painting of a river scene behind him is believed to represent his Mississippi River explorations.

Lot 512, Lieutenant John Ross’ (fl. 1762–1789) map of the Mississippi River, is of the few large format maps of the Mississippi published during the 18th century. Ross’ map was the first official English survey of the Lower Mississippi, and one of the most historically significant American maps. It delineated the British gains from France in the French and Indian War and later, was used to establish the western boundary of the new United States.

“Course of the River Mississipi [sic], from the Balise to Fort Chartres; taken on an expedition to the Illinois, in the latter end of the Year 1765. By Lieut. Ross of the 34th Regiment: Improved from the Surveys of that River made by the French” is expected to achieve between $4,500 and $6,500. 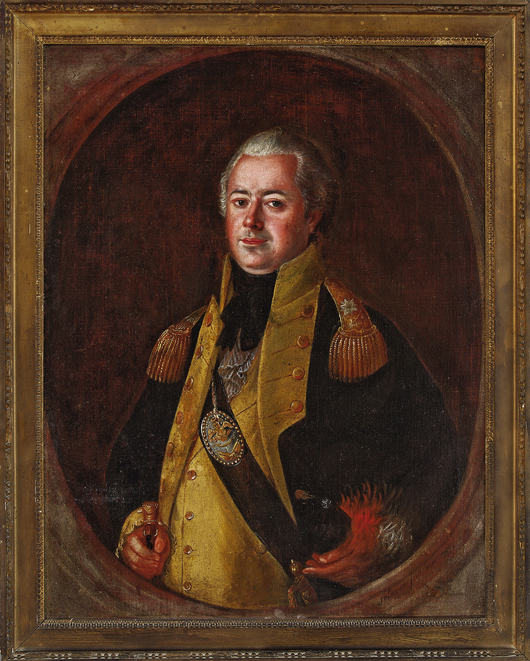 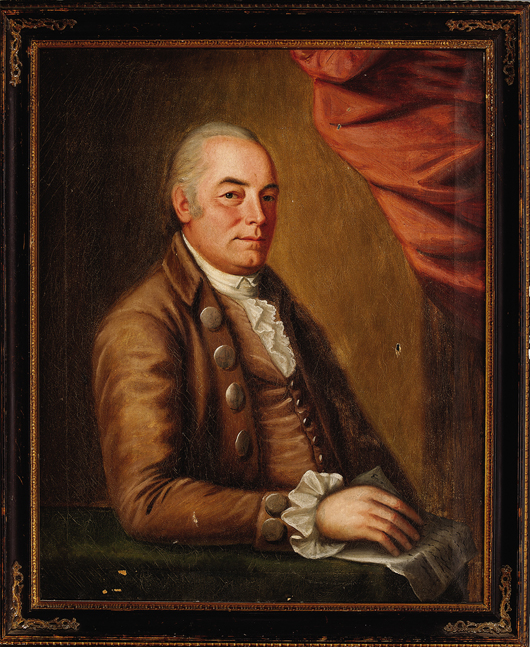 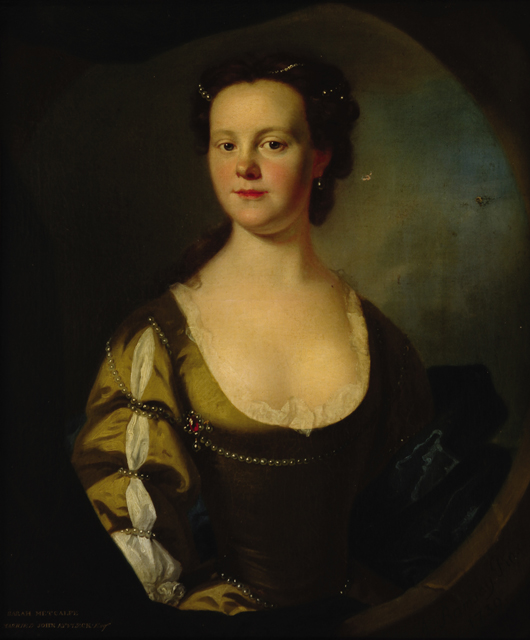 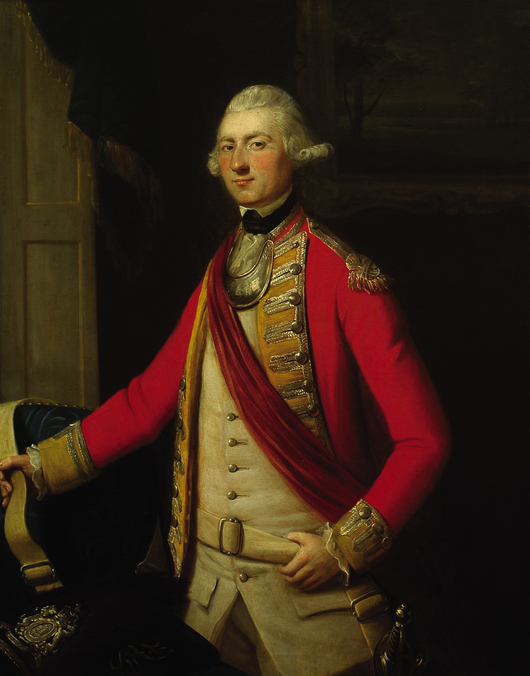 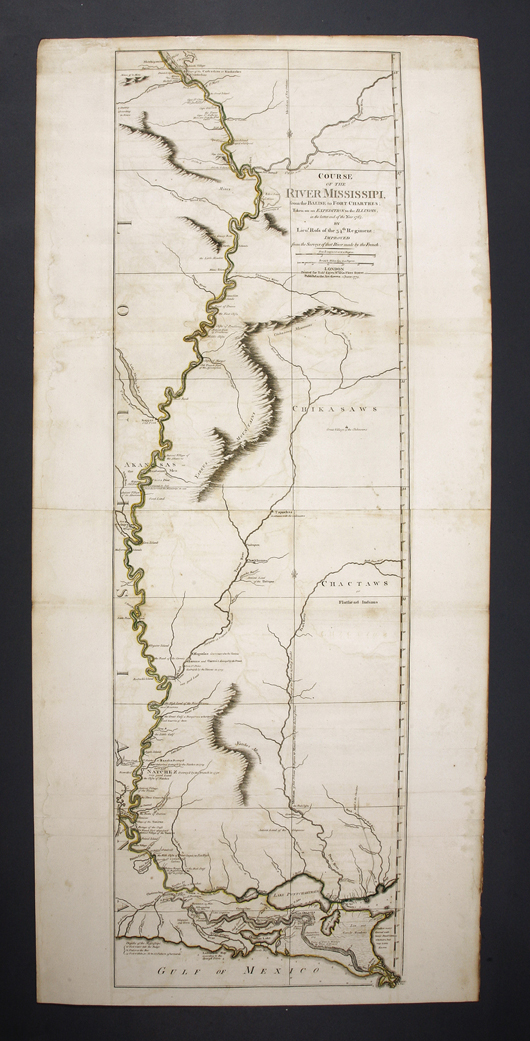 Star sapphire shines in constellation of jewels at Gray’s, Nov. 25
Scroll to top