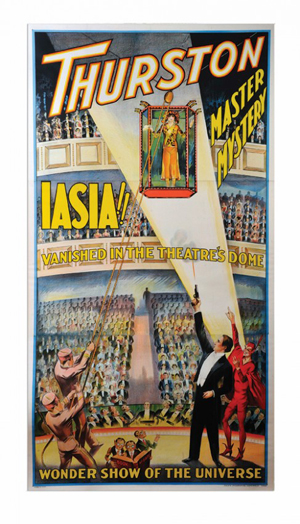 CHICAGO – Tom Mullica is one of the most unusual entertainers in the world. In the 1970s and ’80s, The Tom-Foolery Magic Bar Theatre was a haven for celebrities, magicians and fun-seekers of every description. Mullica performed there nightly, and developed a legendary reputation as a world-class clown, comic, and magician.

Among Mullica’s most famous routines were his “Nicotine Nincompoop” act, in which he ate an entire pack of Lucky Strike cigarettes – while they were still lit. The routine put Mullica on dozens of international TV shows, among them Late Night with David Letterman, and drew thousands of patrons to the bar in its decade long existence. Now memorabilia from the Tom-Foolery will go up for sale on May 22 at Potter & Potter Auctions in Chicago.

The auction will include the cigarette cases and tricks Mullica used at the bar and on stage, as well as many of the framed photos, posters, and souvenirs from the walls of the bar, and his personal library of books on magic tricks. Among these is his own copy of The Encyclopedia of Cigarette Tricks (est. $400/$600), the book from which he learned many of his greatest tricks.

The auction will also feature vintage magic tricks, illusions and apparatus from other consignors. Among them are antique trunks and illusions from the Will Rock/Thurston illusion show, which toured America in the 1930s and ’40s. One such item is the “Glass Lined Trunk” used by Rock. After showing the trunk empty and lining its interior with sheets of glass, a girl appeared inside. The trunk – which carries an estimate of $700-$1,000) – is still in the bright orange packing crate Rock used, its lid emblazoned with the words “Will Rock/Thurston Show.” Another highlight is a pair of handcuffs owned by the best-known magician of all time, Harry Houdini. The set of “Bean Cobb” cuffs carries an estimate of $3,000-$4,000.

Other magic props in the auction include an elaborate Vanishing and Appearing Lamp set similar to props used by Houdini (est. $4,000/$6,000), stainless steel and Lucite props manufactured by Merv Taylor (who also operated one of the first concessions at Disneyland), an unusual poster advertising Chung Ling Soo (est. $4,000/$5,000), several elaborate automatons, and other “devices of wonder” built by many well-known American craftsmen.

An illustrated catalog will be available from the auction house.

Chinese vase sells for $1.5M at US auction
Scroll to top