NEW YORK – A collection of precious jade jewelry and ceremonial items in hues as varied as the colors of a spring forest leads Gianguan Auctions’ June 25 sale. The color story extends throughout an exceptional collection of Chinese ceramics with glazes of Famille rose, copper red, cobalt and celadon. Classic scroll paintings, both muted and bold, by ancient and modern market leaders wrap up the annual summer auction.

Certificates of gem identification authenticate the natural color of many of the jade items. The day’s marquee item is a pair of white jade quail boxes just two inches tall and of the Qing Dynasty. Symbols of harmony and peace, the figures display distinctive beaks, highly articulated wings and webbed feet. The pair is Lot 122 and has an of $40,000-$60,000.

Also Qing is a rare pair of celadon green jade Mughal style vases with covers (below). The tall baluster form vessels with ruyi handles are carved in low relief with dragon and phoenix amid scroll sprays. The pair is Lot 109 and will command as much as $30,000. Meanwhile, Lot 90, a greenish-white jade vase with cover, also Mughal style but hexagonal in form with scrolling handles, takes the podium at Lot 90. The pair is valued at $6,000-$8,000. 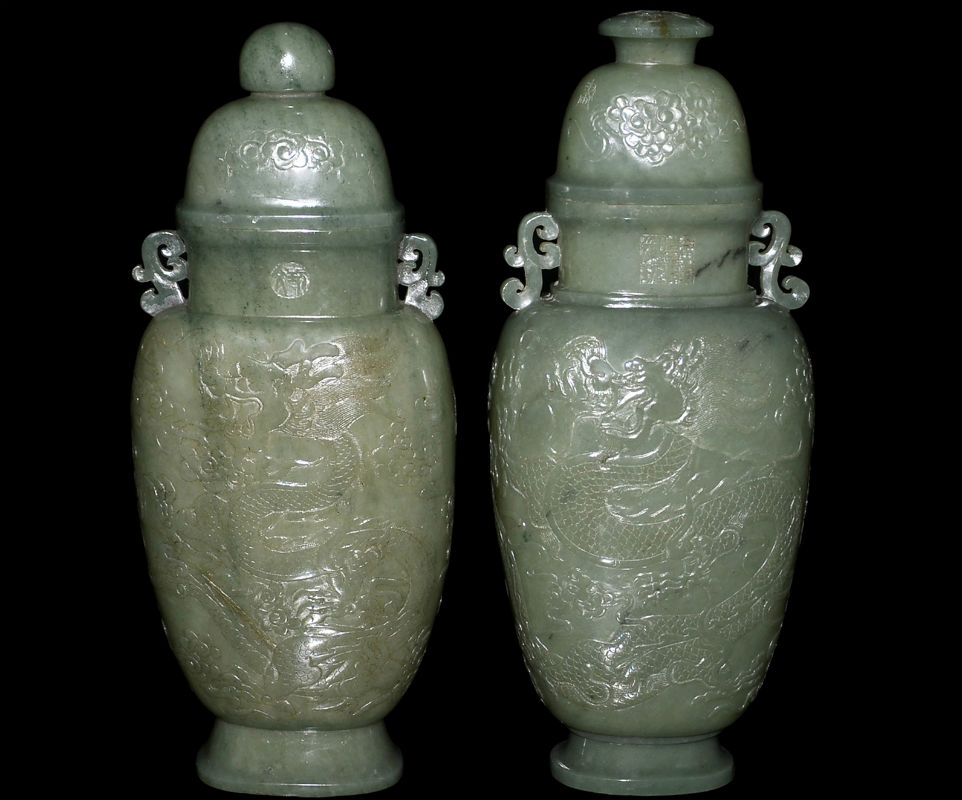 An extensive collection of jade jewelry – bracelets, necklaces, pendants and earrings – opens the sale. Chinese artisans, ever aware of the inherent forms within raw materials, have been able to bring forth wondrous carvings such as Lot 137, a pair of wood carved dragons on cresting waves upholding an imperial seal. The Ming forms, 22 3/4 inches in length, are expected to fetch as much as $5,000.

Porcelains come to the auction in many forms and glazes, many of them rare and important. The catalog cover, for instance, features an 18th century Qing masterwork of form and color unlike any that has come to the podium in recent times. Experts at China Institute in New York have stated that porcelains of the period are notable for the perfection of their bodies and the opaque overglaze enamels that embellish them. Lot 190 (below) is a prime example. The graceful globular form with slender neck is glaced in a vibrant yellow that is consistent and even overall. Were that not sufficient, it is further decorated with carvings of two dragons among ruyi clouds and flames contesting a pearl. A key-fret band encircles the mouth and a turbulent wave encircles the foot. Of the Imperial kiln, it is of period and bears the Qianlong four-character relief mark. Standing 13-inch tall, the vase (below) is conservatively valued at $300,000-$500,000. 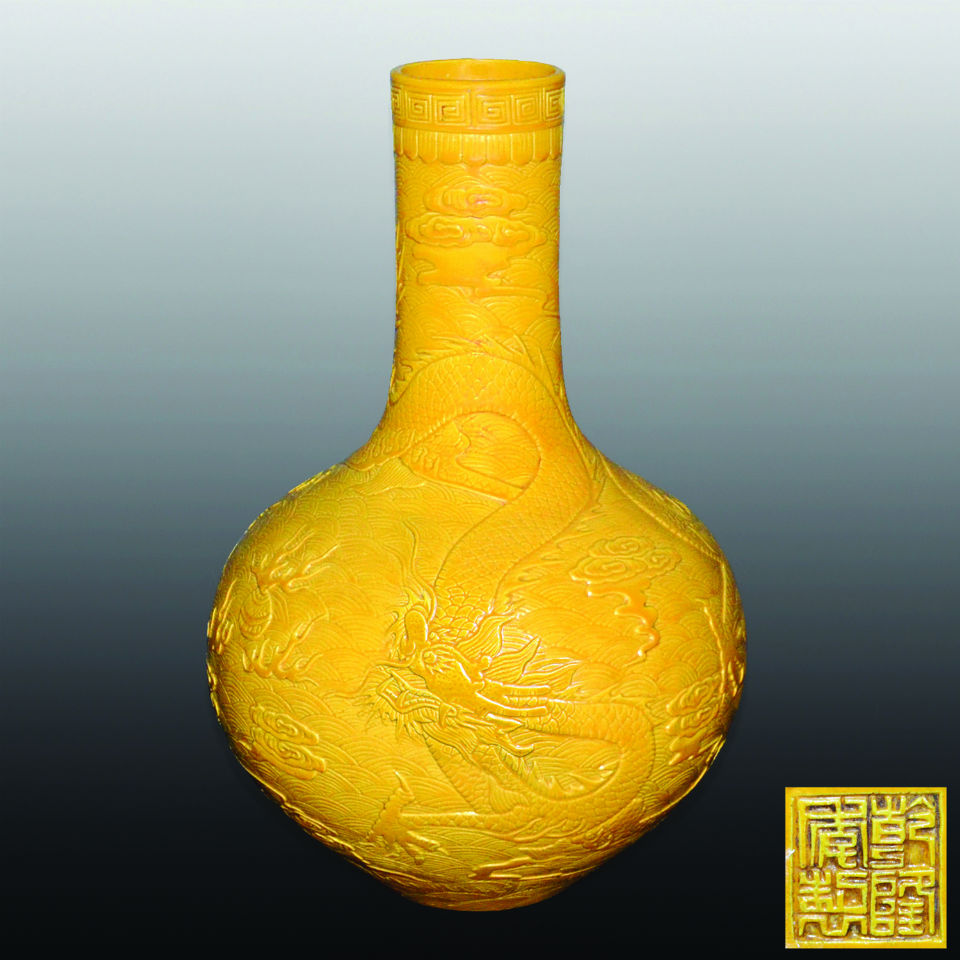 Subtle and stunning, Lot 194 is a numbered Junyao rose-red basin with boss reliefs made exclusively for use of the Southern Song Royal court and similar to one collected by the Shanghai Museum. The inner surface is of signature sky blue with earth worm motifs running freely. The brown glazed bottom has the Chinese numeral Wu (five). The basin is expected to hit $200,000.

The collection of Chinese paintings include abstracts, landscapes and portraits by market favorites. In Lot 77, for instance, Herd in the Wind Reed (below), estimated at $60,000-$80,000, Wu Guanzhong interprets wildly rushing wind through bold splashes of color that nearly obliterate the migrating animals represented by curved splashes of black.

In contrast, Qi Gong’s Lotus in Summer (below) is a dynamically balanced painting that focuses the viewer’s eye on a dark floral base before drawing it upward to a red bud that is but a tease before the payoff of fully blossomed lotus of deepest hue. Dated 1992, the work is inscribed and signed Qi Gong and bears two artist seals. It is Lot 25 and estimated at $10,000-$20,000. 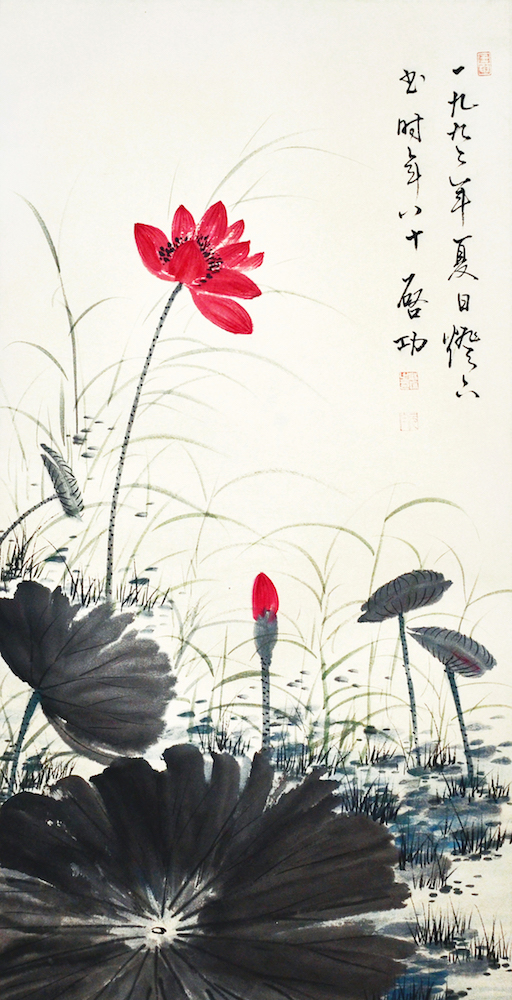 The auction on Saturday, June 25, begins at 10 a.m. Eastern. It will be conducted live at Gianguan Auctions, 39 W. 56th Street in New York City. For condition reports, contact the gallery director at 212-867-7288 or email info@gianguanauctions.com.