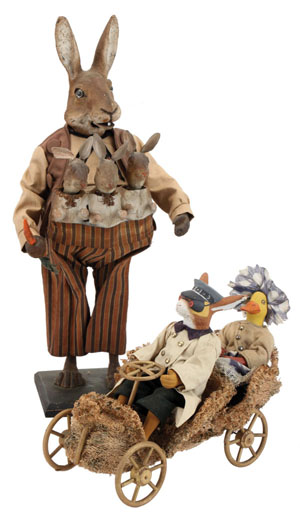 NEW HOPE, Pa. – Last May the Old Salem Toy Museum in Old Salem, N.C., closed its doors for the last time on a spectacular collection of antique toys, holiday items, dollhouses, miniatures and other children’s playthings, some dating to as early as 225 A.D. The collection was built over many years by businessman Thomas A. Gray and his mother Anne P. Gray, members of a highly respected family of North Carolina philanthropists. Both Tom Gray’s grandfather, James A. Gray, and his great-uncle, Bowman Gray Sr., held the position of chairman of the board of R.J. Reynolds Tobacco Company. One would presume correctly that the museum’s toy collection ranked among the very finest of its type.

While the museum is now part of antique toy history after eight years of operation, the collection has one last public appearance to fulfill, which it will do when it is auctioned by Noel Barrett on Nov. 19-20 in New Hope, Pa., with Internet live bidding through LiveAuctioneers.com. Auction proceeds will be used to acquire and conserve Moravian and Southern decorative art objects for the Old Salem Museum & Gardens, a restored 18th-/19th-century North Carolina Moravian community that is part of a National Historic Landmark district.

More than 900 lots will be offered in the Friday evening/Saturday auction sessions, with the main categories including early European and American toys, Erzgebirge carved-wood figures and sets, beautifully outfitted rooms and shops, Christmas and other holiday antiques, desirable German-made miniatures, and doll’s houses.

Noel Barrett explained that when the museum was in its formulative stages, Tom Gray was actively buying American toys. One of the great treasures he acquired was George Brown’s Monitor. “Any aficionado would agree, this ship is an American toy masterpiece,” Barrett said. “It’s one of the most highly prized pieces in the collection and will be auctioned together with an illustration from the George Brown Sketchbook.”

German toys of tin and other metals are highlighted by an incredible 33-inch-long Marklin child-size fire-pumper wagon large enough for two small children to pump simultaneously. It is the only known example, Barrett said. Additional key lots include a lovely clockwork airplane roundabout with Wright Brothers-style bi-planes and a lithographed American flag; and an oversize Fischer Bleriot-style airplane. Among the Marklin boats to be auctioned is a large-size Battleship New York.

At least 10 sets of German painted-wood figures in bentwood boxes reside in the collection, with Barrett’s favorite being a 19th-century Erzgebirge hunting set comprised of a hunter on his horse, a dog, eight trees with tightly curled wood shavings to replicate leafy branches, four deer and a wild boar. Described as being similar to sets depicted in an 1850 book, it is expected to make $8,000-$10,000 at auction. Also noteworthy in the section devoted to wood toys are: one of the most complete Schoenhut Humpty Dumpty Circuses ever to be displayed publicly, at least four different German-made menageries containing a wide array of miniature animals (mostly painted wood), and two rare hand-colored sample catalogs issued by German manufacturers.

“One of the great strengths of the collection is the Erzkebirge and other miniatures made by premier European makers,” said Noel Barrett. “There’s a huge variety of miniatures by Rock & Graner, Evans & Cartwright, and many pieces of what are generically called ‘ormolu’ but recently were determined to have been made by Ehrhardt & Sohne for Marklin.” Within the auction inventory’s many delightful miniatures by Rock & Graner are a jardinière with lithophane and serpentine front legs, and a squirrel cage that Barrett says is “even more elaborate than the one Flora Gill Jacobs had in the Washington Dolls’ House and Toy Museum.”

The collection contains the only known cigar shop/tobacconist room box. Previously, it was thought to have been the work of Rock & Graner, but thanks to the recent publication of a scrupulously researched book on Christian Hacker, it is now almost certain that the tobacco shop was a Hacker design. “It has all the earmarkings of Hacker’s style, which is very distinctive,” Barrett said.

Its interior fittings are “simply magnificent,” Barrett continued. “It has a zinc humidor with marbleized top built into the wall, a Rock & Graner display table full of cigars, and all sorts of tobacco products arranged on the shelves. It’s exactly how a late-19th-century tobacconist’s emporium would have looked. It has marbleized support columns, faux-wood fixtures and cabinetry with numerous opening doors, embossed gold trim, glazed doors, a velvet valance – no detail was overlooked. It even has a Schweitzer chandelier.”

Other room boxes to be auctioned include a millinery shop, multiple Nuremburg kitchens, and a butcher shop previously in the collection of the Mary Merritt Doll & Toy Museum. “When Mr. Gray bought the butcher shop at the Merritt Museum auction, it had a white-painted case. He managed to remove the paint so the case could be returned to its original finish. It’s luscious looking, now.”

One of the grandest of Rock & Graner’s many superlative designs is the museum collection’s circa-1890 oversize tin landau coach measuring 30 inches in length. It features such deluxe realistic details as a folding oilcloth roof, opening doors, plated lamps and spoke wheels.

German-made holiday antiques will be in plentiful supply, including Santa figures and colorful Halloween and Easter rarities. “It’s very difficult to pick a favorite from this collection,” said Barrett, “but the top ten would certainly include the 23-inch-tall hollow Santa with faux-ermine trim and one of the greatest painted faces I’ve ever seen. It’s a very unusual size and simply beautiful.”

Nominated by Barrett as “possibly the best of the Easter lots” is a standing rabbit with three baby rabbits that was formerly in the Mary Merritt Doll Museum collection. “It’s surely one of the most charming Easter toys ever made,” Barrett said.

Those who appreciate the incomparable quality of late-19th and early 20th-century German lithography are sure to be tempted by the two exquisite pop-up books with a circus theme. One of them, made by Meggendorfer, is titled Grand Circus; while the other is a rare Nister book featuring early European-style circus characters.

Uptown real estate to be auctioned includes two lovely Spanish dollhouses. One of them is a duplex house with five sliding panels on the front; the other is a Second Empire townhouse with mansard roof.

Barrett said the Old Salem Toy Museum and Thomas A. Gray collection will attract the buyer who goes for quality and European artistry. “Toys of this type just don’t come to the auction market,” he observed.

For additional information, call 215-297-5109 or e-mail toys@noelbarrett.com. View the fully illustrated catalog and sign up to bid absentee or live via the Internet at www.LiveAuctioneers.com. 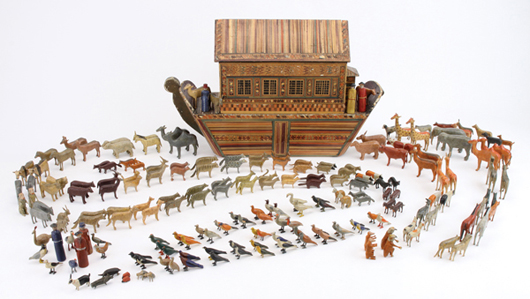 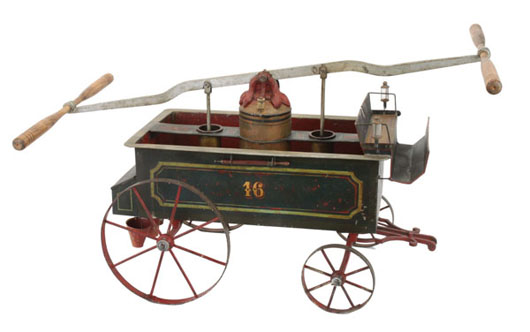 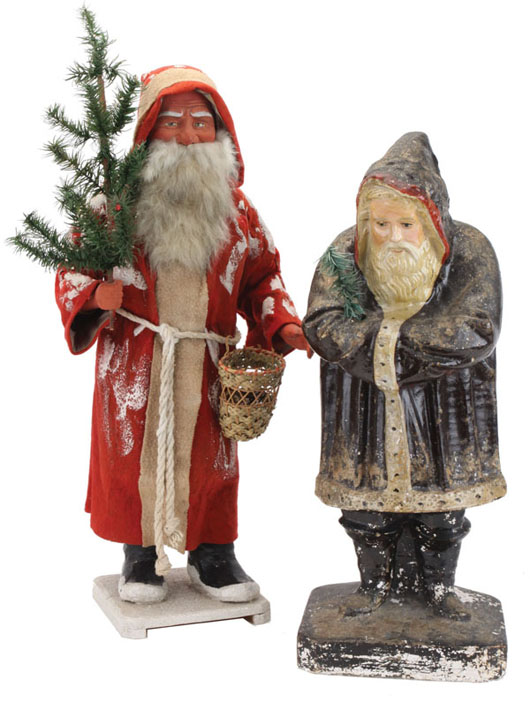 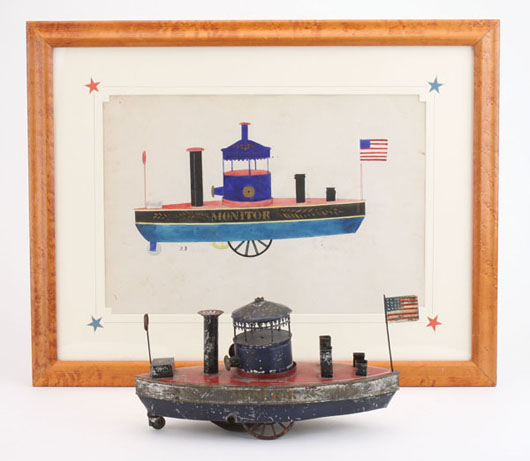 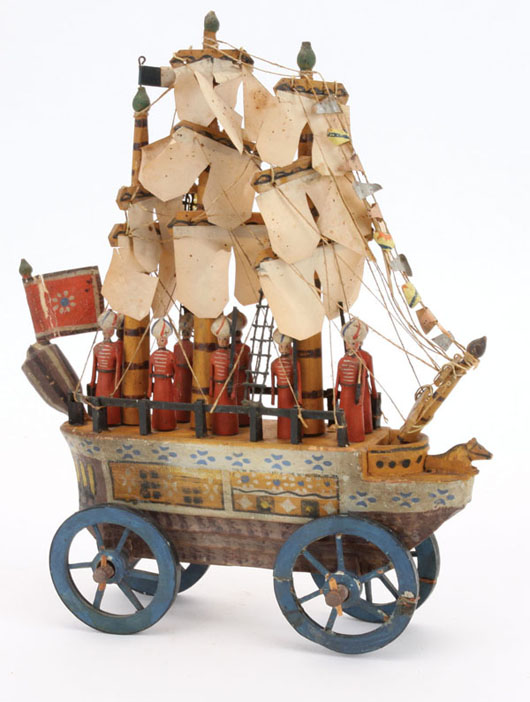 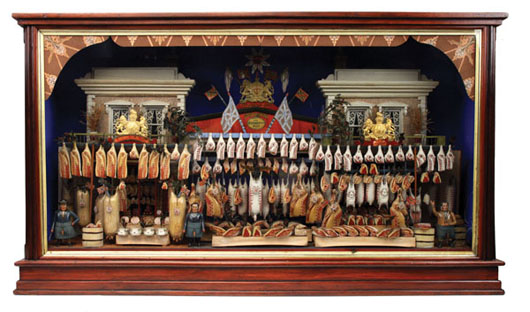 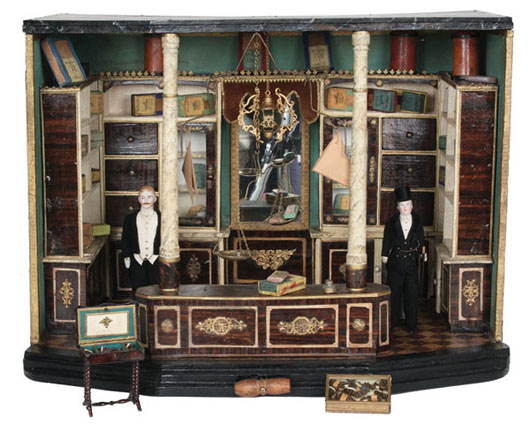