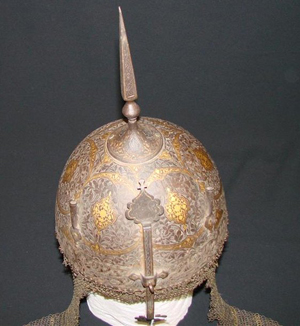 CRYSTAL RIVER, Fla. – Rare items, including a 19th-century Indo-Persian battle helmet, a punched tin pie safe made exclusively for General Foods and a sterling silver veilleuse-theiere teapot will cross the auction block Feb. 27 beginning at 10 a.m. Eastern. These items as well as many other fine antiques, art and collectibles will be auctioned at Professional Appraisers and Liquidator’s first sale of the year. LiveAuctioneers will provide Internet live bidding.

The huge winter season antique auction will be conducted by Charles Fudge of Professional Appraisers & Liquidators at the firm’s U.S. Highway 19 gallery. Highlights of the auction will be more than 75 lots of 19th- and 20th-century American and European Art, as well as more than 100 lots of antique furniture to include Victorian, period, primitive, with a sprinkling of Mid-Century Modern. As always, estate jewelry will also be a main feature, with more than 100 lots of gold and diamond jewelry, including many fine Art Deco pieces. Other items of interest are an early 19th-century sampler, lamps including hanging oil lamps and table lamps by Sale Brothers and Bradley & Hubbard.

Furniture highlights include a Federal period two-part corner cupboard believed to be of Pennsylvanian origin. Also attributed to Pennsylvania is a butternut jelly cupboard with locking doors and drawers. Of Southern origin is a walnut sugar chest from the early 1800s with a fishtail-hinged lid and dovetailed case and a 19th-century oak harvest table with breadboard ends. Mid Century Modern furniture will include chairs designed by Ray and Charles Eames and manufactured by Herman Miller and a complete dining room suite by Bernhardt.

Auctioneer Fudge said, “Of all the furniture, the piece I am most excited about is the, possibly one-of-a-kind, punched tin pie safe made exclusively for General Foods Co., with the corporation’s logo of ‘G.F. Co’ molded into the tin panels on each side.”

Another item considered rare is an Indo-Persian battle helmet dating to pre-1850, which has its gorgeous damascene or gold inlay decorations still very much intact. Helmets like this are hard to find, especially with the gold intact. “This is near museum quality, and since there has been an increase in collectors of Indo-Persian battle armor, we expect strong bidding on this item,” said Fudge.

Fine art includes paintings, etchings, prints and statues. Paintings by American listed artists include Arrival of Spring by Andrew Thomas Schwartz, a landscape by Ernest Parton, a coastal landscape titled Turn of the Tide by Charles B. Vickery, an oil on canvas entitled Ancient Quarter by Frank A. Brown, a landscape by Peter Edward Rudell and an Alaskan scene by Leonard Moore Davis, noted landscape painter, muralist and illustrator with a specialty in Alaskan scenes dating back to the 19th century.

European art enthusiasts will enjoy a 19th-century painting depicting boats on a lake at sunset by British artist James Francis Danby, a watercolor entitled Floral Arrangement by Russian artist, Boris Vassiloff, and two 19th-century oil on panel paintings by Italian Gaetano Mormile, whose works were included in Sotheby’s Old Master and 19th-century European Art Auction. Also of note, is the oil on canvas painting, Standing Nude by Hungarian American portrait artist Pal Fried. Fried is noted for having painted celebrities such as Will Rogers, Marilyn Monroe and the Gabor sisters. In addition to bronze statues by listed artists Madeline LeFabre and Eugene Antoine Aizelin, both French, are cold painted Vienna bronzes by Franz Bergman, which include lizards and an outstanding cobra. Ivory statues include a polychrome ivory woodsman and Oriental lady.

Among the American art pottery will be Roseville including a scarce pink Snowberry vase. However, the highlight of the pottery category is sure to be the Weller jardiniere and pedestal in the Baldin (Apple) pattern, an item can be quite difficult to find.

Sterling silver will cross the block as well, coming from famous silversmiths such as 18th-century George Schofield in the form of a Georgian gadrooned sauce boat bearing a 1789 mark, and 19th- century Holland Aldwinckle & Slater’s glorious repousse two-handled centerpiece bowl, which is one of the finest the auctioneer has seen. Most unusual is the Gustave Keller 950 fine French silver Arts and Crafts version of a veilleuse-theiere, complete with tea strainer in the spout of the individual teapot. The word “veilleuse-theiere” loosely translates to a nightlight teapot. According to An Illustrated Dictionary of Silverware by Harold Newman, 1987″ they were originally made to be used at the bedside to keep food warm for a invalid or an infant, the veileuse was similarly used in the bedroom for keeping warm a beverage for one person.

“We expect a nice in-house crowd, coupled with Internet bidders,” said Fudge. “When you have outstanding, fresh-to-market antiques and collectibles, people will buy no matter what the economy. If the economy is weak, people look harder for a good buy, and let’s face it; we have some unique items in this auction that collectors may never see again. They’ll want to seize the moment.” 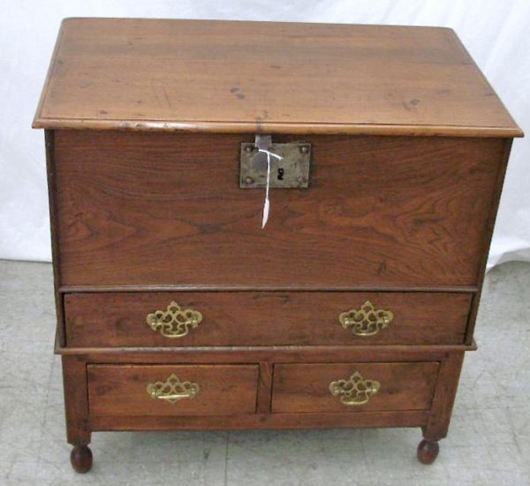 A rare Southern original, this sugar chest/cellaret on stand dates to 1820-1840. It is walnut with secondary pine. With replaced hardware its estimate is $2,500-$4,500. Image courtesy Professional Appraisers & Liquidators LLC. 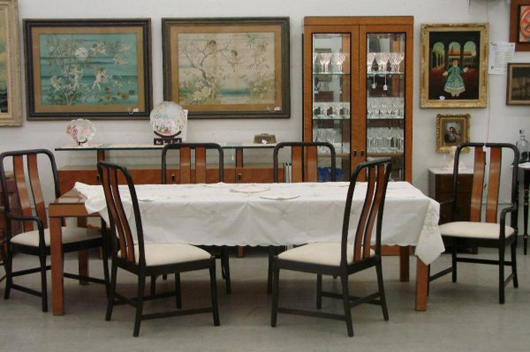 This signed Bernhardt dining room set with bird’s-eye -maple finish has 11 pieces including a lighted china cabinet and buffet. With a retail value in excess of $8,000, the auction estimate is $2,000-$3,000. Image courtesy Professional Appraisers & Liquidators LLC.

Tenn. Supreme Court will not hear case on Fisk art
Scroll to top