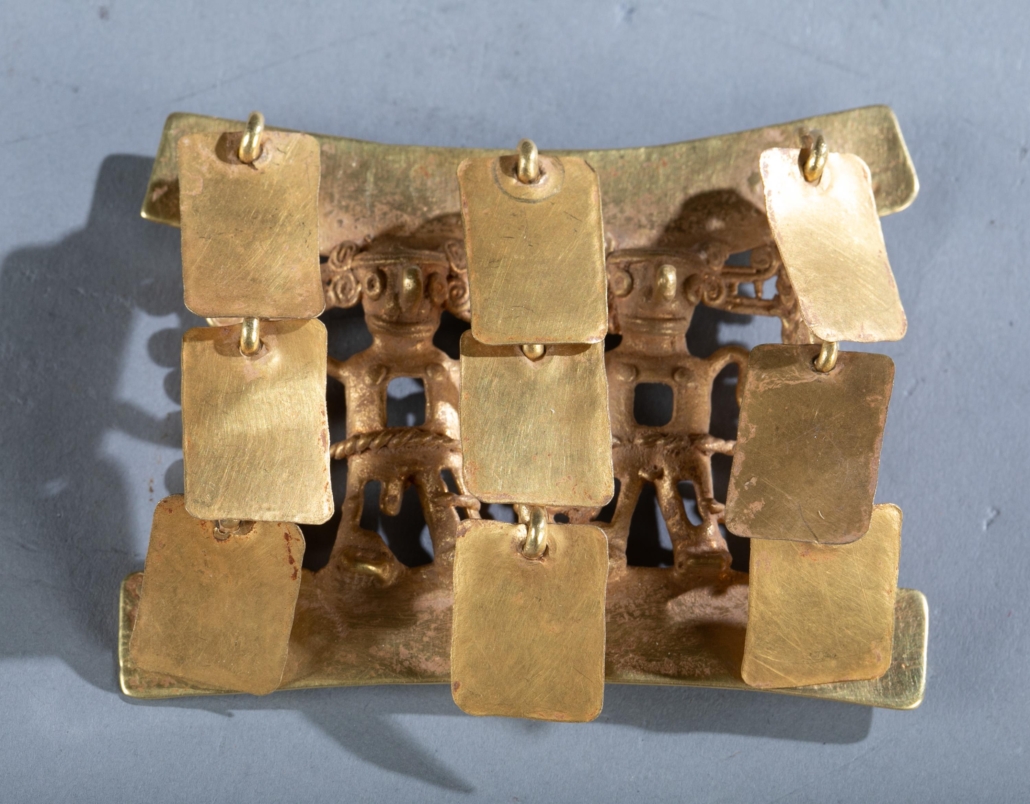 FALLS CHURCH, Va. – On Thursday, Nov. 4, Quinn’s Auction Galleries will conduct an Arts of the Americas auction from its popular Collector Series. The 145-lot specialty event features a collection of Pre-Columbian, Native American and Central American objects that include pottery, sculpture, gold, textiles, baskets, paintings and Guatemalan folk santos. Absentee and Internet live bidding will be available through LiveAuctioneers.

Among the auction’s highlights are a group of Diquis and Veraguas pendants, a Doug Hyde sculpture titled Grandma’s Goat Thinks He’s a Dragon and an assortment of 20th-century Maximon figures.

Leading the lots is a 22K gold Diquis pendant from Costa Rica, estimated at $7,000-$8,000. The Diquis culture flourished from 700-1530, and its people formed part of the Greater Chiriqui culture that inhabited a substantial region that spanned from southern Costa Rica to western Panama. The Diquis are known for their stone spheres and masterful gold designs. The pendant consigned to Quinn’s weighs 129.6 grams and depicts two figures standing within a framework of linked gold rectangles. Like many of the gold pieces in the auction, it comes with provenance from the Ehrich Locke family. 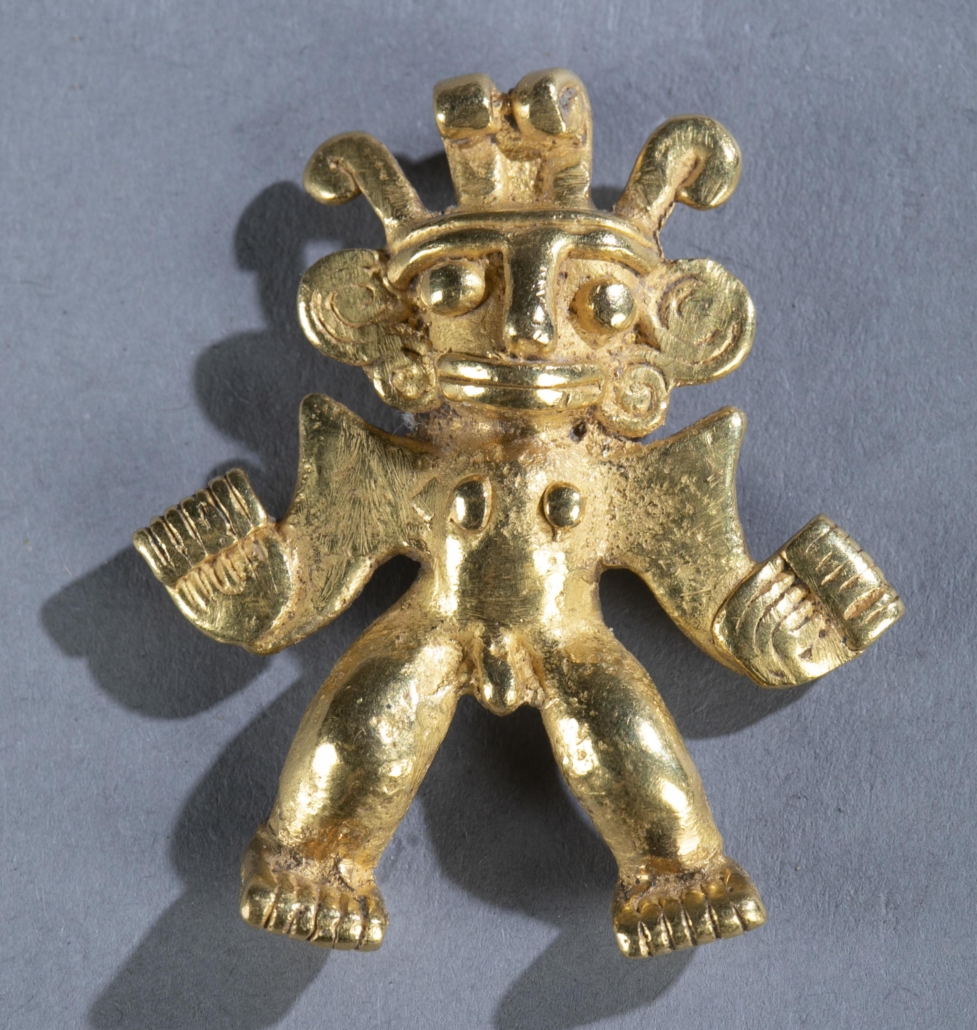 A number of other important pendants follow, including a 22K gold Diquis pendant of a figure in a “feathered” headdress, weighing 20.7 grams and estimated at $1,000-$1,500; and two designs from the Veraguas (Costa Rica) culture, whose goldsmiths were known for the high quality of their workmanship. A 14K gold example depicting a mythical two-headed creature weighs 72.9 grams and is estimated at $2,000-$4,000, while an 18K gold pendant in the form of an antlered animal, which weighs 38 grams, is expected to make $1,500-$2,000. 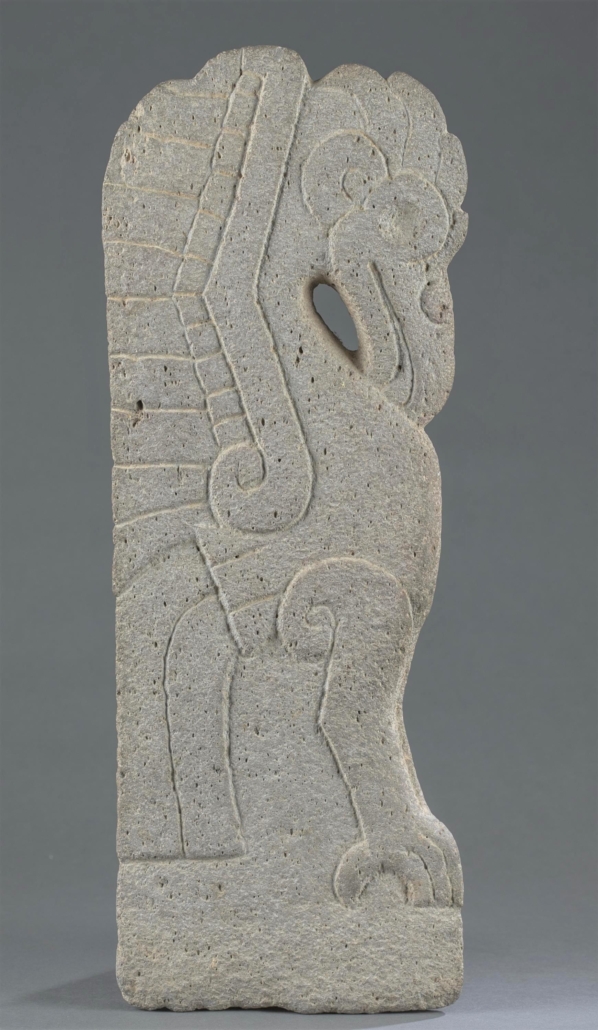 A fascinating backstory explains the design and form of a Veracruz (Mexico) stone palma dating to 600-900. So named because of their palm-frond shapes, palmas were worn by players as part of their elaborate regalia in a ritualistic Mesoamerican ballgame. The palma would attach to a stone yoke worn around the waist to protect the player’s chest and vital organs. Often, the motifs carved into palmas correlated with the game’s theme of sacrifice. The palma in the November 4 sale is carved in bas relief to resemble the profile of a bird. From a Texas private collection, it is estimated at $4,000-$8,000. 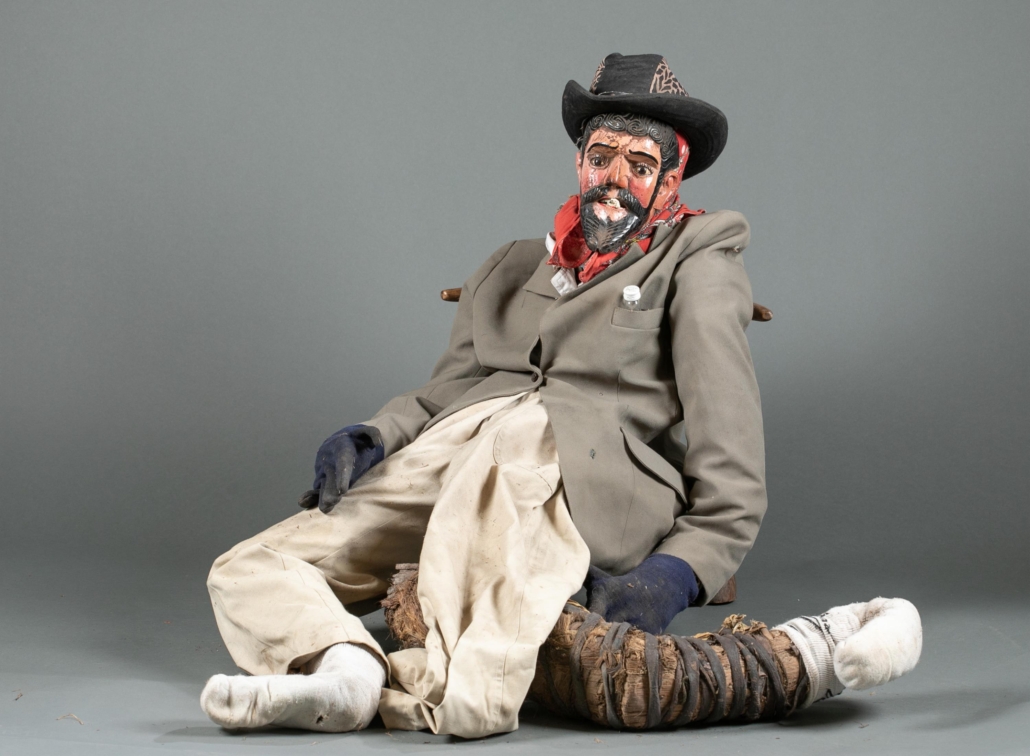 A total of 31 individual and group lots consist of Maximon/San Simon figures from Guatemala. Maximon – also called San Simon – is a deity and folk saint represented in various forms by the Maya people of certain towns in western Guatemala. The traditions behind the figures go back centuries within the culture. According to some legends, Maximon was never a man, but rather a wooden figure created by shamans to defend their villages. As the story goes, Maximon resorted to trickery to harm the people of the village, so the shamans twisted his head around and broke his legs to stop him. After learning his lesson, Maximon got back on the right track and started protecting the villagers from evil. Elements of this folk tale explain the unusual nature of some of the figures offered by Quinn’s. 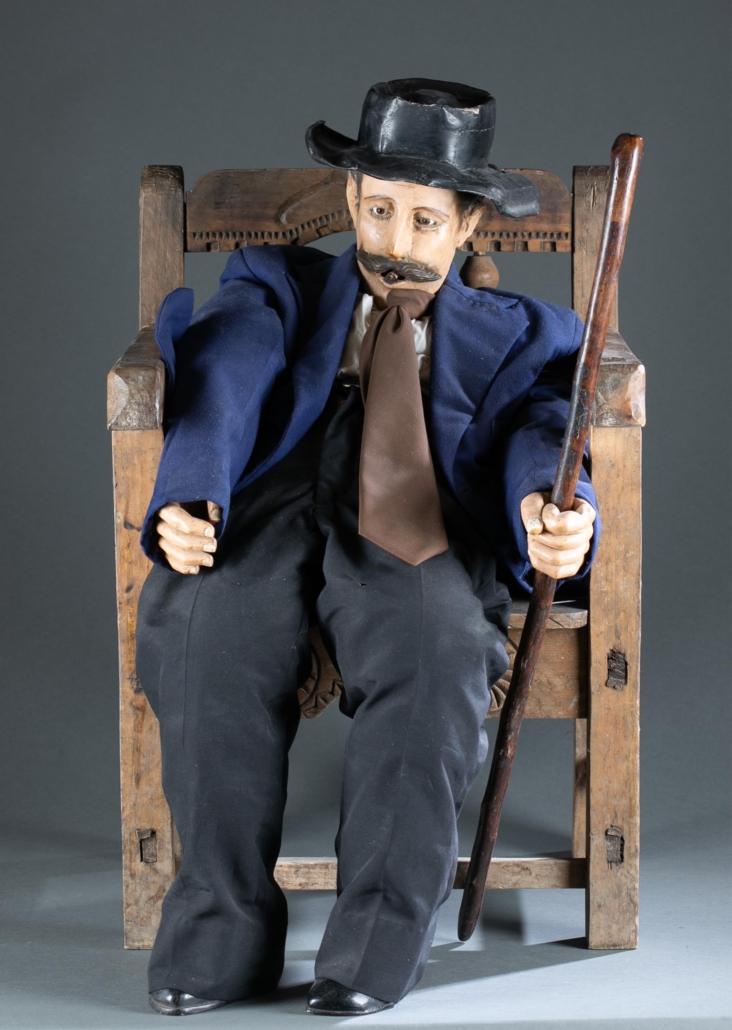 One example wears a Maximon mask, has a cigarette (considered an offering) between its lips and, similarly, a liquor bottle tucked into its jacket pocket. Its pre-sale estimate is $1,000-$1,500. Another Maximon/San Simon “smoker,” crafted in the 20th century of wood, pigment and textile, is seated in a wood chair and estimated at $800-$1,200. A third figure also sits in a chair, holds a walking stick and has a cigar (offering) in its mouth. Made of wood, pigment, textile and glass, this 20th-century creation is estimated at $1,000-$1,500. 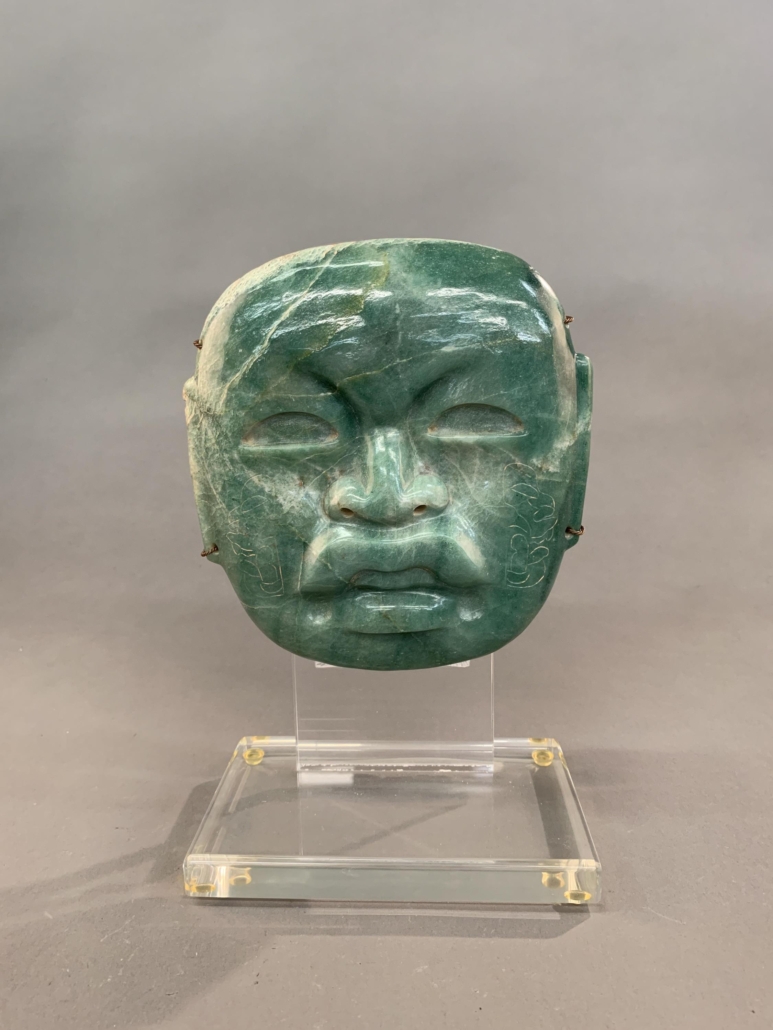 Artifacts from the earliest major Mesoamerican civilization – the Olmec people – are highly desirable and collected around the world. Unlike the Maya and Aztec cultures that came later, very little is known about the Olmecs’ origin. It is believed that they occupied Veracruz (Mexico) as early as 1500 BCE and were extinct by 400 BCE. The mesmerizing faces on Olmec stone heads and figures continue to intrigue historians and archaeologists, while antiquities collectors seem particularly interested in Olmec masks. There are four lots of Olmec-style jade masks and pendants in the auction, all sourced from a Texas private collection. One carved green jade face is unusual in that it has incised drawings on its cheeks. This imposing artwork with its included mount is expected to attract a winning bid of $1,000-$1,500. 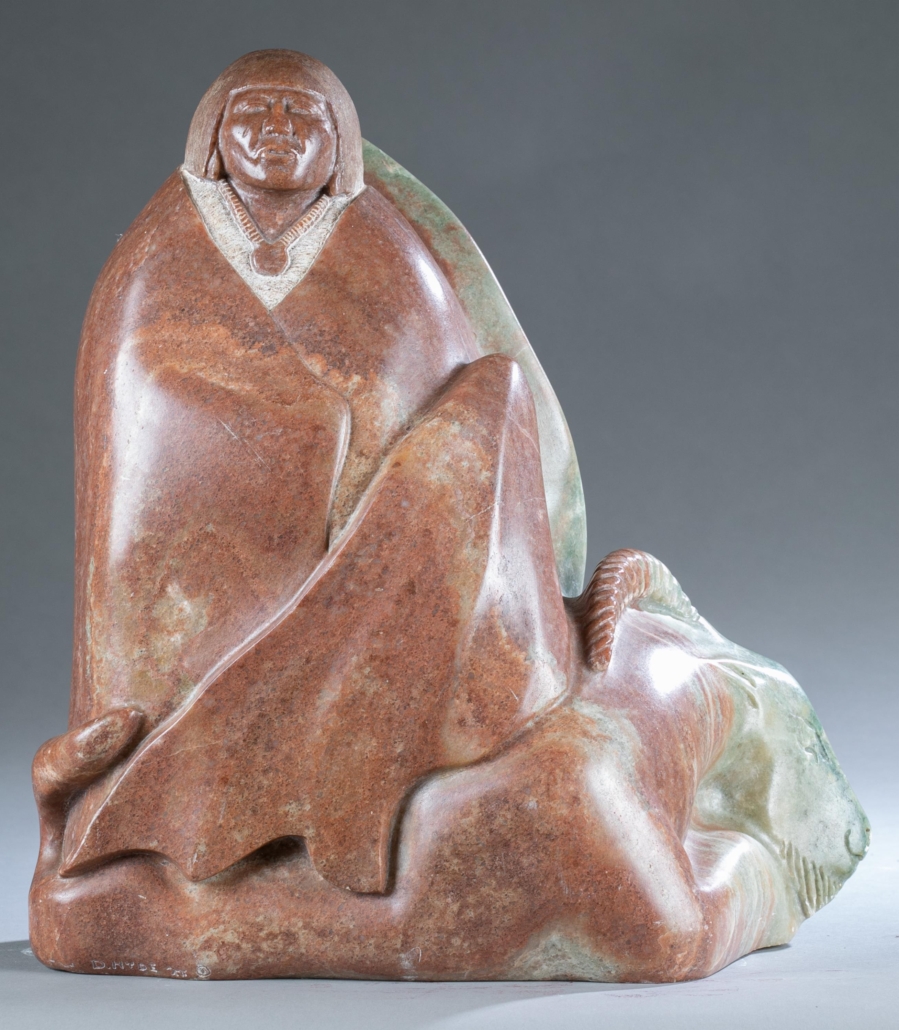 A contemporary stone artwork by Oregon artist Doug Hyde (b. 1946-), titled Grandma’s Goat Thinks He’s a Dragon, was created in 1983. It is artist-signed on the front and comes with prestigious provenance from a Washington, DC private collection and, before that, Louis Newman Galleries in Beverly Hills, California. It is estimated at $1,000-$1,500. 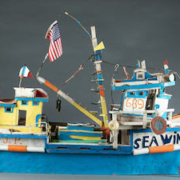 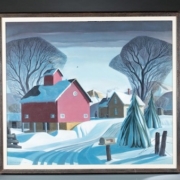