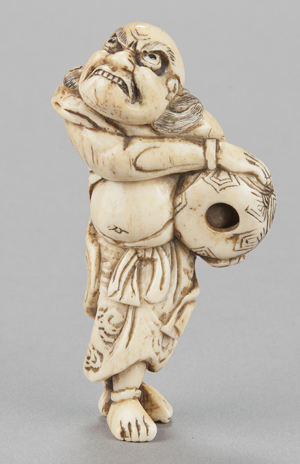 FALLS CHURCH, Va. – Netsukes – the miniature carvings used in Japan as ornamental fasteners on boxes and silk robes – have been a high-end niche collectible in the United States for many decades. Intricately detailed netsukes have won the favor of a number of distinguished collectors, including the late diplomat Jack A. Mang and his wife Helen Randall Mang, whose estate collection will be auctioned at Quinn’s Auction Galleries on Friday, Dec. 7, 2012. Internet live bidding will be provided by LiveAuctioneers.com.

The Mangs were longtime residents of the nation’s capital and founding members of the Washington DC chapter of the International Netsuke Society (INS). Their door was always open to fellow collectors, who regarded Jack and Helen as the ultimate resource for information on netsukes. Some traveled from as far away as Europe and Hawaii to visit with the Mangs and view their fabled collection.

In an Isabel Cunningham article about the Mangs, which appeared in a 1983 issue of the INS Journal, the author wrote that the couple “combined discriminating taste, conscientious scholarship, delight in sharing with others, and never-failing interest in all aspects of netsuke collecting.”

Quinn’s Auction Galleries’ president, David Quinn, said the Mangs spotted their first netsuke in a New York shop window in 1950. “They were fascinated by the exquisite workmanship on such a relatively small piece. They bought a gold lacquer inro cord with netsuke on that particular day, and a 60-year collection was born,” Quinn said.

The auction catalog’s cover lot is an 18th-century Kyoto school ivory netsuke of a crouching baku – a mythical beast whose name means “eater of bad dreams.” The carving incorporates all of the baku’s distinctive physical characteristics – a long snout, two tusks, clawed feet and the body of a horse with flaming posterior. Measuring 2¾ inches long, it is expected to make $15,000-$20,000 at auction.

A latter-18th-century ivory netsuke of a dragon emerging from an alms vessel amid a vapor cloud was fastidiously carved to render the effect of a heavily scaled body from neck to tail. The piece was purchased from Joseph U. Seo in 1955 and will appear at Quinn’s auction with an estimate of $8,000-$10,000.

Another dragon netsuke that collectors may find appealing is a carved-wood example that clutches a white glass ball in its claws. Created circa 1833-1843 by Kaigyokudo of Osaka, Japan, it is artist-signed under the tail and commands a presale estimate of $7,000-$9,000.

A mid-18th-century bone netsuke, also Kyoto school, depicts a perplexed older Immortal, known as a sennin, grasping a mokugyo (drum) and looking skyward in the character’s typical pose. The piece comes with provenance from the collection of F. Meinertzhagen, who described it as “probably the best netsuke in bone that I have seen.” Part of the Mang collection since 1959, it carries an auction estimate of $12,000-$18,000.

Carved in the mid-19th century by Yoshinaga Miura Kanjuken, an ivory netsuke of a standing Dutchman with a karako (small boy) hoisted onto his right shoulder is 3 3/8 inches tall and artist-signed on the right leg. The Mangs purchased the piece from R. Koscherak in 1951, while their collection was still in its infancy. Estimate: $1,800-$2,200.

A most unusual wood netsuke simulates a grouping of five realistically carved turtles climbing over a larger sixth turtle that forms the base for the piece. Crafted by Hoju in the mid-19th century, the netsuke is artist-signed on an inlaid oval ivory plate. It comes to auction with an estimate of $1,800-$2,000.

A wonderful ivory netsuke of the Lunar Hare, attributed to Shigmasa No. 3, Osaka, dates to the second half of the 19th century. The red-eyed hare is depicted as though climbing up the side of the moon, grasping a rice pounder in its left paw. Provenance: Sotheby’s London, Dec. 20, 1967, Lot 374. Estimate: $2,500-$3,000.

On the subject of hares, Quinn said a much wider audience has become aware of netsukes since the publication of the New York Times bestseller The Hare with Amber Eyes. “We see new bidders entering the competition whenever a long-held collection of netsukes comes to auction. It will be interesting to see if the popularity of this book adds a new level to the competition already expected for this legendary collection,” said Quinn.

Additionally, netsuke books from the Mangs’ personal library will be offered in Waverly Rare Books’ Dec. 6 evening sale. A selection of inro and ojime with a few netsukes attached will be featured in the Asian portion of Quinn’s Dec. 8 Decorative Arts sale. 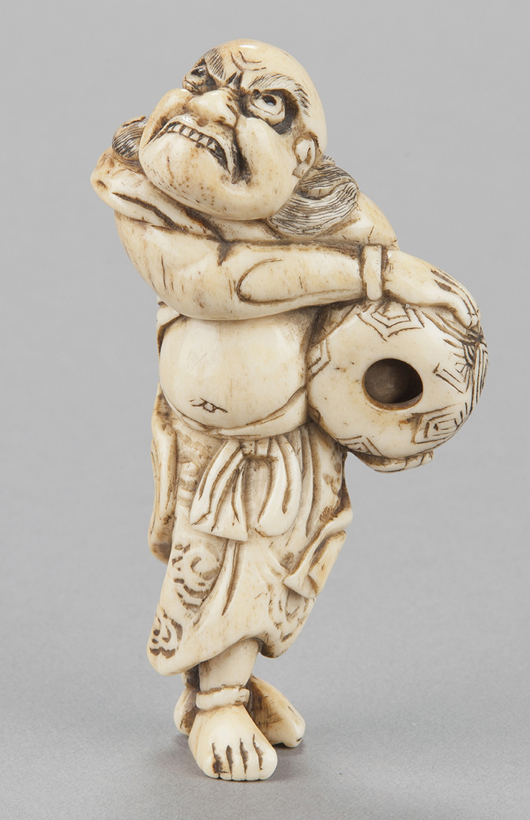 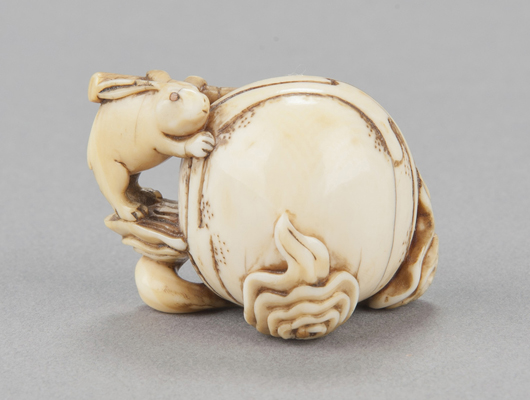 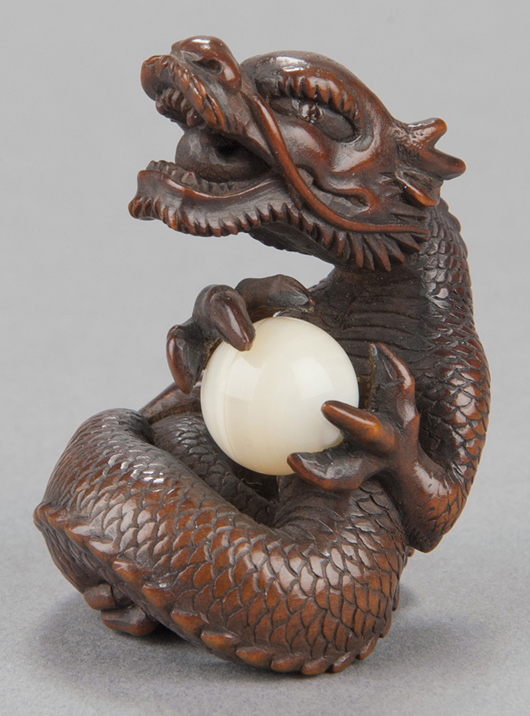 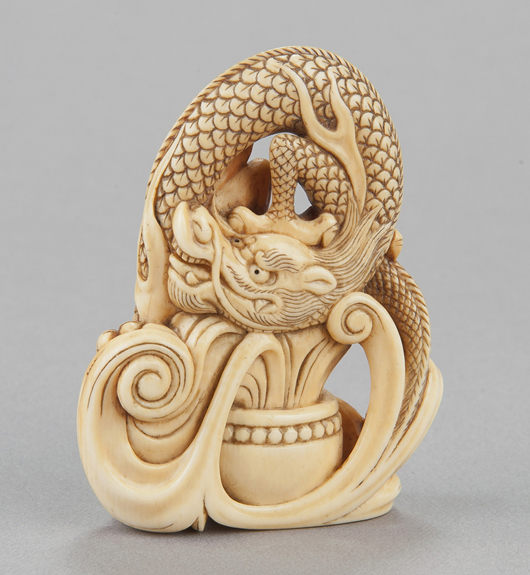 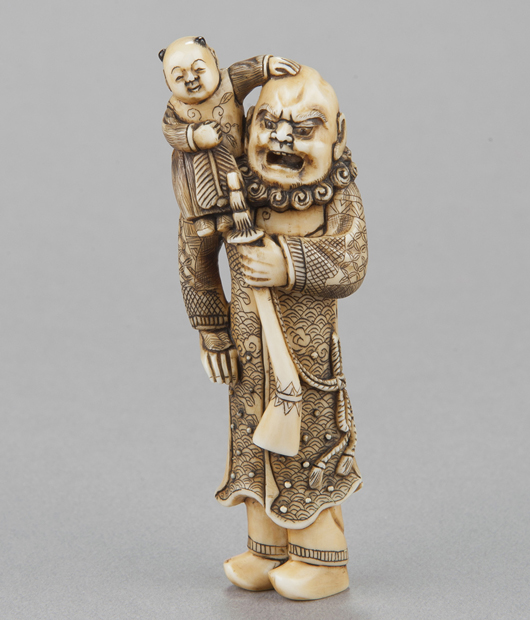 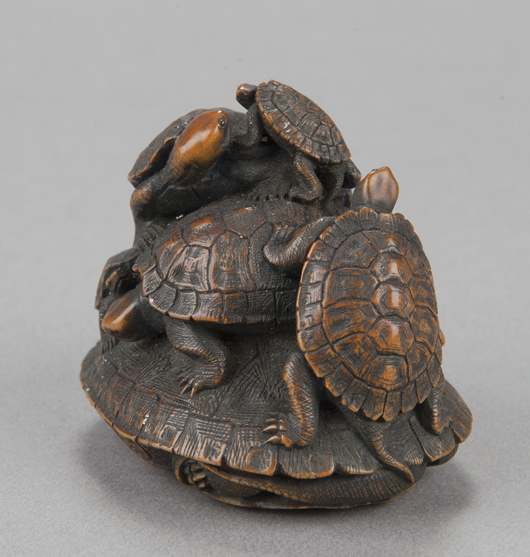