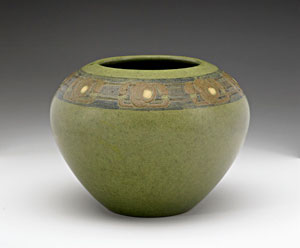 LAMBERTVILLE, N.J. – Rago’s has announced plans for its 2009 Arts & Crafts auction season, outlining three different types of sales with prices at all levels of collecting. While showcasing the top-notch Arts & Crafts and other early 20th-century design in a single, major sale in June, Rago’s will also offer Arts & Crafts period furniture, ceramics, glass, metal and accessories in January, February, August and September events in 2009.

The most important of these sales, in June, will be a two-day, 1,000-lot auction featuring the best material accumulated over the course of the year. Already secured for that auction is Tiffany lighting (including a Venetian table lamp from a private estate), a collection of early Moorcroft ceramics, an important and large Marblehead vase with roses, and a fine assortment of Gustav Stickley furniture including a rare grouping of high-back spindle chairs. This sale is aimed at collectors and dealers looking for high-end property and rarities.

The newest auction of the series is Real Modern: Stickley to Starck, a two-day sale with a session each for Arts & Crafts and 20th-century Modern material. The first of these sales takes place the weekend of February 14-15. Each day will showcase nearly 500 lots, with 20th-century Modern selling on Saturday, and Arts & Crafts on Sunday, each with selections of furniture, ceramics, glass, metal, and accessories. What separates this weekend event, aside from spanning the 20th century, is the emphasis on more moderately priced items (mostly in the $1,000-$2,000 range).

Already on hand for the Arts & Crafts portion of the sale are a lovely collection of European pottery and glass, including Moorcroft, Rozenburg, an early Gallé charger, and a rare Mettlach charger. European glass includes a jeweled Daum bowl, Lalique Druides, Avalon, Canards, and Enfants, among others.

There will be a terrific and rare fireplace surround of American Encaustic tiles featuring owls and bats, and a large fountain of Batchelder tiles.  The metalwork offered is highlighted by a small but rare Shreve tray in oak and hammered silver, along with several hanging and table lamps by various makers. Furniture highlights include a complete L. & J.G. Stickley dining room set featuring an oversized china cabinet with cupboard doors below, and hammered copper strap hinges.

Arts & Crafts and early 20th-century property will also find a home in Rago’s bi-annual Discovery sales. Held in January and August of 2009, Discovery sales are absolute auctions, with hundreds of lots sold at no reserve. The January sale includes furniture by Stickley, Roycroft, Limbert, Harden and contemporary pieces of Stickley by E.J. Audi; pottery and smalls by Ohr, Teco, Marblehead, Rookwood, Fulper, Amphora, Moorcroft and Van Briggle, as well as Roseville and Weller. Heintz & Roycroft metal, Bradley & Hubbard and Handel lighting as well as art glass by Lalique, Daum, Durand and Steuben round out more than 300 lots from the period.

All auctions will be held live and on site, with bidding by phone, absentee, in-room and live online through LiveAuctioneers (liveauctioneers.com).