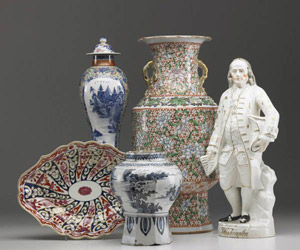 LAMBERTVILLE, N.J. – In the mid 1980s, Joseph Stanley, a noted New Hope, Pa., antique dealer, closed his shop. The mansion known as Cintra, where he lived and worked, was shuttered to the public, although its expansive rooms, 12-foot-high walls and parquet floors were still fitted out with centuries of art, antiques and rugs.

In earlier times, Stanley and his partner had hosted many parties at Cinta, traveled widely on buying trips and guided antiques tours in England. Now the sign on York Road reads “Closed.” Stanley lived there quite privately until his death in late 2008. The rooms of his living quarters and shop remained filled, the last incoming shipments still in their crates.

All of the property from Cintra will be auctioned at Rago’s over the course of 2009. The first sale, on Friday, March 27 at 2 p.m. EST, will disperse Stanley’s 18th- and 19th-century Chinese export, European and Asian porcelains. Fine art, furnishings and other decorative arts will follow in August 2009.

“There is so much in this shop and home that we barely have room to turn around without uncovering something unseen and of real interest,” said Tom Martin, head of the Estates & Discovery Auctions department at Rago’s. “We won’t be finished the work until spring. Who knows what we’ll turn up for August, in addition to what we have readily at hand? You rarely see an estate this special.”

A few of the highlights in the March 27 auction include:

The mansion known as Cintra was built by William Maris, who arrived in New Hope, Pa., shortly after the War of 1812. He built the “yellow pebble-dashed house on the York Road” in 1816 from plans purchased after an 1814 visit to the Portuguese castle of Cintra. He took from these plans a wing which particularly attracted his admiration for its thick walls, coffered passageways and windows, double doors with massive locks, and octagonal hall flanked by large rooms in the wings on either side.

Cintra was purchased by Richard Randolph in 1830, who sold it to his brother-in-law, Elias Ely, in 1884. (The Ely family has resided in New Hope since the 17th century, and was granted land by William Penn.) Cintra remained in the Ely family into the 20th century.

George Ohr pottery: Method in his madness
Scroll to top